To Stir or Not to Stir? 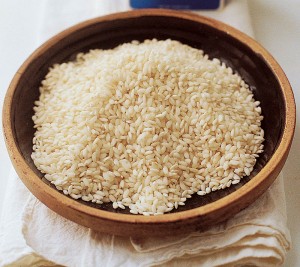 The arrival of rice in Italy was introduced by the Arabs during their invasion of Sicily, along with oranges, lemons, sugar cane and pistachio nuts. Some historians, also, claim that saffron made its appearance around the same time.  Urban legend tells of a young apprentice, called Valerius, who was supposed to have invented the yellow risotto recipe that Milan is so famous for, now called, “Risotto  alla Milanese”. He was put in charge of making the stained-glass window that was to adorn the Cathedral Duomo Di Milano. While he worked, many of the townspeople made fun of him, giving credit to the herb saffron for the beautiful colors showcased in his artwork. As a result, Valerius became angry and devised a plan of retaliation. During his master’s wedding, he added an excessive amount of saffron to the rice being served at the affair.  He hoped his action would ruin the festivities, but instead the rice received great reviews and so the yellow risotto recipe of Milan became famous.

Italy is the leading producer of rice in Europe, with the majority of it being grown in the Po River Valley. Lombardy is home to the best rice growing area, Lomellina, while Piedmont and Veneto also have bountiful rice harvests. Rice thrives so well in these areas that first courses of risotto are more common than pasta. That is not to say that other regions of Italy do not eat rice, as there are wonderful rice recipes throughout Italy..

Italy grows mostly short, barrel shaped rice that is different than the long-grain rice that is usually boiled or steamed in other parts of the world. Among this type of rice are four categories based on grain size: comune, semifino, fino, and superfino. The superfino rice is the type most used for risotto, with Arborio being the most recognized outside of Italy. However, Venetian cooks prefer the Carnaroli variety, which was invented in the 1950’s. Baldo is another variety well-known for making excellent risotto.

Risotto is made with great care, braising the rice and allowing it to absorb the cooking liquid, usually broth. The special rice used in the preparation lends its starches to the cooking liquid, giving the risotto a rich consistency that in some ways, resembles a heavy cream sauce. The actual braising of the rice is a standard procedure starting with the rice being toasted in a soffrito (chopped vegetables such as onion, garlic, carrots and celery), before broth is ladled in slowly. What makes each risotto unique is the local ingredients that give the dish its character.

In Piedmont it is not unusual to find risotto with truffles or made with red Barolo wine. In Venice, seafood risotto is a mainstay and risotto with sauteed eels is a Christmas tradition. Risotto is completely versatile, and goes just as well with cuttlefish ink (Nero di Sepia) as with Prosciutto di San Danielle or with butter and Parmigiano-Reggiano (added just before serving – Risotto Mantecato) or with wildfowl like quail (Risotto con la Quaglie).

Italian rice is not just limited to risotto.   One of the more famous of the non-risotto rice dishes is Minestrone alla Milanese, a hearty vegetable soup, which makes use of Lombardy’s abundant rice. In Venice,  Peas and Rice (Risi e Bisi) is a popular dish that is like a soup made with rice and peas, but thick enough to eat with a fork. Riso al Salto is a great way to use up leftover risotto – pressed into patties and fried in butter. Another delicious way to eat leftovers is to add the rice to eggs for an Omelette di Riso.  Arancini (little oranges) are fried rice balls with a filling, usually of cheese, and they are a popular snack found in Italian cafes and bars. Rice stuffed tomatoes are a traditional antipasti  around Naples. Rice is also useful in desserts, such as Sicily’s Dolce di Castagne e Riso – a rice pudding flavored with chestnuts.

It is a common belief that risotto must be stirred constantly while you’re making it. Outrage rippled through the masterclass on rice when Gabriele Ferron, a well known chef from Verona,  first presented his ‘no-stir’ method of cooking risotto many years ago. How could anyone call a dish a risotto, if you haven’t slaved over the pot, stirring constantly as you add stock? Never mind the fact that his “revolutionary” method freed the cook from the stove and produced an excellent rendition of this famous dish.

Wonder if all that work is really necessary!
The editors of bon Appetit sampled recipes for stirred risotto and “quick n’ easy” no-stir risotto and compared the results. The verdict? It depends on what you like!
Risotto made in the traditional way, adding the broth one cup at a time and waiting for it to be absorbed so that the starch from the rice dissolves into the sauce, turns it silky and creamy.
No-stir recipes where all the broth is added at once do not wind up with the same sauce-like consistency. The editors of Bon Appetit say they turn out more like pilaf.  It’s still full of flavor and definitely a fine method to use if you don’t want to be tied to the stove, but the results aren’t nearly the same.
Both methods are definitely edible and have their own merits, so it comes down to what you have time for and what you like.

Chef Simon Humble, who won a silver medal in an international rice competition in Italy, employs the ‘no stir” method at his Melbourne restaurant, Tutto Bene.
His basic principles of the ‘no stir’ method are summarised as follows:

Why don’t you give this method a try.  I don’t agree with Bon Appetit about the outcome of the no stir method, because whenever I have used this method, the dish is creamy and rich tasting.

The Almost No Stir Method For Risotto

Heat the broth and water in a pot and keep warm.
In a heavy-bottomed Dutch Oven pan with a lid, heat the oil and cook the shallots and garlic over medium heat until it is translucent.
Add the rice and stir to coat well.
Add the wine, and cook over medium heat until the wine is almost absorbed.
Reduce the heat to medium low, and add 5 cups of the hot liquid. cover the pot.

Cook for about 18 minutes stirring just twice during this period or until the rice is just al dente and most of the liquid is absorbed.
Add 1/2 cup of broth and stir constantly for 3 minutes until the rice is creamy, add the remaining ½ cup of broth if the risotto isn’t loose enough.
Add the finishing ingredients and mix well.
Serve immediately offering additional grated cheese at the table.
Adapted from Cooks Illustrated 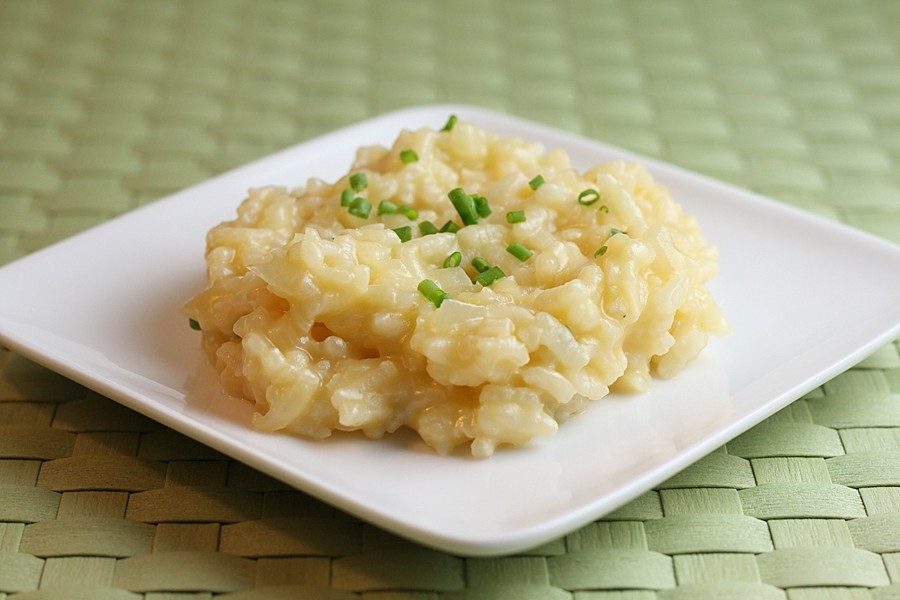 Stir in any one of the following ingredients to the almost finished dish:
Heat 1 tablespoon of the olive oil over medium-high heat in skillet. Sear the asparagus just until beginning to brown, about three minutes.


1 butternut squash (medium, about 2 pounds), peeled, seeded cut into 1/2-inch cubes (about 3 1/2 cups).  Place the squash on a baking pan and toss it with 1 tablespoon olive oil, 1/2 teaspoon salt and 1/2 teaspoon pepper. Roast for 25 to 30 minutes, tossing once, until very tender. Set aside.

2 cups shrimp and/or scallops cut in half  and sauteed  in 1 tablespoon olive oil and 1 minced garlic clove.

2 cups mushrooms such as shiitake, chanterelle, or oyster mushrooms, cleaned, trimmed, and cut into half inch pieces and sauteed in 1 tablespoon of olive oil.

When You Have Leftover Risotto, Make Risotto Cakes

Combine the egg substitute, the risotto and 1/2 cup panko crumbs and mix well.
Pour the remaining breadcrumbs onto a  shallow dish.
Form the risotto mixture into 6 to 8 patties (depending on how large you want to make them) and coat lightly with the remaining panko crumbs.
Place the risotto cakes on the prepared pan. Bake 30 minutes, turning the cakes over half way through the baking time.
Serve each with a tablespoon of pesto. 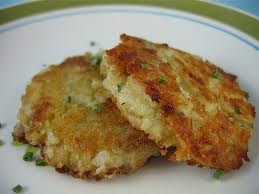