A bit of pizza history:

With pizza being so popular and abundant, one might wonder where did it all start?  A little history checking tells us that pizza was considered a peasant’s meal in Italy for centuries, but we cannot say who invented the very first pizza pie. Food historians agree that pizza-like dishes were eaten by many people in the Mediterranean including the Greeks and Egyptians. In 16th century Naples, a flatbread was referred to as a pizza. A dish of the poor people,  it was sold in the street and was not considered a kitchen recipe for a long time. Before the 17th century, the pizza was covered with red sauce. This was later replaced by oil,  tomatoes (after Europeans came into contact with the Americas) and fish.
However, the modern pizza has been attributed to baker Raffaele Esposito of Naples. In 1889, Esposito who owned a restaurant called the Pizzeria di Pietro, baked what he called “pizza”,  for the visit of Italian King Umberto I and Queen Margherita. Esposito created the “Pizza Margherita,” a pizza garnished with tomatoes, mozzarella cheese, and basil, to represent the colors of the Italian flag. He was the first to add cheese.
The first pizzeria in North America was opened in 1905 by Gennaro Lombardi at 53 1/3 Spring Street in New York City.  The first “Pizza Hut” a chain of pizza restaurants, appeared in the United States during the 1930s. Frozen pizza was invented by Rose Totino.

A little trivia for you:

Americans eat approximately 350 slices of pizza per second. And 36 percent of those pizza slices are topped with pepperoni slices, making pepperoni the number one choice among pizza toppings in the United States. However, in India pickled ginger, minced mutton, and paneer cheese are the favorite toppings for pizza slices. In Japan, Mayo Jaga (a combination of mayonnaise, potato and bacon), eel and squid are the favorites. Green peas are popular in  Brazilian pizza shops and Russians love red herring pizza.

Pizza has the potential to be healthy but, unfortunately, has been ruined by the fast food industry.  “Fast food pizza” is unhealthy because of its ingredients. Most pizza is made on a white crust made from processed and bleached flour. These refined or processed grains are stripped of most of the healthy nutrients in the name of taste. You’re left with is a grain that contains a lot of empty calories but little in the way of any nutrients such as vitamins, minerals or fiber. “Fast food pizza” is also loaded with cheese, fatty meats and salt, all of which can increase your risk for cardiovascular disease. Pizza remains one of the most popular foods in our culture and if you love it, don’t stop eating it, simply make it healthier.

My Family’s Love Affair with Pizza

My mother made pizza just about every week and she made the dough herself, by hand, without the help of an electric mixer. My grandmother did the same thing and I can still visualize her standing over the dough and kneading it back and forth on the table. They both used the same recipe, the one they had always used; one that was probably in the family going way back in time. The ingredients they used were all-purpose flour, yeast, water, salt and shortening.

For years I made pizza the same way. My husband and my children were crazy about pizza, so I made it regularly.  In fact, if I don’t have pizza available weekly,  my husband is blue. Again, as time passed, and I became aware of what constitutes a healthier diet, I began to experiment with different dough recipes until I found a pizza crust that we really liked and, one that made us forget the old family recipe.  I also wanted to make the process a whole lot easier than most of the recipes I tried. If you live in a metropolitan area, you will be able to find prepared whole grain pizza dough, but if you cannot find it where you live, then I hope you will give my recipe a try.

How can you make it healthier?

The best way to accomplish this is to make pizza at home and use the following suggestions.

Use a whole grain crust. You can purchase a pre-made whole wheat pizza crust, or make your own by substituting whole wheat flour for part or all of the white flour in your pizza dough recipe. Whole grains add fiber which will keep you feeling full longer and are important for a healthy digestive system. You can also add flax-seed and wheat germ to your pizza dough. Flaxseed and wheat germ will add omega 3 fatty acids, fiber and a wide variety of other vitamins and minerals into your pizza with little change in taste or texture.  Thin crust has fewer calories than thick crust.

Use lots of tomato sauce because it is an excellent source of  lycopene,  a powerful antioxidant that may help to prevent disease.

Although cheese is an excellent source of calcium, a lot of the calories in a pizza come from the cheese. Use half the amount of cheese, than you are used to or choose a lower-fat type of cheese (such as skim mozzarella) to cut calories and saturated fat.

Pepperoni and sausage are high in fats, and processed meats are associated with stomach and colorectal cancer. Choose lean topping options, such as chicken or low-fat ground beef or turkey pepperoni or skip the meat altogether and make it vegetarian.

Load the pizza up with vegetables, since they are nutritious and low in calories. Some delicious choices include sun-dried tomatoes, onions, broccoli, spinach, olives, spinach, bell peppers, roasted red peppers and mushrooms. 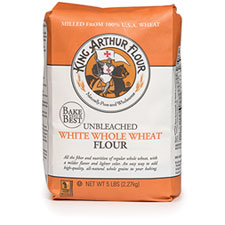 Tip:  Start this recipe about an hour before you want to make your pizza.

In the bowl of your stand mixer, combine all of your ingredients.

Using the paddle attachment from your mixer, stir on speed 2 until a loose dough forms.

Attach the dough hook to your mixer and allow the mixer to knead for 8 minutes on speed 2.

After the kneading is finished, using floured hands gently form the dough into a ball. Place in a greased bowl,  cover with a damp towel and allow to rise for 45 minutes to 1 hour.

After the dough has risen, divide the dough in half (I like to weigh the dough a scale). 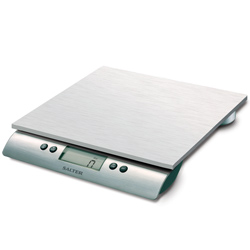 If you are going to make only one pizza, then place the second ball in a ziplock freezer bag and freeze for another dinner.

Preparing the Pizza Dough for Baking:

Spray a large pizza pan with cooking spray and sprinkle cornmeal on the bottom of the pizza pan.
Pick up the risen dough and gently shape into a circle and place it in the pizza pan.  Oil your fingers and stretch the dough to the rim of the pan. If the dough starts to resist stretching, allow it to rest for a few minutes before continuing.

Place an oven rack in the lowest position of the oven and preheat the oven to 450 degrees F. Place pizza toppings on the dough and bake for 20 -25 minutes.

Some of our favorite pizza toppings

Mix the spinach with the ricotta cheese.
Layer the ingredients on the pizza dough starting with the mozzarella cheese, then spread the ricotta spinach mixture and sprinkle with salt, pepper and oregano.  Scatter the feta over the top.  Bake.

Brush the pizza dough with 1 tablespoon olive oil.  Place the mozzarella slices on the dough and layer the tomato slices over the top.  Sprinkle with salt and drizzle with the remaining 2  tablespoons of oil.  Bake.  Scatter the basil leaves over the top of the pizza after it is removed from the oven.

In a medium saucepan, heat oil and add garlic and dried herbs.  Saute for 30 seconds and add the rest of the ingredients. Simmer, uncovered, 30-40 minutes until the sauce thickens.

Place 8 oz. sliced mozzarella on top of the dough in the pan. Cover with sauce.  Sprinkle parmesan cheese on top and bake as directed above.  You can also add other ingredients of your choosing on top of the sauce. 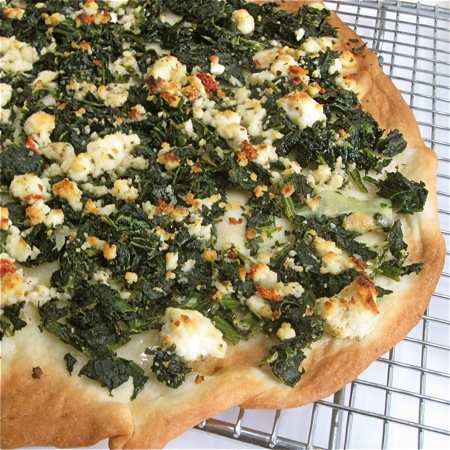 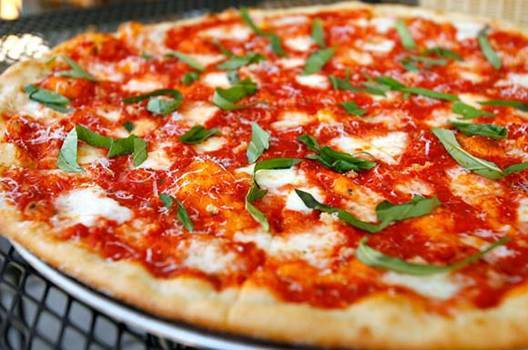 I want to share with you a wonderful source for making bread quickly and storing the dough in the refrigerator for when you need it.  The authors have published three books in this series.  The one mentioned below is about making pizza.

Artisan Pizza and Flatbread in Five Minutes a Day 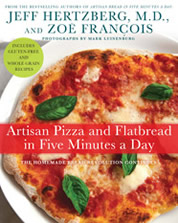 Jeff Hertzberg  & Zoë Francois wrote, Artisan Bread in Five Minutes a Day (2007) so that baking homemade bread and pizza would be easy enough for people struggling to balance work, family, friends, & social life. They refined their methods for refrigerator-stored artisan dough while juggling busy careers and families.  By 2011, “Artisan Bread” had over 330,000 copies in print!