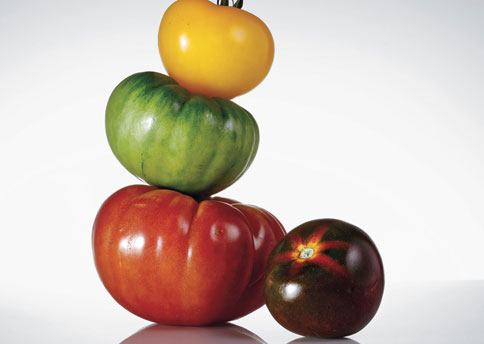 According to the U.S. Department of Agriculture, Americans eat more than 22 pounds of tomatoes every year. More than half this amount is eaten in the form of ketchup and tomato sauce. There are more than 4,000 varieties of tomatoes, ranging from the small, marble-size cherry tomato to the giant Ponderosa that can weigh more than 3 pounds.

Tomatoes do not become more flavorful and develop adequate flavor unless allowed to ripen on the vine. They will change color and soften, but the sugar, acid, and aroma compounds are locked in once the fruit is taken off the vine. So, choose vine-ripened tomatoes, preferably locally grown, because the less the tomatoes have to travel, the more likely they were picked ripe. Seek out locally grown tomatoes whenever possible. They may not be as “pretty” as store bought, but beauty, but taste is what you are after.

Select tomatoes that are firm, glossy, smooth, plump, heavy for their size, and free of bruises. Avoid tomatoes that are overly ripe and soft. Fragrance is a better indicator of a good tomato than color. Use your nose and smell the stem end. The stem should retain the garden aroma of the plant, if it doesn’t, your tomato will lack flavor. Since fresh tomatoes are summer fare and off-season tomatoes are rarely flavorful, substitute canned Italian plum tomatoes in cooked dishes. Cook for ten minutes to reduce the liquid and enhance the taste. DO NOT REFRIGERATE FRESH TOMATOES! Cold temperatures make the flesh of a tomato pulpy and destroys the flavor. Always store tomatoes at room temperature stem-end down. This prevents air from entering and moisture from exiting its scar, prolonging shelf life.

To ripen, place green or unripened tomatoes in a brown paper bag and place in a dark spot for three or four days, depending on the degree of greenness. The bag will trap the fruit’s ethylene gas and encourage ripening. Do not put tomatoes in the sun to ripen – that will soften them.

How To Peel Fresh Tomatoes:

Contrary to popular belief, tomatoes have been grown as a food since the 16th century, though they have in various times and places been regarded as both poisonous and decorative plants. The Italian name for the tomato is pomodoro, meaning “apple of love” or “golden apple,” because the first tomatoes to reach Europe were yellow varieties. Tomatoes were not cultivated in North America until the 1700s, and then only in home gardens. In colonial America (1620-1763), tomatoes were thought to be poisonous and were grown as an ornamental plant called the “love apple.” The odor of the leaves made people think it was poisonous. 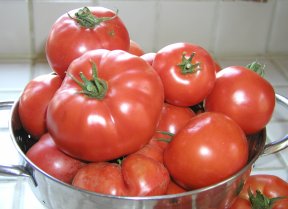 Thomas Jefferson was raising tomatoes by 1782. Most people of that century paid little attention to tomatoes. Only in the next century did they make their way into American cookbooks, always with instructions that they be cooked for at least three hours or else they “will not lose their raw taste.”  Jefferson was a pioneer grower of “tomatoes.”  Beginning in 1809, he planted tomatoes yearly in his vegetable garden and  Jefferson’s daughter, Martha, and granddaughters, Virginia and Septimia, left numerous recipes that involved tomatoes, including gumbo soups, cayenne-spiced tomato soup, green tomato pickles, tomato preserves, and tomato omelettes. Tomatoes were also used for presidential dinners during Jefferson’s time, which helped this modern garden favorite get off to a good start.

Here are a few recipes for you to try when tomatoes are at their best. 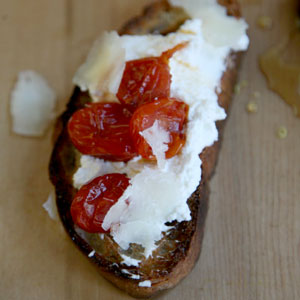 1.  Place tomatoes in a small oven proof skillet, drizzle with olive oil, season with salt and pepper to taste, set 5″ under the broiler, and leave until the tomatoes have burst and started to release their juices, about 8 minutes. Set aside.
2. Heat a stove top grill pan over medium heat. Cut bread into 1/2″-thick crosswise slices. Drizzle the bread with olive oil. Grill bread slices until both sides have grill marks and slightly charred crusts, 4–5 minutes.
3.  While hot, rub bread with garlic. Spread 1 tablespoon of the ricotta on top of each toasted slice.
4.  Spoon cherry tomatoes on top. Garnish with thin shavings of parmesan cheese and black pepper.
SERVES 4–6

Serves: 6
The natural nuttiness of farro matches beautifully with the saltiness of the olives and the sweetness of the broiled ‘Roma’ tomatoes. Serve with a lightly chilled fruity red wine. To save time, substitute a quick-cooking grain or pasta such as couscous, orzo, or instant brown rice for farro. 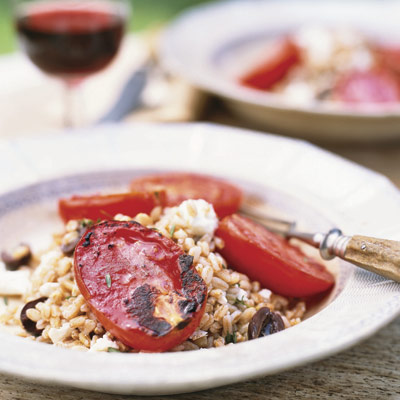 When tomatoes are oven-roasted at a low temperature, their flavor becomes very concentrated. When they’re then pureed, even dead-of-winter plum tomatoes make a delicious soup that tastes like summer. 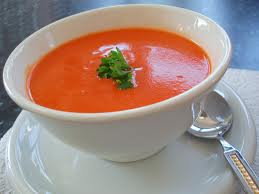 Chickpeas with Tomatoes and Sweet Peppers 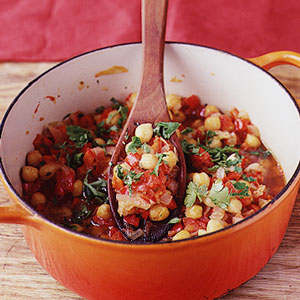 Put chickpeas in a medium bowl and add enough cold water to cover by 2”.  Set aside to soak for at least 4 hours, or overnight, then drain.
Place chickpeas in a medium pot, add enough cold water to cover by 3”, and bring to a boil over medium-high heat. Cover, reduce heat to medium, and cook until chickpeas are tender, about 1 1/2 hours. Drain and set aside.
Heat oil in a heavy medium pot over medium heat. Add bell peppers, chiles, onions, and garlic and cook, stirring often, until vegetables have softened, about 10 minutes. Add tomatoes, basil, oregano, half the parsley, and salt and pepper to taste. Cover, reduce heat to medium-low, and simmer for about 30 minutes. Add chickpeas and simmer until heated through, about 10 minutes. Adjust seasonings and serve hot or cold, sprinkled with remaining parsley. 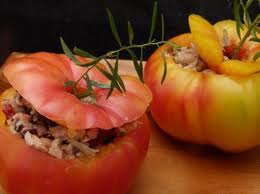 Cut a 3/4-inch slice off the stem end of each tomato and reserve. With a spoon, carefully scoop out the pulp and discard. Sprinkle the inside of the tomatoes with salt and place the tomatoes upside down on paper towels to drain for 1 hour.
In a medium bowl, mix together the capers, pine nuts, parsley, oregano, olive oil, and lemon juice. Add the flaked tuna and mix together gently. Season to taste with salt and pepper.
Sprinkle the inside of the tomatoes with pepper. Distribute the tuna evenly among them, cover with the reserved tops, and serve.
NOTE: These can be made several hours in advance and refrigerated; bring to room temperature before serving.

Butterflying the chicken — splitting each piece in half and fanning it open like a book — creates two layers to hold tomato and basil.
Serves 4 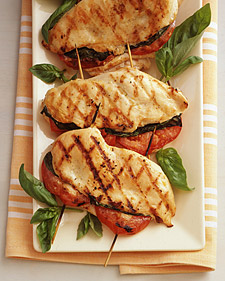