There Is More To Italian Rice Than Risotto 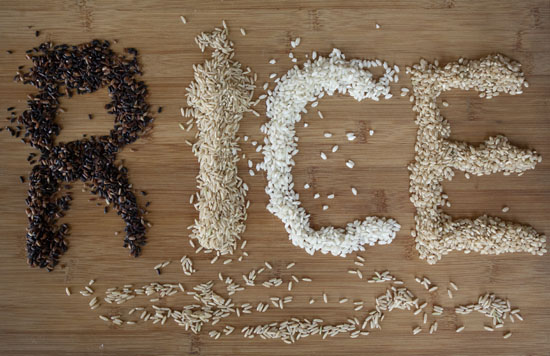 There is no food richer in meaning than rice: life, wealth, and prosperity accompany this grain, a cornerstone of Italian cuisine. The land where it is grown is like a checkered sea: a spectacle of colors and reflections that tradition turns into delicious dishes.

Rice was a common ingredient, actually a cereal, in ancient China and India. According to archaeologists, rice originated fifteen thousand years ago on the Indian side of the Himalayas. Rice is an important ingredient for the populations of the Far East who base their diet on this food. Alexander the Great introduced rice to the Persians and then scientists brought it to the Middle East. Over the centuries, rice finally made its way to Europe, first in Greece, then in the Roman lands, where it was never cultivated, but imported. Rice remained an expensive food for Western Europeans who used it in small doses as a cosmetic or to fight against intestinal disease or fevers. Wealthy Romans used rice flour to make a cream that they would spread all over their faces and necks to soften and brighten their skin. 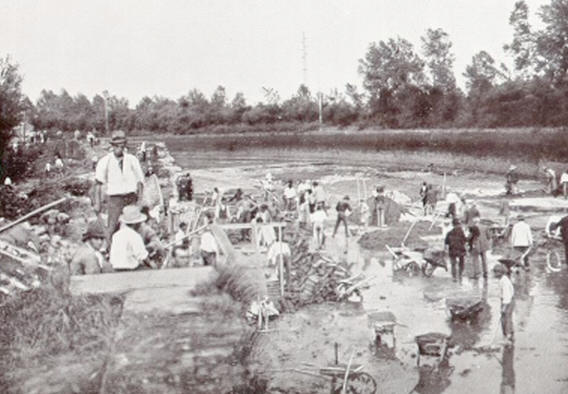 The most spectacular period of progress of the Italian rice cultivation began in the middle of the last century, when Vercelli farmers built one of the most efficient irrigation systems.

Today. Italy is the leading producer of rice in Europe, with the majority of it being grown in the Po River Valley. Lombardy is home to the best rice-growing area, the Lomellina, while Piedmonte and Veneto also have abundant rice harvests. Rice thrives so well in the Po Valley that first courses of risotto are more common than pasta and are a great way to serve whatever is in season, from seafood to wild mushrooms (such as Porcini) to meat and game. Anyone who has had a perfectly prepared risotto dish knows just how serious the people of this area take their rice. That is not to say that other regions of Italy do not eat rice, as there are wonderful recipes for using the many varieties grown throughout Italy. From soups to desserts, Italian rice is well utilized.

Rice, like eggs, comes in different sizes and grades. Italian rice is graded according to length (short or long), shape (round or oval) and size (small, medium or large), as well as wholeness (broken grains are appropriately downgraded). Italy grows mostly short, barrel-shaped rice that is different from the long-grain rice that is usually boiled or steamed in other parts of the world. The four main categories based on grain size are comune, semifino, fino, and superfino. The superfino rice is the type most used for risotto, with Arborio being the most recognized outside of Italy. However, Venetian cooks prefer the Carnaroli variety, which was invented in the 1950’s. Baldo is another variety well-known for making excellent risotto and classified as semifino.

I recently discovered nutty black rice that is grown in Piedmont in Italy. It has a chewy texture and the color is a standout on the dinner table. It is mostly served in salads, but it is equally good served warm, with drizzle of extra-virgin olive oil. I like to cook this rice in chicken broth and serve grilled shrimp on top. For another recipe to check out is Erica De Mane’s recipe on her website: http://ericademane.com/2008/11/05/my-black-rice-dream/

Italian rice is not just limited to risotto; one of the more famous non-risotto rice dishes is Minestrone alla Milanese. The city of Milan’s hearty vegetable soup makes use of Lombardy’s abundant rice. In the Veneto, Peas and Rice (Risi e Bisi) is a popular “wet” risotto that is like a soup made with rice and peas, but thick enough to eat with a fork. Riso al Salto is a way to use up leftover risotto – pressed into patties and fried in butter. Another frugal use of leftovers is to add the rice to eggs for an Omelette di Riso. Suppli and Arancini (little oranges) are fried rice balls with a filling usually of cheese; they are a popular snack found in Italian cafes and bars. Rice stuffed tomatoes make an excellent antipasto, especially with the large tomato varieties grown around the Bay of Naples. Rice is also used in desserts, such as Sicily’s – Dolce di Castagne e Riso – a rice pudding flavored with chestnuts.

When Italians are not making Risotto, they treat their rice like pasta. They immerse it in a large pot of water, boil it, salt it and strain it. Unlike many Asian and Indian rice varieties, Italian rice is never rinsed or soaked before use. The rice is sold in vacuum-packed bricks which stops the grains from rubbing against each other during transport (breaking and scraping the kernels). This unique packaging also keeps the grains “fresh” and ensures no debris or insects entered the bag after the rice was cleaned, aged and dried under the controlled conditions.

Arborio rice is great for most cold rice dishes, just be sure not to over cook it. 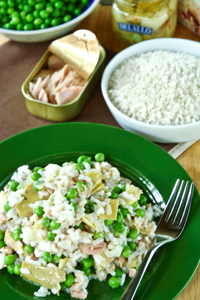 Bring a large pot of water to a boil. Add salt and rice, stir, and adjust heat to maintain a simmer.

Cook, stirring occasionally to prevent any grains from sticking to the pot, until the rice is just barely done, about 15 minutes. It will continue to cook as it cools.

Drain the rice in a fine mesh colander and spread it out on a baking pan brushed with olive oil to cool quickly.

Put the lemon juice in a small bowl. Season with salt and pepper. Gradually whisk in the olive oil.

In a large bowl, combine the cooled rice and any combination of ingredients from the list below. Toss. Pour the dressing over the salad (you may not need it all) and toss gently. Taste and adjust seasoning.

The following is a list of some of the classic ingredients you might want to add to your salad (sliced or cut into small cubes):

Add a green salad to round out the meal.

Beat eggs with salt and pepper in a medium bowl.

Heat a saute pan over medium heat, Add butter and let it melt. Pour eggs directly over the butter. Tilt the pan to spread the uncooked eggs in the pan. Put the remaining ingredients: rice, salami, cheese and onions in the center of the omelet.

Fold one side of the omelet over the ingredients and cook it for 4 to 5 minutes over low heat until the filling gets heated enough. Turn out onto a serving plate.

Minestrone with Tomatoes and Rice 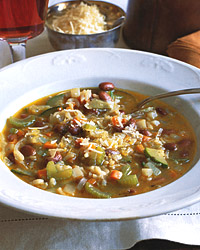 Heat the olive oil in a large nonreactive saucepan. Add the onion and red bell pepper and cook over moderately high heat, stirring occasionally, until softened and lightly browned, about 6 minutes. Add the carrot, potato, zucchini and yellow squash and cook, stirring often, for 5 minutes.

Add the rice to the saucepan and toss well to coat the grains with oil. Add the tomatoes, 1 teaspoon salt, 1/4 teaspoon black pepper, the crushed red pepper and 6 cups of water and bring to a boil over moderately high heat. Add the cauliflower, celery and peas and cook, stirring, until all the vegetables and the rice are tender, about 35 minutes. Season the soup to taste. Ladle the soup into bowls and serve with Parmesan. 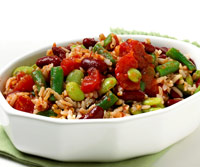 Bring water, salt, and butter to a boil in a medium saucepan. Add the rice, return to a boil, and then reduce the heat to the lowest setting. Cook until the rice has absorbed the water but still al dente, about 15 minutes. Pour into a bowl.

Bring milk, sugar, vanilla, and a few dashes of cinnamon to a simmer in the saucepan. Add the cooked rice and cook at a simmer over medium-low heat until the rice absorbs most of the milk and mixture starts to get thick and silky, about 10 to 15 minutes. Transfer pudding to a large bowl and cool to room temperature. Place in the refrigerator until cold and set. Serve with a dash of cinnamon. 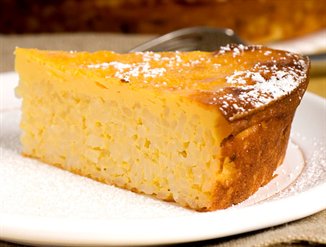 Spray a 9 inch round cake pan with cooking spray and flour the bottom.

In a large saucepan, add the milk, 2 cups water, sugar, grated lemon peel and a pinch of salt. Bring to a boil, then add the rice and cook until it has absorbed all the liquid, 25-30 minutes.

Remove the pot from the heat, stir in the butter and let cool.

Once the rice is cool, pour into an electric mixer bowl and add the eggs one at a time, mixing well after each addition. Stir in the almonds and citron. Mix well, then pour into cake pan.

Bake for 30 minutes. Take the cake out of the oven and brush with maraschino cherry liqueur. Slice the rice cake into serving pieces in the pan when cool. Dust with powdered sugar. 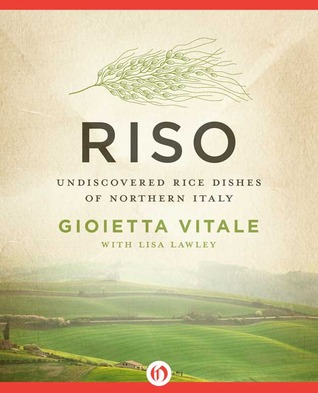 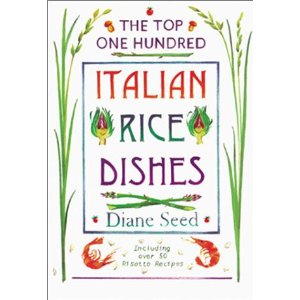