Soups with a Past

The cuisine of Italy changes as you move from region to region (even sometimes, from city to nearby city), with each area having unique recipes, specialties and culinary traditions. Most households in Italy reserve a meal or two for beans, just as they include specific days for meat, pasta or fish. Beans play an essential role in Italian cooking and, consequently, they are grown throughout the country. From Sicily in the south to Piedmont and Veneto in the north, various regions produce different kinds of beans, all of which are enjoyed by the Italian culture.

Beans contain a wealth of fiber both soluble and insoluble and contain more protein than any other vegetable; some beans even rival chicken or meat in protein content. Italy, also, boasts a rich tradition of bread soups, which was born out of necessity.  In the past people were much too poor to throw away stale bread, therefore, they had to devise ways to make it edible, such as working it into a soup.  Vegetables also play an important part in Italian soups. Soups are always made from scratch and include the freshest of ingredients, so the soup recipe can change, depending on what vegetables are in season. That is why you will often see recipes for Summer, Fall or Winter Minestrone. Pasta and rice are also common additions.

Soups in the Italian cuisine can be light, clear ones or thicker purees and even stews-like. Vegetable soups are usually served during spring and summer and somet are served cold. Hearty soups include minestrones, bean and sauerkraut soup, garlic bread soup, chickpeas and string-beans soups, Supa de Scigol, a specific Milanese onion soup, and Zuppa di Primavera, an Italian specialty made with vegetables, potatoes and bits of pasta. Meat is also used in Italian soups, especially pancetta. Beef, chicken and pork are used for thick hearty soups served with cream, while fish is used for lighter spicier soups served with pasta bits and onion rings. Most soups are accompanied by bread, and are seasoned with cheese and parsley, dill, basil or oregano.  The soup recipes included in this post are classic, hearty, country soups that have been part of the Italian cuisine for centuries. 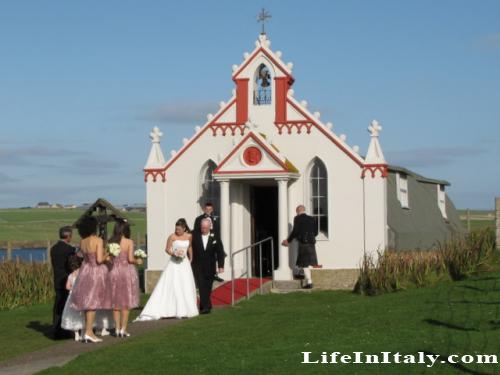 The Italian Wedding Soup, is one of those Old World dishes that comes complete with a colorful story. Serve a bowl, fill your head with images of folks in colorful native dress, dancing in circles to celebrate wedding joy while somebody plays the accordion and grandfathers smoking cigars and clapping their hands.

Great story, great image. There’s just one little problem. It is not really true. This hearty soup is Italian all right, but at least historically, it has nothing to do with weddings. With regional variations from Rome to Abbruzzi to Naples, this peasant dish earned the Neapolitan name “Minestra Maritata” or “married soup,” not because of any connection with weddings but simply because it brings together meat and greens in a happy marriage.

But the old name stuck, and over time – more in Italian-American culture than in the Old Country – it became the custom to serve it at wedding feasts, simply because the name prompted the tradition. It’s certainly not restricted to wedding meals and is often served during the holidays, on cold winter days, or just about any time you’re in the mood for a hearty, healthy soup.

Meatballs
Pour the milk over the bread crumbs and rest ten minutes. Add the ground turkey, garlic, parsley, Italian seasoning, Parmesan, egg substitute, ½  teaspoon salt, and 1/4 teaspoon pepper in a bowl and combine gently with a fork.
With a teaspoon, form 1 inch meatballs and place on a sheet pan lined with parchment paper.  Bake for 30 minutes, until cooked through and lightly browned. Set aside.

Soup
Heat the olive oil over medium-low heat in a large heavy-bottomed soup pot. Add the onion, carrots, zucchini and celery and saute until softened, 5 to 6 minutes, stirring occasionally. Add the chicken broth and bring to a boil. Add 1 teaspoon salt and the pasta to the simmering broth and cook for 6 to 8 minutes or until the pasta is tender.

Add the fresh basil and meatballs to the soup and simmer for 1 minute. Stir in the fresh spinach and cook until the meatballs and spinach are hot.  Adjust salt and pepper to taste. Ladle into soup bowls and sprinkle each serving with extra grated Parmesan. 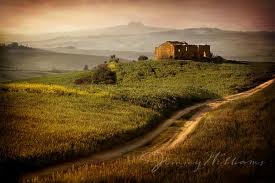 Most Tuscan food is rustic and hearty; nothing fancy. Grilled meats, brothy soups and beans are featured prominently, for example, the simple ribollita. While this is now a staple in restaurants in Tuscany and elsewhere, its roots are clearly in the home — or the farmhouse.
Classic ribollita is actually not one dish, but three. It started out as a minestra, a simple vegetable soup with greens and white beans. The next day, leftovers of of the minestra were extended with pieces of stale bread to make minestra di pane. On the third day, the soup was reheated (ribollita means “reboiled”).  As is typical with most soups, the flavors meld and improve with time. No matter which phase of its life you are consuming, be sure to serve it with a drizzle of very good, fresh, fruity olive oil.

In a thick-bottomed soup pot over medium heat combine the olive oil, celery, garlic, carrot, and onion. Cook for 10-15 minutes sweating the vegetables, but avoid browning them. Stir in the tomatoes and red pepper flakes, and simmer for another 10 minutes or so, long enough for the tomatoes to thicken up a bit. Stir in the kale, 3 cups of the beans, and 8 cups water. Bring to a boil, reduce the heat, and simmer until the greens are tender, about 15 minutes.

In the meantime, mash or puree the remaining beans with a small amount of water until smooth. Tear the bread into bite-sized chunks. Stir both the beans and bread into the soup. Simmer, stirring occasionally, until the bread breaks down and the soup thickens, 20 – 30 minutes. Stir in the salt, taste and add more if needed. Stir in the lemon zest.

Serve immediately, or cool and refrigerate overnight. Serve reheated the next day and finish each serving with a drizzle of olive oil and grated Parmesan cheese. 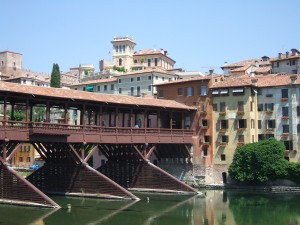 Fagioli, also known as” pasta fazool”, is a typical dish of the Italian table. In nearly every region, province and village you will find a version of this pasta and bean soup.
Pasta e Fagioli originated as a peasant dish, due to the wide availability of pasta and beans.  Italians, often, use legumes in their cooking, but they are most widely used in the regions of central Italy: Tuscany, Abruzzo, Umbria and Lazio.  However, the Veneto region, located in the northeastern corner of the boot, is well known for their version of Pasta e Fagioli. The traditional bean variety used in Pasta e Fagioli is the borlotti bean (also known as the cranberry bean).  Many specialty grocery stores, such as Whole Foods, sell cranberry beans.  Cranberry beans have a white and deep pink marbled pattern on their skins, and when cooked, their taste is similar to that of chestnuts, however, any white bean will be good in this soup.

This Italian soup–which has as many variations as there are cooks—is chock full of pasta, beans, and vegetables, making it a hearty one-dish meal. Serves 8.

In a 6-quart (or larger) soup pot over medium heat oil and add the onions, carrots and celery to the pot and cook until softened, 6 to 8 minutes. Add the garlic and rosemary and cook, stirring constantly, until fragrant, about 1 minute. Add the chicken broth, beans, tomatoes, 1/2 teaspoon salt and 1/2 teaspoon pepper.

Bring to a boil over high heat; reduce the heat and simmer 30 minutes.  Meanwhile, cook the ditalini according to the package directions and drain. Add to the soup with the parsley and crushed red pepper. Adjust salt and pepper to taste. Serve with garnishes: olive oil, cheese, basil and parsley Pappa al pomodoro is a traditional farmer recipe invented by peasant housewives in Tuscany to avoid wasting stale bread. The recipe was also made famous thanks to a hit song by Rita Pavone, “Viva la pappa col pomodoro” (1965)
Pappa al pomodoro – a rustic Tuscan tomato bread soup – is an excellent example of the Italian belief – “never throw anything away, especially bread!”

Most likely created in the Sienese hills, pappa al pomodoro can now be found throughout central Italy.  Authentic pappa al pomodoro requires the unsalted Tuscan bread as a base, and the extra virgin olive oil of the region.  Pappa al pomodoro is delicious cold or hot, and  is never eaten with Parmesan or any other cheese in Italy, but in the US cheese has become customary.
The preparation varies from family to family, and some variations may include onion, leek, carrot, celery, chili or rosemary. This version is more of a basic ‘pappa al pomodoro,’ which can be modified to suit your preference.

Heat the oil in a large soup pot over medium heat. Add the onions, carrots, fennel and garlic and cook over medium-low heat for 10 minutes or until tender. Add the ciabatta cubes and cook for 5 more minutes.  Add the tomatoes to the pot along with the chicken stock, red wine, basil, 1 teaspoon salt and 1 1/2 teaspoons pepper.

Bring the soup to a boil, lower the heat, and allow to simmer, partially covered, for 45 minutes.
Puree the soup with a hand blender or in the processor. Reheat and serve with the soup sprinkled with the toppings and olive oil drizzled over the top.