When my children were young they loved pasta, as long as it was smothered in tomato sauce. It was a not a good dinner, in their estimation, if I added a vegetable or two. For this reason, I developed a marinara sauce with the addition of finely chopped vegetables, which has been a success in our family for many, many years. In fact, now that my children are grown, they make the sauce the same way. They are also more sophisticated as adults and enjoy the vast possibilities pasta can offer, even when they include vegetables.

Even though summer has past with its bounty of fruits and vegetables, there are still plenty of options for cooler days. Adding vegetables to pasta doesn’t have to be complicated or follow a rigid guideline. Don’t be afraid to experiment with your favorite pasta dish, even if the recipe doesn’t call specifically for vegetables. Try adding a vegetable you like to the dish, and see if they work well together. 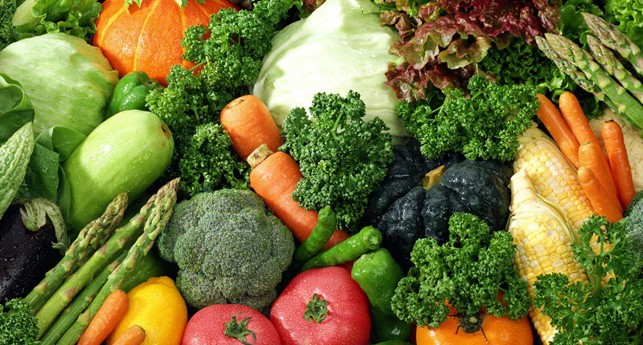 What can you find at the fall Farmers’ Market?

Winter Squash One fall’s favorite vegetable, acorn squash, can be seen on seasonal menus across the country. Whether simply roasted with butter and sage or tossed with ricotta as a ravioli filling, acorn squash is versatile and simple to prepare, but has a limited season from October to December. Two other popular winter squashes include: spaghetti squash, a small, watermelon-shaped variety with a golden-yellow, oval rind and a mild, nut-like flavor and butternut squash with a soft inner flesh that tastes somewhat similar to sweet potatoes.

Brussels Sprouts, a diminutive member of the cabbage family, is available from late September through mid-February. Brussels sprouts hold up to almost any preparation, from oven roasting to braising and blanching.

Eggplant is a transitional berry (that’s right — it’s not actually a vegetable or even a fruit), and like most berries, peaks toward the end of summer and begins to decline in the fall. Look for firm eggplants with a shiny skin.

Carrots have long been considered a “cool weather” vegetable and are generally best in the late fall and early spring. Once thought of as a humble side dish, carrots have come into their own in recent years and are now widely available in their various natural hues, including red, purple, yellow and white.

Sweet potatoes are actually available year round, but are best in November and December. Sweet potatoes work well in both sweet and savory preparations, from mashed sweet potato to sweet potato pie. Not to be confused with yams, most sweet potatoes in the United States are characteristically orange, but can still be found in white and yellow varieties throughout the deep South.

Cabbage is more than just the base for your backyard-barbecue coleslaw. It adds texture to a tossed salad, makes a great topping for your taco and, when sautéed with apples and bacon, is the perfect accompaniment to roast pork.

Broccoli like many cruciferous vegetables, can be grown year-round in temperate climates, so we’ve forgotten it even has a season. But, like the rest of its family, it tastes best when harvested in the cooler temperatures of fall in most climates. Broccoli rabe (rapine) is a more bitter, leafier vegetable than its cousin, broccoli, but likes similar cool growing conditions.

Winter Greens:  swiss chard has more substance than spinach and kale, like all hearty cooking greens, are less bitter in the cooler weather.

Mushrooms, while most mushrooms are available year-round, many are at their peak in fall and winter. The produce aisle routinely offers white button, portobello and, their younger sibling, cremini (also sold as “baby bellas”), oyster and shiitake mushrooms.

Try these vegetable based pasta dishes for a change of pace. 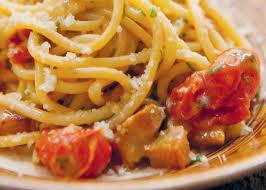 Place a large skillet on the stove top with the extra-virgin olive oil and the sliced garlic, spread out the garlic so it is in an even layer in the oil. Slowly brown the garlic stirring until golden all over, 4 to 5 minutes.

Place the tomatoes on a cookie sheet and pour garlic and olive oil from the skillet over the tomatoes. Season with some salt and pepper. Place in the oven and roast for 8 to 10 minutes or until the tomatoes start to burst.

Bring a large pot of water to boil, salt and cook bucatini according to package directions. Drain pasta.

In the same skillet that was used to brown the garlic, add the mushrooms and shallots. Let them cook for about 4 minutes, then add the thyme sprigs and season with some freshly ground black pepper, continue to cook for another 5 minutes stirring a few times. Add the white wine and cook until it has almost completely evaporated. Salt to taste and stir to combine.

Remove the stems of thyme and add the roasted tomatoes with their cooking juices from the baking sheet and the parsley and stir to combine. Add cooked pasta,mix well and garnish with cheese.

Pappardelle With Greens and Ricotta 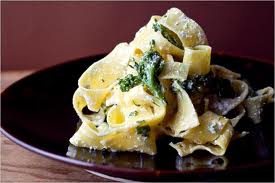 Bring a large pot of water to a boil. When the water comes to a boil, salt generously and add the greens (you may have to do this in two batches). After the water returns to a boil, boil two to four minutes until the greens are tender. Using a deep-fry skimmer or slotted spoon, transfer the wilted greens to a bowl. Do not drain the hot water in the pot, as you’ll use it to cook the pasta. Cut the greens while in the bowl into bite size pieces. ( I like to use kitchen scissors for this.)

Heat the oil over medium heat in a large, heavy nonstick skillet. Add the garlic, cook for about a minute just until fragrant, and stir in the greens. Toss in the hot pan for about a minute, just until the greens are lightly coated with oil and fragrant with garlic. Season with salt and pepper, and remove from the heat.

Place the ricotta in a large pasta bowl. Bring the greens cooking water in the large pot back to a boil, and add the pappardelle. Cook al dente. Ladle 1/2 cup of the cooking water from the pasta into the ricotta and stir together. Drain the pasta, and toss with the ricotta, greens and cheese. 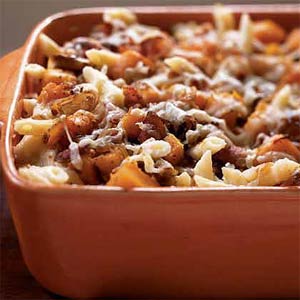 Cook the pancetta in a large nonstick skillet over medium heat until crisp. Add onions and sauté 8 minutes or until tender. Stir in roasted squash. Remove to a bowl and cover while pasta cooks.

Cook pasta according to the package directions. Drain well.