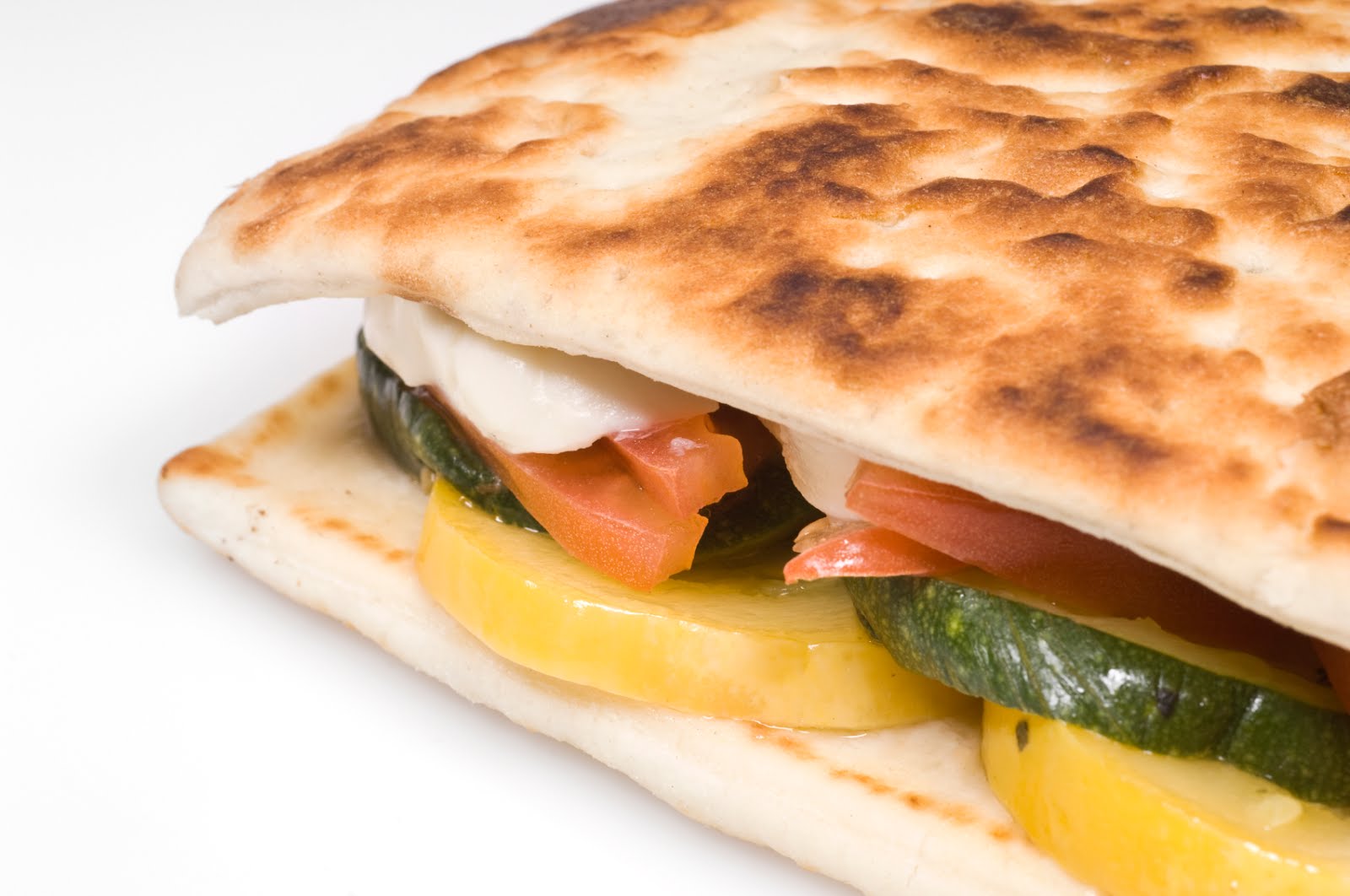 Achieving widespread US popularity, the ‘panino’ or Italian sandwich is known, more commonly, in English by its plural form ‘panini’. The difference between a panini and a regular sandwich is that it’s grilled, has ridges and the sandwich ingredients melt or fuse together, giving delicious flavor and texture to the filling. Panini sandwiches do not need additional butter or oil for grilling and a panini does not need to be turned over, the press does the work.

Panini are easy to make and can be made with any variety of food desired. Served with a salad or soup, a panini can make a complete, fast and healthy meal, eaten any time of the day. 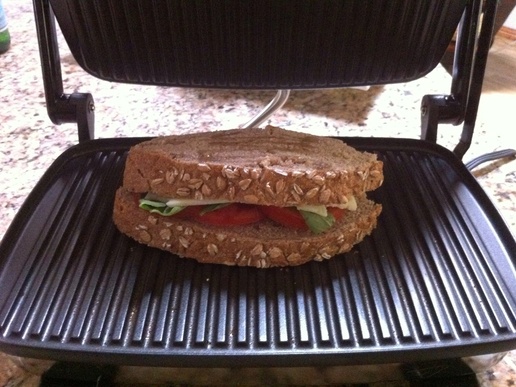 If you do not have a panini maker, a George Foreman Grill will make a great panini, but make sure the grill is heated prior to using.

On the stove: Preheat a skillet with butter or oil to medium low. Add your sandwich, then press a heavy pan on top to weigh it down. Cook until golden and crisp, 3 to 4 minutes per side.

Here is how to make your own panini:

There is no one traditional type of bread used for panini, but generally the most popular are ciabatta, focaccia and sourdough. The most important requirement is that your bread be sliced thick enough so that the sandwich can be grilled.

You can use whatever filling you’d like, but here are some suggestions:

Slice or use pre-sliced cheese.

Spread bread with condiments, if using.

Lay cheese on one bread slice.

Slice any other ingredients and place on top of the cheese.

Cover with another slice of bread spread with coniment of choice.

Place onto a preheated panini grill. Grill for 2 to 4 minutes.

Open the panini maker and check to see if the ridges are well-formed, the cheese is melted properly and the bread is toasted.

Remove the sandwich from the panini machine and cut in half.

Here are some panini for you to make. After that – use your ceativity. 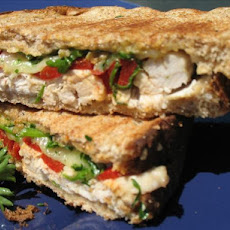 In a large saucepan, bring 8 cups water to a gentle simmer. Generously salt water. Add thyme, rosemary, bay leaves and black pepper. Add turkey and simmer until breast registers 160 degrees F on an instant-read thermometer. Remove from heat and let turkey cool in liquid. Store turkey in liquid, covered and refrigerated, until ready to use.

Preheat a panini press according to the manufacturer’s instructions.

Sandwich with remaining 4 slices of bread and place on the panini press. Close the lid and apply slight pressure; cook until bread is golden and cheese is melted, 5 to 8 minutes. If bread is sticking to the press, continue to cook and bread will unstick itself. If press is generating more heat from the bottom, flip the sandwich halfway through cooking.

Remove sandwich from press and cut in half before serving. 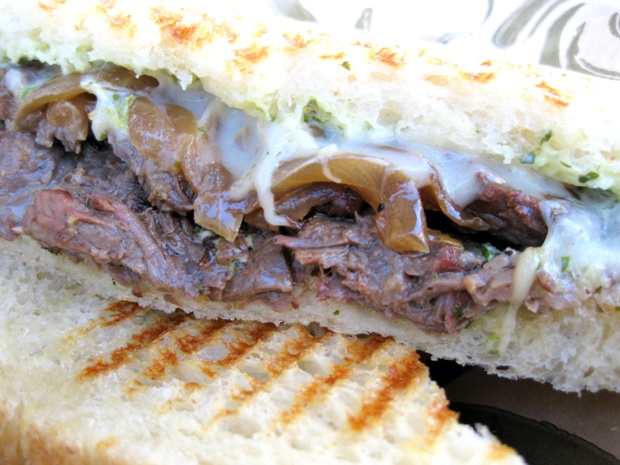 Sprinkle steak with salt and pepper on both sides. Place in a sealable plastic bag. Add garlic, lemon juice and olive oil. Seal bag. Shake until ingredients are evenly distributed. Place in the refrigerator for a 1/2 hour.

In a large nonstick pan over medium-high heat, heat 1 tablespoon of the marinade from the bag with the steak. Add steak to the pan and saute until medium rare, 5-7 minutes per side. Remove steak from pan and let rest on a cutting board for 10 minutes.

Add onions to the pan with any remaining marinade. Saute until onions are soft and translucent, 8-10 minutes.

Cut the steak into thin slices across the grain. Put 5 to 7 thin slices of steak on each roll. Top each sandwich with onions and cheddar cheese.

Place the sandwich in the panini press and cook until the cheese melts.

Everything or Anything Panini 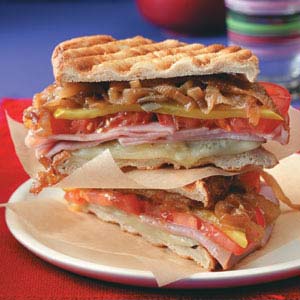 In a large skillet, saute onions in oil until softened. Reduce heat to medium-low; cook, stirring occasionally, for 30 minutes or until deep golden brown.

Cook on a panini maker for 3-4 minutes or until bread is browned and cheese is melted. Yield: 4 servings. 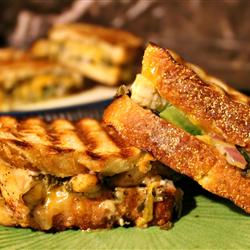 Grill paninis 5 minues in the preheated grill,or until focaccia bread is golden brown and cheese is melted. 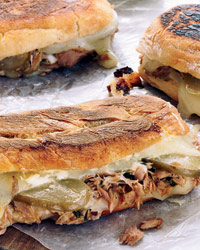 In a medium bowl, mix the tuna with the onion, olive oil, vinegar, basil and crushed red pepper. Season with salt and pepper to taste.

Spread the cut sides of the rolls with mustard and top each roll half with two slices of cheese. Spread the tuna mixture on top of the cheese and cover with the pickles. Close the sandwiches. 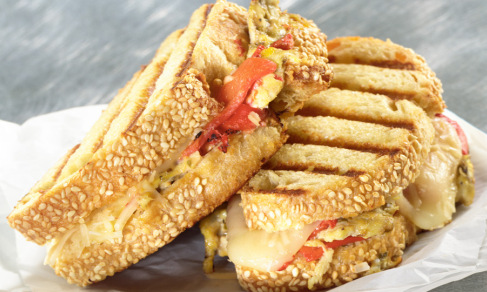 In the south of Italy, egg and bell pepper sandwiches are a classic. For variety, add some sautéed or grilled red onion slices.

In a small bowl, beat eggs, oregano, salt and pepper with a fork. Heat a nonstick skillet over medium-high heat and add a little olive oil. Add egg mixture. Cook, lifting the edges with a fork, 2 to 3 minutes or until set.

Place on panini grill and cover. Grill 5 minutes until golden and cheese starts to melt. 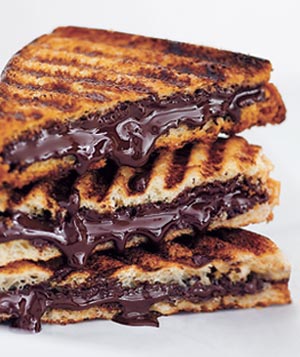 Form 2 sandwiches with the bread and Nutella

Transfer to a hot panini press and cook until the bread is golden and the chocolate has melted, 2 to 3 minutes.

(Alternatively, cook the sandwiches in a hot grill pan, turning once and pressing down frequently.) 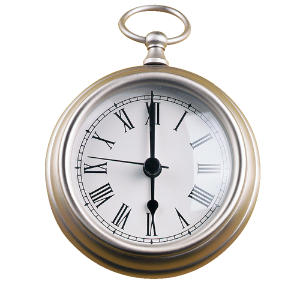 We live in busy times. The demands of work and family and personal activities can leave one with little room to pay attention to a healthy diet. When it comes to food, a person on the go doesn’t always make the best choices. When you’re hungry, a fast food meal that takes a couple of minutes to order at a drive through window can be so much more appealing than one that takes much more time to plan and prepare. Fast food, also known as “junk food” is fine occasionally, but when it becomes a habit, it can lead to weight gain and health problems down the road. This food is often low in fiber, high in fat, sugar and calories. The draw of fast food is it is both quick and tasty, but unfortunately, it isn’t that great for your overall well being. It may seem difficult to find quick healthy meals when you’re on the run,  but with a little thinking ahead, you can be well on your way to a healthier diet. If you are flustered just by the thought of cooking, you might start off by making healthier choices when you’re grabbing food to go. The Mayo Clinic outlines several tips for takeout food. They suggest keeping the calories down by watching the portion size, choosing the healthiest side dish available to you, going for fresh greens whenever possible, opting for grilled foods over fried items, asking for healthful substitutions such as low fat mayonnaise or dressing, and foregoing the sugary drink that often accompanies a fast food meal. Of course, the best option is to think ahead. Become a meal planner. Choose quick healthy recipes that you can take with you and eat on the run. When you plan ahead you have the advantage of knowing exactly what you are eating. You have more control over your choices, and you can choose anything: fresh fruits and vegetables, whole grains and lean meats, even an extra treat from time to time. Instead of feeling the frustration of having to pick from a menu of unhealthy items, you truly get to have it your way. Planning meals can be fun, and there are plenty of fast healthy recipes available; you can find great resources for these online or by shopping in the cookbook aisle of your local bookstore. You can try the recipes for 5 weeknights below to get you started. 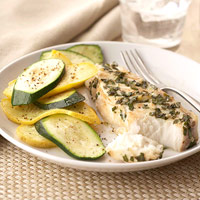 In a small bowl combine basil, melted butter, garlic, salt, and black pepper. Brush mixture over both sides of fish.

Place fish on the unheated rack of broiler pan. Broil 4 inches from heat for 8 to 12 minutes or until fish flakes easily when tested with fork, turning once.

An stove top grill can also be used to cook the fish. 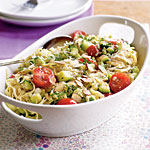 Pasta with Zucchini and Toasted Almonds

Serve with a green salad and bread sticks.

Sprinkle each serving with 4 teaspoons cheese and 2 teaspoons almonds. 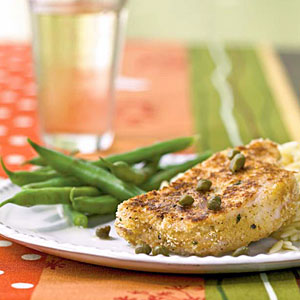 Heat oil in a large nonstick skillet over medium-high heat. Add pork to pan; cook 4 minutes on each side or until done. Remove from pan; keep warm. Add broth and remaining ingredients to pan, scraping pan to loosen browned bits. Cook 2 minutes or until reduced to 1/4 cup (about 2 minutes).  Serve with pork.

Heat olive oil over medium-low heat in large skillet. Brown chicken breasts on each side and remove to a plate.

Sauté garlic and red pepper flakes for about 1 minute. Add onion and peppers and continue cooking until tender and soft, about 10 minutes.

Add chicken breasts to skillet. Increase heat to medium and simmer, uncovered for 10 minutes. Turn chicken breasts and continue simmering for an additional 10 minutes or until sauce is reduced by about half and chicken is cooked through. (Meat thermometer should read 170 degrees when inserted into center of breasts..)

Serve with mashed potatoes and ladle sauce over chicken and potatoes.

Make a quick soup and while it simmers, make the sandwiches.

An alternative to a classic panini is a piadina. Piadine are flat, almost tortilla-like bread that is from the Emilia Romagna region in Italy.   They are almost always grilled. Most of the same ingredients in a normal panini can be put in a piadina; just the bread changes.   Turkey or ham or grilled vegetables can be used in place of any of the ingredients below.  You can cook these sandwiches on a Panini Press or a grill.

Heat the oven to 250°F. Heat the oil and garlic in a skillet over medium-high heat until the garlic starts to sizzle steadily and browns in places, about 2 minutes. Add the spinach, sprinkle with 1/4 teaspoon each salt and pepper, and cook, tossing, until just wilted, about 2 minutes.

Transfer the spinach to a colander. Let cool a couple of minutes, discard the garlic, and gently squeeze out the excess liquid from the spinach.

In a medium bowl, toss the spinach with the fontina, parmigiano, sun-dried tomatoes, and 1/4 teaspoon pepper. Set the 4 pita halves on a work space and top each with 2 slices of prosciutto on one side of the bread. Top each evenly with the spinach mixture and fold in half. You will have four piadinas.

Brush sandwich very lightly with olive oil and place in your panini maker.  Follow directions for your maker. You can also grill the sandwich on a stove top grill pressing down on the sandwich with a large spatula.  Grill until lightly toasted. Turn sandwich and press.  Grill until toasted.

Transfer to a baking sheet and keep warm in the oven. Cook the remaining sandwiches in the same manner.