The Cuisine of Italy – L’Aquila

Although L’Aquila is in a captivating setting, it has never been a priority for tourists. It is a traditional and very provincial Italian city between Rome and the Adriatic sea about an hour’s drive east of the capital.

A city rich in history, art and culture. It is built on the same plan and layout as Jerusalem. Both are on a hill, both are located at the same height above sea level and there are many other similarities. When walking around L’Aquila and looking into open doorways, one would discover beautiful hidden renaissance courtyards.

In the Middle Ages L’Aquila was on the road between two extremely powerful trading towns, Naples and Florence. It was famous for its rich fair where sheep, wool, milk, cheese, cattle, leather, cloth, almonds and saffron were traded. Later important noble families from Tuscany came to Abruzzo to take advantage of its produce and so it became the rich hinterland of Tuscany.

The main road connecting south and central Italy, called Via degli Abruzzi, was the safest road between Tuscany and the kingdoms of Naples and Sicily. The only other route was through the Vatican States, where dangerous outlaws populated the roads.

From at least 300 BC the open space on the hill, where the basilica of St. Maria di Collemaggio would be built, was the meeting point for the annual transumanza, the long trek of tens of thousands of sheep and hundreds of shepherds from the hot plains in the south to the high plain of Abruzzo and back. In those days sheep, with their by-products of cheese, milk and wool, were of utmost importance for survival. 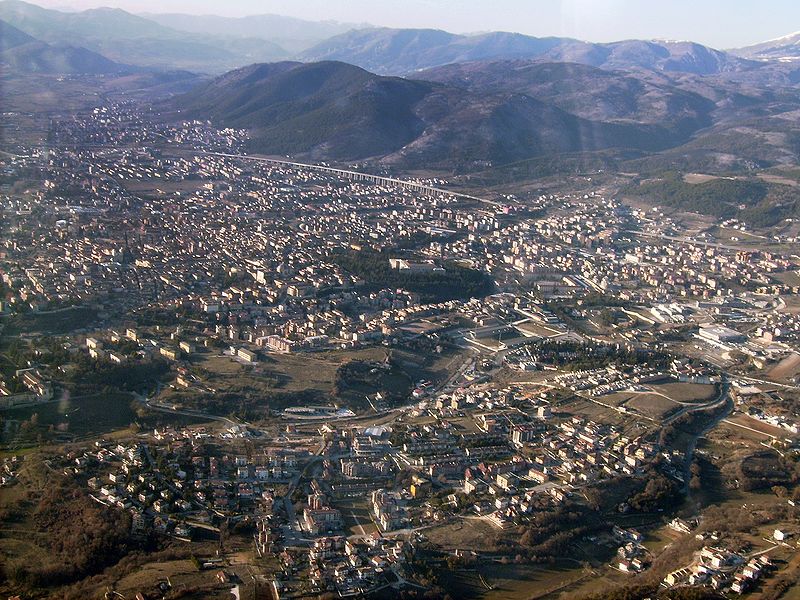 The small city was formed in 1254, its citizens drawn from the area’s 99 villages. Each village was required to build their own piazza, church and fountain in the new city. Unfortunately most of these structures were destroyed in a catastrophic earthquake in 1701, but remnants of this unusual history remain.

As one of Italy’s highest towns, L’Aquila isn’t the easiest of places to get to, but those who make the effort will be rewarded with some impressive architecture within the city walls and wild nature just outside. 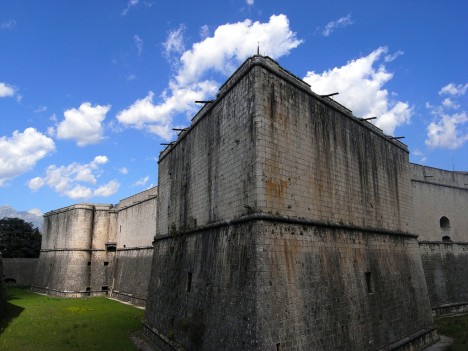 The sturdy, 16th century castle (known locally as the Forte Spagnolo) is a good place to begin your explorations. Here you can admire the tremendous views across the town with the Appennines making a dramatic backdrop. You can also delve below ground and wander the underground passages that lace the castle’s foundations. The castle itself houses the Museo Nazionale d’Abruzzo, a bizarre mix of ecclesiastical art and the skeleton of an enormous mammoth. Estimated to be a million years old, it was unearthed just outside the city in 1954. Also, not to be missed is the Casa Museo Signorini Corsi, a beautiful palazzo housing the aristocratic Corsi family’s religious art and period furniture. 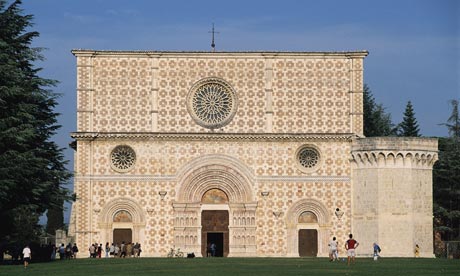 Basilica di Santa Maria di Collemaggio: You can’t miss its distinctive pink and white façade and rose windows. The sparse, gothic interior makes for a surprising contrast. This church was built by a hermit, Peter of Morrone, in the 13th century. Through a strange twist of fate, this quiet man was thrust into the limelight, when suddenly elected Pope in 1294. So attached was he to his church in L’Aquila, he risked ruffling feathers by insisting on being crowned here rather than in Rome. Reluctant from the start, he passed a decree allowing Popes to abdicate, and then did so, just 5 months after taking office. His successor imprisoned him and he died soon after. His body was taken back to L’Aquila and is buried in the Basilica.

Other impressive structures in L’Aquila include Fontana delle 99 Cannelle, or the fountain with 99 spouts and corresponding masks as well as the many museums and homes for famous art. 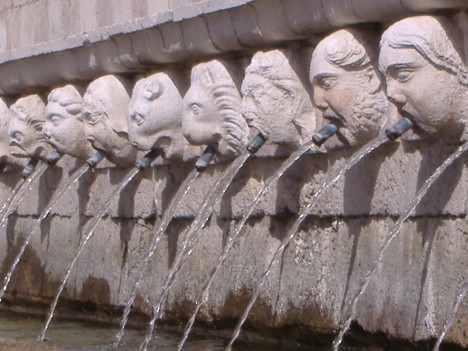 Those wanting to explore the region’s great wildernesses will find L’Aquila a perfect base. A short drive from the town are three spectacular national parks: the Majella National Park; the Gran Sasso National Park and the Abruzzo National Park.

• Skiing is the most common sport, both cross-country and downhill skiing. Campo di Giove, Campo Felice, Campo Imperatore, Ovindoli and Scanno are the most famous ski runs.

• Trekking, jogging, horse riding, bicycling and mountain biking along the valleys and slopes of the countryside are other favored outdoor activities. Experts scour the woods searching for epigeal mushrooms and truffles, that they cook on the spot.

• Open-air celebrations and popular festivals are often organized in the province of L’Quila, typical and folkloristic occasions representing a revival of the old traditions and offering the possibility to taste traditional local products.

In the early morning of April 6, 2009 a 20 second lasting earthquake with magnitude 6.9 (followed later by weaker aftershocks) occurred near the city of L´Aquila, Italy.

Italy has a long and tragic history of earthquakes. The position between two large continental plates (the European and African) and various micro-plates of the Mediterranean Sea results in highly active seismicity all over the peninsula. While most of the medieval structures in rural areas collapsed or were heavily damaged, in L’Aquila most concern arose from the observation that modern buildings suffered the greatest damage and that the death toll included mostly young people. 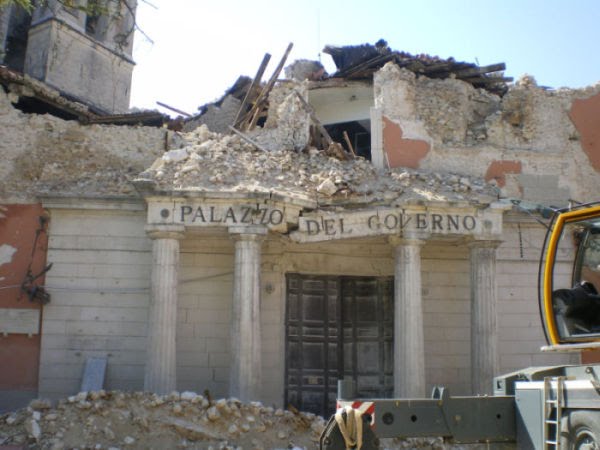 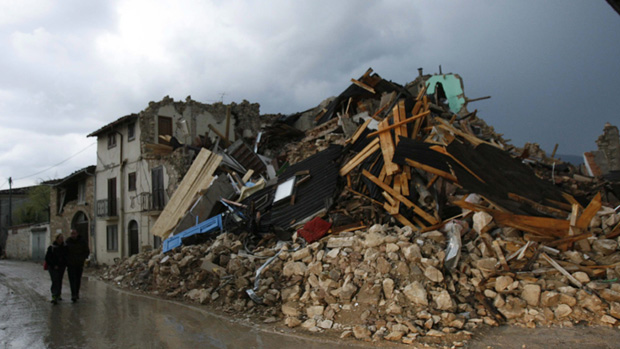 The Food of L’Aquila

The unusual local cuisine is one of the highlights of this remote mountainous region. The local diavolicchio chili peppers crop up in many specialties, including agnello diavolo – lamb chops cooked with the chilies and tempered with orange peel, rosemary, and fennel. Maccheroni alla chitarra is more well known – homemade squares of egg pasta with a spicy, meaty tomato sauce.

When it comes to meat, lamb is often prepared using a recipe called Cacio e uova, meaning with pecorino cheese and egg, and the lamb intestines are used to stuff meat roll-ups. Pork is used to prepare ’ndocca ’ndocca, a stew of boiled meat that includes all the parts of the pig, from the snout to the tail.

The fish and seafood recipes tend to rely less on tomato sauce and more on pepperoncino, especially in fish stews.

The area’s unique, regional products include: Cicerchia, or grass-pea, is a regional specialty, as are truffles and saffron from L’Aquila, red garlic from Sulmona and the diavolillo peperoncino that is used to flavor just about every dish. They are also a big producer of extra virgin olive oil. The region has three classified DOP varieties.

Sheep’s milk cheeses dominate dairy production. Caciocavallo and Scamorza are two local favorites that can be found young and aged. Ventricina is a pork sausage that is stuffed into a casing made from pork stomach, rather than intestine. Look for ventricina from Teramo, it is thought to have the best soppressata and mortadelle which is served with a glass of local Montepulciano d’Abruzzo or Trebbiano wine. 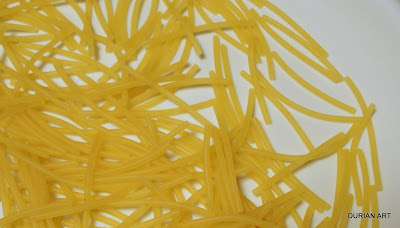 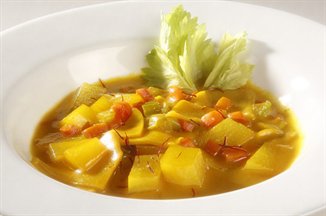 Boil and peel the potatoes and cut them into large chunks and set aside.

Lightly sauté the onion, carrot and celery in olive oil in a deep pot. Add 8 ½ cups water and 1 teaspoon salt. Bring to a boil and add the pasta.

When the pasta is cooked, stir in the potatoes and saffron 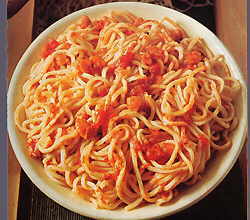 A famous fresh-egg-pasta dish from the L’Aquila, in the Abruzzi region of Italy. The ‘guitar’ is a wooden frame strung with innumerable wires close together – for cutting the pasta in thin strips by laying the pasta on the ‘strings’ and passing a roller over it. 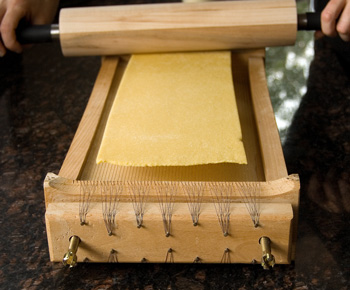 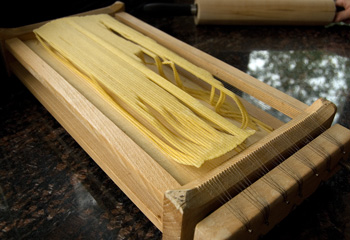 For a rough approximation of the original – use any fresh pasta from the refrigerator section of your local store. Remember that fresh pasta cooks very quickly: 3 – 4 minutes on average.

Dice the pancetta and sauté in the butter until golden.

Add the cut tomato pieces and chili pepper and cook for a few more minutes, until soft.

Add the salt and black pepper to taste.

Cook the pasta.according to directions 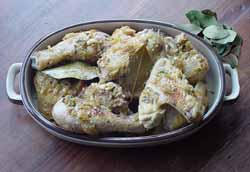 Notice tomatoes are not used.

Salt and pepper the chicken pieces to taste.

In a skillet with a cover large enough to accommodate the entire chicken, heat the olive oil over medium heat. Add as many chicken pieces as will fit in the bottom of the pan without crowding, and brown. As the pieces brown set them aside and continue with the remaining chicken until all pieces are browned.

When all chicken is browned and removed from pan, add the onion, parsley, celery, chili and crushed clove of garlic and saute, stirring, until transparent.

Add the bay leaves, return all the chicken pieces to the pan,

Pour the 1/2 cup of white wine over the chicken and mix the ingredients well; continue on medium heat allowing the wine to evaporate. –

When the liquid in the pan has thickened, add 1/4 cup of water, reduce the heat to low, cover, and 30 – 60 minutes, until the chicken is tender and done (a fork should easily pierce the meat).