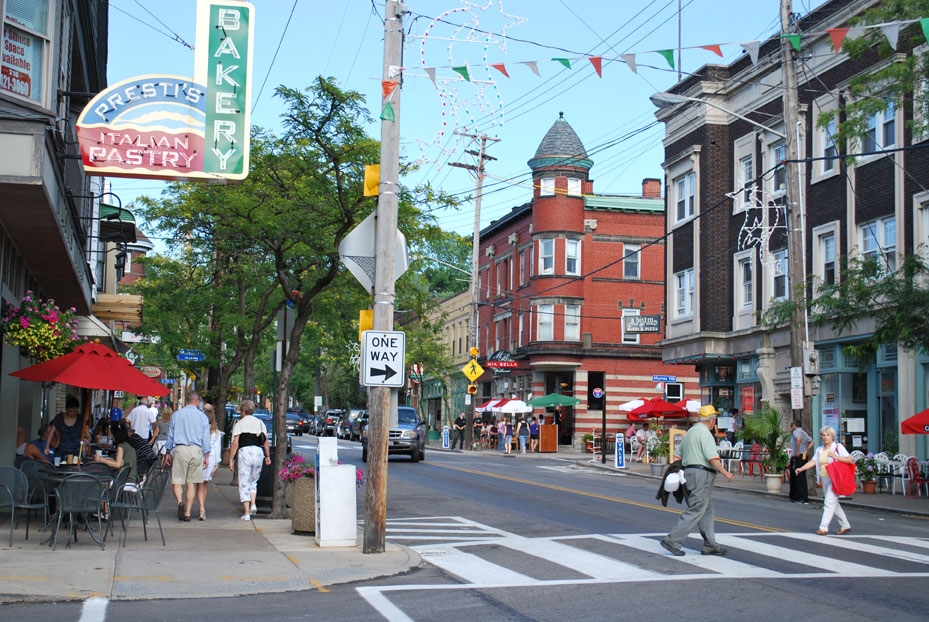 By the mid-1800s, a small group of Italian immigrants had arrived in Cleveland and were working in various occupations, as bookkeeper, boot maker, gardener, carpenter, steel worker and stone mason. Twenty years later, Italians were owners of restaurants, saloons, produce stands and grocery stores. In the late nineteenth century, Italian immigrants traveled to Cleveland and many opened businesses to service the growing Italian population. They made their homes in several areas around Cleveland: Big Italy, Collinwood, Murray Hill and Kinsman. In 1912, the Italian communities had more than 50 local societies to help them assimilate. No institution better reflects the uniqueness of Cleveland’s Italian community than the hometown society that enabled the immigrants to transplant the solidarity of their native villages to America. Meeting weekly, they reminisced in their village dialect, maintained family acquaintances, continued ties with their Italian village, buried their dead, cared for widows and children and found employment and housing. The area relied on the local parishes, such as Holy Rosary; charitable institutions, such as Alta House and the cohesiveness of the neighborhoods to sustain them. 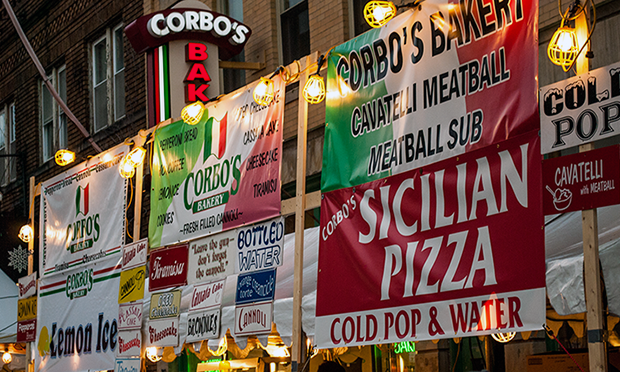 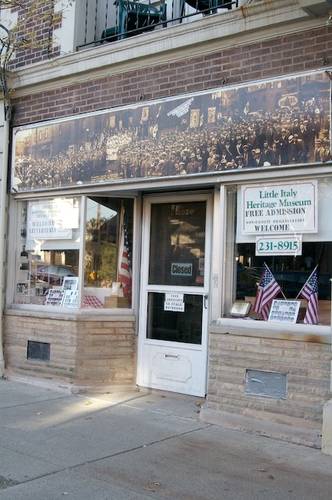 The Little Italy Heritage Museum closed at the end of 2007. The museum’s collection of photographs and artifacts were donated to the Western Reserve Historical Society in University Circle.

Many of these Italians were Neapolitan and were engaged in skilled lacework, garment making and the embroidery trades. The largest group came from the towns of Ripamolisano, Madrice and San Giovanni in Galdo and Campobasso Province in the Abruzzi region.

By the late 1920s, six Italian neighborhoods had been established. The largest was “Big Italy”, located along Woodland and Orange Avenues from East 9th St. to East 40th St. “Little Italy”, centered at Mayfield and Murray Hill roads, proved to be the most enduring. Nearby, at East. 107th St. and Cedar Ave., a community grew around St. Marian’s Church. Also on the city’s east side was a substantial Italian settlement in Collinwood. Two settlements were on the west side, one near Clark and Fulton Avenues and one on Detroit near West 65th St.

In each community, the Italians transplanted their institutions, including nationality parishes, hometown societies, mutual-aid organizations and a multiplicity of family-owned businesses. What the Italians brought to Cleveland were the traditions, values, patron saints and dialects from the villages they represented. Their affinities and affiliations were largely with their paesani (fellow villagers). 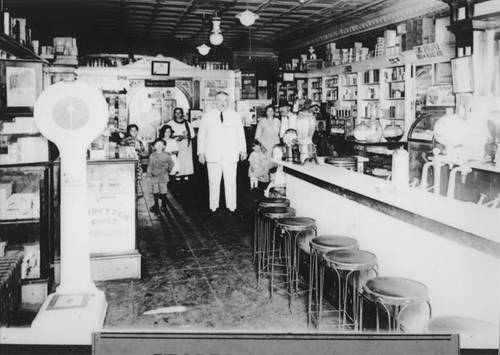 The Italian Drug Store on Mayfield Road was just one of many thriving businesses in Little Italy in the mid-20th century.

Eventually, Murray Hill became Cleveland’s only “Little Italy” and today remains strongly Italian. Red, white and green is proudly displayed in all forms and numerous restaurants, cafes, bakeries, specialty shops and galleries offer a wide variety of Italian food and merchandise. Little Italy sits above University Circle, bounded by Euclid Avenue to the south, Cedar Road to the east, Mayfield Road to the north and the Lake View Cemetery to the west. The area became a thriving neighborhood in the late 19th century when dozens of skilled stone cutters and craftsmen arrived from Italy to design and create the magnificent monuments at Lake View that mark the graves of some of that era’s most influential citizens. Joseph Carabelli’s Lake View Granite and Monumental Works was the leading employer of these skilled artisans.

Cleveland’s Italians were also active in manufacturing. The Ohio Macaroni Co., established in 1910 by Joseph Russo & Sons, became Ohio’s largest macaroni company by 1920. Roma Cigar Co., started in 1913 by Albert Pucciani, produced 20,000 cigars weekly by 1920. Grasselli Chemical Co. was also prominent.  Although only 4 of the city’s restaurants were owned by Italians in 1920, one of these, New Roma, was reputedly the largest and most attractive in Ohio. Italian chefs prepared meals at the Cleveland hotels and at the Shaker Heights Country Club. 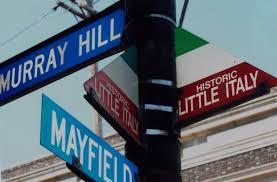 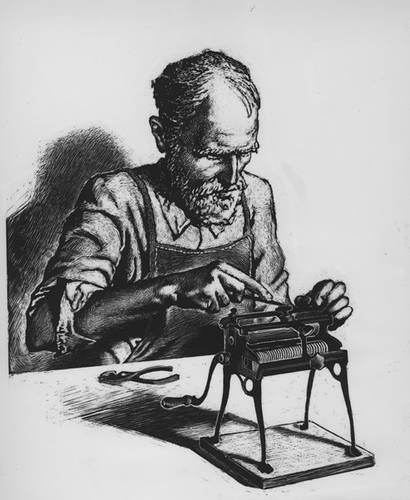 Twenty Italian medical doctors and dentists served the community by 1920; one of the most prominent was Giovanni A. Barricelli. Italian-born attorneys did not follow immigrants to Cleveland, so the community had to wait for the children of immigrants to fill this void. Politically, as long as the Italian community, family and “old ways” were not threatened, Italians were not seriously active, with only 1,423 “naturalized Italians” voting out of a foreign-born population of 13,570 in 1915. Not until the late 1920’s, did Cleveland’s Italians take a more active interest in politics. The area also produced a number of interesting favorite sons, including Angelo Vitantonio, the inventor of the pasta machine, championship boxer Tony Brush and Anthony Celebrezze, Cleveland mayor, federal judge, and secretary of health, education and welfare under President John F. Kennedy and President Lyndon B. Johnson.

The Italian-American press was one of the most effective means of ethnic expression. In 1903 the first Italian newspaper in Ohio, La Voce Del Popolo Italiano, was founded and by 1920, it claimed a circulation of 15,000 in Cleveland and another 30,000 throughout Ohio and other states. La Stampa also emerged during this period. These papers interpreted American law, made clear economic and social rights, emphasized the advantages of citizenship and became an incentive for literacy, offering news from the homeland. By 1915 La Voce became the first Italian newspaper in the U.S. to publish articles in both Italian and English. Later, other newspapers, such as L’Araldo, appeared but enjoyed limited success. As the Italian language reading skills of the second generation were lost, radio broadcasts with the “Italian Hour” became more popular. By the 1990’s a renewed interest in Italian heritage made possible the successful publication of a new Italian newspaper, La Gazzetta Italiana. Written largely in English, the paper garnered a large readership among 2nd, 3rd and 4th generation Italian-Americans. 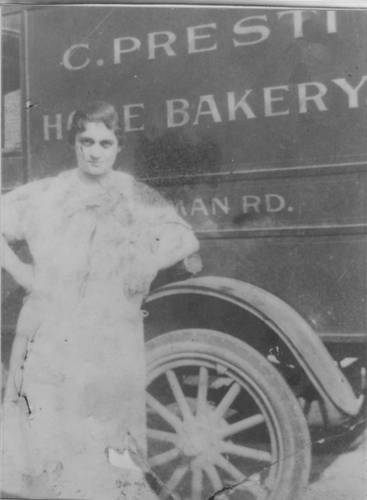 In 1994, the Little Italy Redevelopment Corporation was formed to manage improvements and direct growth. Festivals and events are held year-round, including opera in the Italian Cultural Garden, an Italian film festival, Art Walk, Italian classes, neighborhood walking tours and a Columbus Day Parade. In August, the Feast of the Assumption, the only fundraiser for the Holy Rosary Catholic Church, brings thousands to Little Italy for food, Italian merchandise, live music and a procession. Today, the neighborhood still retains its Italian flavor. There are small family-run bakeries, Italian restaurants – featuring everything from stylish Northern Italian cuisine to provincial pizza and pasta. Rosa and Charles Presti started their bakery business in Little Italy in 1920. Originally located on Coltman Road, the bakery moved to Mayfield Road in 1938. Presti’s continues to be a popular neighborhood meeting place. 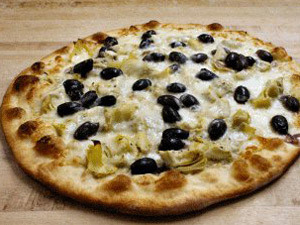 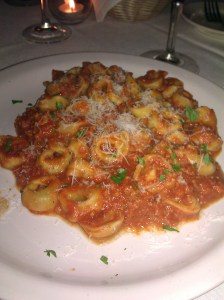 Little Italy has a long history of varied Italian restaurants. Chef Hector Boiardi (known to the world as Chef Boyardee) started his culinary career here and Guarino’s was Ohio’s first Italian restaurant. Today, the neighborhood is still the place to go in Cleveland for Italian food. Some of the most popular eateries are: 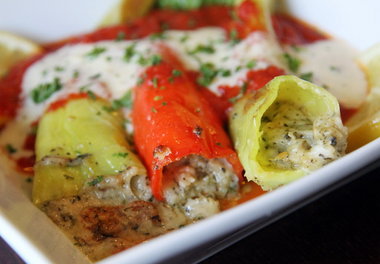 Peppers stuffed with cheese at Trattoria on the Hill in Cleveland’s Little Italy.

Mayfield Road and Murray Hill Road are lined with small art galleries, featuring everything from pottery to photography to glass art to oil paintings. The most interesting of these galleries is Murray Hill School, a former elementary school, now home to dozens of artists’ studios and galleries. 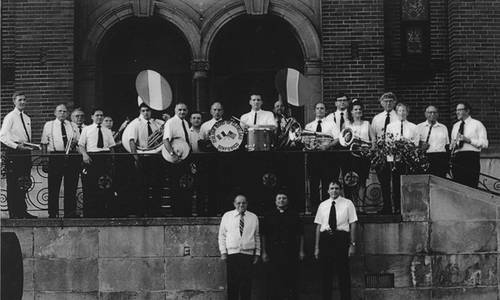 Make Some Recipes From Cleveland’s Little Italy At Home 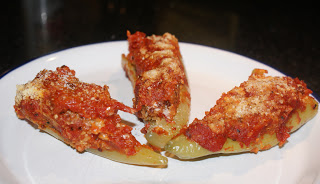 Mix sausage, Romano cheese, bread crumbs, salt and pepper and Italian seasoning together in mixing bowl. Cut the top of the banana pepper off and remove seeds. Gently stuff mixture into peppers. Place olive oil in hot saute pan. Gently place peppers in the pan and cook each side until browned.

Place them in a glass baking dish, pour marinara sauce over them, sprinkle with mozzarella on top and cover with foil. Put in a 375 F. degree oven for 20 minutes. 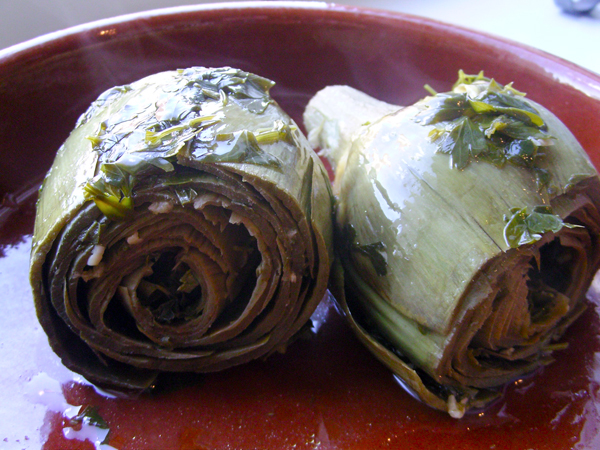 Combine artichokes, oil and thyme in small stock pot. Cook over low heat for 20-30 minutes or until tender. Strain and cool. Save the oil; it can be used for cooking or salads.

Top or stuff cooled artichokes with goat cheese mixture, bread crumbs and a drizzle of the cooled oil.

Bake at 350 degrees F. until hot and golden brown on top. Serve with red pepper coulis, if desired.

Sweat garlic and shallots in oil. Add chopped pepper and continue to sweat for 5 minutes.

Puree in blender or food processor with lemon zest and salt. 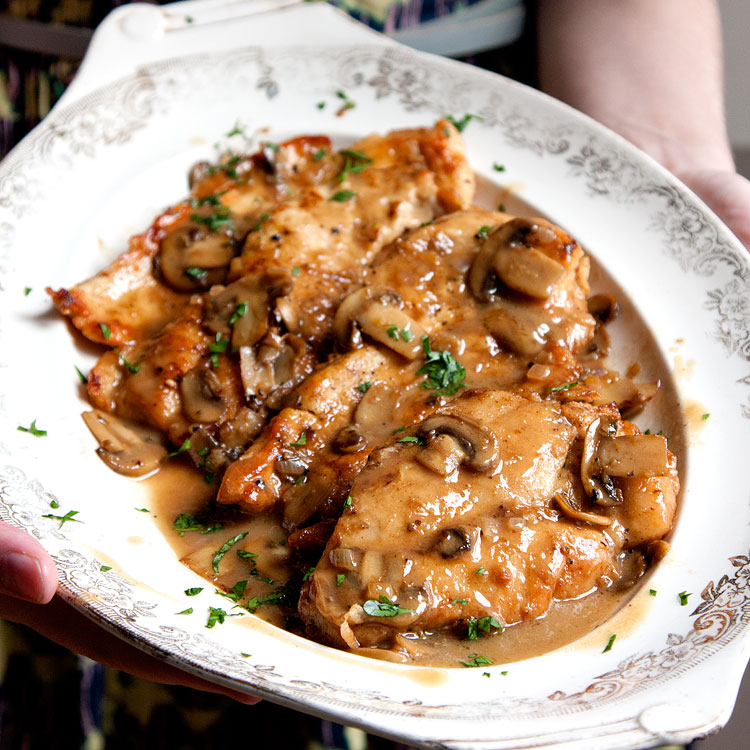 Put the chicken breasts between 2 pieces of waxed paper and flatten with a meat pounder until thin. Cut each chicken breast into 4 pieces. Add some flour to a shallow bowl. Dredge the chicken in the flour and shake off the excess flour.

Add the butter and olive oil to a large saute pan over high heat and heat until it sizzles, do NOT let it brown. Add the chicken and saute until brown on both sides. Stir in the sliced mushrooms and saute briefly, then add the garlic. Add the Marsala and simmer for 3 minutes, then stir in the remaining 2 tablespoons of flour. Pour in the beef stock and let simmer until the sauce thickens, about 3 to 5 minutes. Transfer to a serving platter and serve. 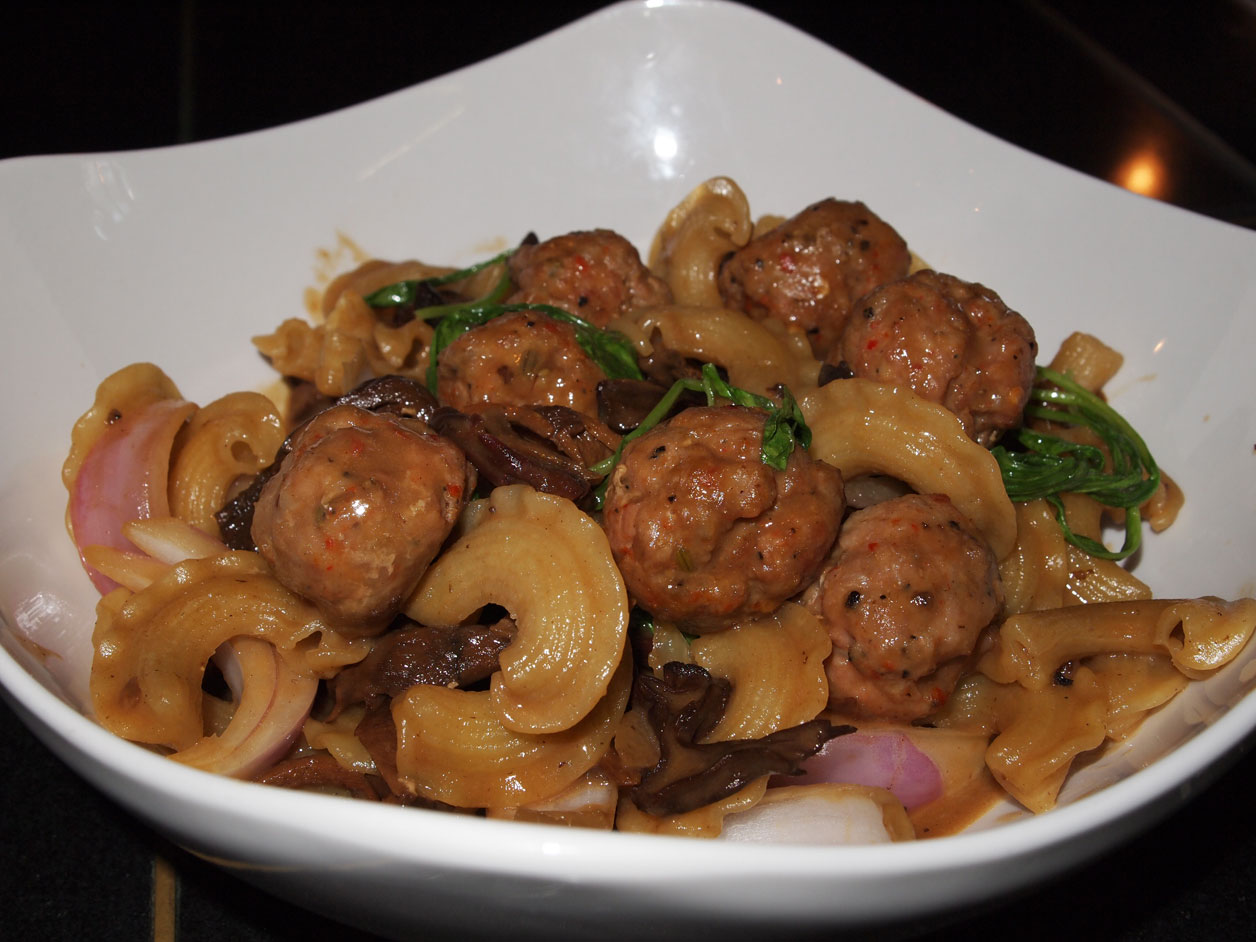 Pasta with Porcini, Sausage and Marsala

Place porcini mushrooms, marsala and beef stock in a pot, bring to a boil, turn off heat and let steep for ten minutes. Strain and rough chop the porcinis. Save the strained soaking liquid.

Melt the butter in a saucepan and add the flour to make a roux. Cook two minutes on medium heat and then add the marsala/stock mixture. Bring to a simmer while whisking. When thickened, add chopped porcini mushrooms.

Remove sausage from casing and roll into 24 small meatballs, bake at 350 F. degrees for ten minutes. Place meatballs, sauce, red onion and arugula in a sauté pan and bring to a simmer. Cook pasta in boiling salted water until al dente (about three minutes) strain the pasta and add to the saute pan with the other ingredients; add the Romano cheese, toss and serve. 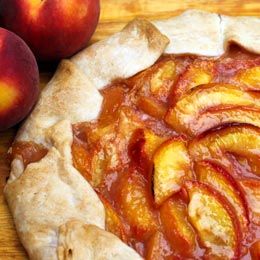 For the tart dough:

Combine the flour, sugar, salt and hazelnuts in a food processor and pulse to combine.

Slice the fruit by first splitting in half, removing the pits, sliceinto 1/2 inch slices, place in a bowl and set aside.

Toss the fruit with the Calvados first, then add the sugar and lemon zest. Stir to combine. Let rest 20 minutes and strain off juices.

Remove the dough for the refrigerator and place on a well floured surface.

Roll one piece of dough out away from you, giving it a quarter turn between rolls. Turning the dough will keep it circular. Continue rolling and truning the dough out until it reaches a thickness of about 1/8 inch. and about 11 or 12 inches round.

Fold the excess dough towards the center of the crostata in a circular motion forming a crust. Beat the egg and with a pastry brush lightly coat the crust of the crostata and sprinkle sugar over top.

Repeat with the second piece of dough and remainder of the filling.

Bake the crostata in a 350 F. degree oven for 25-30 minutes or until golden brown. Remove from the oven and let rest for 10-15 minutes, before slicing. 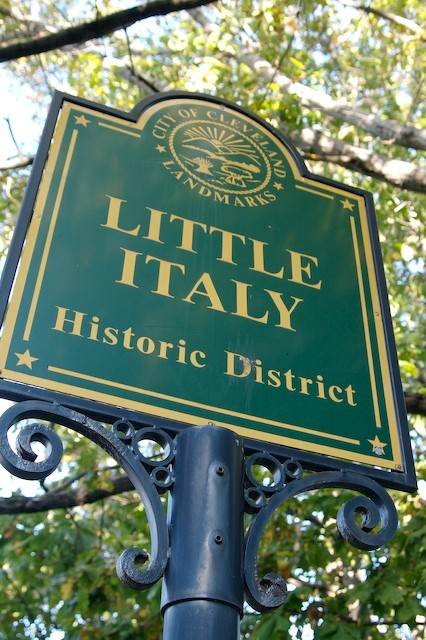