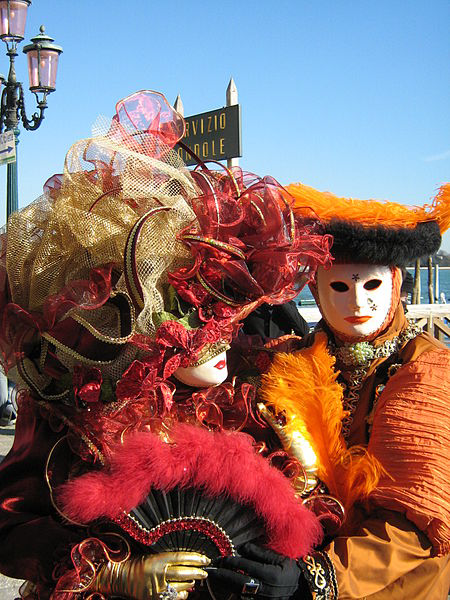 Carnevale, also known as Mardi Gras, is celebrated in Italy and many places around the world 40 days before Easter, a final party before Ash Wednesday and the restrictions of Lent.

The Carnival of Venice was for a long time the most famous celebration. From Italy, carnival traditions spread to the Catholic nations of Spain, Portugal and France. From France, they spread to the Rhineland of Germany and to New France in North America. From Spain and Portugal, they spread with Catholic colonization to the Caribbean and Latin America.

The most widely known, most elaborate and most popular events are in New Orleans, Louisiana. Carnival celebrations, usually referred to as Mardi Gras, were first celebrated in the Gulf Coast area of the United States, but now occur in many other states. Customs originated in the onetime French colonial capitals of Mobile (now in Alabama), New Orleans (Louisiana) and Biloxi (Mississippi), all of which have been celebrated for many years with street parades and masked balls. Other major U.S. cities with celebrations include Miami, Florida; Tampa, Florida; St. Louis, Missouri; Pensacola, Florida; San Diego, California; Galveston, Texas and Orlando, Florida.

For information on how Mardi Gras is celebrated in New Orleans read my post: Mardi Gras Time !

Carnevale in Italy is a huge winter festival celebrated with parades, masquerade balls, entertainment, music and parties. Children throw confetti at each other. Mischief and pranks are also common during Carnevale, hence the saying, “A Carnevale Ogni Scherzo Vale”, or anything goes at carnival.

Carnevale has roots in pagan festivals and traditions and, as is often the case with traditional festivals, was adapted to fit into Catholic rituals. Although Mardi Gras, sometimes called “Fat Tuesday” or “Shove Tuesday”,  is actually one date – the Tuesday before Ash Wednesday – but in Venice and New Orleans and in some other places, the carnival celebrations and parties may begin a couple of weeks before.

Carnevale Di Venezia was first recorded in 1268 with mention of masks, parties and rich food. In the height of the masquerade, mascherari (maskmakers) enjoyed a special position in society, with their own laws and guild. Masks made the Venetian carnival unique, as it took away social status and inhibition. In this way, the social order was temporarily non-existent. However, when Venice fell under Austrian rule after Napoleon’s Treaty of Campo Formio in 1798, the city and all its culture went into decline. This pre-Lent celebration didn’t enjoy a revival until almost 200 years later when, in the 1970’s, a group of Venetians decided to revive the tradition.

Masks or maschere are an important part of the carnevale festival and Venice is the best city for traditional carnival masks. Carnival masks are sold year round and can be found in many Venetian shops, ranging from cheap to elaborate and expensive. Walking through the streets of Venice, one can view a variety of masks on display in shop windows. People also wear elaborate costumes for the festival and there are numerous costume or masquerade balls, both private and public.

What foods are popular in Italy during Carnevale?

Almost every Italian town and region has some specialty in recognition of Carnevale, though in Venice, the specialty is frittelle. These fritters are fried golden brown and filled or topped with a variety of treats, bursting with sweet or savory flavors, like chocolate, jelly, fruit or meat. The enticing smells drift through the city and can be found in the cichéti stalls along the streets, where it is easy to pick up these “small bites”.  In the other regions, similar fare can be found under different names, like the Lombard chiacchere, Tuscan cenci and Roman frappe. But under any name, they are all the highlight of the season for Italians and visitors alike. Other Venetian carnevale foods include “Pasticcio di Maccheroni” (a baked pasta, ricotta, meat pie), “Pizza Sfogliata con Salsiccia e Pancetta” (filled, rolled baked dough), “Migliaccio di Polenta” (polenta and sausage) and steaming plates of lasagnas and pastas, filled with pancetta, prosciutto, salami and sopressata.

Naples has the sumptuous Lasagne di Carnevale. In the past poorer families could only afford to make this dish once a year, therefore, it became very special and every family had their own secret recipe. There was a great deal of competiton in the local towns over whose lasagna was best. Throughout much of Italy, however, Carnevale is an occasion for eating pastries, fritters of one kind or another that are quick to make and fun to eat. During the weeks of Carnevale, it is a tradition to eat a lot of sweets because they will not be able to eat them during Lent.

Some versions of this recipe add sliced hard-boiled eggs to the layers along with the meat.

Cook the lasagna noodles in abundant, slightly salted water until they’re al dente, run them under cold water and lay the sheets out on a kitchen cloth, covering them with a second cloth.

Sauté the onion in the oil until soft. Add the Italian sausage and after it has browned add the tomatoes. Simmer over moderate heat for about an hour, adding the beef broth a little at a time. Season with salt and pepper, to taste.

Combine the ground beef with the bread crumbs, egg, parsley, ricotta and half the grated Parmigiano cheese. Make 1-inch diameter meatballs from the mixture and dredge them in the flour. Heat a little oil in a skillet and brown the meatballs on all sides, about 10 minutes, then remove them with a slotted spoon, place them on paper towels and keep them warm.

Dice the prosciutto and mozzarella. Oil a baking pan about the length of the pasta noodles. Place a layer of pasta in the bottom of the pan, then a few meatballs, some of the sauce, some of the diced ingredients and a sprinkling of Parmigiano. Continue until all the ingredients are used; then bake the lasagna for 15-20 minutes until bubbling. Let the lasagna rest for ten minutes before serving.

Rolled up pizza with sausages and pancetta is a specialty for Carnevale.

Make a mound of the flour on your work surface, form a well in the middle of it, crack the eggs into the well, add a pinch of salt and mix together with your hands; knead the dough until it is smooth and elastic, then cover it and let it rest for 20 minutes.

Heat 1 tablespoon of the oil in a large skillet. Remove the sausages from their casings and crumble them into the skillet, together with the pancetta. Brown the meat for 4-5 minutes.

Roll the dough out about 1/8 of an inch thick (3 mm). Spread the remaining oil over the dough, then distribute the sausage and pancetta evenly over the dough as well.

Sprinkle the meat with black pepper to taste, dust very lightly with cinnamon and roll the dough up to make a snake.

Coil the snake, pressing gently in the center section of the snake to give the pizza a uniform width, put the snake on a cookie sheet lined with parchment paper and bake it for 30-40 minutes, or until the pizza is evenly browned.

Simmer the rice in the milk until it’s quite soft and begins to give off its starch, then stir in the sugar, lemon zest and butter. Let the mixture cool.

Separate the eggs and whip the whites to soft peaks. Combine the yolks and the rum or wine and stir into the rice mixture, then fold in the egg whites, flour and baking powder.

Heat about 3 inches of oil to 375° F in a 4 to 5-quart heavy pot over medium-high heat. Drop the batter, a teaspoon at a time, into hot oil and fry the frittelle until they are golden brown.

Drain them on absorbent paper and, when they have cooled, dust them with confectioner’s sugar.

soft and very smooth. Rest the dough for 20 minutes. Then form long and thick noodles of dough an inch thick, rolling the dough with your fingers.

Cut into pieces the size of a chestnut. Roll into balls.

Heat 2-3 inches of oil in a deep-frying pan and drop about six balls in at a time, frying over low heat and turning them as they brown. Use a spider or large slotted spoon to turn them until they are puffed up, golden and begin to float. Scoop them out and place them on layers of paper towels. Repeat with remaining balls and then sift powdered sugar over them.

Depending on where you are in Italy, you might ﬁnd these chiacchiere under the name of crostoli (or grostoli), sfrappole, galani, frappe or cenci with different regions substituting the white wine with marsala, acquavite or anisette.

Place ﬂour in a mixing bowl and stir in the sugar. Slowly work in the butter and the eggs followed by the white wine. Knead until the dough becomes soft and pliable. If it feels too sticky to the touch add a little more ﬂour. Dust a work surface with a little ﬂour. Roll dough out thin and cut it into triangles about 4 inches (10cm) long.

Heat about 3 inches of oil to 375°F in a 4 to 5-quart heavy pot over medium-high heat and when hot, fry the chiacchiere in small batches. When they are golden brown all over, remove them from the oil and drain well on paper towels. Before serving, dredge with powdered sugar.