How To Make Stuffed Pastas At Home 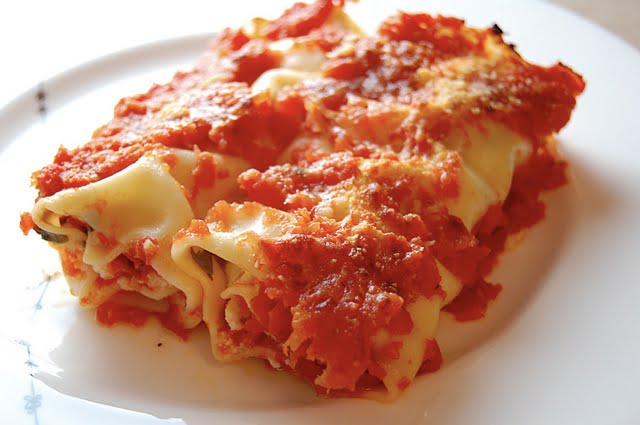 Oven-baked pasta has a long history that goes back to the late Middle Ages and the Renaissance, when pasticci, timballi, and other forms of baked pasta were often served at the large banquets in the palaces of nobles. Pasta al forno was an opportunity for the chef to show off his creativity and inventiveness. Eventually, the dish was adopted all over Italy—its success no doubt due to its infinite versatility. Today, it’s still a staple dish of southern Italy, where it is usually prepared on Sundays, religious holidays, and special occasions.

In Italy, the great variety in preparations of pasta al forno depends not only on what you have in your refrigerator or pantry, but also on regional traditions and approaches. For instance, in northern Italy, butter, pork fat, or even bone marrow are used for sautéing ingredients or in preparing the ragù (meat sauce); while in the southern regions, olive oil is predominantly used. Southern-style baked pastas are often based on vegetables—such as roasted or grilled eggplant; peppers or zucchini; sautéed or steamed peas; spinach or chard; broccoli or broccoli rabe; or cauliflower. Often local cured meats—such as sopressata, prosciutto, or sausages—are added. Sometimes tiny meatballs or even sliced hard-boiled eggs are used. Cheeses—such as caciocavallo, scamorza, provola, and mozzarella—are layered inside to melt or form a crusty top.

Most Italian-Americans know about the classic dishes called Manicotti and Cannelloni. They are featured in most Italian restaurants across the country. But to some extent, many aren’t able to describe the difference between the two. The names for these pasta dishes are often interchanged without thinking about how the dish is formed.

“Manicotti” means “small muffs”, and was originally made using crepes rolled around a savory ricotta and grated cheese filling. These can be topped with either a basic tomato sauce for a light first course, or with Ragu (meat sauce) and topped with mozzarella before baking in a hot oven. They are most often made with dried pasta tubes for stuffing that need to be boiled first. The name Manicotti is not found in Italy, as any dish made with crepes rolled around a sweet or savory filling is simply called “crespelle”.

In America many Italians use a pasta dough for Manicotti instead of crepes.  I was brought up with the pasta version and it is probably because my relatives came from southern Italy, while the crepe version probably originated in northern Italian.

Cannelloni means “large reeds”, and are made exclusively from fresh, hand-rolled pasta filled in any variety of ways. One of the most popular is a roasted pork or veal stuffing with vegetables, ground together and stuffed inside the fresh pasta sheets, topped with a Bechamel sauce and Parmigiano-Reggiano. This is a typical northern Italian version, featured in the Florence and Reggio-Emilia provinces.

My interpretation of the two is that they are both made with fresh pasta dough (one that would also be used for lasagna) but the fillings and sauce are quite different.  Manicotti is covered with a tomato sauce while Cannelloni is covered with a Bechamel sauce. I also do not care to use the dried pasta tubes for Manicotti sold in the supermarket, as they are not very tender and they are difficult to fill. I prefer to make fresh pasta dough for Lasagna, Manicotti and Cannelloni. I use the same pasta recipe for all three dishes. Dried pasta shells, however, are perfectly fine for Stuffed Shells.

I have included recipes for the homemade pasta and the different fillings with healthier ingredients than are often used in preparing these dishes. 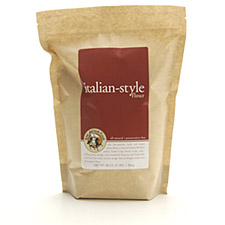 To Complete the Dish:

Mix all the ingredients in a large bowl. Refrigerate until needed.

To make the dough:

Mix the flour, egg, salt and water together in the large bowl of a processor.  Process until the dough forms a ball. Coat lightly with olive oil and allow it to rest covered for 30 minutes.

After the pasta dough has rested roll out sheets with a pasta roller to a thickness you can just about see your hand through. With the roller, about the 5th. or 6th. setting for thickness.

Place the sheets on a pastry board and cut into 4″ x 6″ rectangles. You should get 12 of them.

Cook in boiling water for 4 minutes, drain and put into a bowl of cold water. Preheat the oven to 375 degrees F.

Take a dish towel and spread it on the counter. Place a pasta rectangle on top of the towel so that the long side is facing you. Place 1/3 cup of filling along the edge of the pasta. Moisten the other edge of the pasta with a wet finger. Gently roll the pasta around the filling making a tube (jelly roll style using the towel to help). 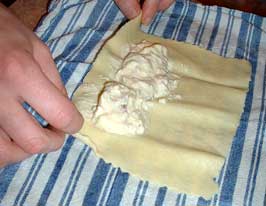 Oil a casserole dish large enough to hold the manicotti and ladle some tomato sauce on the bottom of the dish.

Place the filled manicotti in the casserole dish and repeat until all the pasta is filled. 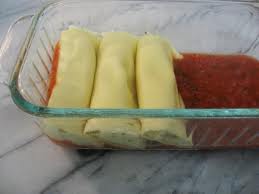 Pour the remaining tomato sauce over the filled manicotti. Sprinkle with Parmesan cheese. Cover with aluminum foil and put in the oven. Bake for 45 minutes removing the foil the last 20 minutes of baking. 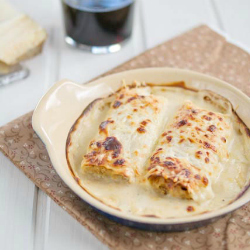 Follow directions for making the pasta noodles in the recipe above for Manicotti.

Dice the chicken breast into 1/2-inch pieces and place into a large mixing bowl. Add spinach, sun-dried tomatoes, mozzarella, pepper and salt, and mix thoroughly.
Arrange pre-cooked pasta sheets on kitchen towels and place two or three rounded tablespoons of filling mixture down the center of each pasta sheet and carefully roll pasta tightly around the filling. Place the rolled cannelloni, side by side, into a greased ovenproof shallow baking dish.

Pour sauce over cannelloni covering completely.
Sprinkle grated Parmesan cheese over top of sauce. Cover with aluminum foil and bake at 350°F for approximately 20 minutes. Remove foil and continue to bake for an additional 20 minutes.
Optional: garnish with fresh diced tomatoes, and basil or Italian parsley.

The milk should be cold or at room temperature. If the liquid is too hot, the roux won’t have time to properly disperse in the liquid before the mixture comes to a boil; this is what causes sauces to lump.
The main thing to watch for here is scorching. Stir often with a rubber spatula, especially at the bottom and edges of the pan, so that the mixture doesn’t stick and begin to burn. If it does, immediately pour the sauce into another pot and continue to cook over very low heat.

If you use Wondra flour, skip the step of adding it to the shallot mixture and just whisk it into the cold milk.

Whisk in the milk all at once, and bring to a simmer, whisking all the while, until the mixture begins to thicken. Turn the heat to very low, and simmer, stirring often with a whisk and scraping the bottom and edges of the pan with a rubber spatula, for 10 minutes, until the sauce has thickened and lost its raw flour taste. Season with salt and pepper.

Bring a big pot of water to boiling , and preheat your oven to 350 F.

Combine the olive oil, red pepper flakes, sea salt, and garlic in a cold saucepan. Stir while you heat the saucepan over medium-high heat. Saute just 45 seconds or so until everything is fragrant – you don’t want the garlic to brown. Stir in the tomatoes and heat.  Simmer for 15 minutes. Remove from heat and let cool.

Combine the ricotta, egg, spinach and salt in a medium bowl. Mix until combined, then stir in the mozzarella. Set aside.

Cook the shells according to package instructions in well-salted water – until al dente. If you overcook the shells, they will tear as you attempt to fill them. Drain, place on kitchen towels so they do not stick together and let cool long enough to handle with your hands.

Spread 1/3 of sauce across the bottom of each prepared pan. Fill each shell about halfway with ricotta filling, and arrange in a single layer in the pan. If you have extra filling, you can divide evenly and add it to the filled shells.

Ladle the remaining sauce over the shells, cover with foil and bake for 30 minutes, uncover and bake for 15 minutes or until the shells are cooked through. Sprinkle with grated Parmesan cheese.