The history of southern tomato pie is largely based on conjecture. Some accounts point to 19th century Shaker recipes for pies with ripe tomatoes, cream, and bacon. David Shields, a historian of southern food and the author of Southern Provisions: The Creation and Revival of a Cuisine, writes that savory tomato pies have roots in the south as far back as the 1830s when they included meat.
The version made today with mayonnaise and shredded cheese has origins in the 1950s. Nancie McDermott, the North Carolina-based author of Southern Pies: A Gracious Plenty of Recipes, From Lemon Chess to Chocolate, says she’d put the pie in the “modern-classic category,” surmising that it’s a product of 20th-century magazine editors, Junior League cookbooks and Southern Living magazine all coming up with tasty ways to make use of summer’s abundance.

And, here is my version:

For regular crust:
Pulse flour, butter, sugar, and salt in a processor until moist crumbs form.
Transfer mixture to a 9-inch pie pan and with floured fingers press the dough evenly into the bottom and up the side of the pan.
Freeze until firm, 10 to 15 minutes; prick all over with a fork. Bake at 350 degrees F.until golden, pressing with a spoon if it puffs up, about 25 to 30 minutes; cool for 10 minutes before filling. 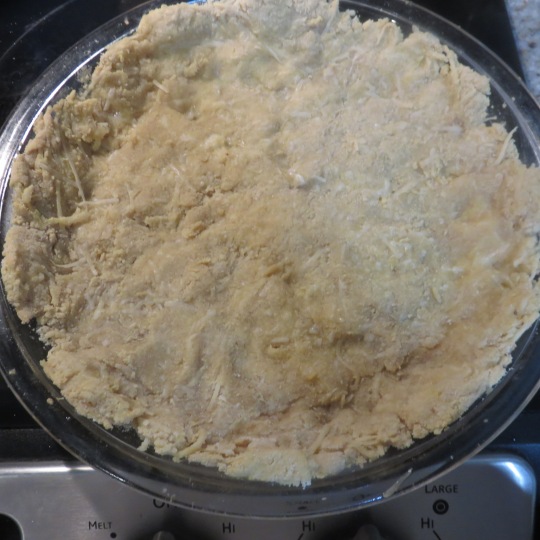 For low carb crust:
In a 9-inch pie plate mix parmesan cheese, almond flour, oat fiber, egg, bacon fat, and salt with a fork. Press onto the bottom and sides of the pie plate. Bake for 12 minutes at 350 degrees F. Cool for 10 minutes before filling.

Mix mayonnaise and remaining shredded cheddar cheese together. Spread the mixture over the sliced tomatoes, spreading the topping to the edges of the crust.

Sprinkle dried basil over the top.
Raise the oven temperature to 375 degrees F and bake the pie for about 30 minutes until browned and bubbly. Let the pie rest for at least 10 minutes before serving. The pie is also good served at room temperature.