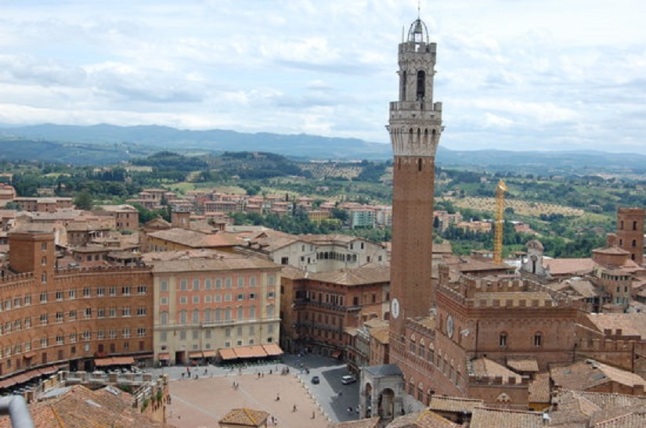 The Province of Siena is located in central-southern Tuscany. The main agricultural products are wheat, grapes, fruit and silk. Chianti wine is produced here, as well. The town’s 13th-century main square, the Piazza del Campo, is still the city’s symbolic and physical heart. Piazza del Campo is the ideal Italian piazza, a huge space reached by winding streets that suddenly converge in front of the city’s town hall. The twice-a-summer bareback horse race, Il Palio, are popular events. The city’s Museo Civico is in the Piazza del Campo, where you’ll find beautiful frescoes, like the collection painted by Simone Martini and the Allegory of Good and Bad Government created by Ambrogio Lorenzetti’s Sala della Pace. Commissioned by the city council in the 14th century, at the height of the city-state’s power, the frescoes depict on one side a city at peace and, on the other, a tyrant-ruled Siena in ruins with armies descending on one another. In the Piazza Grande in Montepulciano, a festival of love stories in the Tuscan tradition is held, where players dressed in costume, narrate the stories. The Medieval folklore is continued in Montepulciano, with the combat of the Bravio delle Botti, during which athletes compete by pushing 176-lb barrels.

Few dishes are more Tuscan than Bistecca Fiorentina, grilled steak from the prized Chianina cattle.  Other typical delicacies are pici (a thick, handmade spaghetti), ribollita, a vegetable, bread and bean soup, roasts, stewed or grilled game, cacio pecorino – a hard, salty Italian cheese, often used for grating and made from sheep’s milk, mushrooms, tripe, wild boar and cold cuts made from the Cinta Senese, the famed black pig with a white stripe, depicted in some famous 15th Century paintings. 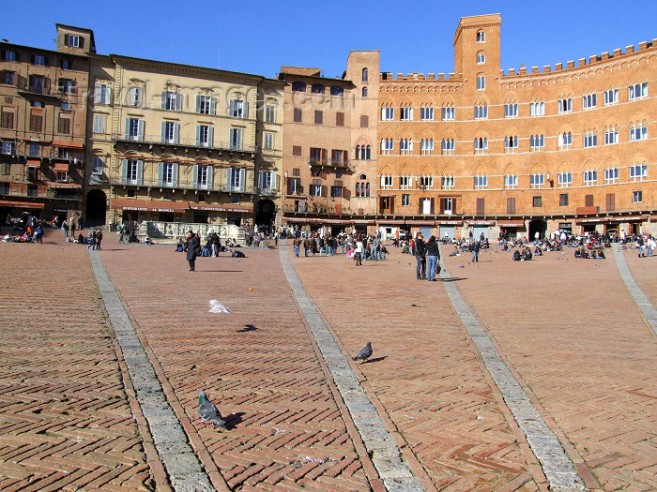 Osteria-style lunches tend to be simple meals of small plates containing sausage, local meats, such as prosciutto and salami, panzanella, meatballs and different types of frittata accompanied by carafes of the house wine. Seafood from the Tuscan coast, may consist of Calamari Eggplant Parmesan (crispy strips of battered calamari with chunks of aubergine topped with cheese) or fresh fish, such as  amberjack baked with potatoes, zucchini and olives.

Sienese sweets are not particularly well-known, but two treats — Panforte and Ricciarelli are typical of the province’s desserts. The former, with its spices and dry fruit, is reminiscent of a slightly hard Christmas fruit cake. The Ricciarelli are soft almond-based cookies with a crunchy top and the flavors of honey and vanilla.

Some Traditional Recipes From Siena

Trim the chicken livers of any sinews and veins and set them on paper towels to dry for about 20 minutes.

In a large skillet, melt the butter in 1 tablespoon of the olive oil. Add the chopped onion, sage and rosemary and cook over moderately high heat, stirring occasionally, until the onion is softened, about 5 minutes. Stir in the minced anchovy and capers and cook over low heat until the onion is lightly browned, about 8 minutes longer. Scrape the mixture into a medium bowl.

Add the remaining 3 tablespoons of olive oil to the skillet. Season the chicken livers with salt and pepper, add them to the skillet and cook over high heat until browned, about 2 minutes. Turn the chicken livers over and cook for 1 minute longer. Stir in the onion mixture. Add the cognac and carefully ignite it with a long match. Cook the livers until the flames subside.

Discard the herb sprigs and scrape the contents of the skillet into a food processor; let cool slightly. Pulse until chunky, then season with additional salt and pepper, if it is needed.

Place the baguette slices on a large baking sheet and toast them for about 15 minutes, until they are golden and crisp. Spread the baguette toasts with the chicken liver and serve.

Place a piece of pancetta inside each hen, along with a sage leaf, a bay leaf and 2 of the olives.. Sprinkle salt and pepper all over the outsides of the hens and rub into the skin, along with some of the olive oil at the same time. Wrap a slice of pancetta or prosciutto around each hen, stretching the meat to cover as much of the hen as possible. Set the hens in the baking pan.

Roast for 45 minutes, then turn down the oven to 325 degrees F. and continue roasting 30 to 45 minutes longer, or until the hens  are cooked.. Serve with the pan juices as a sauce.

Panforte is an Italian confection that is a cross between fruitcake, candy and honey cake and is a specialty of Siena, Italy that dates back to the 13th century.

* To toast nuts, preheat the oven to 350° F.  Place nuts in a single layer in an ungreased shallow pan or rimmed baking sheet. Bake 5 to 10 minutes, stirring once or twice during toasting to aid in even browning, or until they are golden brown. Remove the pan from the oven and place the nuts on a plate to cool

Brush an 8-inch Springform Pan with the butter. Cut a piece of parchment paper to fit the pan bottom. Brush with paper with butter and fit into pan bottom.

In a small bowl, combine cake flour, bread crumbs and almonds or hazelnuts; evenly scatter over sides and bottom. Pat gently into place and set aside..

Preheat the oven to 300° F and adjust the oven rack to the center position.

In another small bowl, combine the remaining 2 tablespoons of cake flour and 1/2 teaspoon cinnamon; set mixture aside and save for the top.

In a medium saucepan over low heat, combine the honey and sugar. Cook, stirring occasionally to prevent scorching, until the mixture comes to a full boil; remove from the heat. Stir in candied fruit and almonds or hazelnuts. Sift in flour mixture; stir until well blended. Pour batter into prepared pan. Smooth the top with the slightly wet palm of your hand. Sift reserved cinnamon-flour mixture over the top.

Place cake in the center of the oven rack. Bake 30 minute or until panforte just starts to simmer around edge of the pan. Remove from the oven; cool completely on a wire rack.

Loosen the cake from the pan by running a small knife around the perimeter and remove the sides of the springform pan. Invert onto a wire rack, letting excess cinnamon flour fall away. Use a knife to peel away the parchment paper. Invert panforte again and transfer onto a wire rack. Dust top with powdered sugar.

When cool, it can be wrapped in several layers of plastic wrap and a layer of aluminum foil and stored in an airtight container for several weeks or frozen for up to six months. Serve at room temperature. Before serving, dust lightly with additional powdered sugar. Cut into small wedges to serve.

Leave a Reply to Marisa Franca @ All Our Way Cancel reply

you're only as good as your last hair cut