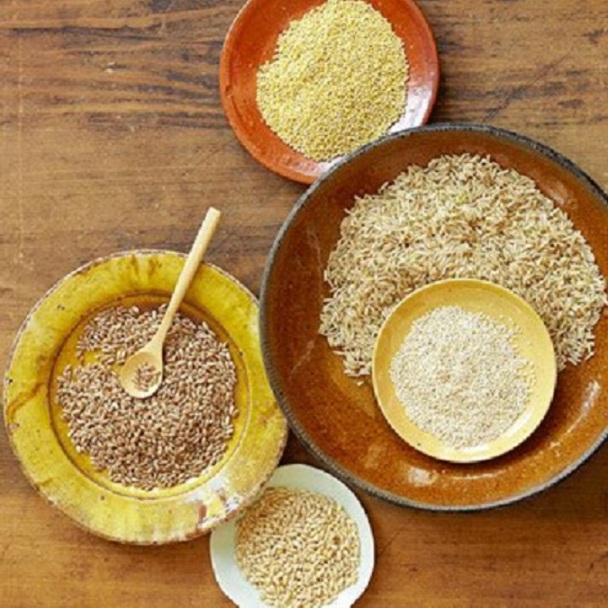 Whole grains generally are packed with nutrients and fiber, which aid in healthy digestion and weight management. These are the “good carbs” that help balance your diet and can fill you up.
Time-saving tip: cook extra grains and store portioned leftovers in the freezer — you’ll be ready when you need them for a recipe.

Farro is popular in Italy and, more recently, in North America and other European countries as well, for its roasted, nutty flavor and distinctive chewy texture. Farro’s tough husk makes it more difficult to process than other commercially produced grains, but that husk also helps protect the grain’s vital nutrients. With a higher fiber and protein content than common wheat, farro is also especially rich in magnesium and B vitamins. As a type of wheat, farro is unsuitable for those with celiac disease, gluten intolerance or a wheat sensitivity or allergy. As with all grains, pearled farro will take less time to cook.

Rinse farro. In a medium saucepan bring 2 cups of water to boiling. Stir in farro. Return to boiling; reduce heat. Simmer, covered, for 20 to 25 minutes or until farro is tender. Drain off any excess water and discard.

Stir in cooked farro and diced chicken. Cook and stir until heated through. Ladle chili into serving bowls. Top each serving with cheddar cheese.

Note* Chili peppers contain volatile oils that can burn your skin and eyes. When working with chili peppers, wear plastic or rubber gloves. If your bare hands do touch the peppers, wash your hands and nails well with soap and warm water.

Buckwheat Groats are soft white seeds with a mild flavor, but when toasted they develop a more intense flavor. Groats can be steam-cooked like rice for salads and side dishes or ground into fresh flour. Buckwheat flour makes delicious pancakes. Buckwheat groats are gluten-free seeds from a plant related to rhubarb. The outer husk is pulled away and the grain-like fruit is harvested and eaten. First cultivated in Southeast Asia thousands of years ago, kasha eventually took root in Eastern Europe, where it became a classic side dish. Buckwheat is very nutritious and provides a complete protein, including all the essential amino acids. Use buckwheat groats in any recipe that calls for whole grains. Be sure to purchase buckwheat groats that have been toasted.

In a medium saucepan bring 1-1/2 cups water to boiling. Stir in buckwheat groats; reduce heat. Simmer, covered, for 5 to 7 minutes or until tender (you should have about 2 cups of cooked groats). Set aside.

In a large nonstick skillet heat 1 tablespoon of the oil over medium-high heat. Add onion and garlic; cook and stir for 2 to 3 minutes or just until the onion begins to soften.

Let stand at room temperature while you prepare the beef.

Cook beef pieces in hot oil about 4 minutes or until medium  (145 degrees F), turning once halfway through the cooking time.

Amaranth is often popped like popcorn and mixed with honey, molasses or chocolate to make a popular treat in Mexico called “alegría” (meaning “joy”). Although amaranth derives its name from the Greek for “never-fading flower,” it is its highly nutritious seeds, not its vibrant red blooms, that are its most valuable asset. Like buckwheat and quinoa, amaranth is an especially high-quality source of plant protein including two essential amino acids, lysine and methionine. Amaranth is packed with iron and calcium and its fiber content is triple that of wheat. Amaranth is completely gluten-free and suitable for those with celiac disease. It is an especially digestible grain, making it a good choice for people recovering from illness.

Place amaranth in a small bowl. Stir in 1 cup boiling water. Cover and let stand for at least 1 hour.

Sprinkle pork with sage and toss to coat. In a large nonstick skillet brown pork in hot oil over medium-high heat. Transfer pork to the prepared baking dish.

Add mushrooms, onion and garlic to the same skillet. Cook and stir about 5 minutes or until the onion is tender. Stir in sweet potato cubes and 1 cup water. Bring to boiling.

In a small bowl stir together 1/4 cup cold water, the cornstarch and 1/4 teaspoon of the salt; stir into the mixture in the skillet. Cook and stir until mixture thickens.

Pour the mixture over the pork in the baking dish. (Sweet potatoes will not be done yet.) Bake for 30 minutes.

Remove the baking dish from the oven and increase the oven temperature to 450 degrees F.

Add soaked amaranth and any liquid remaining in the bowl. Stir until combined.

Using a large spoon or ice cream scoop, drop about ¼ cup of the biscuit dough into eight mounds on top of the stew.

Return the baking dish to the oven and bake for 15 minutes or until the biscuits are browned and a toothpick inserted in the center of a biscuit comes out clean.

The quinoa plant is a relative of beets, spinach and Swiss chard, but we treat its seeds as we would a grain, preparing and eating them in much the same way. Available in light brown, red and even black varieties, quinoa is filling and has a mellow flavor. It is a good source of manganese, iron, copper, phosphorous, vitamin B2 and other essential minerals and has the highest protein content of any grain. It is especially high in lysine, an amino acid that is typically low in other grains. Quinoa’s protein is complete, containing all nine essential amino acids – a rarity in the plant kingdom. Quinoa is gluten-free and easy to digest.

While it’s best to rinse all grains before cooking, pre-washing is especially advisable for quinoa, in order to remove the bitter saponin coating on its outer hull that sometimes remains after processing. To do so, simply run cold water over quinoa in a fine-meshed strainer, rubbing the seeds with your fingers. (Avoid soaking quinoa, however, as saponins can leach into the seeds.)

After rinsing, combine 1 cup quinoa with 2 cups water in a medium saucepan. Bring to a boil. Cover, reduce heat to low, and simmer until quinoa is tender, about 15 minutes, or until the grains become translucent and the germ appears as a thin white ring around each grain. This recipe will yield 3 cups of cooked quinoa.  Quinoa holds lots of water, so you have to make sure you drain it thoroughly after it’s cooked. Fluff with a fork.

In a large bowl stir together cooked quinoa, salmon, onion, 2 tablespoons chives and the garlic.

In a medium bowl stir together panko and lemon pepper seasoning; then add milk, eggs, egg whites and oil, stirring until combined. Add the panko mixture to the salmon mixture; stir until well mixed.

Bake about 25 minutes or until tops are golden and an instant-read thermometer inserted in center of a cup registers 160 degrees F. Cool in muffin cups on a wire rack for 10 minutes.

Divide arugula among six serving plates. Run a knife around the edges of each cup to loosen; remove cakes from muffin the cups. Arrange on top of the arugula. Serve with lemon wedges and the lemon mustard sauce.

For the lemon-mustard sauce:

A staple of soups and stews, barley is the oldest known domesticated grain and comes in hulled and pearled varieties. Hulled barley is the true whole-grain form, with only the outermost hull removed, whereas pearled barley is polished to remove the bran layer and often the inner endosperm layer as well. Pearled barley is both easier to find and the type called for in most recipes. Barley is an excellent source of fiber (one cup cooked contains 13 grams); its insoluble fiber helps maintain large populations of friendly bacteria in the digestive tract. Additionally, barley has been shown to aid in regulating blood sugar after meals (more so than other grains) for up to 10 hours, Like wheat and rye, barley is a gluten grain and is therefore unsuitable for those with celiac disease or gluten intolerance.

If you cannot find quick cooking barley then combine 1 cup pearled barley and 3 cups water in a pot and bring to a boil. Reduce heat, cover and simmer 45-60 minutes.

In a medium saucepan combine mushrooms, broth and barley. Bring to boiling; reduce heat. Simmer, covered, for 12 to 15 minutes or until barley is tender; drain and reserve the cooking liquid.

Place peppers, cut sides up, in an ungreased 2-quart baking dish. Spoon barley mixture into peppers. Pour the barley cooking water around the peppers to cover the bottom of the baking dish. Cover the dish with foil.

Bake for 30 minutes or until barley mixture is heated through and the peppers are tender. Sprinkle each pepper with the remaining 1/4 cup cheese. Bake, uncovered, about 2 minutes more or until the cheese is melted.