How did finger foods come about? Ratified in 1919, the 18th Amendment to the U.S. Constitution banned the manufacture, sale and transportation of liquor. Even before the law took effect in 1920, Congress passed the Volstead Act, or National Prohibition Act, which outlawed the sale of “intoxicating beverages”—defined as any drink containing 0.5 percent or more of alcohol.

Of course, no amount of legislation could transform all Americans into teetotalers; instead, Prohibition simply drove alcohol consumption underground. Millions of people in small towns and large cities imbibed at secret taverns and bars called speakeasies. Many were drab, makeshift saloons in basements or tenements located in shabby parts of town. Some, however, were fine restaurants in their own right, including New York City’s swanky 21 Club, which featured two bars, a dance floor, dining rooms on two levels and underground passageways leading to a secret wine cellar.

To help soak up the booze and drive up sales, some enterprising speakeasy proprietors began offering more than just popular cocktails of the day. Rather than heavy meals, customers were offered assorted bite-sized canapés to snack.

Even after the 1933 repeal of the 18th Amendment, the practice of serving finger foods at restaurants, bars and cocktail parties lived on and quickly became a popular American culinary tradition. Fannie Farmer’s “Boston Cooking-School Cook Book,”  contained many finger food recipes and became widely used in the United States throughout the 1920s.

Care to whip up some Prohibition-era finger foods at your next holiday gathering? Try the easy recipes below.

On a lightly floured work surface, press each piece into a 2-inch round with the palm of your hand. Transfer to prepared baking sheets, turning once to coat lightly in oil.

Bake until the cheese is bubbling and dough is crisp and golden brown, about 12 minutes.

Bring to a simmer and cook, stirring occasionally, 5 minutes. With a slotted spoon, transfer olives, fruit and herbs to a serving dish; reserve oil for salads.

Preheat oven to 350 degrees F. Transfer figs to a cutting board using a slotted spoon; cut in half. Wrap a pancetta strip around each half. Transfer, seam side down, to a wire rack set on a baking sheet. Bake until pancetta is browned, about 30 minutes. Secure each with a toothpick. Serve warm.

With your hands, mix until well combined and roll mixture into 1-inch balls. Place balls, 1/2 inch apart, on a parchment-lined baking sheet. Bake until balls are golden and cooked through, 25 minutes. Serve warm.

Pour olive oil on a rimmed baking sheet and place in the oven until the oil is hot, 3 minutes.

In a medium bowl, combine chickpeas, cayenne pepper, and cumin seed. Season with salt and toss to combine. Place chickpea mixture on hot baking sheet and spread in a single layer.

Bake until chickpeas are crisp, 10 to 12 minutes. With a slotted spoon, transfer to paper towels and let cool slightly. Serve warm.

Make crostini: Brush baguette slices on both sides with a total of 1 tablespoon oil; season with salt and pepper. Place on a baking sheet, and bake, turning over once, until golden, 10 to 12 minutes. Cool.

Dividing evenly, spoon topping on crostini and garnish with additional Parmesan, if desired.

Bring water, wine, 1 teaspoon salt, and the bay leaf to a boil in a medium saucepan. Reduce heat, and simmer for 5 minutes. Add half the shrimp, and cook until opaque, about 1 minute. Using a slotted spoon, transfer shrimp to a plate, and let cool. Repeat with remaining shrimp. Cut into 1/2-inch pieces.

Whisk together lemon juice, vinegar and remaining 1 teaspoon salt in a medium bowl. Pour in oil in a slow, steady stream, whisking until emulsified. Whisk in creme fraiche. Fold in shallot, chives and shrimp. Cover with plastic wrap, and refrigerate for at least 30 minutes (and up to 4 hours). Serve on crackers. 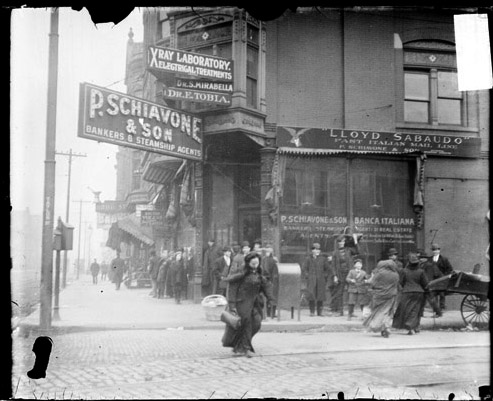