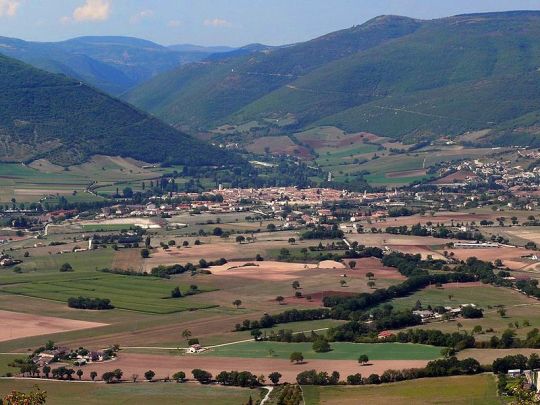 Italy has many places of interest that are in the ‘off the beaten track’ category. One such place is Sabina. Sabina is the ancient region in the North-Eastern Province of Lazio.
The Sabine hills are a chain of mountains that lie between the river Tiber in the west and the town of Rieti in the east. The river Nera flows in the north and the river Aniene in the south. The highest peak in the Sabine Hills is Monte Pellecchia.

The Sabina has been inhabited since prehistoric times and remains of a human settlement and tools dating from the Palaeolithic era, (60.000-30.000 B.C.) have been discovered throughout the area. The Sabini, a tribe from the Adriatic coast, arrived in the area around the ninth or tenth century B.C. and founded the cities of Reate, Trebula Mutuesca and Cures Sabini. Thanks to its strategic position close to the river Tiber and the Salaria road, Cures (close to modern-day Talocci) became rich and controlled most of the surrounding lands. Cures was gradually absorbed into the Roman state in 290 B.C. After a destructive earthquake in 174 B.C., the territory was reorganized and new agricultural systems were introduced. The main focus was to increase production and supply the Roman market with olives and livestock. 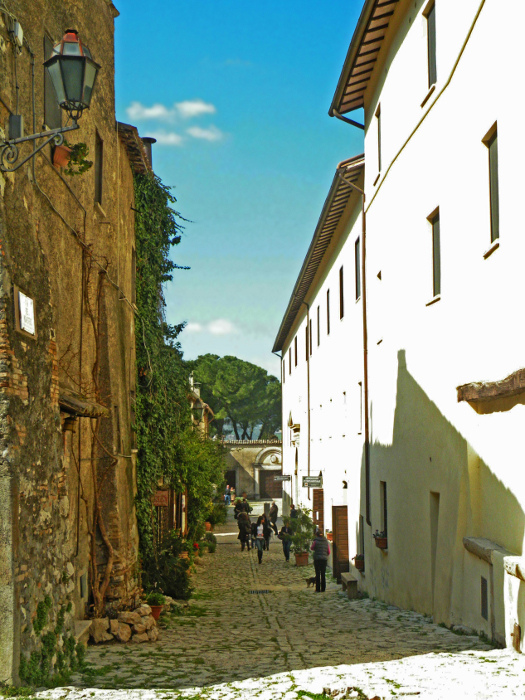 The period following the decline of the Roman empire was characterized by repeated invasions, depopulation due to the plague and the lack of a centralized government. It was during this time that Farfa Abbey was established and the abbey played a fundamental role in the history of the area. The abbey belonged to the Benedictine order, a powerful organization with its own political and economic interests. The monasteries during this time period contributed to the spread of knowledge in an almost completely illiterate world. Farfa Abbey became rich under the protection of the Lombard dukes and, after 775 A.D., brought a certain amount of economic and agricultural development to the area. 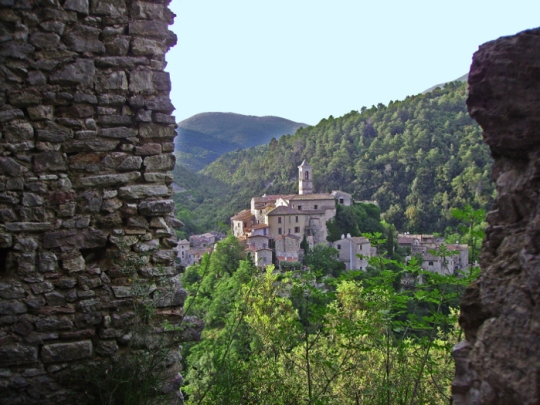 During this same period the population abandoned old settlements in the valley bottoms in favor of the more easily defended hilltop sites. Almost all of the villages and towns in the Sabina were founded during the period between the ninth and the eleventh century A.D. and many of them were vassals of the abbey. Almost the entire population lived within the walls, going out to work in the fields during the day. During the twelfth century A.D., the Sabina saw the gradual decline in the power of the abbey and the growth of the Papacy and the Roman nobles. During the Renaissance, some of the medieval castles were transformed into baronial palaces, most notably in Roccasinibalda, Collalto and Orvinio, while other completely new palaces were built, for example, Palazzo Camuccini at Cantalupo and Palazzo Orsini at Toffia.

During the eighteenth century the population moved into the surrounding countryside, building up the farming community. This process took place in the lower Sabina (closest to the Tiber valley), where the fertility of the soil allowed the introduction of the “mezzadria” or sharecropping system, under which farmers gave half their produce to the landowner in return for the rent of the land and farmhouse.

The landscape of Sabina is dominated by the hilltop towns, watched over by their original castles and fortresses. Nowadays, the variety of castles in Sabina range from abandoned, ghostly ruins, to beautifully renovated castles that accommodate weddings.

The Sabina region has a rich culinary heritage and has been famous since ancient times for the quality of its food and drink, in particular its olive oil, one of the best in the world.
Other local products include cheese, meat, honey, mushrooms and fruit. Their high quality is thanks to a way of working the land which has resisted industrialization and older, more environmentally friendly methods continue to be used here simply because they work well.

Sabina olive oil is characterised by its low acidity and smooth yet peppery finish, which is a result of both the landscape in Sabina and the main varietal of olive grown (Carboncella). It is the steep hills and rocky limestone which gives the Sabina olive oil its distinctive taste. Sabina olive oil was the first olive oil in Italy to receive the PDO (Protected Designation of Origin) appellation. In the village of Canneto, you will find the oldest (and one of the largest) olive trees in Europe. At over 1000 years old and with a trunk of 23 feet (7 meters) in circumference, this huge tree produces 1600 pounds (800 kilos) of olives every harvest! 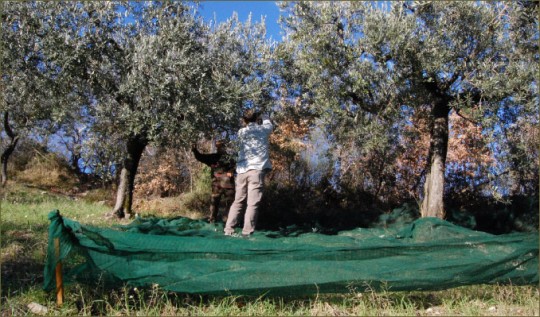 Sabina, like elsewhere in Italy, has many Sagre. Some villages are especially well-known for a particular Sagra. For example, Roccantica is known for its popular ‘frittelli‘ festival in March. A sagra is simply a particular kind of festival that usually revolves around food and usually one specific seasonal ingredient or dish, which is particularly associated with that town or the local area. Sagre (plural) are run by the people who live in the town, so they are real community affairs, where everyone comes together to celebrate the food that they are so proud of. Visiting a Sagra is a great opportunity to sample some genuine, authentic dishes, cooked by people who live in the town.

Some of these specialties are:

Falloni are a kind of wrap, similar to a calzone, that are stuffed with green vegetables before being baked in the oven.They make a great hot or cold snack or a picnic food. You can find falloni in many a forno (bakery) in the Sabina region, particularly the area around Montebuono, Poggio Mirteto, Torri in Sabina and Selci, where they are a local speciality. The falloni can differ depending on which village in Sabina they are made. Around Selci they like to use chard and raw spinach, in other places such as Stimigliano, they put spinach with other vegetables.The shape of the falloni can range from a long thin wrap to a rounder calzone shape. In some villages they cook the vegetables a little first before wrapping in the dough and finish baking them in the oven, while others do not pre-cook the vegetables. Falloni are pretty much exclusive to the Sabina region and are a great example of a regional food with a number of variations.

Also known as strangozzi , this popular Sabina pasta is flat, rectangular and made without eggs. The shape somewhat resembles shoelaces, which is where Stringozzi gets its name – stringa is a shoelace and stringhe are shoelaces. Stringozzi is also popular throughout Umbria, Marche and other parts of the Lazio region. 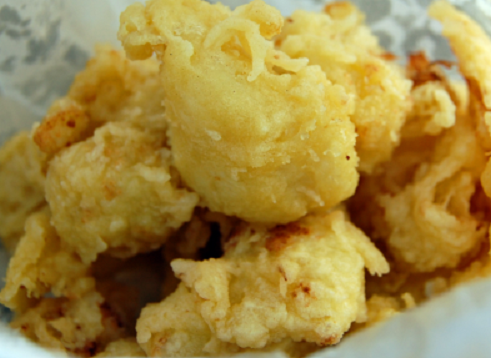 Frittelli, deep-fried savory or sweet bites, are often eaten at some point during a big meal, especially for special occasions. Different types of Frittello may be associated with different occasions, for example a sweet Frittello with raisins is popular at Christmas and Lambs brain can be found on Easter tables.The most common type of Frittelli in Sabina, however, are fried cauliflower florets. Pieces of cauliflower are dipped in batter, fried and then seasoned with a little salt. They are so popular, in fact, that an entire festival was created to celebrate their existence. 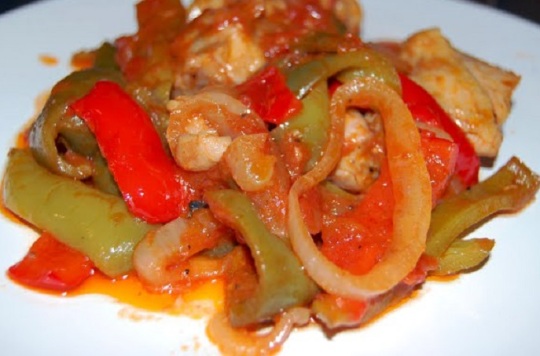 This is a traditional, very rustic Roman dish of chicken with bell peppers, onion and tomatoes.

In a large skillet with a cover, saute the garlic in 1 tablespoon of olive oil. Season the chicken pieces all over with salt and pepper and place in the pan with the garlic. Cook over a low heat, covered, for 45 minutes. Turn the chicken occasionally.

In another skillet, heat the remaining oil and add the peppers and onions. Cook and stir for a few minutes and then add the tomatoes. Season with salt and mix together, cover the pan and cook over a low heat until the peppers are soft.

Pour the white wine over the chicken and cook, uncovered, until all the wine evaporates.

Remove the chicken from the pan and put it in the pan with the onions and peppers. Stir well to mix everything together. Cover again and cook for another 10 minutes.

This pasta sauce is so famous that it is recognised as a traditional dish of Lazio by the Italian ministry of agriculture, food and forestry.

Heat 1 tablespoon of olive oil in a pan and brown the guanciale until crispy and golden. Remove from the pan with a slotted spoon and set aside.

Simmer until the sauce has thickened and lost its ‘watery’ appearance. Add the guanciale back into the pan with the sauce.

Boil the pasta until al dente. When the pasta is cooked, drain the water and then return the pasta to the pan. Pour the tomato sauce over the pasta, mix well, top with the grated cheese and serve.

Pour the water into a mixing bowl and stir in the yeast. Allow it to proof about 5 minutes.

Stir in the wine, olive oil, salt, and anise seeds. Mix well. Add the flour, 1 cup at a time, mixing well after each addition. The dough will be soft. If the dough is still sticky after 5 cups of flour have been added, gradually add more flour, 1 tablespoon at a time, until the dough comes away from the bowl easily.

Transfer the dough to a board or the counter and knead the dough for 2 – 3 minutes. Divide the dough into 12-15 pieces, depending on how big you want the rings.

Roll each piece into a long rope, bring the two ends together and place the rings on a parchment lined baking sheet. Cover with a clean towel and let them rise covered for 30 minutes.

Bring a large pot of water to a boil and add the Ciambelle to the water one at a time. When each ring floats to the surface, use a slotted spoon transfer the boiled ring onto a damp towel.