Marcella Hazan was born on this day, April 15, in 1924 in the village of Cesenatico in Emilia-Romagna. She earned a doctorate in natural sciences and biology from the University of Ferrara. In 1955 she married Victor Hazan, an Italian-born, New York-raised Sephardic Jew, who subsequently gained fame as a wine writer. The couple moved to New York City a few months later and Marcella was a newlywed who did not speak English, transplanted to a country whose knowledge of her native cuisine was not much more than spaghetti covered with what, to her, tasted like overly spiced ketchup. The culture shock was substantial. She found canned peas and hamburgers appalling and for coffee – she described it, “as tasting no better than the water we used to wash out the coffee pot at home”.

Hazan had never cooked before her marriage. As she recounted in the introduction to her 1997 book, Marcella Cucina, “… there I was, having to feed a young, hard-working husband who could deal cheerfully with most of life’s ups and downs, but not with an indifferent meal. In Italy, I would not have wasted time thinking about it. My mother cooked, my father cooked, both my grandmothers cooked, even the farm girls who came in to clean could cook. In the kitchen of my New York apartment there was no one.” She began by using cookbooks from Italy, especially Ada Boni’s cookbook, The Talisman Italian Cookbook, – also my first Italian cookbook. Soon after she realised that she had an exceptionally clear memory of the flavors she had tasted at home and found it easy to reproduce them in her kitchen. “Eventually I learned that some of the methods I adopted were idiosyncratically my own,” she recalled, “but for most of them I found corroboration in the practices of traditional Italian cooks.”

In October 1969 she began teaching Italian cooking classes that were as much about Italian culture and history as about food. She taught students that Italian cooking was really regional cooking, from the handmade noodles and meat sauce of Bologna to the fish and risotto of Venice to the linguine and clams of Naples.

Her recipes tended to use only ingredients that would actually be used in Italian kitchens (with some concessions for ingredients that are not readily available outside Italy). Mrs. Hazan embraced simplicity, precision and balance in her cooking. She emphasised careful attention to detail. In her third book, Marcella’s Italian Kitchen, Hazan laid out her “Elementary Rules” with some 22 commandments. Among them are:

In her honor, the International Culinary Center (ICC)—the only school at which Marcella taught—is launching a scholarship in her name, sending worthy aspiring chefs to the seven-month Italian Culinary Experience, a program that begins at ICC’s campus in New York or California, then continues in Marcella’s home province of Emilia-Romagna in Italy, including staging (apprenticeships) in top restaurants in Italy. To access information and the application, click on the link below.

Recipes for some of Marcella Hazan’s pastas.

Boil 4 quarts of salted water in a large pot.

Remove the tops of the eggplant and cut into 1-inch dice.

Heat a 10-inch saute pan and add the olive oil. When oil is hot, add the eggplant. Cook about a minute, turning the eggplant frequently. Add tomatoes and chili flakes. Turn heat to low and simmer until the oil floats to the top of the sauce. Season with salt and remove from the heat.

Drop pasta into boiling water. When the pasta is nearly done, turn the heat down on the sauce and add the mozzarella, stirring until it dissolves into the sauce.

When the pasta is done, drain and transfer into a large warm bowl. Pour sauce over. Add pecorino cheese and torn basil leaves. Toss and serve at once.

Add the lamb and cook until browned, 5 minutes. Season with salt and pepper and stir. Add the wine and simmer until evaporated, 10 minutes. Add the tomatoes and simmer gently, stirring from time to time, until the fat begins to separate from the sauce, 15 minutes.

Meanwhile, fill a large pot with 4 quarts of water and bring to a boil. Add 1 1/2 tablespoons of coarse salt, cover and return to a boil.
Add the pasta to the pot and stir rapidly with a wooden spoon. Cover and bring back to a boil. Uncover and cook the pasta, stirring frequently, until it is al dente.

Drain the pasta and immediately transfer it to a warmed bowl. Toss with the lamb sauce and the 1/3 cup of grated cheese. Serve at once, passing additional cheese at the table.

(From Essentials of Classic Italian Cooking)

Wash and scrub the clams, dunking them in several changes of fresh water until there are no traces of sand. Discard any that remain open when handled. Place them in a dry skillet in one layer, cover the skillet and turn the heat to high. Cook, checking and turning occasionally to remove each clam as it opens; the total cooking time will be about 10 minutes.

Place the remaining oil and the garlic in a skillet large enough to hold the pasta later and turn the heat to medium high. Cook, stirring, for a few seconds, then add parsley and chili pepper. Stir once or twice, then add tomato. Cook for a minute, stirring, then add the wine. Cook for 30 seconds, then turn off the heat.

Meanwhile, set a large pot of water to boil and salt it. Cook the pasta until it is very firm to the bite, just short of being fully cooked (it should be so firm that you would not yet want to eat it). Drain it, turn the heat to high under the skillet and add the pasta to the skillet, along with the filtered clam juice. Cook, tossing and turning the pasta, until the juice has evaporated. The pasta should now be perfectly cooked; if it is a little underdone, add some water and continue to cook for another minute.

Add the cut-up clams with their oil and the basil leaves; toss two or three times, then serve.

(From Essentials of Italian Cooking)

Mash the garlic with a fork and saute in the olive oil in a pan on medium heat while you cook the spaghetti. Saute until the garlic becomes a deep gold color, then remove and discard it.

Put the onion and cubed pancetta or bacon in the pan and cook until onions are golden and the pancetta is crisp at the edges. Add the wine and let it bubble for 2 minutes, then turn off the heat.

Break the eggs into a serving bowl in which you will toss the pasta. The serving bowl can be warmed in the oven, if it is oven proof. Beat the eggs lightly with a fork, add the cheeses, a liberal grinding of pepper and the chopped parsley. Mix thoroughly.

Add cooked drained spaghetti to the bowl and toss rapidly, coating the strands well. Briefly reheat the onion and pancetta over high heat. Turn out the contents of the pan into the pasta bowl and toss thoroughly once more. Serve immediately.

(From The Classic Italian Cookbook)

Heat butter and olive oil in a pan over medium heat. Add garlic and stir. Before garlic starts to brown, add zucchini and cook, stirring occasionally, until cooked through and starting to brown a bit.

Add cream. Season with salt and pepper. Let cook on medium-low heat until thickened a bit and let simmer until the pasta is done.

Just before mixing with the pasta, stir basil into the sauce and turn off the heat. Toss with pasta and parmesan cheese. 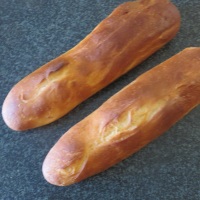