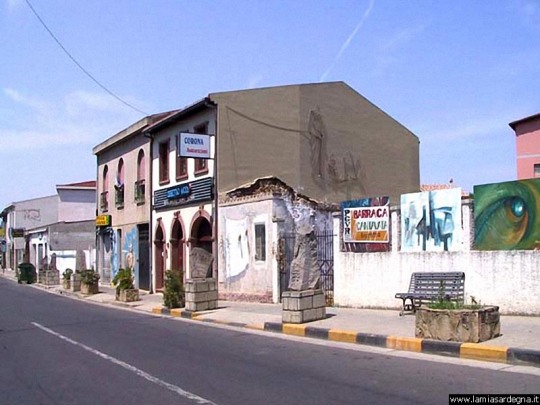 San Sperate has a very ancient history. Recent archaeological excavations have dated the first settlements to the Bronze Age. Following the period of Punic rule in Sardinia, the villages in the San Sperate basin came under Carthaginian rule and four cemeteries from this period have been found. Roman occupation in 238 BC can be documented and the parish church dates to the XVI century. This small village in Sardinia, not far from Cagliari, is known for the “Paese Museo” (Museum Village) and its artistic features. It is a village of murals with more than 300 large wall paintings. Painting the walls of its houses was begun by a local artist, Pinuccio Sciola. In 1968, in the wake of a youth protest movement, Sciola had the idea of turning the village into an open-air “museum village”.  The idea was taken up by other artists such as Foiso Fois, Liliana Canu, Primo Pantoli, Giorgio Princivalle, Gaetano Brundu, Nando Pintus, Giovanni Thermes and Franco Putzolu. They came to San Sperate to add their own different styles and techniques. The result ranged from trompe l’oeil windows, balconies and lines of washing hung out to dry to historic scenes and copies of famous works of art. 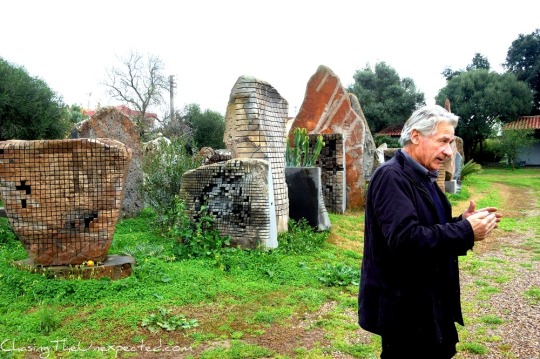 Sciola is also Sardinia’s best known sculptor and there are examples of his work carved from the local stone. His stone sculptures are the living testimony of the art of San Sperate. Limestones and basalts are the materials mainly used by Sciola. He makes a “kind of wound” in each stone, so that the energy of the stone is taken out. His large sculptures resonate when rubbed by human hands or small rocks. However, you can’t image how amazing it is listening to Sciola’s stones, so instead of imagining, you can hear these stones in a documentary about this fascinating artist and his work by playing the video link below:

The murals depict how life was in San Sperate one hundred years ago. They are creations of a changing farming culture with themes of rural life (work in the fields and scenes from the village) in an urban space made more significant by the display of traditional implements, such as olive oil mills, wheat grinding mills, stone tubs, basins and by rows of orange and lemon trees. A Picasso-esque house wall of colorful images and a wall painted to resemble a space for hanging agricultural tools (painted so realistically with shadows that they look ready to be unhooked and used) are just two of the vivid images depicted in the town. There are also curiosities, like a house which appears to be wrapped in paper with a corner torn off or painted groups of people chatting in front of arcades or abstract patterns. Here are a few photos of the murals: 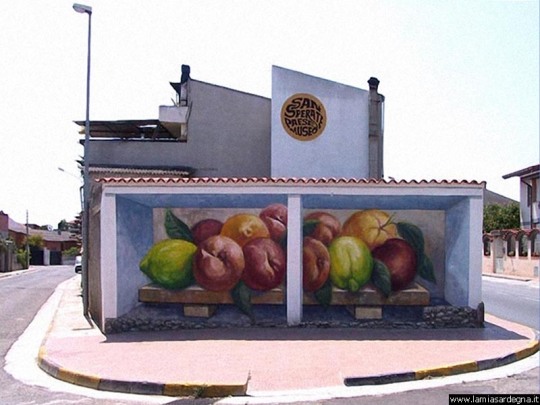 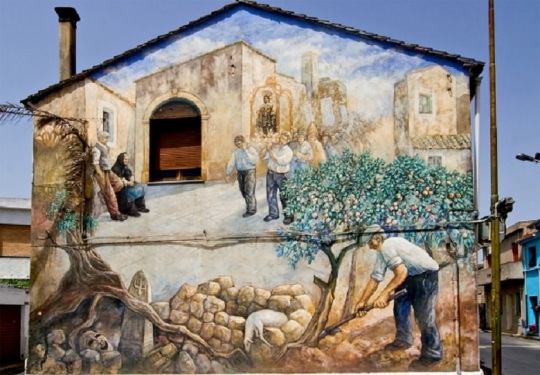 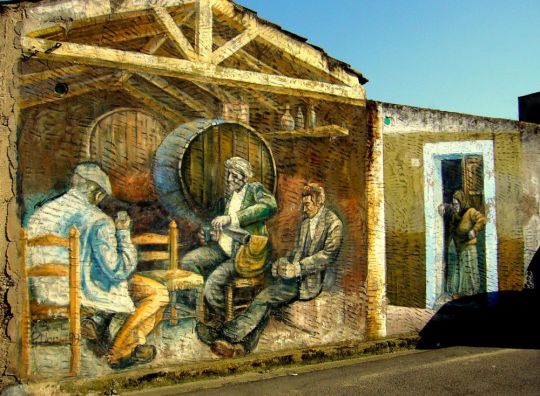 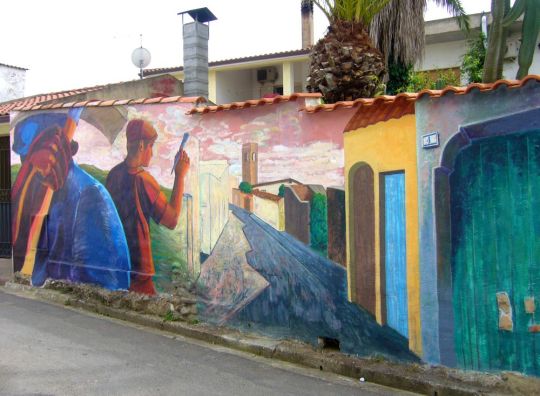 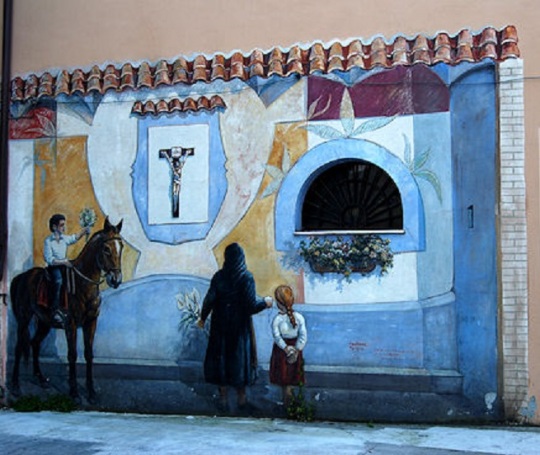 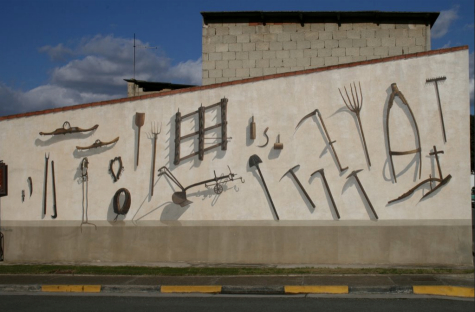 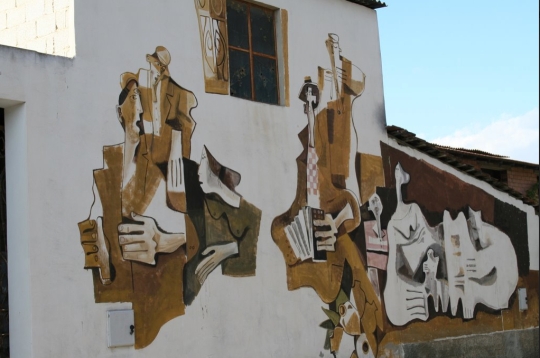 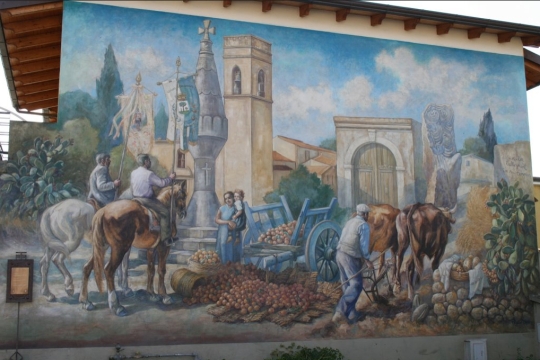 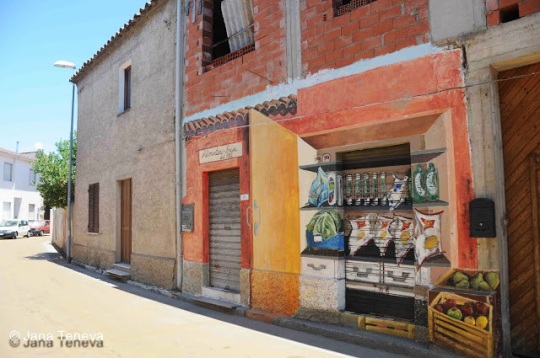 One artist from the Renaissance period, Piero della Francesca, must have been popular because there are several copies of his most famous paintings scattered throughout the village, including one next to a bakery that has an image of a single oven on its wall. 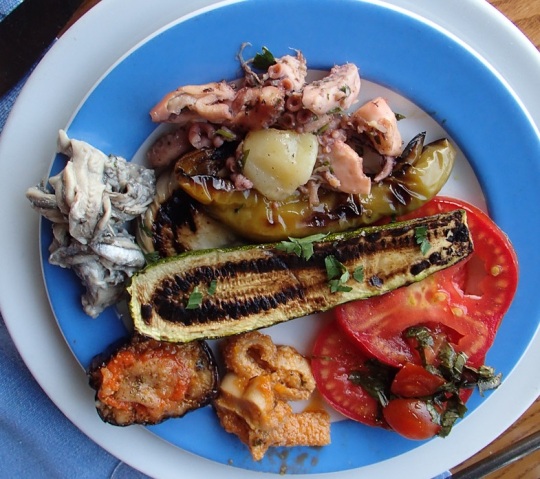 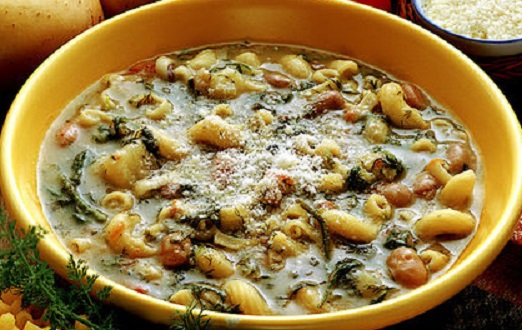 Rinse the fennel fronds, pat them dry and chop them. Save the fennel bulbs for another recipe. Peel and dice the potatoes. Blanch, peel, seed, chop and drain the tomatoes.

Heat the oil in a soup pot, sauté the tomatoes for a minute and as soon as they begin to wilt add the beans, fennel, potatoes and ham. Add 2 1/2 quarts (2.5 l) of water, cover, and simmer for at least two hours.

Remove the ham bone and stir in the pasta. Continue to simmer, stirring occasionally, until the pasta is cooked. Serve with grated pecorino on the side. 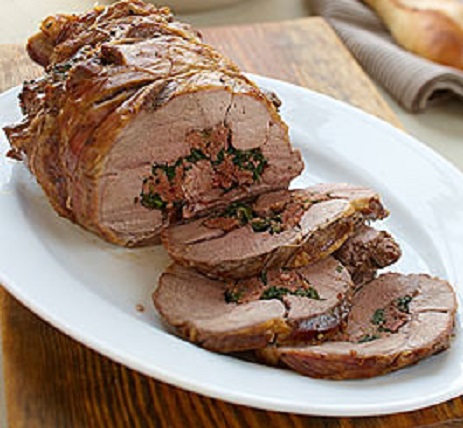 Heat the olive oil in a saucepan or Dutch oven large enough to contain the leg of lamb and sauté the minced garlic, parsley and onion until the onion is translucent. Remove the mixture from the saucepan to a bowl with a slotted spoon, leaving the pan drippings behind. When the onion mixture has cooled, mix it with the sausage, eggs and bread crumbs. Season with salt and pepper. Spread the mixture over the inside of the leg of lamb. Roll the leg up tightly and tie it with twine.

Reheat the pan drippings in the saucepan and brown the meat, turning it to brown all sides. Add the tomatoes, crumbling them between your fingers, add enough water to reach part-way up the sides of the pot and simmer gently for an hour or until the meat is quite tender.

When the meat is done, remove it from the pot. Remove and discard the string, slice the meat and arrange the pieces on a warmed platter. Spoon the sauce over the meat and serve at once. 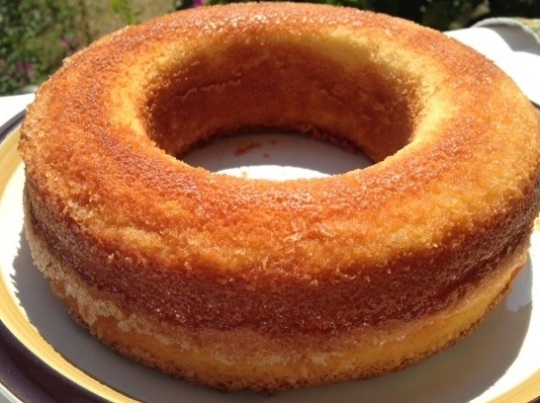 Squeeze the orange, warm the juice slightly and dissolve the saffron in it.

Mash the ricotta with the tines of a fork, mixing until it is creamy in texture and combine it with the sugar, grated orange and lemon zest, eggs and half the orange juice mixed with saffron. Mix well, fold in the flour and baking powder and then pour the batter into a floured ring mold baking pan.

Brush the surface of the cake with the remaining orange juice, sprinkle with sugar and bake until it begins to pull away from the sides of the pan and a toothpick inserted into the center comes out dry, about 40 minutes, but check before then. 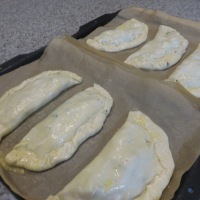 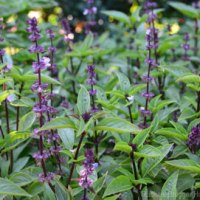