Pumpkins and squash are believed to have originated in the ancient Americas. These early pumpkins were not the traditional round orange upright Jack-O-Lantern shape, we think of today, when you hear the word pumpkin. They were a crooked neck variety which stored well. Archeologists have determined that variations of squash and pumpkins were cultivated along river and creek banks along with sunflowers and beans. Native Americans dried strips of pumpkin and wove them into mats. They also roasted long strips of pumpkin on the open fire and ate them. The origin of pumpkin pie occurred when the colonists sliced off the pumpkin top, removed the seeds and filled the insides with milk, spices and honey. The pumpkin was then baked in hot ashes. Once pumpkins were imported from the Americas to Europe during the 1500s, they were grown everywhere and were cheap, so even the poor were able to enjoy them.

Northern Italy has a long tradition of cooking with pumpkin. The home of pumpkin tortelli is disputed between Mantua and Ferrara. In fact, their origins date back to the times of the Este court in Ferrara which was famous for the refinement of its cuisine and its master chef, Giovan Battista Rossetti, mentioned it in his recipe book in 1584. But the Gonzaga family, ruling in Mantua at the same time, also claimed the recipe as their own. Pumpkin tortelli are a speciality pasta in the provinces of Mantua and Cremona (in Lombardy), Piacenza, Parma, Reggio, Modena, and Ferrara (in the Emilia region). In Ferrara they are called Cappellacci, from the shape of the straw hats typically worn by country folk. Elsewhere, the name tortelli derives from the way the pasta is folded.

Northern Italian and Sicilian cuisines feature a number of pumpkin dishes. Here are a few. 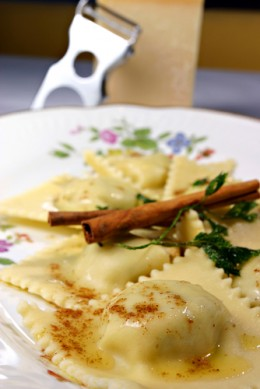 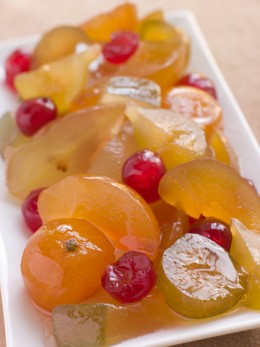 Risotto di Zucca is made by gently sautéing tiny cubes of pumpkin with onions before adding the rice.

Friulian Zucca al forno is a slow-roasted whole pumpkin filled with mascarpone, Emmenthal and Parmigiano-Reggiano cheeses, sautéed onions, wild mushrooms and nutmeg. The natural sugars of the pumpkin caramelize and meld with the cheeses as it cooks.

Zucca alla Veneta are lightly floured pumpkin slices that are sautéed in olive oil and then arranged in layers, with torn basil leaves (and sometimes raisins) scattered over each layer. A dressing made by boiling white wine vinegar with a clove of garlic, salt and pepper is poured over the layered pumpkin slices and left to marinate, covered, overnight.

Sicilian Zucca Agrodolce (pan-fried pumpkin slices marinated in a sweet and sour sauce). The dish is made by frying 6 – 7 cloves of garlic (thinly sliced) in olive oil until golden. Sugar is then added to the pan and cooked to a golden caramel. White wine vinegar is added and the sauce is boiled until it becomes syrupy. Roughly chopped mentuccia leaves are scattered over the fried pumpkin before pouring the hot syrup over. It is left overnight and eaten the following day at room temperature. [Note: mentuccia is wild Italian mint). 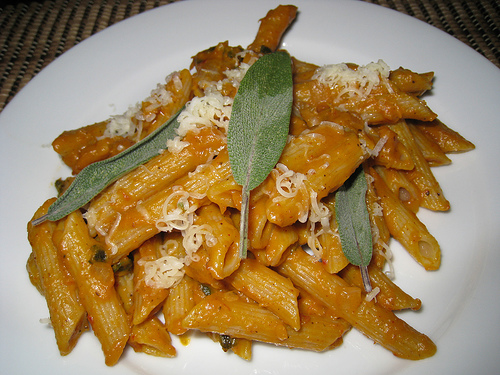 In a large skillet, heat oil over medium. Add onions and cook until soft but not brown, about 5 minutes.

Add cooked pasta to the sauce and toss to coat. If sauce is too thick, add some of the reserved pasta water. Season generously with salt. Serve pasta sprinkled with remaining cheese. 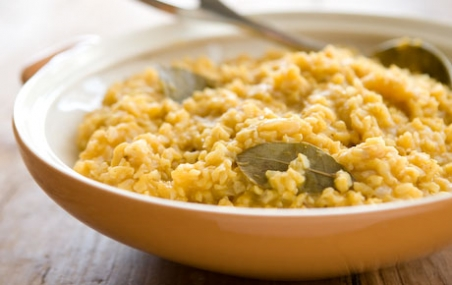 In a large pot, heat oil over medium heat. Add onions and garlic and cook, stirring occasionally, until softened and translucent, 7 to 8 minutes. Add rice and stir to coat with oil. Toast rice, stirring often, until fragrant, 3 to 4 minutes more. Meanwhile, whisk together pumpkin purée and broth in a large bowl.

Stir broth mixture and bay leaves into pot, season with salt and pepper and bring to a boil. Reduce heat to medium low, cover and cook, stirring occasionally to keep rice from sticking to the bottom of the pot, until liquid is absorbed and rice is cooked through and creamy, about 45 minutes. Remove bay leaves. Stir in pecans, if using, and Paremsan cheese. Transfer to a bowl and serve immediately. 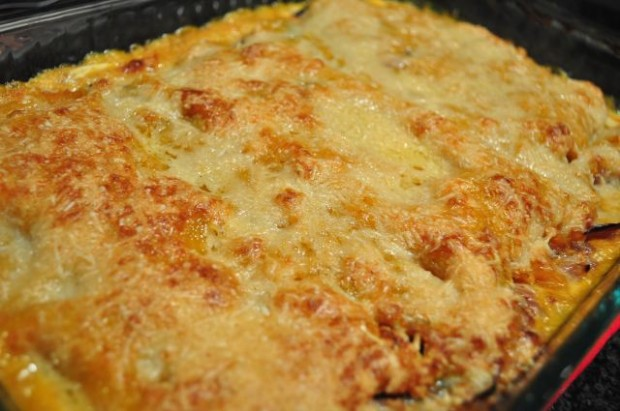 In a medium sized bowl, mix together two cups of the pumpkin, ricotta cheese, eggs, 1/2 cups of the Parmesan cheese and the remaining salt, pepper, sage and nutmeg. Set aside.

Combine the remaining pumpkin, cayenne and the cream. Spread this over the top of the lasagna, being careful to do so evenly. Sprinkle with the remaining cup of Parmesan cheese and dot with butter.

Cover with aluminum foil and bake for 20 minutes. Uncover and bake until golden for 15-20 minutes. 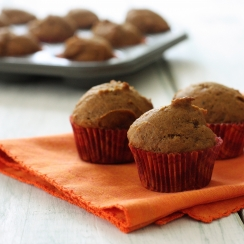 Preheat oven to 350°F. Line a 24 mini muffin pan with paper liners and spray them with cooking spray.

In a medium bowl, combine flour, brown sugar, baking soda, pumpkin spice and salt with a wire whisk. Set aside.

In a large bowl, mix oil, egg, pumpkin puree and vanilla. Beat at medium speed until thick. Scrape down sides of the bowl.

Add the flour mixture, then blend at low speed until just combined. Do not overmix.

Pour batter into prepared muffin cups and bake on the center rack for 15 minutes or until a toothpick inserted in the center comes out clean.

Let the muffins cool at least 20 minutes before eating. 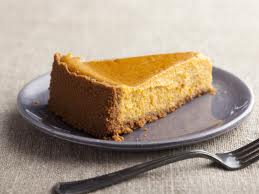 To make crust: mix hazelnuts, sugar, 1 tablespoon of hazelnut liqueur and butter until combined. Press into a 9 to 10-inch springform pan making sure to press mixture on the bottom and up the sides, as well. Set aside.

For filling: in a large bowl mix in order cream cheese, brown sugar, eggs (one at a time) and pumpkin puree.

In a small cup stir remaining 2 tablespoons of hazelnut liqueur, pumpkin pie spice and salt into the evaporated milk. Pour the mixture into the pumpkin mixture and blend until combined.

Pour into crust and bake for 35 minutes or until the center is set. Allow to cool to room temperature and chill in the refigerator before serving.