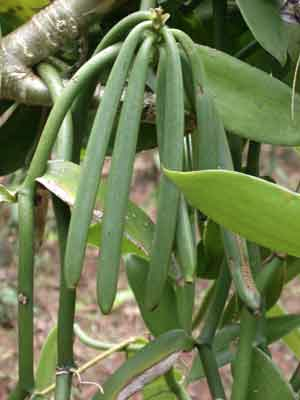 The vanilla bean is actually the fruit of an orchid. The vanilla orchid is the only one among over 20,000 varieties of orchids that produces something edible. The plant is a climbing vine that must have some type of support and partial shade. The vanilla orchid produces waxy greenish-yellow flowers that grow in clusters.

In the 14th century, the Spanish conquistadors under Cortez, watched Montezuma, Emperor of the Aztecs, pulverize vanilla beans, combine them with chocolate and serve it as a drink to his guests. By the middle of the 15th century, the Spanish were importing it to Europe to use as a flavor in the manufacturing of chocolate. When chocolate was first introduced to Europe in the sixteenth century, it was cinnamon that was usually used as a flavoring ingredient. It was not until the eighteenth century that vanilla took over that role, however, vanilla really came into its own as an ingredient in ice cream.

As European explorers traveled the forests of Central and South America, vanilla became more common in Europe. Europeans followed the example of the tribes in the New World and used vanilla as a nerve stimulant and as an aphrodisiac. The Spanish were responsible not only for importing the vanilla pod to Europe, but also for supplying Europe’s languages with a name for it. In Spanish it is vainilla, a diminutive of vaina, sheath, a reference to its long narrow pods.

By the early 1800’s vanilla plants were growing in botanical collections in Germany and France. Horticulturists were experimenting with conditions for its growth. From Europe, it was transported to Reunion, Mauritius and the Malagasy Republic. It there that workers discovered that hand pollination of the flowers was necessary to produce vanilla beans.

Vanilla is the second most expensive spice after saffron, because growing the vanilla seed pods is labor-intensive. Despite the expense, vanilla is highly valued for its flavor, which author Frederic Rosengarten, Jr. described in The Book of Spices, as “pure, spicy and delicate” and its complex floral aroma depicted as a “peculiar bouquet”.  As a result, vanilla is widely used in both commercial and domestic baking and in the manufacture of perfumes.

Interestingly, fresh vanilla beans have no taste or aroma. They must undergo an extensive curing process that results in the release of vanilla with its distinct aroma and flavor. In Mexico the traditional curing process involved spreading the beans on dark blankets in the sun wilting.  More commonly today, oven wilting is used for the initial dehydration. Then the vanilla is placed in special boxes wrapped in blankets or mats, to sweat. Next, the vanilla is alternately sunned and sweated for several days until the beans turn a deep chocolate-brown. Afterward, they are placed in sweating boxes or in beds covered with waxed paper to dry slowly at a moderate temperature for 45 days. Then they are kept for about three months in closed containers to develop their full aroma. 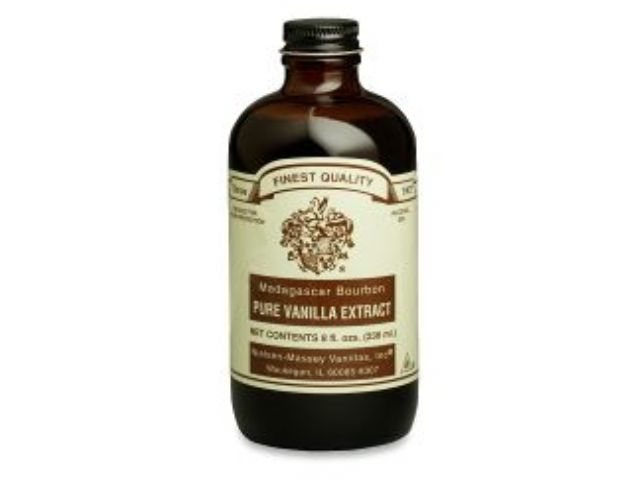 Vanilla Extract is the most popular and the easiest way that vanilla can be used. Here are a few tips for when to use the extract:

Vanilla beans not only impart flavor to dishes, but add a special visual element. Here are a few tips for when to use the vanilla bean:

How To Use  Vanilla Beans

The first thing you need to do is split the bean lengthwise, using a paring knife. Then scrape the seeds free from both sides of the bean pod with the edge of the knife and add to whatever it is you are cooking. If you are cooking a sauce, add the pod to the mixture as well. After the mixture has steeped, remove the pod, but DON’T THROW IT AWAY!  Rinse the pod and allow it to dry at room temperature. Bury the used, dry vanilla pods in your sugar for a wonderful vanilla flavored sugar.

You can also use all whole milk, no cream in this recipe

In a medium saucepan, combine the cream, milk and sugar. Cook over medium heat until the mixture comes to a simmer. Remove from heat. Scrape the vanilla seeds into the milk, add the bean pod and let sit for 30 minutes. Strain into a clean bowl removing the vanilla bean pod. Cover and refrigerate for at least 2 hours or overnight. Transfer to an ice cream maker and freeze according to manufacturer’s directions.

Without an ice cream maker: Spoon chilled mixture into a shallow metal pan; freeze until almost firm, about 3 hours. Break into chunks; purée in a food processor. Pack into an airtight container and freeze until firm, about 1 hour. 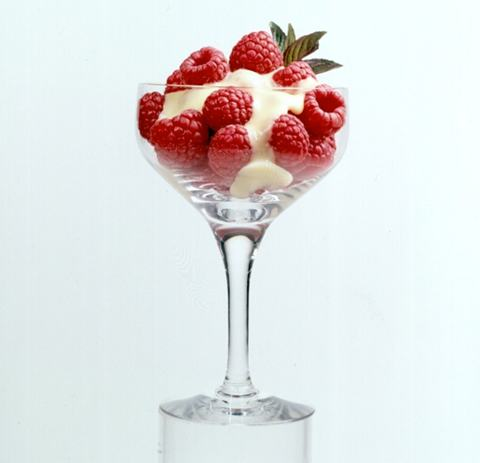 Steeping the vanilla seeds in the Marsala adds flavor to this classic Italian dessert.

In a small saucepan, whisk the Marsala with the sugar and vanilla bean seeds and bring to a boil. Remove from the heat and cool.

Meanwhile, bring a medium saucepan of water to a simmer; turn the heat to moderately low.

In a large stainless steel bowl, whisk or beat the egg yolks at low speed to break them up. Gradually add the Marsala mixture and beat until smooth.

Set the bowl over the simmering water in the saucepan. Beat the egg yolk mixture until it is hot and foamy and leaves a ribbon trail when the beaters are lifted, about 10 minutes.

Don’t cook the zabaglione for too long, or it will curdle. Transfer the bowl to the ice water bath and let stand, whisking the zabaglione occasionally, until cooled.

Cover and refrigerate for about 1 hour or until thoroughly chilled.

Spoon the chilled zabaglione into small serving dishes and garnish with the raspberries. 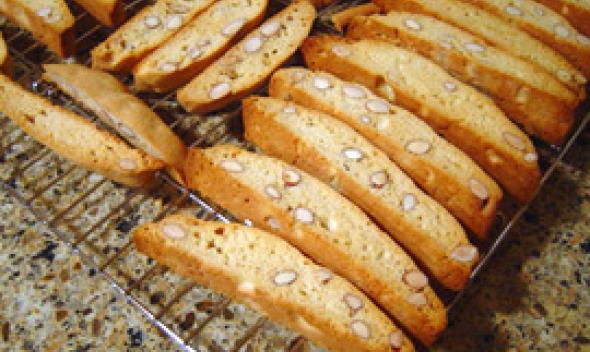 Preheat the oven to 325 degrees F. Position rack in center of oven.

With a small knife, scrape the seeds from the vanilla bean and place in a small bowl. Add the sugar and use your fingers to mix the vanilla evenly into the sugar. Set aside.

Line a baking sheet with parchment paper. Divide the dough into 3 pieces. On a lightly floured surface, shape each piece of dough into a log that is about 1 1/4 inches in diameter.

Place the logs on the baking sheet, spacing them as far apart as possible. Bake in the center of the oven until lightly browned, about 30 minutes.

Place the logs on a cutting board and let them cool slightly. With a serrated knife, cut the logs on the diagonal into 1/2-inch-thick pieces. Place on the baking sheet, cut side down.

Bake until lightly browned, about 15 minutes, turning them once. Transfer the cookies to a rack to cool. Store in an airtight container.

This lighter version of a classic dessert delicacy is the perfect ending to a rich meal.

Sprinkle the gelatin over the 3 tablespoons milk and let sit for 15 minutes to soften.

In a saucepan, stir the milk, half and half, sugar, and vanilla bean over medium heat until it just starts to boil. Remove from heat.

In a large bowl, whisk together the mascarpone and the sour cream until smooth.

Stir the gelatin mixture into the heated milk mixture and stir well for at least 2 minutes or until bits of gelatin are no longer visible.

Pour the mixture through a strainer into the mascarpone mixture to remove any bits of hard gelatin.

Spray  six 1/2 cup custard molds with cooking spray and pour the panna cotta into each mold. Chill overnight. Serve inverted onto a plate with a fruit or chocolate garnish. 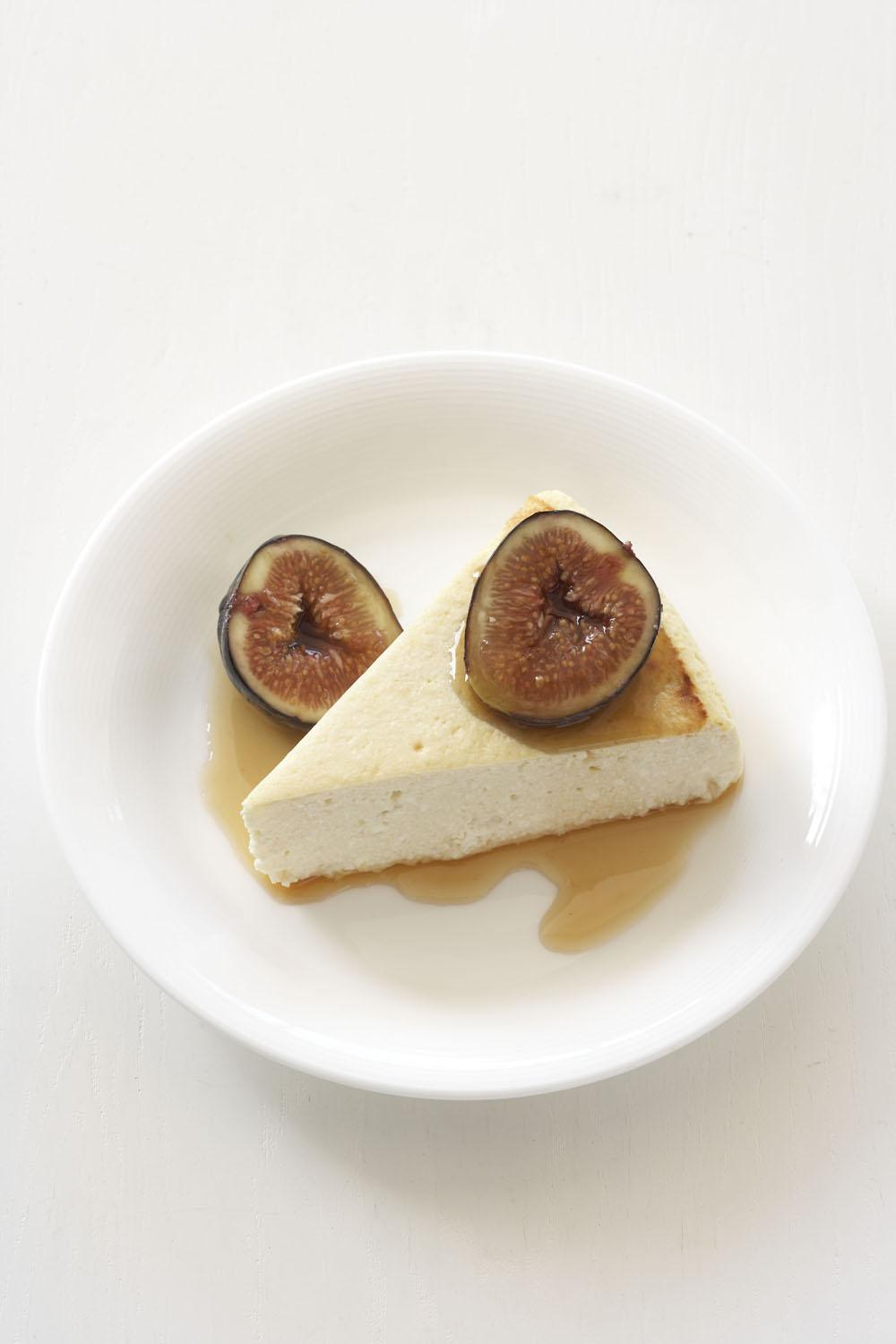 Whisk the egg substitute with the tapioca starch in a large bowl until fully incorporated. Add the ricotta, yogurt, agave nectar, stevia, vanilla and lemon zest.

Whisk together until the ingredients are fully combined.

Coat a 9-inch springform cake pan with cooking spray and place the pan in a deep baking dish — one that’s a little larger than the cake pan.

Pour hot water in the baking dish until it reaches halfway up the sides of the cake pan.

Pour batter into the pan.

Place in the oven and bake until the cheesecake is cooked through and set, about 60 minutes. Remove the cake pan from the water bath and cool completely on a wire rack.

Cover and refrigerate until fully chilled. Combine the figs and Marsala in a small bowl and set aside at room temperature until the cake is ready.

To serve: remove the cheesecake from the pan. Place slices of cake on serving plates and spoon the figs alongside, topping them with any Marsala remaining in the bowl.