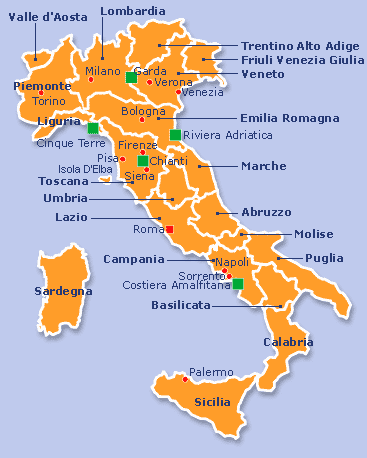 Since the history of Italian food is so rooted in the regional cultures, it is interesting to take a look at the main regions of the country and what kinds of food products and dishes each one is known for. The most well known regions in Italy that are noted for their culinary distinctions are the following: Abruzzo-Molise, Apulia, Calabria-Lucania, Emilia-Romagna, Liguria, Lombardy, Naples-Campagna, Piedmont, Rome-Lazio, Sardinia, Sicily, Tuscany, Umbria-Marche and Veneto. These areas can be split up roughly into three categories: northern, central and southern Italy.

Northern Italian cuisine is characterized by less use of olive oil, pasta and tomato sauce and more use of butter (or lard ), rice, corn (for polenta), meat and chesses for cream sauces.

Much of what the rest of the world considers Italian food comes from the central regions of Italy. Velvety smooth olive oils, world-famous cheeses, savory cured meats and rich tomato sauces grace the tables of this region. Beef dishes can be found more often here and the hills of Tuscan and Umbria are known for their wild boar. Both coasts share their love of locally caught seafood and the mountainous countryside is known for its hearty fare.

From the pizza of Naples to the countless types of dried and fresh pasta, the food of the south is the heart of Italy. This is the cuisine found in most Italian-American cuisine. Here you will find rich and spicy tomato sauces and the almost exclusive use of olive oil in cooking. In fact some of the best olive oil comes from this region, but very little of it is exported. The south is home to citrus fruits, fields of durum wheat for pasta, olive groves and vineyards. The sea is used to its fullest extent with all manner of seafood included in dishes from tuna to anchovies and clams to sea urchins.

Pigs are grown throughout Italy, and though many become sausage, salami or prosciutto, just as many do not. It is the one meat that is found in all the regions of the country. Historically, while a good portion of the hog was used for cured meats, many other recipes and uses for pork became popular in Italian cuisine. Each region has its own unique way of cooking pork. Here are five pork chop recipes to illustrate the regional variations of this cuisine. 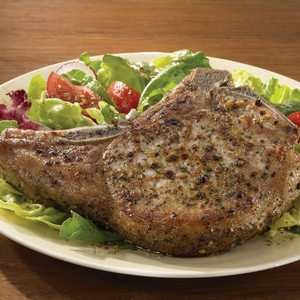 Trim all the gristle and fat from the cutlets, then cut them in half, leaving the halves attached only along the bone, so that the cutlets will open like a book.

Open the meat and fill each with a slice of prosciutto and one of cheese, trimming their edges so nothing sticks out.

In a skillet with a cover large enough for the meat to lie flat, heat the oil with the bay leaves. Place the pork chops in the pan and brown them on both sides, turning them carefully.

Season the meat with the minced herbs, salt and pepper, cover, and cook over a medium heat for about 15 minutes, turning the meat occasionally; should the meat look as if it’s drying out or over browning, reduce the heat. 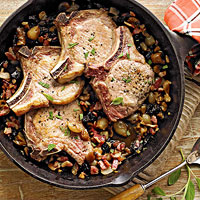 In an extra-large skillet cook pancetta over medium heat until fat is rendered and the pancetta is brown but not too crisp. Using a slotted spoon, transfer pancetta to a paper towel-lined small bowl; set aside.

Sprinkle all sides of the pork chops with salt and pepper. Add pork chops to the hot drippings in the skillet; cook for 4 to 6 minutes or until golden brown, turning once halfway through the cooking time. Using tongs, transfer chops to a plate.

For the sauce: add butter to the skillet; heat over medium heat until no longer foamy. Add onions and chestnuts to the hot butter; cook about 5 minutes or until golden brown, shaking the skillet occasionally. Stir in garlic and thinly sliced or dried sage; cook about 30 seconds more or until fragrant. Add broth, Marsala, vinegar and honey. Bring to boiling.

Cook, uncovered, about 5 minutes or until liquid begins to turn syrupy, using a wooden spoon to scrape up any browned bits from the bottom of the skillet. Stir in dried plums and cooked pancetta; season to taste with pepper.

Return pork chops and any accumulated juices to the skillet; spoon sauce in skillet over chops. Cover skillet; reduce heat to low and simmer gently for 12 to 15 minutes or until pork is cooked through. Serve sauce over pork. If desired, garnish with small sage leaves. 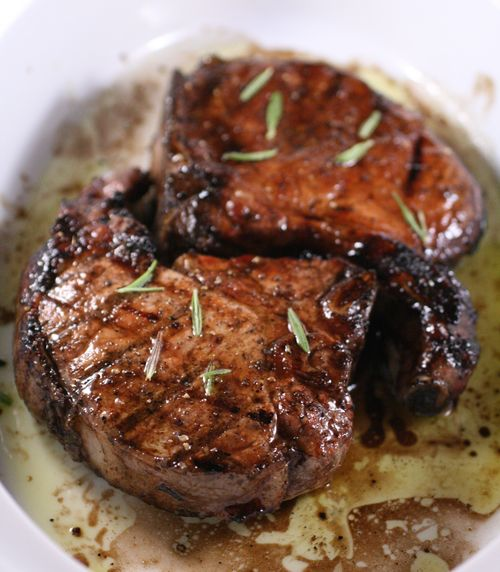 Season the pork chops with salt and pepper. In a large nonstick skillet over medium-high heat, warm the olive oil. Add the chops and cook, turning once, until golden brown, 3 to 4 minutes per side. Transfer to a plate.

Reduce the heat to medium. Add the honey, vinegar and thyme and cook until the liquid is thickened and reduced by half, about 5 minutes. Stir in the broth and bring to a simmer.

Return the pork chops to the pan, cover and cook for 3 to 4 minutes. Uncover and cook, turning the chops occasionally and basting with the sauce, for about 15 minutes more for medium doneness. Transfer the chops to a platter and cover loosely with aluminum foil.

Increase the heat to medium-high and simmer until the sauce is syrupy, about 3 minutes. Remove the pan from the heat and stir in the butter until it is incorporated. Season with salt and pepper. Drizzle the sauce over the pork chops. Serves 4. 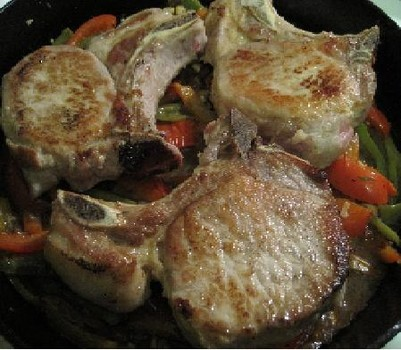 Heat the olive oil in a large, heavy skillet with a cover. Add garlic and cook until lightly browned. Season chops with salt and pepper.

Place chops in the skillet and brown on both sides. Add mushrooms, bell peppers, tomatoes, oregano and wine.

Cover and cook over low heat about 1 hour or until tender.

Cut a pocket from the side of each chop, inserting knife almost to the bone. Slice parallel to surface, widening pocket as you go. Do not cut through to edge.

Add chops to the skillet and cook until browned on both sides. Add broth and wine to the skillet, heat to boiling. Reduce heat to low, cover and simmer 1 hour, or until chops are tender.

Transfer chops to platter, keep warm. Increase heat to high and boil pan juices until reduced to 3/4 cup. Pour over chops and serve.