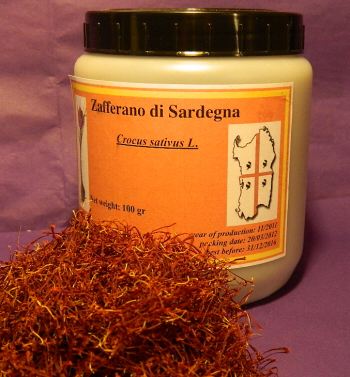 While strolling through Citta’ Della Pieve, a northern Umbrian town during the Festa dello Zafferano held each fall, you will pass shops with baskets of lilac colored crocus petals and zafferano packets. During this festival, sprays of crocus flowers decorate textile shop windows, toy shop entrances and the Gelaterie which features ice-creams and yogurts made with saffron. In the Piazza Matteotti, a young chef teaches a cooking class with saffron starring in every dish: yellow risotto, saffron bread and a dessert. Just around the corner in the Palazzo della Corgna, you’ll find the embroidery work of the local women, including textiles of yellow hues, dyed with saffron. In the covered market area, you’ll see saffron-dyed candles and even creams and soaps made with saffron. 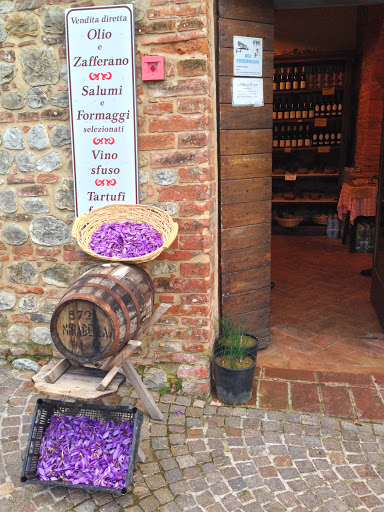 Saffron, the red-orange stigmas from the center of the fall flowering crocus plant (Crocus sativus), is the world’s most expensive spice. That’s because each flower provides only three stigmas. One ounce of saffron = approximately 14,000 of these tiny saffron threads. The tiny threads of saffron must be handpicked from the flower. The yellow stamens which have no taste are left behind. This spice comes either powdered or in threads. 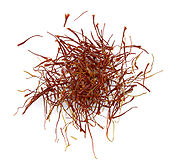 The ancient Greeks and Romans prized saffron for its use as a perfume. They scattered it about public spaces such as royal halls, courts and amphitheaters. When Emperor Nero entered Rome, they spread saffron along the streets and wealthy Romans made daily use of saffron baths. They also used saffron as mascara, stirred saffron threads into their wines, strewn it in the halls and streets as a potpourri and offered it to their deities. Roman colonists took saffron with them when they settled in southern Gaul, where it was extensively cultivated until the AD 271. Saffron cultivation in Europe declined following the fall of the Roman Empire. For several centuries thereafter, saffron cultivation was rare or non-existent throughout Europe. This was reversed when the Moors came from North Africa to settle most of Spain, as well as parts of France and southern Italy. Two centuries after their conquest of Spain, the Moors planted saffron throughout the southern provinces of Andalucia, Castile, La Mancha and Valencia.

During the Renaissance, Venice stood out as the most important commercial center for saffron. In that period saffron was worth its weight in gold and, even today, it is still the most expensive spice in the world. Unfortunately, its high price led to its adulteration which, in those times, was severely punished. Henry VIII, who cherished the aroma of saffron, condemned adulterers to death. 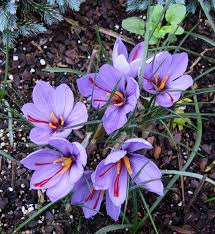 Saffron grows on the Navelli Plain in the Province of L’Aquila and is considered by many to be a major product of the Italian Abruzzo region. How a flower of Middle Eastern origin found a home in Italy can be attributed to a priest by the name of Santucci, who introduced it to his native home over 450 years ago. Following his return from Spain at the height of the Inquisition, Santucci was convinced that the cultivation of saffron was possible in the plains of Abruzzo. Nevertheless, even today, the harvesting of saffron is difficult work and great skill is needed to handle the stems without damaging the product or allowing contamination from other parts of the plant.

Italian saffron is also produced on family owned farms in Sardara, a town located in the center of Sardinia, Italy. The production of saffron on the island of Sardinia and especially in Sardara has been a tradition for centuries with more than 60% of Italian saffron being produced in this region

An essential ingredient in Risotto Milanese, saffron is also used in many other dishes across Italy. For example, the fish soup found in Marche region, uses saffron for its red coloring in place of the more traditional tomato in the recipe. This coloring property is also widely appreciated in the production of cakes and liqueurs and, for centuries, by painters in the preparation of dyes. Its additional curative powers have long been believed to help digestion, rheumatism and colds.

American saffron or Mexican saffron is actually safflower, a member of the Daisy family and the same plant from which we get safflower oil. Although its dried, edible flowers do yield the characteristic yellow color, it has no flavor and is not suitable as a saffron substitute. Turmeric, also known as Indian saffron, is an honest substitute for saffron, but it is a member of the ginger family. Use turmeric sparingly as a saffron substitute, since its acrid flavor can easily overwhelm the food. Turmeric is also used to stretch powdered saffron by unscrupulous retailers. Unfortunately, there is no truly acceptable substitute for saffron. Its distinctive flavor is a must for classic dishes such as paella, bouillabaisse and risotto. If your recipe calls for saffron, do yourself a favor and use the real thing to fully appreciate the intended result. 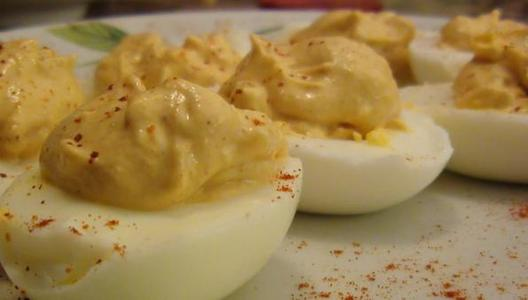 A classic Italian appetizer that is often served with olives.

In a small saucepan, heat the butter over medium-low heat until melted. Add the flour and stir until smooth. Over medium heat, cook until the mixture turns a light, golden color, about 5 minutes.

Meanwhile, heat the milk in a separate saucepan until just about to boil. Add the hot milk to the butter mixture, a little at a time, whisking continuously until very smooth. Bring to a boil. Cook 10 minutes, stirring constantly, then remove from the heat. Season with salt and nutmeg and set aside until ready to use.

To make the stuffed eggs:

Peel the eggs, cut them in half and remove the yolks. Set the white halves aside on a serving platter.

Mash the yolks in a small bowl.

Add the saffron to the bechamel sauce and mix well. Add the mashed yolk and stir until the egg yolks are completely dissolved.

Fill eggs halves with a little of the sauce and garnish with ground saffron. 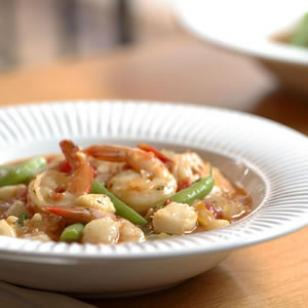 Stir in tomatoes, clam broth and green beans. Bring to a simmer. Cover, reduce heat and simmer for 2 minutes. 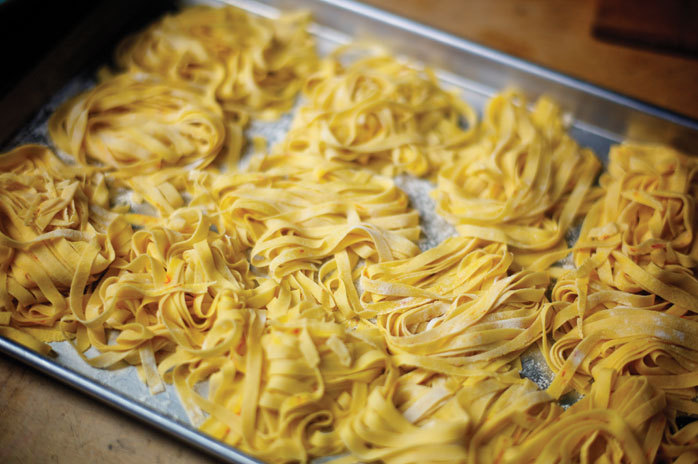 Place the saffron water in a food processor with the 3 eggs and puree.

Add remaining ingredients and process until the dough forms a ball.

Preparing the dough with a hand crank pasta machine: Divide dough into 3″ x 2″ pieces. Dust the dough lightly with flour on both sides. Start with the first thickness on the machine and gradually crank in steps to the desired thinness.

After the first pass through the machine, fold the dough in half to help develop the gluten. To make good straight edges, fold the ends of the pasta sheet to the center and then rotate it 90º so that the folded edges are on the sides. Place rolled pasta sheets on floured kitchen towels.

After all the pasta sheets are formed, cut the pasta into spaghetti or fettuccine on the pasta machine.

As soon as you cut the pasta, either place on a floured flat surface or hang on a pasta drying rack. Homemade pasta will stay fresh in the refrigerator for a few days, or it can be air dried on your pasta rack and then stored in an airtight container. Fresh pasta can also be frozen in a vacuum bag. Do not keep dried fresh pasta unrefrigerated because it contains eggs in the mixture.

Cooking Hand Made Pasta: Drop the pasta into a large pot of salted boiling water and boil until tender or “al dente” for about two to three minutes. Do not over-cook the pasta. Drain well and serve with your favorite sauce. Saffron flavored pasta is especially good with butter and parmesan cheese. It also makes a delicious side dish to Chicken Marsala. 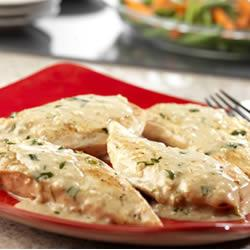 Season chicken with salt, pepper and dredge in flour.

Heat the olive oil in a heavy skillet over medium high heat. Add the chicken and saute until lightly browned on both sides. Then transfer to another plate; cover with foil to keep warm.

Add butter to the same skillet and heat until its starts to sizzle. Add the shallots and saute for about 5 minutes..

Add the wine to the pan. After a minute, slowly whisk in the cream, blending completely. Add the saffron and simmer for a minute.

Add the chicken back into the pan, lower heat, cover and cook for 5 minutes or until the chicken is done. Plate chicken, pour sauce over the top and garnish with chopped chives. 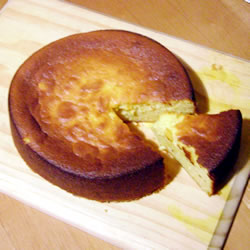 Place the oranges in a large saucepan and add enough water to cover. Bring to a boil and cook for 2 hours over medium heat. Check occasionally to make sure they stay covered with water. Allow the oranges to cool, then cut them open and remove as much white pith as possible and the seeds. Process in a blender or food processor into a coarse pulp.

Preheat the oven to 350 degrees F. (190 degrees C) Thoroughly grease a 10-inch round cake pan and line the bottom with parchment paper. Sprinkle with powdered sugar.

In the large bowl of an electric mixer beat the eggs and sugar together until thick and pale, at least 10 minutes. Mix in baking powder and saffron. Stir in the pureed oranges.

Bake until a small knife inserted into the center comes out clean, about 1 hour. Allow the cake to cool in the pan. Tap out onto a serving plate when cool.