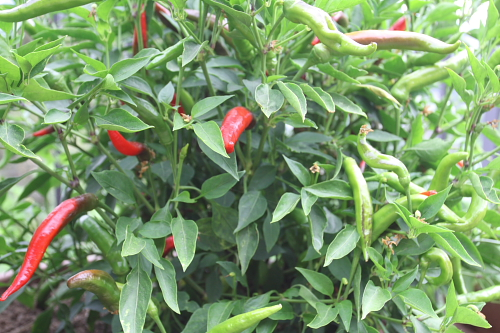 One of the most beautiful colors of summer in southern Italy is the deep red of chili peppers, strung together and hung out to dry—especially in Calabria. This region, located at the tip of the boot of Italy, is the main producer and consumer of chili pepper, or peperoncino as it is called in Italian.

The chili pepper plant belongs to the Capsicum genus and there are 85 varieties of this species of spicy chili that in Italy goes by the name peperoncino, an ingredient that gives spice to dishes throughout the world. The different types of peperoncino can be distinguished based on their level of sweetness. On the Scoville scale, which measures the “heat” of peppers, peperoncino ranges in the middle. The heat or spice of the peperoncino comes from capsaicin, a substance present in the peppers. There are several varieties of peperoncini grown in Calabria; varieties, such as the Italian Cayenne pepper, the Naso di Cane, or “the nose”. The Ciliegia (cherry), Amando (loving), and Sigarette (cigarette). In southern Italy, these little red peppers are often called diavoletti (little devils); in Calabria and Molise regions, they are called diavulillu; and in the region of Basilicata, they are called diavulicchiu. 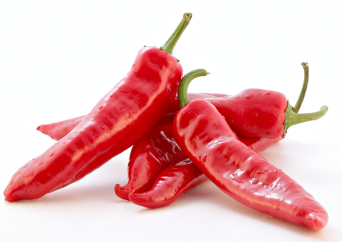 Typically, hot countries develop hot, spicy cuisines as a natural means of cooling down the body through perspiration. All hot peppers contain a natural substance that produce a burning sensation in the mouth that can cause watery eyes, a runny nose and perspiration. This is all a plus in the hot climates where perspiration helps to cool the body. The chili pepper has no flavor or odor, but acts directly on the pain receptors in the mouth, throat and eyes.

Chili peppers were grown as a food crop as early as 4000 BC in Central America; but it wasn’t until the arrival of the Spanish in the mid-16th century that the plant was introduced to the rest of the world. Very quickly, trade routes began carrying chili peppers to Europe, Africa, India, the Middle East and Asia. In the Americas, it held great value as a bartering tool in the spice markets.

Today, this spice seems to be growing in popularity around the globe. In northern Italy, where chili pepper was virtually unknown just a couple of generations ago, peperoncino is now more and more appreciated and incorporated into Italian cuisine. Spicy food lovers add it to virtually everything – fish, vegetable pasta sauces, soups, stews, pizza, as well as egg dishes. As a general rule of thumb, peperoncino is not recommended for delicate and creamy preparations, but is more suitable for robust sauces and recipes. In southern Italy, ground chili peppers are sometimes added to salumi and cheese. Crushed red pepper that one finds on the table in an Italian restaurant is made from dried hot chili peppers. Also, hot peppers can be preserved in oil to produce a flavorful, spicy oil

A few of the traditional Italian dishes used with these fiery devils are: 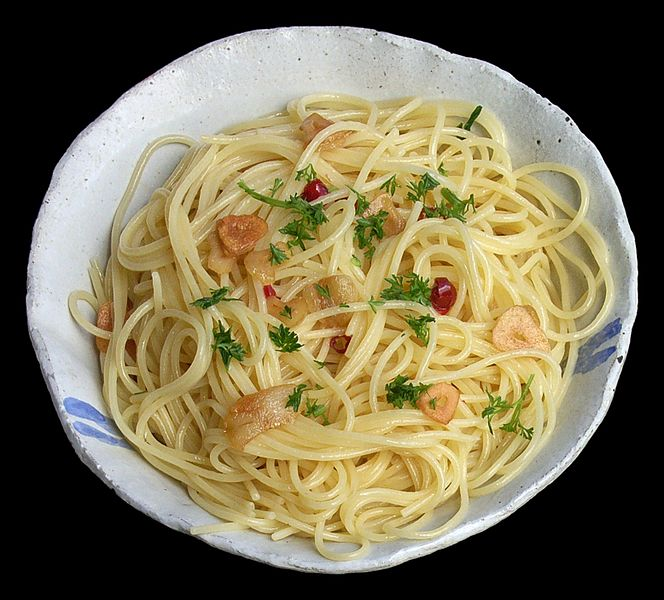 “Spaghetti with Garlic and Oil” is a traditional Italian pasta dish, said to have originated from the region of Abruzzo, although it is popular across the country. This is a classic Roman dish, one that most Italian men know how to make. It’s also quite popular as a late night snack among friends, for example, after a night out at the theater.

Bring 6 quarts of lightly salted water to a boil and add the spaghetti.

Meanwhile, mince the garlic, crumble the red pepper and sauté them in the oil in a large skillet until the garlic begins to brown. Turn off the heat (the garlic will continue to brown; you don’t want it to overbrown and become bitter).

When the spaghetti is cooked, drain and transfer it to the skillet. Mix well. Garnish with parsley.

Serve with grated Parmigiano or Pecorino Romano on the side. Some people like it, whereas others, especially the traditionalists , shudder at the idea.

This is another well-known Italian American spicy, tomato based sauce used for seafood pasta dishes or over steamed mussels. It is not served in Italy.

Place the canned tomatoes in a large bowl and with clean hands crush the tomatoes, so they break up into small pieces.

In a 5-quart Dutch oven heat the olive oil over medium heat until hot, but not smoking, about 40 seconds. Add the bay leaves and stir them in the oil for about 10 seconds. Add the garlic and cook for 1 minute until it starts to turn golden, then add the onions, carrots and oregano. Cook the vegetables until they are very brown, about 15 to 20 minutes. Stir occasionally, just enough to prevent them from burning.

Add the crushed tomatoes with their juice, the tomato paste, salt, pepper, crushed red pepper and water (white wine or clam juice can be added depending on the intended use) and bring to a boil. Lower the heat and simmer, partially covered, until the sauce level has reduced by 2 or 3 inches and the sauce is thick enough to coat the back of a spoon, stirring occasionally so it doesn’t stick.

Remove pan from heat and when the sauce cools to room temperature, transfer to a sealed plastic container and refrigerate until ready to use. This sauce will keep 10 days in a well-sealed container in the refrigerator. 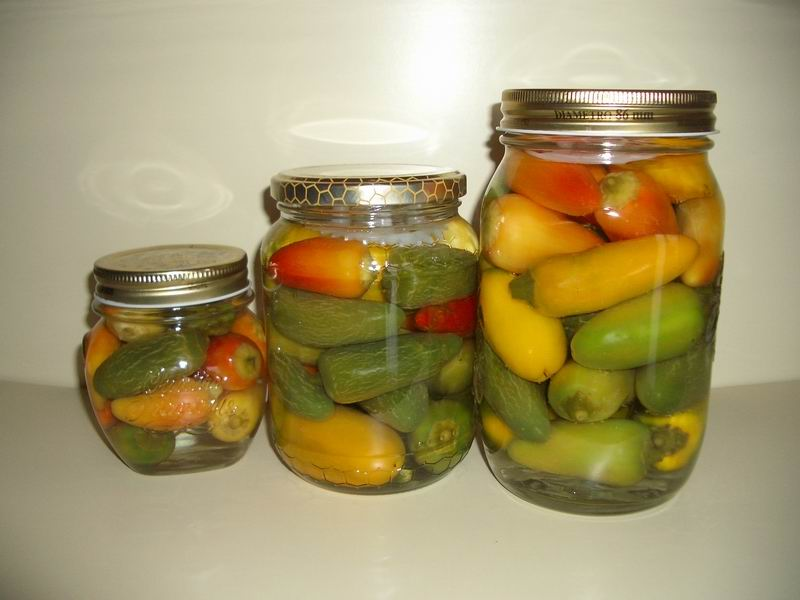 Pickled hot peppers are extremely versatile. They can be a great snack, with some cheese and they’re a wonderful addition to a mixed antipasto. They also are excellent at spicing up bland foods, especially boiled meats. It’s easy to pickle hot peppers at home and, if you do, you can make them just the way you want, with none of the additions commercial producers make. You can also use them in the chicken recipe below.

Makes several jars: To judge how many jars I will need, I arrage the peppers in jars until all the peppers are used. I then wash and sterilize the jars.

All peppers, and especially hot peppers, have oils that are extremely irritating and don’t wash off easily, so it is best to wear gloves. If you don’t use gloves, rubbing an eye, even hours later, could be excruciating.

Wash the peppers and pat them dry. Remove any that look blemished. Next, puncture the skins of the peppers with the tines of a fork to allow the vineagr to penetrate.

Pack the jars with the peppers, adding a sprinkling of salt between layers.

Pour the vinegar into a saucepan and bring it to a brief boil (2-3 minutes). Use it to fill the jars, tapping them and gently shaking them to dislodge air bubbles.

Put the lids on the jars and put them on a rack in a sterilizer (or a large pot) with cold water to cover. Bring the pot to a boil and simmer the peppers for 20 minutes to sterilize them.

Let the pot cool and when you can safely dip a hand into the water remove the jars. Check the seals of the lids and put the jars in a cool dark place. They’ll be ready in a couple of weeks and will keep for a year.

You can add a half pound of Italian sausage to this dish when browning the chicken.

Season chicken with salt and pepper and saute in a skillet with 1 tablespoon olive oil for 5 minutes per side. Remove and set aside.

Add garlic and onion and saute another 5 minutes. Put chicken back in skillet and add broth, lemon juice, tomato paste, herbs and peppers.

Simmer for another 10-15 minutes or until sauce has reduced a bit and chicken is fully cooked.

Broccoli with Garlic and Hot Pepper 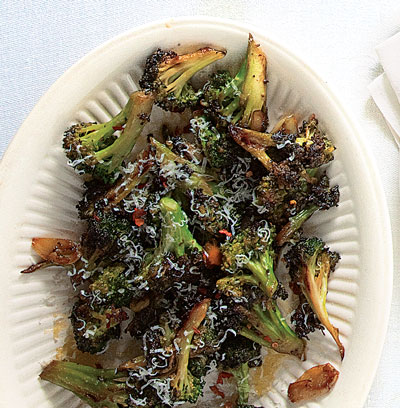 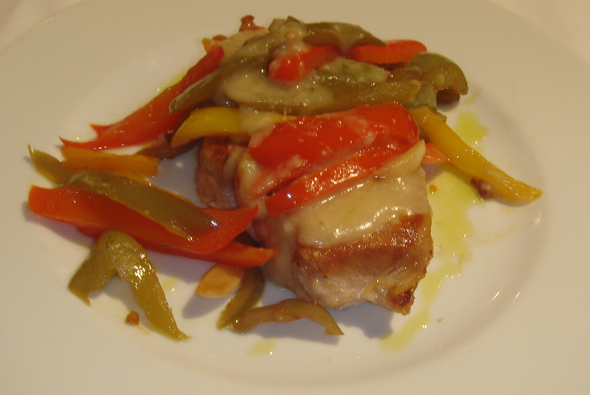 Season chops with salt and pepper.

Heat 2 tablespoons of olive oil In a medium skillet.

Cook pork chops 5 minutes on each side. Transfer to a platter and cover with foil.

In the same pan add the garlic and saute for i minute, then add the bell peppers. After 6 minutes add the chopped hot peppers.

Add 3 tablespoons of the vinegar brine mixture from the peppers and continue to heat the peppers.

Return the pork chops to the skillet and cover cook for about 6 minutes. Serve pork chops with the peppers on top. 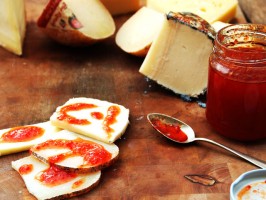 Italians like to serve this jam with cheese as an appetizer.

In a large saucepan combine the chili peppers, bell peppers and apple cider vinegar. Cover the pot with a lid and cook for about 20 minutes or until the peppers have softened. In a colander, drain the pepper mixture and with the back of a wooden spoon, press on the peppers to extract any excess liquid.

Transfer the peppers to a food mill or a blender and puree. Press the puree through a sieve to remove the pepper skin. Discard the skin.

In a saucepan over medium heat, add the pepper puree. Add the sugar, a little at a time, and mix until the sugar dissolves. Continue to cook the mixture for about 40 minutes, stirring occasionally. Remove from the heat when the mixture resembles a jam texture.

Quickly ladle jam into sterile jars, filling to within 1/4 inch of the tops. Cover with flat lids and screw on bands tightly.

Place jars on a rack and slowly lower jars into a canner. The water should cover the jars completely and should be hot but not boiling. Bring water to a boil and process for 5 minutes.

Or, you can seal the jars tightly, cool overnight in the refrigerator and freeze any that you will not be using immediately.