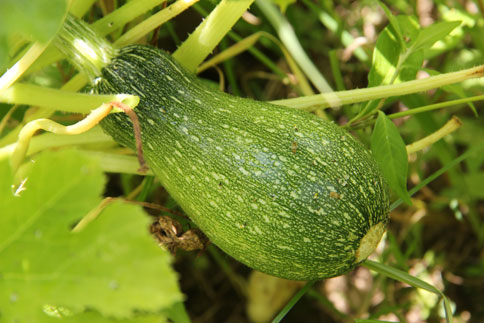 The exact history of quick bread is not known, but most quick breads were not developed until the 18th century, after the discovery of the first leavening agent, ‘pearlash’. The first published recipe to call for pearlash — a type of gingerbread — was published in 1796 by Amelia Simmons. It was the beginning of a chemical leavening revolution that would spread around the world.

The early colonists had hardwood forests as a resource. Aside from being a logical building material and fuel, hardwoods provided another important resource, ashes. Ashes were a major export two hundred years ago, both to Canada and Britain. They were valuable for sweetening gardens and for providing lye for making soap. They were also a source of potash and its derivative, pearlash, which proved to be a leavening agent.

To make pearlash, you first have to make potash and to make potash, you first have to make lye. To make lye, you pass water through a barrel of hardwood ashes over and over. To make potash, you evaporate the lye water until you have a solid. Pearlash is a purified version of potash. It is an alkaline compound and when paired with an acidic ingredient, such as sour milk, buttermilk or molasses, will produce carbon dioxide bubbles, the very same thing that yeast produces. Pearlash was used primarily in the seventeenth and eighteenth centuries, but because of its bitter aftertaste, it not did not replace yeast and was eventually replaced by saleratus (baking soda).

Baking soda comes from several sources, but the bulk of it is derived from an ore called “trona” which is mined in the Green River Basin in Wyoming. (Technology is being developed now to produce baking soda from sea water.)

When baking soda is heated, it slowly breaks down into sodium carbonate, water and carbon dioxide. When mixed with something acidic and wet, it starts producing carbon dioxide right away without waiting to be heated.

The next step after developing baking soda (which only worked when there was something acidic in a batter) was to create a “combination” powder which just needed to get wet to become active. To do this, baking soda was combined with a powdered acid, along with a little cornstarch, to keep the two dry and inactive. Scientists next added a second powder, cream of tartar, (a fruit acid that accumulates on the inside of wine casks as a wine matures) to the combination.  When baking soda and cream of tartar are moistened in a batter or dough, they begin to react to each other right away producing carbon dioxide bubbles.

This combination powder is still a very effective leavening agent, although it has a couple of drawbacks. It is “single acting, meaning that when it’s mixed into a batter or dough, it starts and finishes its reaction then and there. When you bake with it, you must get whatever you’re making into a preheated oven as quickly as possible before the bubbles begin to disappear. The second drawback is, that no matter how dry these combination powders are kept, they lose their potency after a short time.

Double acting baking powder is single acting baking powder taken one step further. The baking soda is still there, but the cream of tartar has been replaced by two acids, one like cream of tartar that reacts to the baking soda as soon as it’s wet and the other agent that doesn’t begin to react until it’s heated. This means you can be more leisurely about getting a dough or batter into the oven.

Like single acting baking powder, double acting baking powder contains a little cornstarch to prevent the baking soda and acids from reacting. However, it too will lose its leavening ability after about six months. Baking powder should be stored at room temperature in a dry place. A cabinet or pantry away from the sink or heat source is a perfect place. Do not store baking powder in the refrigerator, as it may shorten the shelf life due to condensation that occurs on the can.

Make Your Own Baking Powder

When baking powder was fairly new, bakers felt that it was going to replace yeast for all bread baking. It produced the same gas that yeast did (carbon dioxide) and its action was indeed “quick” compared to that of yeast. It has, in fact, replaced yeast as a leavening agent for cakes almost entirely, but not in bread dough. Quick breads cover a wide range of baked goods from biscuits and scones that are made from a dough,to muffins and loaves that are made from a batter. They can be large or small, savory or sweet. The major thing that identifies them is the fact that they are, as their name implies, quick to make.

Quick breads can be made from many kinds of ingredients. Banana bread and pumpkin bread are popular, but for the gardener with too much zucchini, a good zucchini bread recipe is a great way to use up some of that surplus squash. Zucchini, a green striped squash with a sweet flavor, is excellent to use in a quick bread. Modern squash, like zucchini, are descendants of plants that were first cultivated around 10,000 years ago, in what is today Mexico and Guatemala. Evidence suggests these ancient squash were originally grown for their seeds before eventually being bred as a vegetable. Shortly after Europeans arrived in the Americas, they began bringing squash back to Europe. The Italians are credited with breeding today’s modern zucchini from the original American squash.

How to keep your Zucchini Bread healthy: 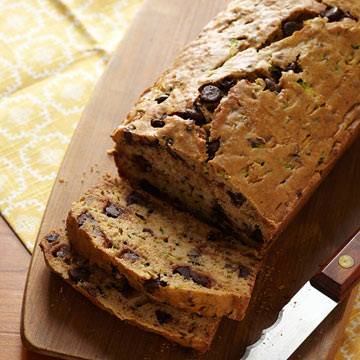 Preheat oven to 350 degrees F. Grease bottom and 1/2 inch up the sides of two 8x4x2-inch loaf pans. Set aside.

Divide mixture evenly between the two prepared pans. Bake about 55 minutes or until a toothpick inserted near centers comes out clean. Cool in pans on a wire rack 10 minutes. Remove bread from pans and cool completely on wire racks. For easier slicing, wrap and store overnight before serving. Makes 2 loaves (24 servings). 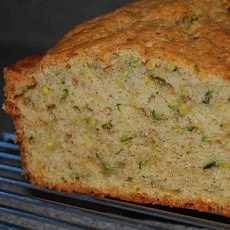 Whisk together the dry ingredients in a separate bowl and sprinkle over the wet ingredients. Mix thoroughly.

Bake for 50 minutes or until a toothpick inserted in the center of the loaf comes out clean.

Cool for 10 minutes before removing from the pan. Place the bread on a cooling rack and allow to cool completely before serving. 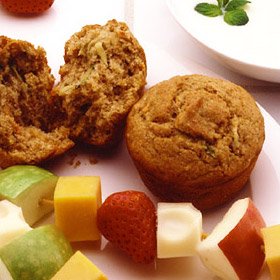 Mix eggs, oil and sugar in a medium-size bowl. Whisk for 30 seconds to dissolve sugar. Stir in shredded zucchini and carrot.

Bake for 23 to 25 minutes or until lightly browned. Remove from pan to wire racks to cool.

Combine the zucchini and salt in a large bowl. Let stand 30 minutes. Place zucchini in a strainer and press firmly with a rubber spatula to force out water.

Combine zucchini, 1/2 cup red onion, the Parmesan cheese, flour, egg, 1 tablespoon olive oil, garlic powder and pepper in a large bowl. If the batter is not thick enough to hold together, add a little more flour, one tablespoon at a time, until the mixture is the right consistency.

Keep pancakes warm in a 300 degree F oven while cooking the remaining pancakes. If desired, top pancakes with sour cream . 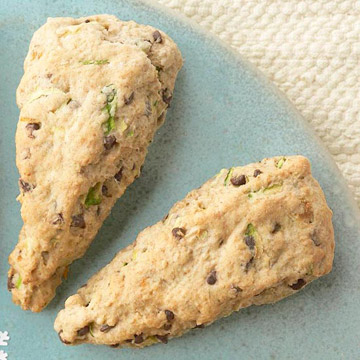 In a small bowl, combine egg and buttermilk; stir in zucchini and chocolate pieces or pecans. Add the buttermilk mixture all at once to the flour mixture. Using a fork, stir just until moistened.

Turn dough out onto a lightly floured surface. Knead dough by folding and gently pressing it for 10 to 12 strokes or until nearly smooth. Pat or lightly roll dough into an 8-inch circle. Cut dough circle into 12 wedges.

Place dough wedges, 2 inches apart, on ungreased baking sheets. Bake for 13 to 15 minutes or until edges are light brown. Remove scones from the baking pans and cool on a wire rack. Serve warm. Makes 12 scones. Scones freeze and reheat well. 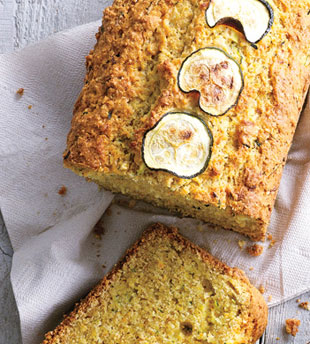 Melt the butter in a small saucepan over medium-high heat or in the microwave. Set aside and let cool. Whisk in (applesauce if using) eggs and buttermilk.

Trim zucchini ends. Thinly slice five 1/8″ rounds from 1 end of the zucchini and reserve for garnish. Coarsely grate remaining zucchini. Add to the bowl with the butter mixture and stir until well blended.

Sift both flours, sugar, baking powder, salt and baking soda into a large bowl. Whisk in cornmeal. Add zucchini mixture; fold just to blend (mixture will be very thick). Transfer batter to prepared pan and smooth top. Place reserved zucchini slices on top of the batter down the center in a single layer.

Bake bread until golden and a tester inserted into the center comes out clean, 55-65 minutes. Let cool in pan 10 minutes. Remove from pan; let cool completely on a wire rack. Store airtight at room temperature. 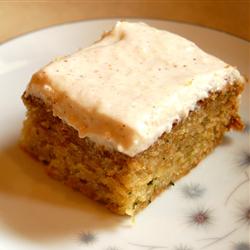 Combine egg whites, applesauce, sugar, grated zucchini and vanilla in the bowl of an electric mixer. Beat until well mixed.

Combine the flour, baking soda, salt, baking powder and cinnamon in a large measuring cup and add to the egg mixture. Mix on low speed until just combined. Fold in the walnuts with a spatula.

To make the frosting:

Beat cream cheese, confectioners’ sugar and vanilla in the bowl with an electric mixer on medium speed until smooth. Spread on the top of the cake. Chill before serving.

Valuing quiet and solitude in academe.

The Cooking, The Wedding Planning, The Life, The All.