The Jewish presence in Italy dates to the pre‑Christian Roman period (more than two thousand years ago) and continues to this day. There are approximately 28,400 Jews in Italy today. They are concentrated in Rome (13,000) and Milan (8,000), with smaller communities situated in Turin (900), Florence (1,000), Venice (600) and Livorno (600). Other Jewish communities numbering a few hundred members can be found in several other cities. The community’s umbrella organization, the Unione delle Comunita Ebraiche Italiane (Union of Italian Jewish Communities), provides religious, cultural and educational services to Italy’s Jewish population and also represents the community on the national-political level. 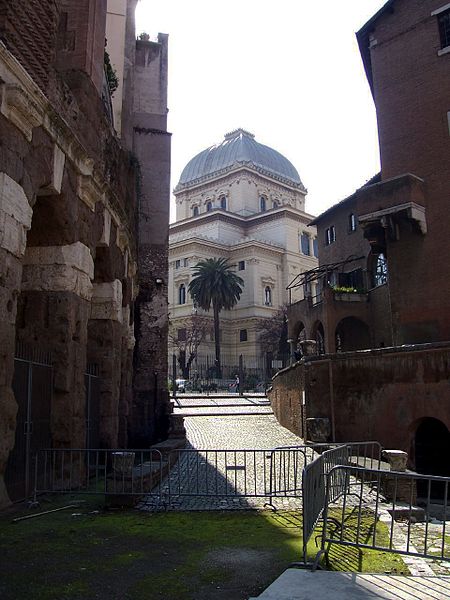 The Great Synagogue of Rome.

When the edict of expulsion was issued in 1492, many Jews from Spain and Sicily (which, along with Naples and points south, were under Spanish control at the time) fled north, traveling up the Italian peninsula. The refugees brought their favored foods and flavorings to their new communities, among them marzipan, eggplant, artichokes, a taste for sweet-and-sour and the raisin and pine nut garnish used with meats and vegetables, as well as fish. Caponata, now used throughout Italy, was another Sicilian-Jewish dish. A sweet-savory cold salad of fried eggplant, onions, garlic, olives and capers (and tomatoes—a later addition from the Americas). It is still labeled alla giudea, Jewish-style, on some menus.

Italian Jews have always been exceptionally fond of vegetables and developed countless ways to use them. Spinach is a particular favorite: even the stems might be slowly braised for a side dish or the leaves combined with almonds in a dessert. Pumpkin and other golden squashes—introduced from the New World by Spanish and Portuguese Jews—are often included on the Yom Kippur break-the-fast menu, either pureed with onion and a touch of crystallized citron (etrog) or flavored with Parmesan and raisins as a filling for pasta.

Much of Italian-Jewish cooking is “cucina povera”, cuisine of the poor and vegetables were often used to stretch—or even replace—meat and fish. Sometimes, as in polpettine di pollocoi sedani (chicken meatballs with celery) a Roman Rosh Hashanah specialty, the vegetables are cooked alongside the meat. In other recipes, olives, potatoes, cooked spinach or other vegetables are mixed into ground meat, creating meatballs and loaves that not only make the meat go further, but are more tender and flavorful.

Rosh Hashanah is the Jewish New Year. The themes of this solemn holiday are self-reflection and repentance. There are ten days between Rosh Hashanah and Yom Kippur in which Jewish people are charged with taking a reflective look at the past year, repenting for misdeeds, asking for forgiveness and working on ways to become better people.

The home ceremony takes place at sundown and the main event of this special day is a festive seder meal. There are three categories of symbolic foods for Rosh Hashanah and each has its own meaning. The first is sweet tasting foods, such as apples and honey, which represent the desire for a sweet year to come. The second which includes pomegranates and fish, represent one’s wish to be fruitful and multiply. The third category which includes foods such as carrots, beets, leeks and cabbage, represent the destruction and eradication of one’s sins and one’s enemies.

Giuliana Ascoli Vitali-Norsa, author of La Cucina nella Tradizione Ebraica, says that, “among other things, the standard Italian Rosh Hashanah meal will include ricciolini, triglie alla mosaica, polpettone di tacchino, fried yellow squash or other vegetables prepared without vinegar and either a honey cake, sfratti or apples and bananas cooked with rum. Ricciolini are pasta served in broth, a sort of noodle soup, while triglie alla mosaica are reef mullet cooked in a tomato sauce, sometimes with a jolt of hot pepper; you also find them referred to as triglie alla livornese and by extension other kinds of fish cooked in this sauce can be called “alla livornese” too. Polpettone di tacchino is turkey loaf and it can be simple or extraordinary.”

I have put together a menu for an Italian Rosh Hashanah dinner for you to try with the help of some famous Jewish chefs.

This photo from Rotonda Restaurant in Rome is courtesy of TripAdvisor

A very old recipe, these artichokes became famous in the Jewish community in Rome.

Trim the tops off the artichokes, working around the globe to retain the shape. Halve the lemons, juice them and cover with cold water. Soak the artichokes in this lemon water until ready to use, then drain and dry.

Hold the artichokes by the stems and bang them a little against the countertop to open the leaves.

Combine 1/2 cup of the olive oil, the parsley, basil, salt, pepper and garlic and sprinkle the mixture between the leaves. Roll each artichoke in matzo meal or flour.

Heat a large pot, wok, or Dutch oven with a cover, filled with about 3 inches of oil, to sizzling. Deep-fry 2–3 artichokes at a time for about 10 minutes, turning occasionally with a tongs; they will puff up as they cook. Serve hot, sprinkled with additional sea salt. 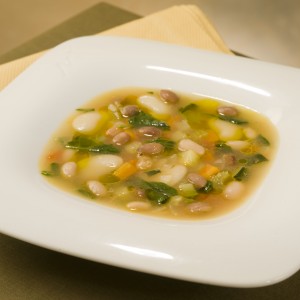 Joy of Kosher by Jamie Geller

In a large stock pot over low heat, combine the olive oil and onions. Sweat the onions until wilted and soft, about 10 minutes. Add carrots and cook 3 minutes. Add celery, beans, water and Parmigiano rind and cook for about 20 minutes.

Add diced potatoes and zucchini and cook for another 20 minutes.  Add tomatoes and their juices, cover, and cook at a low simmer for at least 30 more minutes. Add spinach, season with kosher salt and black pepper, and cook 2-3 minutes longer.  Serve with a drizzle of extra virgin olive oil and grated Parmigiano-Reggiano cheese, if using. 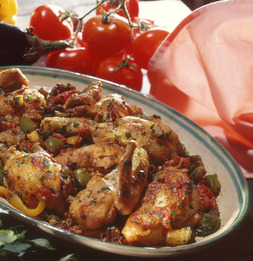 Alessandra Rovati was born and raised in Venice, Italy and she writes and teaches about Kosher and Jewish Italian food.

Several Jewish Italian recipes for poultry have Biblical names. Here is one of the most popular examples, which appears in different variations in most cooking books on the topic, from Vitali Norsa, to Servi-Machlin to Joyce Goldstein. It’s not a surprise, because chicken cooked with this technique stays moist and juicy. It’s a variation on the basic “pollo in umido”, which Americans call “chicken cacciatore”.

Rinse the chicken and pat dry. Heat the olive oil, add the chicken and saute until golden. Add the salt, pepper, olives, garlic, herbs and the chopped (and drained) tomatoes.

Cook for 2 minutes, stirring, then lower the flame and cook covered until tender (about 30 minutes), stirring occasionally. Now uncover, add the wine and allow it to evaporate it on high heat.

This dish can be made ahead and reheated just before serving. 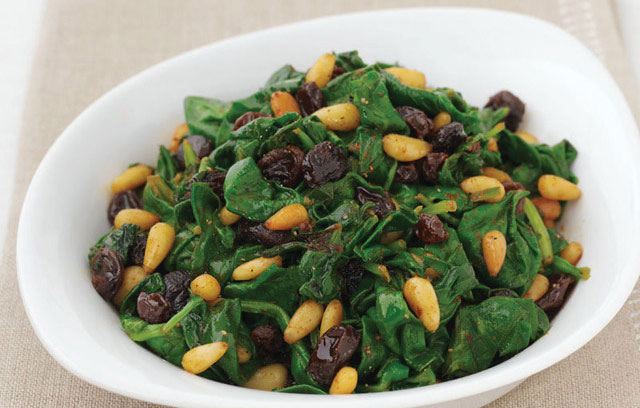 Spinach With Pine Nuts and Raisins

“So, how did kosher find its way to the land of pasta and polenta? ‘Through persecutions and emigrations,’ Goldstein says. ‘The Jews carried their culinary traditions with them and shared them with the world.’ They brought ingredients like tomatoes and squash and peppers to Italy, as well as styles of cooking — preparing room temperature dishes, for example, was their way around cooking on the Sabbath. In Italy these traditions were embraced and absorbed completely; something Goldstein is proud of. ‘Perhaps his is the positive side of the ‘Wandering Jew,’ ” she considers. ‘Food is a strong cultural continuum, and it’s nice to be able to rediscover some of these dishes as Jewish.'”

Rinse the spinach well and remove the stems. Place in a large sauté pan with only the rinsing water clinging to the leaves. Cook over medium heat, turning as needed until wilted, just a few minutes. Drain well and set aside.

Add the olive oil to the now-empty pan and place over medium heat. Add the onions and sauté until tender, about 8 minutes. Add the spinach, raisins and pine nuts and sauté briefly to warm through. Season with salt and pepper and serve warm or at room temperature. 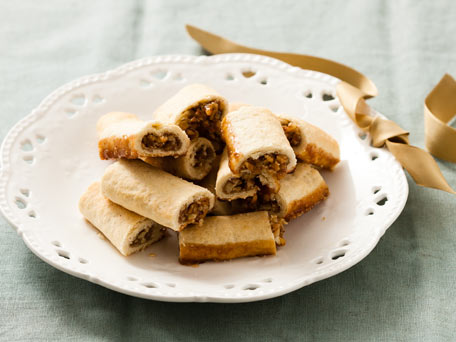 The Italian police, as the legend goes, used sticks to forcibly evict the Jews from their homes. Sfratti, the Italian word for stick, was a pastry the Jews of that region created to resemble those sticks. These honey and nut pastries (a cross between rugelach and biscotti) are baked as sticks and then sliced into cookies. The honey-laden pastry is traditionally served for dessert on Rosh Hashanah.

In a large mixing bowl, add the flour and make a well in the center. Place the sugar and salt in the well. Add the wine and oil gradually while mixing with a fork until you form a smooth dough. Empty the dough onto a floured cutting board and knead for 5 minutes. Return the dough to a bowl, cover with plastic wrap, and set aside in the refrigerator.

To make the filling, bring the honey to a rapid boil in large saute pan over high heat and cook for 2 minutes without stirring. Add the spices, orange zest and nuts and cook for an additional 5 minutes, stirring constantly. Remove the pan from the heat and continue to stir until the mixture is cool enough to handle. Divide into 6 equal portions. On a floured cutting board, roll each portion into a thin log, about a foot long, and set aside.

Remove the dough from the refrigerator and divide it into 6 equal portions. Using a rolling pin, roll one piece of dough to form a 4 x 14 strip. Place one honey/nut log at the edge of the dough and fold the sides over the ends of the log. Then wrap the dough around the filling, covering it completely. Place on a sheet pan, seam-side down.

Bake in a preheated 375°F oven for 20 minutes. Allow the sfratti to rest only for 5 minutes before removing from the sheet pan, then immediately wrap in foil. Once completely cool, cut on bias into 1-inch slices, just before serving.

Sfratti keep for several weeks without refrigeration when wrapped in foil. In fact, they taste better after they have been allowed to age for a few days.

I wish you all l’shana tova (a good year) filled with many years of life and happiness.