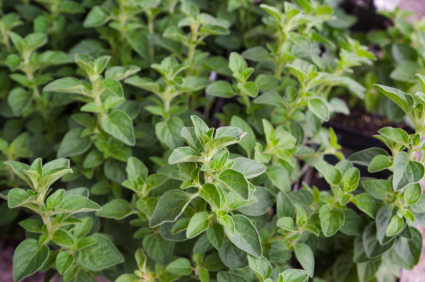 Oregano (Origano in Italian) is probably the herb most commonly associated with Italy in the United States, however, it is not the mostly commonly used herb in Italian cuisine (that distinction would probably go to parsley or basil). With its pungent flavor, oregano gained great popularity in the United States after WW II, when returning G.I.’s longed for the flavor of the pizza they had eaten in Italy. Additionally, the large American-Sicilian community in the United States contributed to making this herb very popular, but it would be quite unusual to see it in the regional cuisine of central and northern Italy. 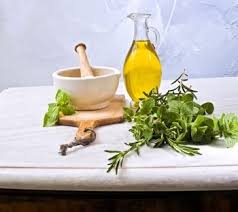 Native to the Mediterranean, oregano is very closely related to marjoram. Oregano (like basil, sage, mint, rosemary, thyme and marjoram) belongs to the Lamiaceae (mint) family. The intensity of oregano varies tremendously, depending on a number of factors: the variety or genus, the soil, the climate and the season all have a great influence on the content of its essential oils – phenols carvacrol and thymol – which are what determine its flavor and intensity. Oregano sometimes can be so strong, it can actually numb your tongue. But other varieties grown in colder climates often have minimum aroma and flavor. The most commonly used variety in Italy is the “Sicilian Oregano” – spicy, sweet and fragrant, this variety is a hybrid made from sweet marjoram or wild marjoram and origanum onite. As with thyme and bay leaves, this herb is usually more flavorful in dried form than fresh.

Cut the small leaves from the woody stems with scissors, if you are using fresh oregano. Wash the leaves thoroughly before using them and blot dry with a paper towel.

Wrap uncut stems in a damp paper towel, place inside a plastic bag and refrigerate for up to 5 days. Store dried oregano in an airtight container away from light and heat for up to 2 years. Faded color or dimished aroma or taste usually indicates that the herb is old and should be replaced.

Before adding the herb to your dish, take the leaves in your hands and roll them between your palms to crush them and release the natural oils. The flowers of the oregano plant can also be eaten in salads. They are purple or pink. They impart a slightly spicy flavor.

If you are creating a “bouquet garni,” wash the oregano with the leaves on the stems. Tie the oregano to thyme, basil, parsley, rosemary, tarragon and/or bay leaves with a string. Drop it in a stock mixture and allow it to simmer until all the flavors are imparted into the mixture.

Oregano is a key ingredient in pizza and numerous Sicilian and southern Italian preparations for pasta – such as Bucatini con sarde e melanzane (Bucatini pasta with sardines and eggplant) and Pasta al forno alla palermitana (baked pasta Palermo style), for vegetables, such as Patate con origano (potatoes with oregano) or Peperoni alla menta e origano (peppers with mint and oregano). Often used in Sicily and parts of southern Italy with grilled fish, oregano is also an important ingredient in Italian/American cuisine – most famously – in marinara sauces.

Some Recipes to Use Your Oregano 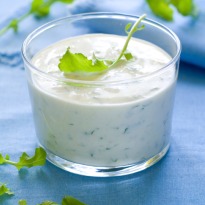 This would make a great sauce for lamb chops, falafel, hamburgers or a cracker/vegetable appetizer.

Mix all ingredients together. Cover and refrigerate to develop flavors, at least 2 hours and up to 6 hours.

Strained Yogurt: Set a large strainer over a 4-cup measuring cup. Line the strainer with a whitempaper towel. Add yogurt to strainer and cover with pastic wrap. Chill in the refrigerator until yogurt is thick (about 1 cup liquid will drain from yogurt), at least 2 hours or overnight. 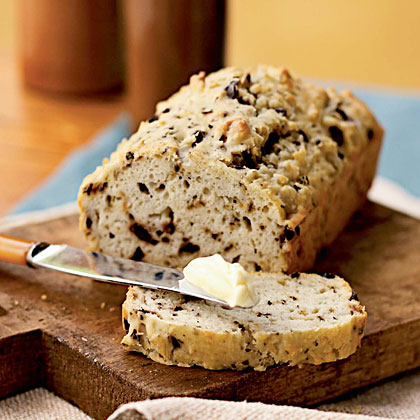 This bread goes very well with a bowl of soup.

Heat oil in a large nonstick skillet over medium-high heat. Add onion to pan; sauté 3 minutes or until onion is tender. Set aside.

Lightly spoon flour into dry measuring cups; level with a knife. Combine flour, baking soda and salt in a large bowl; make a well in the center of the mixture. Combine buttermilk, butter and egg whites, stirring with a whisk. Add buttermilk mixture to flour mixture, stirring just until moist. Fold in onion, olives and oregano.

Spread batter into an 8×4 inch loaf pan coated with cooking spray. Bake for 45 minutes or until a wooden pick inserted in center comes out clean. Cool 10 minutes in pan on a wire rack before removing from the pan.

Cool completely on a wire rack. 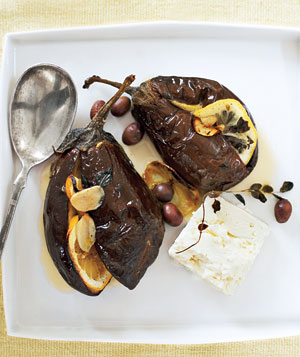 Heat oven to 450°F. Slice each eggplant in half lengthwise, cutting only about 3/4 of the way through so the eggplant halves remain attached at the top. Arrange the eggplants in a baking dish at least 2 inches deep, such as a 9-by-13-inch pan.

Thinly slice 1 lemon. Squeeze the juice from the remaining 2 lemons. Insert the lemon slices into the slit in each eggplant, then press some garlic and oregano into each slit. Season with the salt and pepper. Drizzle the eggplants with the lemon juice and oil. Cover with foil and roast, basting frequently with the juices in the dish, until the eggplants are very soft, about 40 minutes.

Remove foil and roast for 5 more minutes. Transfer to individual plates and top with the pan juices, olives and Feta. 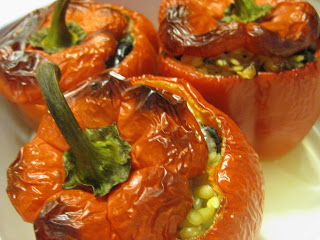 Cooking the peppers uncovered gives them a delicious, roasted flavor. Serve them with a little of the pan juices spooned over the top. A red pepper is practically ready-made for stuffing. Just trim away ribs and shake out seeds. Look for pretty peppers with relatively flat bottoms so they stay upright as they bake.

Heat the oven to 350°F. Heat 2 tablespoons of the oil in a large skillet until moderately hot. Add the red onion and cook over moderate heat, stirring occasionally until soft, about 5 minutes. Add the kale and cook, stirring often, until wilted and tender, 5 to 7 minutes. Season with a little salt and pepper and set aside.

In a medium bowl, combine the onion and kale with the cooked orzo, lemon zest, lemon juice, feta cheese, oregano, thyme, parsley and olives. Toss gently until combined and season with salt and pepper.

Slice off the top 1/2 inch of each pepper and reserve. With a paring knife, cut away the ribs and discard.

Turn the pepper upside down and pat it to get all the seeds to fall out. Divide the orzo filling among the peppers. Replace the top of each pepper.

Put the peppers in a medium baking dish and sprinkle them with the remaining 2 tablespoons olive oil and season with salt and pepper. Pour the wine in the pan. Bake until the peppers are very tender and slightly blackened on top, about 1-1/2 hours.

Grilled Shrimp with Lemon and Oregano

Snip through the shells of the shrimp along the middle of the back using kitchen shears, exposing the vein and but leaving the tail and adjoining segment of shell intact. Devein shrimp, leaving shells in place.

Mince and mash garlic to a paste with salt using a large heavy knife. Transfer to a blender along with lemon juice and pepper and blend until smooth. With motor running, add oil in a slow stream, blending until emulsified. Transfer dressing to a bowl and stir in chopped oregano.

Toss shrimp with 1/4 cup ot the dressing in a large bowl and marinate no more than 15 minutes. (Texture of shrimp will change if marinated too long.)

Lightly brush lemon wedges with some of remaining dressing and grill, turning over once, until grill marks appear, 3 to 5 minutes. Transfer to a large platter.

Grill shrimp on lightly oiled grill rack (covered only if using a gas grill), turning over once, until just cooked through, 6 to 7 minutes total. Transfer shrimp as soon as they turn pink to the platter with the lemons. 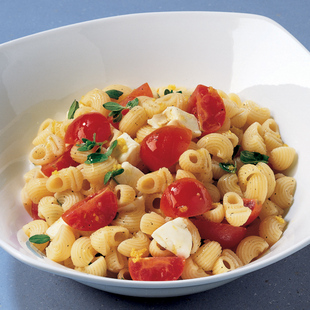 Finely grate the zest of 1 lemon into a large bowl. Add cheese, tomatoes and oregano; toss to combine.

Squeeze 4 tablespoons juice from the lemons into a small bowl and whisk together lemon juice, olive oil and a generous pinch of salt and pepper. Add pasta and lemon dressing to tomato mixture and mix well; adjust seasoning. Serve immediately.