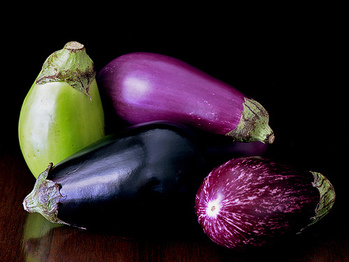 Eggplant is a vegetable long prized for its beauty, as well as its unique taste and texture. Eggplant belongs to the plant family commonly known as nightshades and are kin to the tomato, bell pepper and potato. Eggplant grows in a manner much like tomatoes by hanging from the vines of a plant that grows several feet in height.

One of the most popular varieties of eggplant in North America looks like a pear-shaped egg, a characteristic from which its name is derived. The skin is glossy and deep purple in color, while the flesh is cream-colored and spongy in consistency. Contained within the flesh are seeds arranged in a conical pattern.

In addition to this variety, eggplant is also available in a cornucopia of other colors including lavender, jade green, orange and yellow-white, as well as in sizes and shapes that range from that of a small tomato to a large zucchini.

While the different varieties do vary slightly in taste and texture, one can generally describe eggplant as having a pleasantly bitter taste and soft texture. In many recipes, eggplant fulfills the role of being a complementary ingredient that balances the surrounding flavors. Eggplant is low in fat, cholesterol and sodium and contains nutrients invaluable for good health.

Shahla Khan, a senior adjunct professor in the Department of Nutrition and Dietetics at the University of North Florida, discusses myths and facts about this fruit.

Myth: Eggplant is a vegetable.

Fact: While it’s generally thought of as a vegetable, eggplant is actually a fruit. The eggplant, aubergine, melongene, brinjal or guinea squash is a plant of the family Solanaceae. Eggplant is grown for its usually egg-shaped fleshy fruit and is eaten as a cooked vegetable. Some even consider it a berry.

Myth: Consuming eggplant causes insanity and can be poisonous.

Fact: Because eggplant is a member of the nightshade family, people thought the purple bulb variety was associated with the mandrake plant and was poisonous and, if you ate it, you would go insane. Some people also thought nightshade vegetables were harmful because they confused them with “deadly nightshade,” an inedible weed that’s also part of the Solanaceae family. Historically, deadly nightshade has been associated with witchcraft. When ingested in large amounts, it’s believed to cause convulsions or even death. But that has nothing to do with eggplant.

Myth: Eggplant always has to be salted before cooking to remove its bitter taste.

Fact: The raw fruit can have a somewhat bitter taste. Salting and then rinsing the sliced fruit may soften and remove some of the bitterness. Some varieties of eggplant do not need this treatment, because they are far less bitter. The fruit is capable of absorbing large amounts of cooking fats and the salting process may reduce the amount of oil absorbed.

Fact: The health benefits of this nightshade fruit far outweigh any risks. Eggplants contain many nutrients that are invaluable to health. Potassium, manganese, copper, vitamins B1, B3, B6, folate, magnesium and tryptophan, to mention just a few. In addition to those nutrients, eggplants are low in sodium, fat and cholesterol and one cup of cooked eggplant has about 30 calories. Eggplants also contain phytochemicals that enhance health.

Myth: When purchasing eggplant, the bigger the better.

Fact: Smaller, immature eggplants are best. Their seeds will be softer and they are less likely to be bitter. Eggplants are very perishable and get bitter with age. They should have firm, taut, smooth and shiny skins. Once the skin starts to wrinkle or you feel and see soft brown spots, the quality of the eggplant has lessened. Large, oversize eggplants may be tough, seedy and bitter.

Source: University of North Florida’s Department of Nutrition and Dietetics.

How to Select and Store

Choose eggplants that are firm and heavy for their size. Their skin should be smooth and shiny and their color, whether it be purple, white or green, should be vivid. They should be free of discoloration, scars and bruises, which usually indicate that the flesh beneath has become damaged and possibly decayed.

The stem and cap, on either end of the eggplant, should be bright green in color. As you would with other fruits and vegetables, avoid purchasing eggplant that has been waxed. To test for the ripeness of an eggplant, gently press the skin with the pad of your thumb. If it springs back, the eggplant is ripe, while if an indentation remains, it is not.

Although they look hardy, eggplants are actually very perishable and care should be taken in their storage. Eggplants are sensitive to both heat and cold and should ideally be stored at around 50 degrees Fahrenheit (10 degrees Celsius). Do not cut eggplant before you store it, as it perishes quickly once its skin has been punctured or its inner flesh exposed.

Place uncut and unwashed eggplant in a plastic bag and store in the refrigerator crisper where it will keep for a few days. If it is too large for the crisper, do not try to force it in; this will damage the skin and cause the eggplant to spoil and decay. Instead, place it on a shelf in the refrigerator.

If you purchase eggplant that is wrapped in plastic film, remove it as soon as possible, since it will inhibit the eggplant from breathing and degrade its freshness.

When cutting an eggplant, use a stainless steel knife as carbon steel will react with its nutrients and cause it to turn black. Wash the eggplant first and then cut off the ends.

Most eggplant can be eaten either with or without their skin. However, the larger ones and those that are white in color generally have tough skins that may not be palatable. To remove the skin, you can peel it before cutting or if you are baking it, you can scoop out the flesh once it is cooked.

To tenderize the flesh’s texture and reduce some of its naturally occurring bitter taste, you can sweat the eggplant by salting it. After cutting the eggplant into the desired size and shape, sprinkle it with salt and allow it to rest for about 30 minutes. This process will pull out some of its water content and make it less permeable to absorbing any oil used in cooking.

Rinsing the eggplant after “sweating” will remove most of the salt.

Eggplant can be baked, grilled, roasted in the oven or steamed. If baking it whole, pierce the eggplant several times with a fork to make small holes for the steam to escape. Bake at 350 degrees Fahrenheit (about 177 degrees Celsius) for 15 to 25 minutes, depending upon size. You can test it by gently inserting a knife or fork to see if it passes through easily. 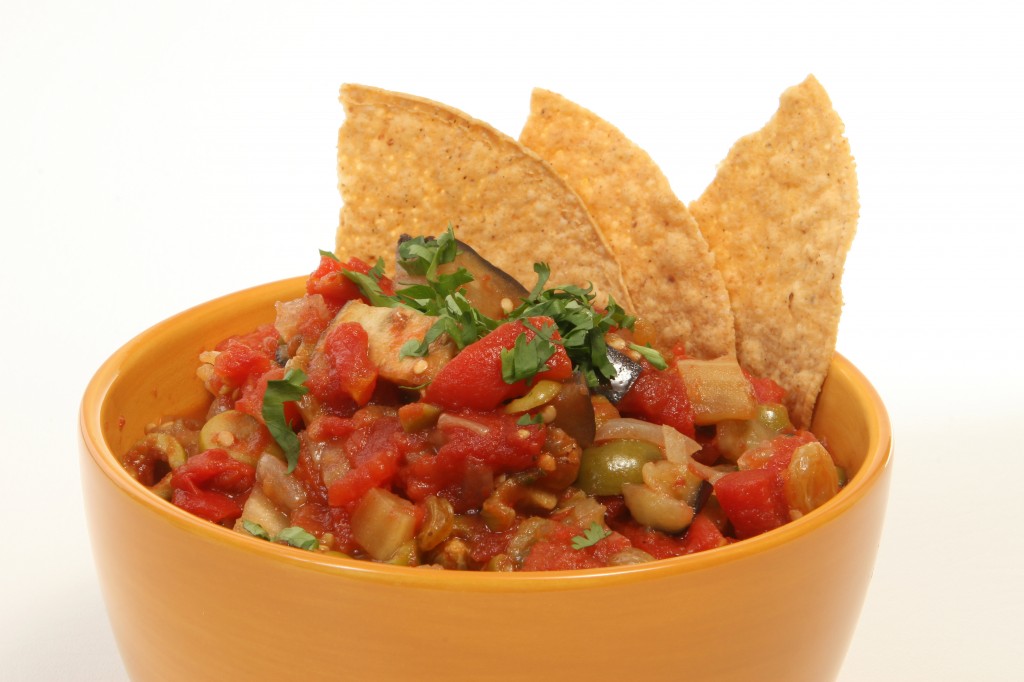 Add all remaining ingredients, except parsley. Simmer until picadillo thickens, stirring occasionally, about 8 minutes. Season to taste with salt and pepper and stir in parsley. Discard bay leaves. Serve with toasted pita or corn chips. 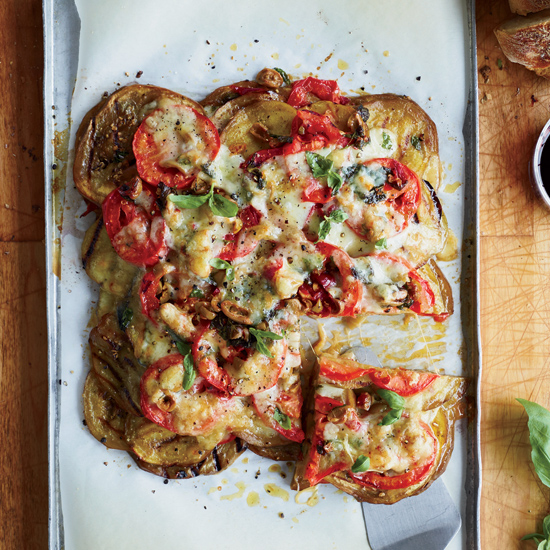 This grilled-vegetable version of Eggplant Parmesan is much lighter than the fried kind.

Brush the eggplant and tomato slices with olive oil and season lightly with salt.

Grill the eggplant in batches over moderately high heat, turning once, until softened and lightly charred, about 4 minutes.

Grill the tomatoes, turning once, until lightly charred but still intact, about 2 minutes. (This step can be done early in the day)

In a bowl, combine the olives, chilies and shredded basil.

Line a large rimmed baking sheet with parchment paper.  In the center, arrange half of the eggplant in a 9-inch square, overlapping the slices slightly. Top with half of the grilled tomatoes, olive mixture and cheese.

Repeat with the remaining ingredients, ending with the cheese.

Bake in the center of the oven for about 15 minutes, until bubbling and golden. Let stand for 10 minutes. Garnish with basil leaves and serve with crusty bread. 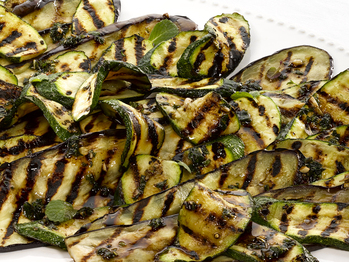 Serve at room temperature to allow the flavors to blend.

Sprinkle the eggplant slices with 2 teaspoons salt and let stand in a colander for 30 minutes.

Mix together the oil, vinegar and garlic. Season with salt and pepper to taste.

Brush the zucchini with a little of the olive oil and season with salt and pepper. Cook the zucchini, turning once, about 3 minutes, until tender. Transfer to a large bowl.

Rinse the eggplants and pat dry with paper towels. Brush the eggplants with olive oil and cook for about 5 minutes, turning once. Transfer to the bowl with the zucchini, add the dressing and mix.

Stir in the mint leaves. Let stand for at least 30 minutes before serving. 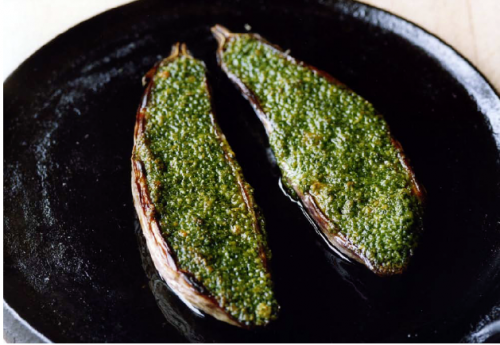 Preheat the oven to 425°F. Cut the eggplant lengthwise in half, through the stalk. Using a small, sharp knife make a crisscross pattern across the cut surfaces to a depth of about 3/4 inch.

Brush with a little of the olive oil and season with salt and pepper. Bake in the oven for 20 to 30 minutes. The flesh should be very soft.

Meanwhile, lightly toast the pine nuts in a dry skillet, then remove from the skillet and cool.

Process the basil, garlic, pine nuts and salt and pepper to taste into a paste in a food processor. Add enough of the remaining olive oil to produce a loose-textured puree.

Mix in the cheese and spread the pesto over the scored surfaces of the eggplant. Broil until golden and bubbling. Serve with a squeeze of lemon. 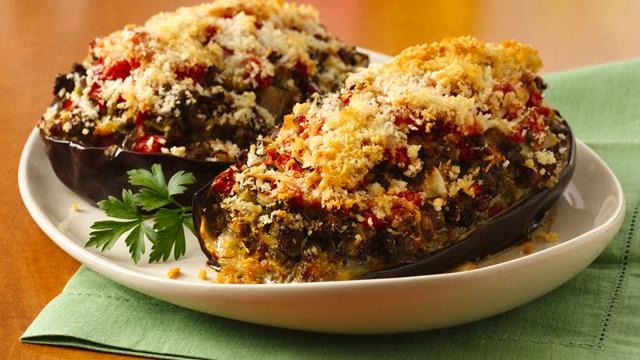 Cut the eggplant in half and scoop out the center, leaving enough flesh inside the skin, so that it holds its shape when baked.

Chop the eggplant that has been scooped out of the inside.

In a medium skillet, heat 1 tablespoon of the olive oil over low heat and saute the eggplant until very soft, 10 to 12 minutes. Remove to a mixing bowl.

Add the remaining 1 tablespoon olive oil to the skillet and saute the onion, pepper and garlic until tender. Add to the eggplant in the mixing bowl.

Salt and pepper the beef. Add the beef to the pan and saute until all of its liquid is evaporated and the beef begins to brown slightly. Add to the vegetables in the mixing bowl.

Mix together the cooked eggplant, vegetables, beef, herbs, 1 cup of the cheese, 1/4 cup of the bread crumbs, the egg and season with salt and pepper.

Fill the scooped-out eggplant halves with this mixture, dividing it evenly between the two halves.

Place in an oiled baking dish and bake for 50 minutes.

Let cool briefly; cut each half in two and serve.