A BBQ Sauce For Every Occasion

While not as common as ketchup, barbecue sauce has become a complex American condiment that is prepared differently across the country and heightens the flavor of meat. The ingredients typically include: ketchup, vinegar, sugar, garlic, onion and mustard. But, it’s the consistency and variations that create regional differences coast to coast.

No one is really sure where the term barbecue originated. The conventional wisdom is that the Spanish, upon landing in the Caribbean, used the word barbacoa to refer to the natives’ method of slow-cooking meat over a wooden platform. By the 19th century, the culinary technique was well established in the American South and, because pigs were prevalent in the region, pork became the primary meat at barbecues. Barbecue allowed an abundance of food to be cooked at once and quickly became the go-to menu item for large gatherings like church festivals and neighborhood picnics.

American Barbecue varies by region, with the four main styles named after their place of origin: Memphis, Tennessee; North Carolina; Kansas City and Texas. Memphis is renowned for pulled pork-shoulder doused in a sweet tomato-based sauce (eaten on its own or as a sandwich). North Carolina smokes the whole hog in a vinegar-based sauce. Kansas City natives prefer ribs cooked in a dry rub and Texans prefer beef, especially mesquite-grilled brisket.

If there’s one issue that divides barbecue fans more deeply than any other, it’s the kind of sauce that should be served on a particular type of meat. Though it inspires passionate argument, the colorful variety of regional sauces – peppery vinegar-based in eastern North Carolina, orange tomato-based in Kansas City or yellow mustard in South Carolina are actually a rather recent dilemma. Regional sauce variations originated in the early 20th century with the rise of barbecue restaurants. Before then, barbecue sauce was pretty much the same from state to state. It was generally not a condiment applied at the table, but rather used to baste the meat just before it was served.

From Virginia to Texas, 19th century accounts of barbecues are remarkably similar in their descriptions of the sauce. In 1882, a reporter from the Baltimore Sun visited a Virginia barbecue restaurant and noted male cooks mopping the meat with “a gravy of butter, salt, vinegar, and black pepper.” A guest at a San Antonio barbecue in 1883 recorded the sauce as, “Butter, with a mixture of pepper, salt, and vinegar.” In 1884, the Telegraph and Messenger of Macon, Georgia, described the sauce of well known barbecue cook, Berry Eubanks of Columbus, as, “made of homemade butter, seasoned with red bell pepper from the garden and apple vinegar.” Similar descriptions can be found of sauces in Kentucky and the Carolinas, too. Sweeteners, such as, brown sugar, molasses or honey, were notably absent from any 19th-century formulas. Based on these descriptions, one can conclude that the eastern North Carolina–style sauce – which consists of vinegar, salt, black and red peppers without a trace of sugar – is the closest to the original.

Growing up in an Italian American home in the Northeast US, barbecue sauces were not really a part of our cuisine. We rarely had food that was grilled. My father would grill sausage and steak a few times during the summer months. I recall that I did not really like the steak because it was tough and dry. My mother did baste meats and vegetables with olive oil, vinegar and herbs. She also made tomato sauces to pour over cooked meats. However, I did not really discover the world of barbecue until I was married and looking for something different to cook for dinner. American food magazines, of the time, were  my go to place for ideas and they were full of barbecue style recipes in the summertime. So I began to experiment. Try my Italian Babecue Sauce recipe below for a combination of what is good in American sauces and in Italian sauces.

Making homemade barbecue sauce is not difficult and it tastes so much better than bottled sauce. Here are a few to get you started. You just need to think about what you want to cook. 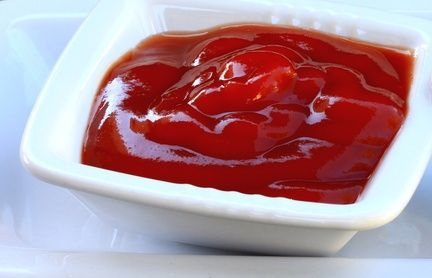 I like to make my own ketchup, so I can control the salt and sugar content. This recipe is easy to make and can be doubled or tripled. I freeze it in 1/2 cup measures, so I can add it to sauces without having to defrost a large container.

Combine the first four ingredients in a large saucepan.

Saute the onions, pepper and celery in olive oil in a skillet until they are transparent. Add the garlic and saute about one minute. Add the vegetables and spices to the tomato and vinegar mixture. Simmer together for at least an hour or until the mixture had achieved a ketchup consistency.

Use the food processor or an immersion blender to puree the tomato mixture until it is smooth. Ketchup made with a 28-ounce can of crushed tomatoes will fill three pint jars after the tomato mixture has cooked down. Refrigerate, freeze or use in BBQ sauces. 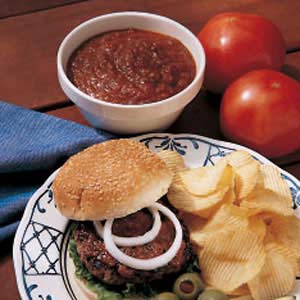 This is a delicious sauce to have on hand during the summer grilling season. Use it to baste chicken or to top hamburgers and hotdogs right off the grill.

Store in the refrigerator or freezer. 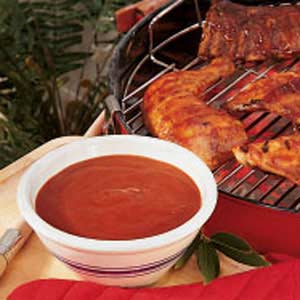 This is another basic sauce to keep on hand and adds a sweet mustard flavor to grilled meats.

Combine all of the ingredients in a small saucepan; bring to a boil, stirring occasionally. Reduce heat; cover and simmer for 30 minutes.

Discard the bay leaf. Use as a basting sauce when grilling chicken, pork or beef. 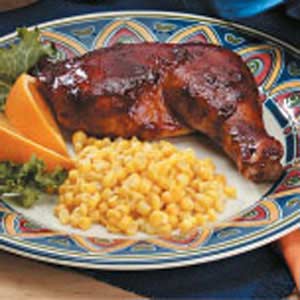 This sauce has a bold molasses flavor with a hint of orange. It goes well with chicken, ribs and chops.

In a large saucepan, combine all ingredients. Bring to a boil. Reduce heat; simmer, uncovered, for 20 minutes. Store in the refrigerator. 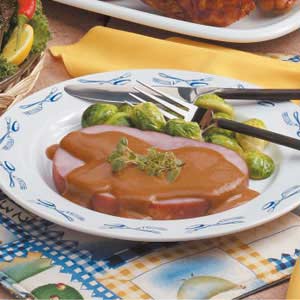 Use it on grilled ribs, fish or ham steak.

In a large saucepan, combine all ingredients. Bring to a boil. Reduce heat; simmer, uncovered, for 15-20 minutes or until the flavors are blended. Remove from the heat; cool. 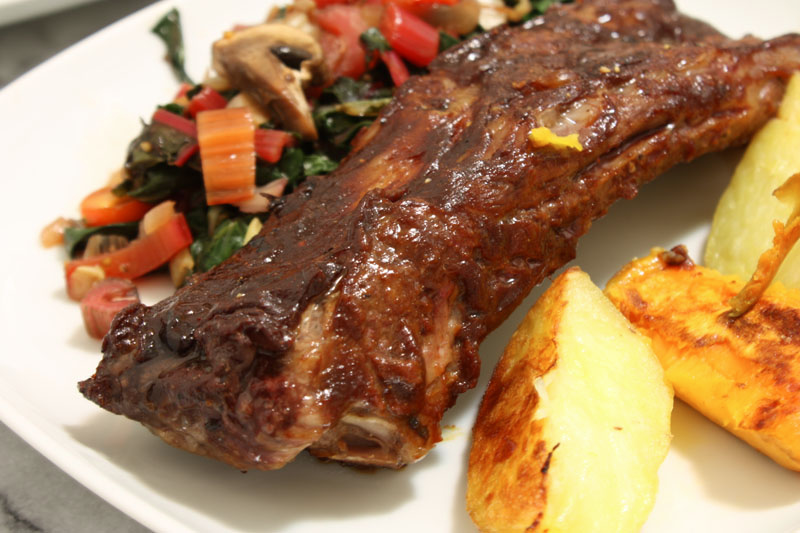 Especially good on a grilled beef

In a large saucepan, combine all ingredients. Bring to a boil over medium heat, stirring often. Reduce heat; simmer, uncovered, for 10-15 minutes or until heated through. 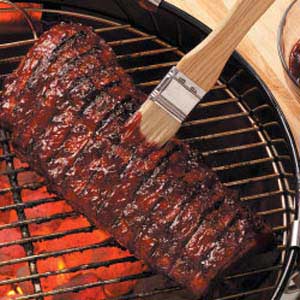 Use frozen cherries for convenience to make this barbecue sauce. It tastes great on ribs and chicken.

In a large saucepan, saute onion in butter until tender. Add garlic; cook 1 minute longer. Stir in the remaining ingredients. Cook, uncovered, over medium-low heat for 20 minutes or until cherries are tender and sauce is thickened, stirring occasionally. Puree with an immersion blender until almost smooth. 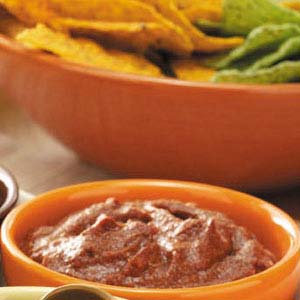 In a large saucepan, combine all ingredients. Bring to a boil. Reduce heat; simmer, uncovered, for 20 minutes or until thickened, stirring occasionally. 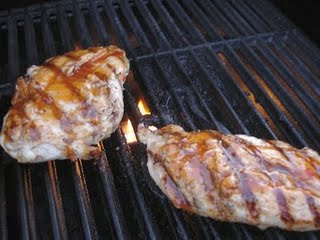 In a medium saucepan, heat the oil, 2 turns of the pan, over medium-high heat. Add the onion and garlic; cook until softened, about 5 minutes. Add the tomatoes and chicken stock and heat through, about 5 minutes. Stir in the vinegar, brown sugar, Worcestershire sauce and pepper. Lower the heat and simmer, stirring occasionally, until thickened. Puree with an immersion blender. 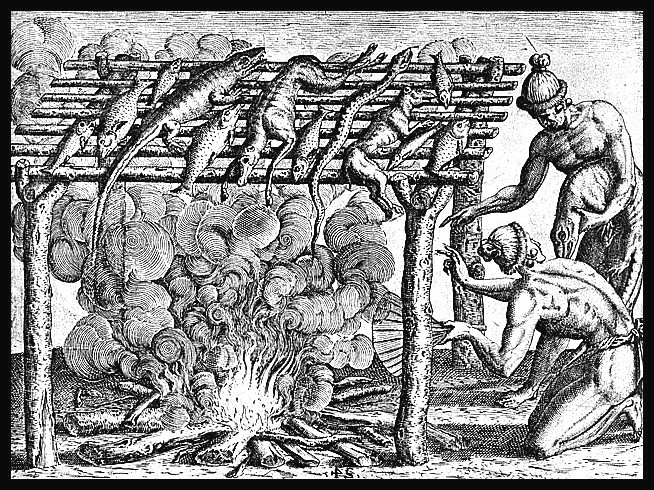