Cucumbers are generally believed to have originated in India and have been cultivated throughout western Asia for at least 3,000 years. From India, the cucumber spread to Greece and Italy and slightly later to China and southern Russia. Cucumbers probably were brought to the rest of Europe by the Romans and later to the New World via colonialism and trade networks. Their cultivation first appeared in France by the ninth century, Great Britain by the fourteenth century, the Caribbean at the end of the fifteenth century and North America by the middle of the sixteenth century.

Colonial encounters between Europeans and Native Americans resulted in the diffusion of cucumbers throughout North America. The Spanish began growing them in Hispaniola by 1494 and less than a century later European explorers were noting that a wide range of Native American peoples from Montreal to New York, Virginia and Florida were cultivating them, along with a large variety of other crops including maize, beans, squash, pumpkins, and gourds. By the seventeenth century, Native American groups on the Great Plains were also cultivating cucumbers. Cucumbers have a wide range of consumption uses cross-culturally. They are generally eaten fresh or pickled and are particularly important in the diets of people living in Russia and Asia, where they may also be served as a cooked vegetable. In India, the fruits are used in the preparation of chutney and curries. Cucumber seeds, young leaves and cooked stems are also consumed in some parts of Asia. In addition, since at least the nineteenth century, cucumbers have been used in the production of a large variety of cosmetics, including fragrances, body lotions, shampoos and soaps.

The skin, if it is not waxed, and the seeds of cucumbers are edible. As the cucumber matures, however, the seeds can start to become bitter, so look for narrow, young cucumbers at the market for the best taste. The English cucumber is a long and narrow cucumber with a tender, edible skin that is marketed as seedless but actually will contain a few seeds. Cucumbers are available year round with a peak season from May until August. Choose cucumbers with firm, smooth skins, devoid of any blemishes or soft spots. They can be stored in the refrigerator in a bag for about a week. Cucumbers are high in potassium and fiber with moderate amounts of Vitamins A and C, as well as folic acid, phosphorous and magnesium.

Although they can be cooked, cucumbers are most often eaten raw in salads, in cold soups, in cucumber based sauces and as hors d’oeuvres. Cucumbers are also the vegetable of choice for pickles. Cucumbers are used to make raita, (pronounced rye-ta), a classic Indian dish. Raita is a mixture of yogurt, cucumbers, seasonings and herbs. It can be used as a condiment or mixed with larger chunks of other vegetables or fruits for a salad. Similar to raita is the Greek cucumber and yogurt sauce, tzatziki. Tzatziki is the classic sauce used on Greek gyros, a sandwich of ground lamb on pita bread with onions and peppers.

English cucumbers (a.k.a. hot house cucumbers) are long and thin with a dark green skin. They are often sold wrapped in plastic at supermarkets, but you can find unwrapped ones at farmers markets. This cucumber has a mild, almost non-existent flavor and is prized for its thin skin and minimal seeds. English cucumbers are best sliced and served raw and are not good for pickling.

These are the most common cucumbers in North America. They are relatively smooth skinned and dark green. Cucumbers sold at grocery stores tend to be waxed to help them retain moisture, which is part of why these cucumbers tend to need peeling. Un-waxed varieties can be found (particularly at farmers markets), but you may still want to peel them if the skin is thick or bitter.

Kirby cucumbers are short and bumpy. They have a range of skin color from yellow to dark green. Kirbys are crunchy, flavorful and perfect for pickling.

Yellow, round and the size of a generous fist, lemon cucumbers do look like lemons. They are sweet, without that bitter edge that many cucumbers have, thin skins, minimal soft seeds and flavorful. They are tasty raw, but make delicious pickles too.

Persian cucumbers are very similar to English cucumbers. They are shorter, with bumpy skin, but have a mild flavor and thin skin.

Most Asian cucumbers are very narrow and long, growing up to 18 inches long , but remaining less than 2 inches in diameter. The seed cavity is vey small and the flesh is thick, crisp and flavorful. These cucumbers are picked when immature and used for pickling and salads. 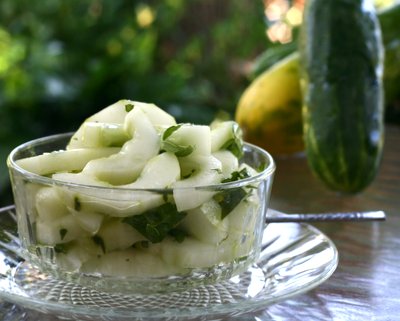 Trim and peel the cucumbers. Cut in half lengthwise and then scoop out and discard the seeds. Cut into half rings or chunks.

Drain the cucumbers. Stir in the remaining ingredients. Chill.

Place the cucumber in a bowl and toss with the salt, sugar and vinegar.

Let stand for about 5 minutes, then mix in the sour cream.

Fold in the dill. May be made a few hours in advance and refrigerated. 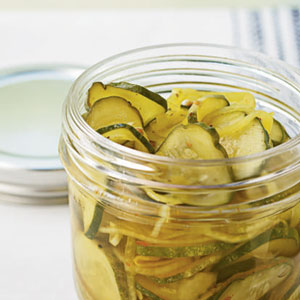 Refrigerator pickles are easy to make and there’s no need for processing, special jars or vacuum-tight lids. Plus, unlike store-bought pickles, these homemade pickles are lower in sodium.

Place 3 cups of the sliced cucumbers in a medium glass bowl; top with 1 cup onion. Repeat procedure with the remaining cucumbers and onions.

Spoon into glass jars for refrigerator storage. Note: Pickles may be stored in the refrigerator for up to one month.

Lightly salting the tomato wedges and letting them stand briefly concentrates their flavor significantly. Be sure to use a sweet onion to maintain the flavor balance in this refreshing salad.

Cut the tomatoes into bite-sized, irregular wedges, discarding any runny seeds. In a small bowl, toss the tomatoes with a pinch of salt and the vinegar. Let the tomatoes stand for up to 30 minutes.

In a mini food processor, pulse the onion until minced; be careful not to over process the onion into a puree.

Shortly before serving, transfer the tomato wedges to a medium bowl with a slotted spoon; discard the tomato juices.

Add the cucumber and onion and toss, then season with salt to taste. Add the olive oil and toss to coat, then add the basil, toss once more and serve.

Try Something Different With Cucumbers 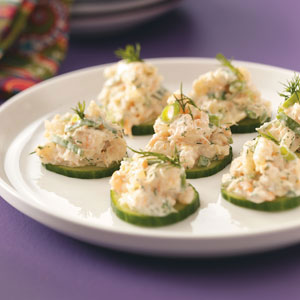 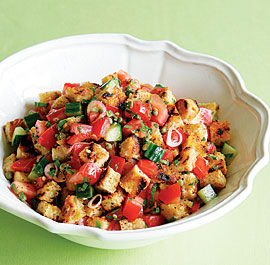 Bread salads are common in the Mediterranean and the Middle East, where frugal cooks use stale bread as the primary ingredient. In this Italian version, called panzanella, char the bread on the grill for added flavor. If you don’t feel like grilling the bread, you can toast it on a grill pan or under a low broiler.

Heat a gas grill with all burners on medium. Brush the bread with 1/4 cup of the oil and season it with 1/4 teaspoon kosher salt and a few grinds of pepper. Grill the bread on both sides, checking frequently, until nicely browned, 3 to 4 minutes per side. When the bread is cool enough to handle, cut it into 1/2-inch cubes.

Toss the bread cubes, tomatoes, cucumber, basil, mint, capers and vinaigrette in the bowl with the shallot. Season the panzanella to taste with kosher salt and pepper and serve. 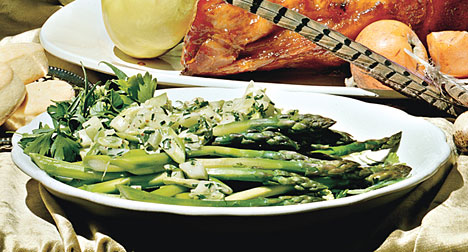 Drain, reserving 3 cups of the cooking liquid. Transfer asparagus to the bowl of salted ice water to cool.

Transfer onions to a clean kitchen towel and squeeze dry.

Add dressing; toss to coat. Season with salt and pepper. Arrange asparagus on platter. Spoon cucumber mixture over and serve. 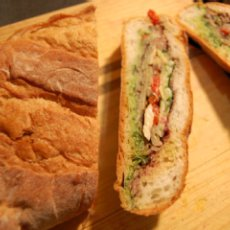 Cut bread in half horizontally. Spread 1/4 cup of the dressing on the bottom half. Top with half of the lettuce.

Spread remaining dressing on the top half of the bread before covering the bottom.

Cover with plastic wrap and place a heavy skillet on top to press it down. Let sit for a few minutes.

Remove skillet and plastic wrap and cut sandwich into 8 wedges.