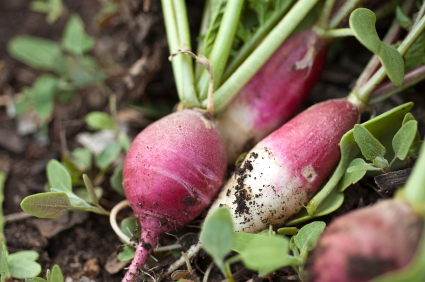 Radishes are members of the Brassicaceae (mustard or cabbage) family. The root is related to kale, broccoli, cauliflower and horseradish, among others. In the horseradish family, radishes are related to wasabi, a type of horseradish, which in paste form is a staple condiment of Japanese cuisine. The name “radish” is said to come from the Latin word “radix”, which means root. Other sources say the radish got its name from the Greek word for “quickly appearing”.

Radishes are thought to date back thousands of years to China and Egyptians grew them even before they began building the pyramids. Later, Romans spread the radish to other cultures. They also believed radishes had medicinal purposes, including helping indigestion and constipation. The ancient Greeks made gold radishes and offered them to Apollo, their god who oversaw medicine, among other things. Other eras and cultures also considered the radish to be medicinal. In the Middle Ages they were thought to help cure insanity.

Europeans introduced radishes into Central America and North America in the 1500’s. The British brought them to North America, when they settled there and radishes were grown by the first English colonists in America. European Radishes, it seems, used to be much larger in general, more like the Asian ones. There is no written record of the small ones until the 1500’s. In France, Radishes were served at the beginning of a meal, to clean the palate and get it ready for the “delights” that were to follow.

Radishes come in many varieties but here are some general types:

The standard or salad type radish can be found in early spring and fall. This variety dislikes heat so some growers do not grow them in the summer.

The first, by far the most common, are Red Globe Radishes, the ones that everyone thinks of when they think of a radish. A small red ball about 1 inch wide, red on the outside and white on the inside.

There are also White Icicle Radishes. These are available earlier in the year and have a milder flavor. They are long like a carrot, with white skin.

French Breakfast or Early Scarlet Globe, are delicious for an early spring radish .

An exciting one to try is Chinese Red Meat or Beauty Heart, also known as the “Watermelon Radish.” Watermelon radishes are so-named for an obvious reason. Anyone who has ever cut into their green skin and and seen their brilliant red-pink interior will know. Scrub clean, cut into wedges and serve as a sharp and beautiful crudite or cut into thin sticks to add to salads.

Black radishes (Spanish radishes) have a black exterior that covers a snowy white flesh. Black radishes are sharp when raw and add a nice bite to salads and raw vegetable plates. When sliced paper-thin, they make beautiful garnishes. Scrub these radishes clean in order to keep the brilliant contrast between the black peel and the white interior. Black radishes also good in gratins and are delicious when cut into wedges and added to pans of roasted vegetables.

If you are looking for a milder type of radish, you might want to try a golden yellow one from Czechoslovakia, called Helios.

The Sicily Giant radish is a large heirloom variety originating from Sicily. It has a smooth, bright red skin and tastes hotter than some other radishes. It can grow up to 2 inches across the widest part.

Another type are known as a winter radishes or Daikon radishes. Some varieties include China Rose, Black Spanish Round or Philadelphia White Box. These are a Japanese variety of radish quite different from the red globe radish we are familiar with. It is long like a carrot and quite big (growing from 5 to 18 inches is hotter than red globe radishes, and its skin is tan colored rather than red, though inside it is still white. They are often pickled or dried, but are delicious grated into soups or added to roasted or braised vegetables. They aren’t usually eaten raw, but can be bright, crispy delights when peeled and cut into very thin slices.

Radishes have many uses, but primarily fall into two different use categories – food and biofuel.

The taproot of the radish is the most commonly eaten portion, despite the entire plant being edible. The tops can be used as a leaf vegetable. There is no particular advantage, though, to saving the leaves. Radish tops aren’t usually eaten like other leaves of the cabbage family are, because they aren’t particularly tasty. Radishes are most often eaten raw, delivering a crisp texture with a spicy, peppery flavor. Radishes are a great low-cal snack; one cup of sliced radishes has only 19 calories. They are also often used in soup and salad recipes.

The radish seeds can also be used to extract seed oil. The seeds contain up to 48% oil that is not suitable for human consumption. However, that oil from the seeds can be refined into biofuels. There are several programs underway to develop this alternative fuel.

Most states grow radishes, but California and Florida boast the biggest crops in the United States. Radishes sold in bunches with their tops on, rather than in bunches with the tops removed, are the freshest (provided the leaves look healthy). Packaged radishes will last longer, though.   Radishes get stronger tasting as their growing season progresses; early ones will be relatively mild.

Wash under cold water, cut off the tops and tails.

Most of the heat in radishes is in the skin. You can peel the skin off radishes if you want to, but they won’t taste or look as great. The radishes are most attractive served whole or in large slices.

If you wish to peel any of the radishes, you can use a vegetable peeler or paring knife, then slice or grate depending on how you are using them.

Radishes make a great addition to a relish tray. In France, they are often the way to start a meal: they are served with butter, sea salt and crusty bread. You split the radish with your knife, spread it apart a bit, put a bit of butter in, dip it in the sea salt on your plate and eat along with the bread.

Any type of Radish can also be cooked.

If you have bought them with the tops on, twist off and discard the tops, and store the radishes in a plastic bag in the refrigerator for up to two weeks.

If any seem to be going a bit soft before you use them, you can crisp them up again by soaking them in ice water for an hour or two. 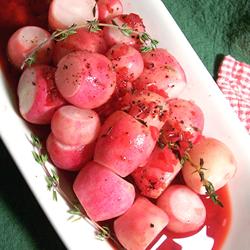 Radishes in Red Wine and Thyme

Add half an onion cut into small pieces and cook till soft and brown.

Remove the onion to a bowl and add 1 clove of minced garlic and cook till aromatic.

Return onions and add 2 sprigs of fresh thyme leaves (chopped) to the pan.

Add one cup water and one 1/4 cup good red wine and heat to a simmer.

Add radishes and cook until tender.

Remove radishes with a slotted spoon and keep warm.

Reduce liquid to make a sauce.

A glass of red wine and some crusty bread are great pairings with this dish. 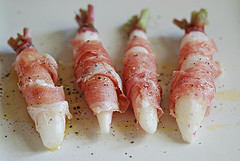 Carefully wrap each radish in a slice of prosciutto. 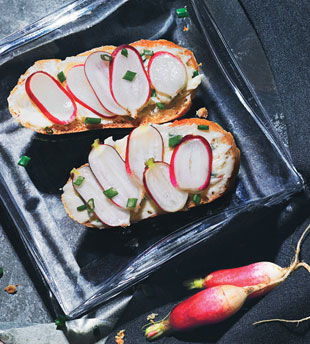 Mix butter, chopped anchovy fillets and chives in a small bowl. Season with salt and freshly ground black pepper. Spread a thin layer of anchovy butter over 1 side of each baguette slice. Top each baguette slice with radish slices, overlapping slightly to cover bread. Garnish with additional chopped chives and serve. 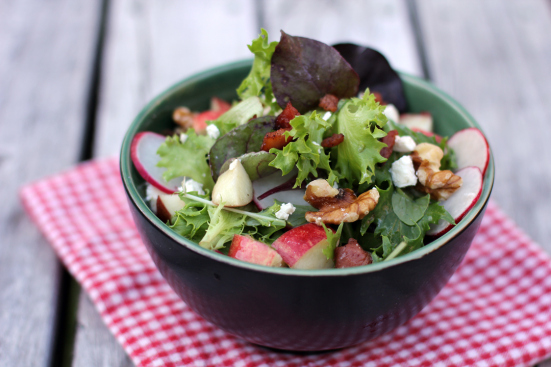 Place dressing ingredients in a large bowl, whisk together and set aside.

Toss salad with dressing and place on four plates. 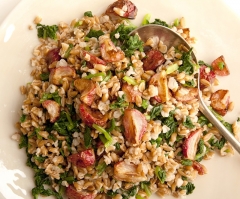 Farro is an ancient type of soft wheat that is often used in soups and salads in Italy. Farro’s delicious nutty taste makes a wonderful base to bulk up cooked vegetable salads.

This recipe also gives you a chance to try radish leaves.  If this doesn’t appeal to you, you can leave them out or substitute another green, such as arugula.

Combine the farro with 6 cups of water and a pinch of salt. Bring to a boil, then cover and reduce to a simmer for about 30 minutes or until the grain is plump and chewy. Drain, then transfer to a large bowl.

Cut the greens off the radishes, chop and set aside. Quarter the radish roots and toss with 1 tablespoon of olive oil, salt and pepper. Spread evenly onto the prepared baking sheet and roast in the oven for 20-30 minutes or until browned and tender.

In a skillet over medium heat, add the remaining 1 tablespoon of olive oil and clove of garlic. Once the garlic begins to turn golden, add the radish greens and cook stirring until wilted, about 3 minutes. Discard the garlic and pour greens into the cooked farro.

Once the radishes have roasted, toss them with the farro and radish greens. Stir in the lemon juice with more salt and pepper to taste. Serve warm or at room temperature.

As In A Main Dish: 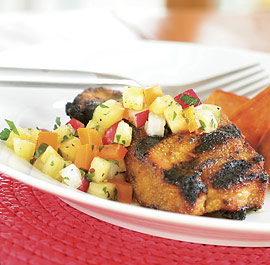 Pineapple Salsa with Radishes and Peppers

In a medium bowl, mix the pineapple, radishes, bell pepper, basil, lemon juice and 1/4 teaspoon each of kosher salt and pepper. Let stand while you grill the meat. 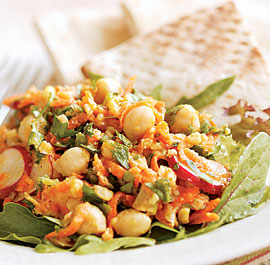 Serves four to six as a vegetarian main dish; eight as a side dish.

Put 1/2 cup of the chickpeas in a mixing bowl and mash them into a coarse paste with a potato masher or large wooden spoon. Add in the remaining chickpeas along with the parsley, carrot, radishes, and scallions. Stir to combine.

In a liquid measuring cup, whisk together the lemon juice, coriander, 1/2 teaspoon salt and a few generous grinds of black pepper. Continue whisking, while adding the olive oil in a slow stream. Pour over the salad and toss gently. Season the salad with additional salt and pepper to taste. Top with the feta and pine nuts and serve with warmed pita bread, sliced into wedges. 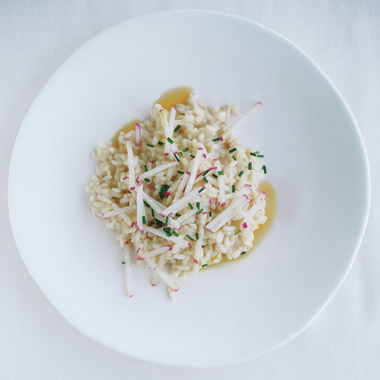 Stir 1 cup simmering broth into rice and cook, stirring constantly, keeping at a strong simmer until absorbed. Continue cooking and adding broth, about 1 cup at a time, stirring frequently and letting each addition be absorbed before adding the next cup, until rice is just tender and creamy-looking but still al dente, 18 to 22 minutes. Thin with some of remaining broth if necessary (you will have some left over). Remove from the heat. Stir in cheese, 1 teaspoon salt, 1/2 teaspoon pepper and remaining 1 tablespoon butter.