Etymologists trace the origin of the word “chocolate” to the Aztec word “xocoatl,” which referred to a bitter drink brewed from cacao beans. The Latin name for the cacao tree, Theobroma cacao, means “food of the gods.” Many modern historians have estimated that chocolate has been around for about 2000 years, but recent research suggests that it may be even older.

In the book, The True History of Chocolate, authors Sophie and Michael Coe make a case that the earliest linguistic evidence of chocolate consumption stretches back three or even four millennia, to pre-Columbian cultures of Mesoamerica. Anthropologists from the University of Pennsylvania recently announced the discovery of cacao residue on pottery excavated in Honduras that could date back as far as 1400 B.C.E. It appears that the sweet pulp of the cacao fruit, which surrounds the beans, was fermented into an alcoholic beverage of the time. 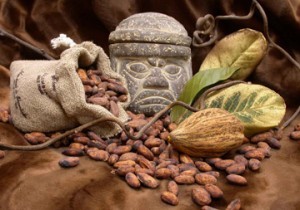 It’s hard to pin down exactly when chocolate was born, but it’s clear that it was cherished from the start. For several centuries in pre-modern Latin America, cacao beans were considered valuable enough to use as currency. One bean could be traded for a tamale, while 100 beans could purchase a good turkey hen, according to a 16th-century Aztec document. Both the Mayans and Aztecs believed the cacao bean had magical or even divine properties, suitable for use in the most sacred rituals of birth, marriage and death. According to Chloe Doutre-Roussel’s book, The Chocolate Connoisseur, Aztec sacrifice victims who felt too melancholy to join in ritual dancing before their death were often given a gourd of chocolate (tinged with the blood of previous victims) to cheer them up.

Sweetened chocolate didn’t appear until Europeans discovered the Americas. Legend has it that the Aztec king, Montezuma, welcomed the Spanish explorer Hernando Cortes with a banquet that included drinking chocolate.  Chocolate didn’t suit the foreigners’ tastebuds at first –one described it in his writings as “a bitter drink for pigs” – but once mixed with honey or cane sugar, it quickly became popular throughout Spain.

By the 17th century, chocolate was a fashionable drink throughout Europe, believed to have nutritious, medicinal and even aphrodisiac properties. But it remained largely a privilege of the rich until the invention of the steam engine made mass production possible in the late 1700’s.

In 1828, a Dutch chemist found a way to make powdered chocolate by removing about half the natural fat (cacao butter) from chocolate liquor, pulverizing what remained and treating the mixture with alkaline salts to cut the bitter taste. His product became known as “Dutch cocoa” and it soon led to the creation of solid chocolate.

The creation of the first modern chocolate bar is credited to Joseph Fry, who in 1847 discovered that he could make a moldable chocolate paste by adding melted cacao butter back into Dutch cocoa. By 1868, a little company called Cadbury was marketing boxes of chocolate candies in England. Milk chocolate hit the market a few years later, pioneered by another name that will sound familiar– Nestle.

In America, chocolate was so valued during the Revolutionary War that it was included in soldiers’ rations and used in lieu of wages. Chocolate manufacturing is more than a 4-billion-dollar industry in the United States and the average American eats at least half a pound per month. 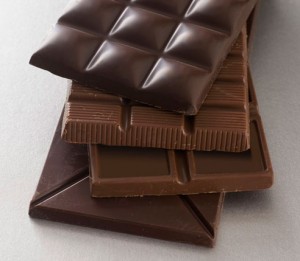 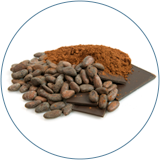 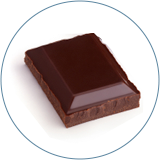 One ounce of chocolate

The higher the cacao (kuh-KOW) content number, the less sugar. Vanilla and lecithin usually make up less than 1 percent.

Sweetened chocolate with high content of cocoa solids and no or very little milk may contain up to 12% milk solids. Dark chocolate can either be sweet, semi-sweet, bittersweet or unsweetened. If a recipe specifies ‘dark chocolate’ you should use semi-sweet dark chocolate. 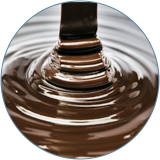 This is the classic baking chocolate which can be purchased in most grocery stores. It is frequently used for cakes, cookies and brownies and can be used instead of sweet dark chocolate. It has a good, sweet flavor. Contains 40-62% cocoa solids. 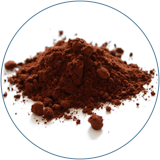 A bitter chocolate which is only used for baking. The flavor is not suitable for eating. Use it only if a recipe specifies “unsweetened chocolate”. It contains almost 100% cocoa solids and about half of it may be fat (cocoa butter). 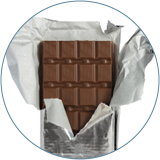 Sweet chocolate which normally contains 10-20% cocoa solids (which includes cocoa and cocoa butter) and more than 12% milk solids. It is seldom used for baking, except for cookies. An ounce of milk chocolate can contain 75 percent less cacao and twice as much sugar as the darkest chocolate. 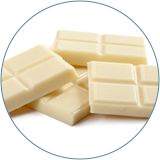 Chocolate made with cocoa butter, sugar, milk, vanilla and sometimes other flavorings. It does not contain any ingredients from the cacao bean and, therefore, has an off-white color. In some countries white chocolate cannot be called ‘chocolate’ because of the low content of cocoa solids. It has a mild and pleasant flavor and can be used to make Mousse, Panna Cotta and other desserts.

Here are some healthy recipes without too many calories to indulge your chocolate sweet tooth: 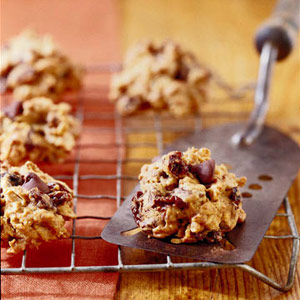 In a small bowl combine raisins and boiling water; set aside.

In the large bowl of an electric mixer, combine peanut butter and butter; beat on medium speed for 30 seconds. Add sugar or sugar substitute, egg product, cinnamon, vanilla and baking soda. Beat until combined. Add the flour; beat until smooth. Stir in the oats.

Drop dough by rounded tablespoons onto prepared cookie sheets. Bake about 12 minutes or until lightly browned, reversing pans in the oven after six minutes. 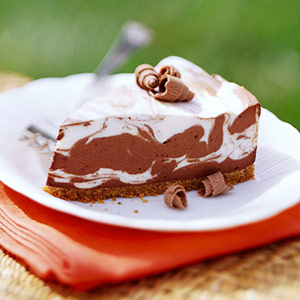 In a medium bowl stir together finely crushed graham crackers and melted butter until crumbs are moistened. Press mixture evenly onto bottom of an 8-inch springform pan. Cover and chill while preparing filling.

In a small saucepan sprinkle gelatin over milk; let stand for 5 minutes. Heat and stir over low heat just until gelatin is dissolved. Remove from heat. Cool for 15 minutes.

In the large bowl of an electric mixer, beat cream cheeses until smooth. Beat in sour cream, sugar and vanilla until well mixed; gradually beat in gelatin mixture. Divide mixture in half. Gradually stir melted chocolate into half of the mixture.

To serve, using a small sharp knife, loosen cheesecake from side of springform pan; remove side of pan. Cut cheesecake into wedges. If desired, garnish with chocolate curls. Makes 16 slices.

Make-Ahead Directions: Prepare as directed, except cover and chill for up to 24 hours. 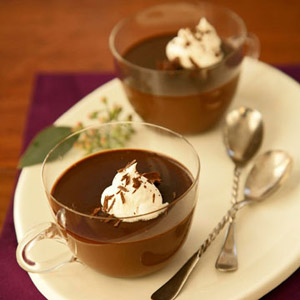 In a heavy small saucepan combine milk, sugar, whipped topping, chocolate, margarine, cocoa powder and coffee powder. Cook and stir over medium heat for 10 to 15 minutes or until the mixture boils and begins to thicken. Reduce heat to low. Cook and stir for 2 minutes more. Remove from heat.

Stir in vanilla, amaretto and almond extract. Pour chocolate mixture into six small heatproof cups or pots de creme cups. Cover and chill for 2 hours or overnight or until set.

Tip: If you use egg substitute, the mixture will be softer set. 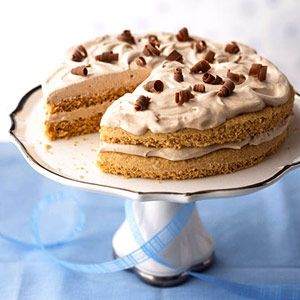 Bake for 10 to 12 minutes or until a toothpick inserted in center comes out clean. Cool cake layers in pans on wire racks for 10 minutes. Remove from pans. Cool completely on wire racks.

Place one of the cake layers on a serving plate. Spread top with half of the White Mocha Filling. Top with remaining cake layer and remaining filling. Loosely cover. Chill frosted cake for 2 to 24 hours. If desired, garnish with chocolate curls. Makes 16 slices. 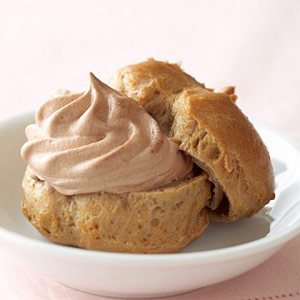 In a medium saucepan combine the water, butter, coffee crystals and salt. Bring to boiling. Add flour all at once, stirring vigorously. Cook and stir until a ball forms that doesn’t separate. Cool for 5 minutes.

Add eggs, one at a time, beating with a wooden spoon after each addition until smooth. Drop into 20 small mounds onto prepared baking sheet. Bake about 25 minutes or until brown.

Make-Ahead Directions: Prepare and bake cream puffs; cover and store at room temperature for up to 24 hours. Prepare Mocha Filling as directed; cover and chill for up to 2 hours. Fill cream puffs just before serving. 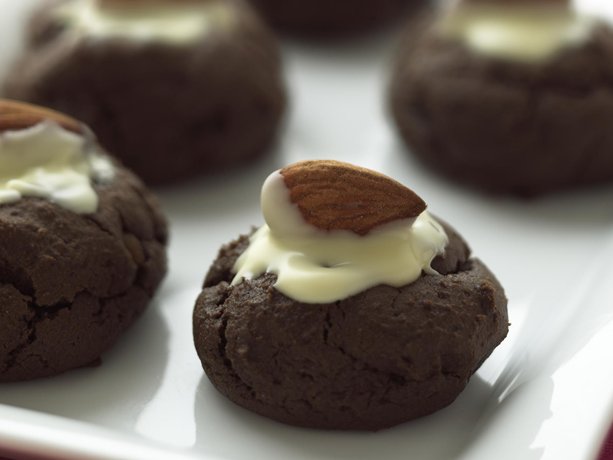 In the large bowl of an electric mixer beat butter on medium to high speed for 30 seconds.

Beat in as much of the flour as you can with the mixer. Using a wooden spoon, stir in any remaining flour. Cover and chill dough for 1 to 2 hours or until easy to handle.

Bake for 6 to 8 minutes or just until edges are firm. Transfer cookies to a wire rack; cool.

In a small saucepan combine white chocolate and shortening; heat and stir over low heat until melted and smooth.