A few little facts: The banana is a perennial plant that replaces itself. Bananas do not grow from a seed but from a bulb or rhizome. Note: The banana plant is not a tree. It is actually the world’s largest herb! The time between planting a banana plant and the harvest of the banana bunch is from 9 to 12 months. The flower appears in the sixth or seventh month. Bananas are available throughout the year – they do not have a growing season. Bananas are grown in tropical regions where the average temperature is 80° F (27° C) and the yearly rainfall is between 78 and 98 inches. They require moist soil with good drainage.

In fact, most exported bananas are grown within 30 degrees of either side of the equator. Plantations are predominant in Latin America and they require a huge investment in infrastructure and technology for transport, irrigation, drainage and packing facilities. Banana growing is, in general, labor intensive, involving clearing away jungle growth, propping up the plants to counter bending from the weight of the growing fruit, and installing irrigation in some regions. As well as implementing an intensive use of pesticides, the conventional production process involves covering banana bunches with polyethylene bags to protect them from wind, attacks of insects or birds and to maintain optimum temperatures.

After nine months, the bananas are harvested while still green. At the packhouse they are inspected and sorted for export. Buyers of the fruit want unbruised bananas and so very high standards are set. If the bananas do not meet these standards they are usually sold locally at a much lower price.They are then transported to ports to be packed in refrigerated ships called reefers. They are transported at a temperature of 55.94 degrees F. (13.3°C ) in order to increase their shelf life and require careful handling in order to prevent damage. Humidity, ventilation and temperature conditions are carefully monitored in order to maintain quality. When the bananas arrive at their destination port, they are first sent to ripening rooms (a process involving ethylene gas) and then sent to the stores and markets. 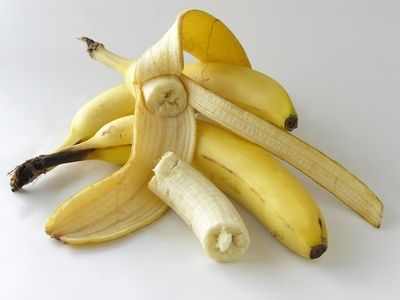 The true origin of bananas is found in the region of Malaysia. Bananas traveled from there to India where they are mentioned in the Buddhist Pali writings dating back to the 6th century BCE. In his campaign in India in 327 BCE, Alexander the Great had his first taste of the banana, an unusual fruit he saw growing on tall trees, and he is credited with bringing the banana from India to the Western world. According to Chinese historian, Yang Fu, China was tending plantations of bananas in 200 CE. These bananas grew only in the southern region of China and were considered exotic, rare fruits that never became popular with the Chinese people until the 20th century.

Eventually, this tropical fruit reached Madagascar, an island off the southeastern coast of Africa. Beginning in 650 CE, the Arabs were successful in trading ivory and bananas. Through their numerous travels westward via the slave trade, bananas eventually reached Guinea, a small area along the West Coast of Africa. Arabian slave traders are also credited with giving the banana its popular name. The bananas that were growing in Africa, as well as Southeast Asia, were not the eight-to-twelve-inch fruits that have become familiar in U.S. supermarkets today. They were small, about as long as a man’s finger, therefore, the name banan, Arabic for finger.

By 1402 Portuguese sailors discovered this tropical fruit in their travels to the African continent and populated the Canary Islands with the first banana plantations. Continuing the banana’s travels westward, the rootstocks were packed onto a ship under the charge of Tomas de Berlanga, a Portuguese Franciscan monk, who brought them to the Caribbean island of Santo Domingo in the year 1516. It wasn’t long before the banana became popular throughout the Caribbean, as well as Central America.

It was almost three hundred and fifty years later that Americans tasted the first bananas to arrive in their country. Wrapped in tin foil, bananas were sold for 10 cents each at a celebration held in Pennsylvania in 1876 to commemorate the hundredth anniversary of the Declaration of Independence. Instructions on how to eat a banana appeared in the Domestic Cyclopaedia of Practical Information and read as follows: “Bananas are eaten raw, either alone or cut in slices with sugar and cream, or wine and orange juice. They are also roasted, fried or boiled, and are made into fritters, preserves, and marmalades.”

How did bananas get to Italy?

Italian Somaliland, also known as Italian Somalia, was a colony of the Kingdom of Italy from the 1880s until 1936 in the region of modern-day Somalia. Ruled in the 19th century by the Somali Sultanate of Hobyo and the Majeerteen Sultanate, the territory was later acquired by Italy through various treaties. In 1936, the region was incorporated into Africa Orientale Italiana, as part of the Italian Empire. This arrangement would last until 1941, when Italian Somaliland came under British administration. The two major economic developments of the Italian colonial era were the establishment of plantations and the creation of a salaried workers. In the south, the Italians laid the basis for profitable export-oriented agriculture, primarily in bananas, through the creation of plantations and irrigation systems. Banana exports to Italy began in 1927 and gained primary importance in the colony after 1929, when the world cotton market collapsed. 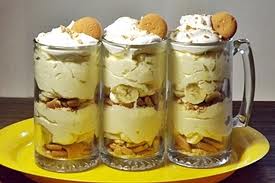 In a large mixing bowl place the coffee creamer, milk, pudding mix and vanilla extract. Whisk for 2 minutes until thickened; place the bowl in the refrigerator.

Place six 1-cup dessert dishes or ramekins on work surface. Spoon a few tablespoons of pudding mixture into each dish. Place 4 cookies on pudding; top with banana slices. Layer in the same way ending with pudding and making sure cookies and bananas are covered on the top layer. Cover dishes with plastic wrap and refrigerate at least 45 minutes. Before serving, sprinkle each with chopped hazelnuts. 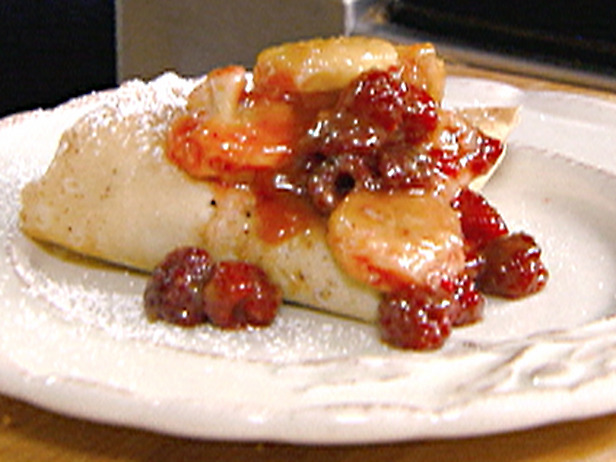 In a non-reactive bowl, whisk together the eggs and milk. In a separate bowl mix the flour and salt. Place a small sauce pan or saute pan over low heat and melt the butter; cook it until it is light brown.

Add the egg and milk to the flour and salt and mix well so that there are no large clumps. Add the browned butter and mix to incorporate, being careful not to overwork batter. The batter should just coat the back of a spoon. If seems too thick, thin it out with a little more milk or water. Let the batter rest for 1 hour prior to cooking crepes.

Peel bananas, cut in half lengthwise and then cut 1/2-inch slices widthwise. In a large saute pan over medium-high heat melt the butter and cook until lightly browned, add the bay leaves to the hot butter and cook until it crackles slightly, add the lemon juice and sugar, stirring so that the sugar dissolves. Add the bananas and orange juice and cook for about 3 to 5 minutes so the flavors incorporate and the bananas are hot but not mushy. Add the raspberries. Stir gently to combine. Set this mixture aside and let cool slightly.

After the crepe batter has rested for 1 hour, heat 1 (10-inch) nonstick saute pan over medium heat. Add 2 ounces of the crepe batter to the pan, remove pan from heat and tilt slightly to spread the batter over the entire pan. Return to heat and sprinkle the top with 1 teaspoon of the chopped hazelnuts. Cook for about 1 minute until the bottom side is lightly browned. With your fingertips and a spatula, carefully flip crepe and cook the second side for about 15 seconds. Set the cooked crepe on a baking sheet and repeat until you have used all of the batter. You should be able to produce 8 to 10 crepes.

Lay the crepes out on a flat surface. Spread each crepe with about 1 tablespoon of hazelnut spread. Spoon about 2 tablespoons of the banana mixture on one section of the crepe and fold the crepe over in half and in half again so that it forms a triangular shape. Repeat this with all of the crepes.

In a small saute pan over medium heat melt the butter and cook until lightly browned, add the lemon juice and brown sugar and stir to dissolve. Serve the crepes on a plate with the sauce spooned over the top and sprinkled with the remaining chopped hazelnuts and confectioners’ sugar.

Grilling bananas is a unique way to cook them. Prepare this dish when you can take advantage of a still very hot grill from a barbecue dinner, but remember to scrape the grilling grate with a grill spatula and let some of the bits burn off from any previous food that was cooked before placing the bananas on the grill. 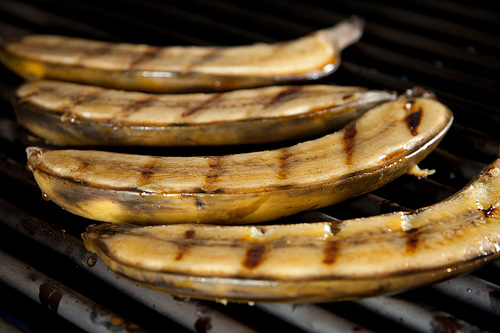 1. Prepare a hot charcoal fire or preheat a gas grill on high for 15 minutes.

2. Put the unpeeled bananas on the grill 1 to 2 inches from the source of the heat until they blacken on both sides.

3. Remove from the grill, slice the bananas open lengthwise, leaving them in their peels, and sprinkle a tablespoon of liqueur, a shake of powdered sugar and cinnamon on each and serve. 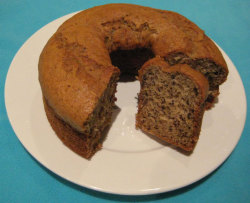 Combine bananas, eggs and oil in a small bowl.

Sift flour, expresso powder and baking soda into a large bowl. Mix in sugar. Make a well in the center and add the bananas mixture.

Stir until mixture is smooth. Pour into mixture into pan, spread eveningly and bake for 1 hour.

Allow the cake to sit on the wire cooling rack for ten minutes. Remove from pan. Sprinkle with powdered sugar when cool. 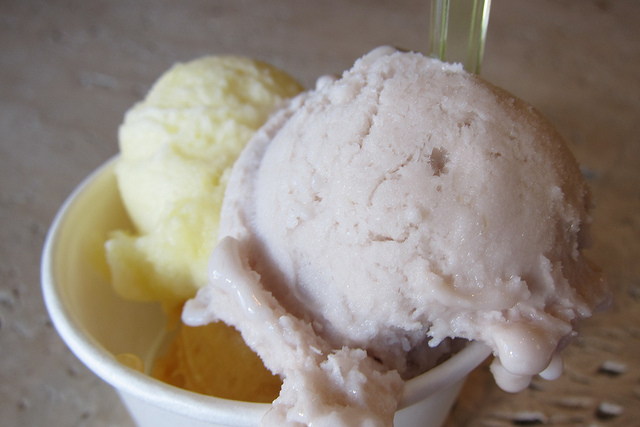 Peel bananas; cut into thirds. In heavy-bottom saucepan, bring bananas and milk to boil over medium-high heat; reduce heat and simmer until bananas are very soft, about 5 minutes. Let cool for 10 minutes.

In electric mixer large bowl, whisk egg yolks with sugar until pale yellow and frothy. Slowly whisk in banana mixture. Return mixture to the saucepan; cook over medium-low heat, stirring constantly, until banana mixture is thick enough to coat back of spoon, about 5 minutes. Pour into a bowl and place plastic wrap directly on the banana mixture surface; refrigerate until cold, about 2 hours. Stir in rum. Chill another 2 hours in the refrigerator.

Freeze banana mixture in ice-cream machine according to manufacturer’s instructions. 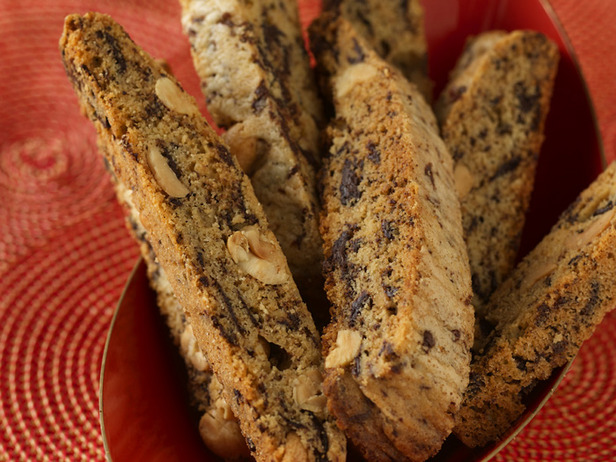 In a large bowl, whisk together flours, baking powder, sugar and salt.

In a medium bowl, combine bananas, oil, egg and vanilla.

Pour banana mixture into dry mixture along with nuts and chocolate chips, stir together.

Flour a working area and turn dough out onto it. Flour hands as dough is sticky. Form two 7 inch loaves about 2 inches wide.

Bake at 350 degrees F. for 25 minutes. Remove from oven and turn temperature down to 250 degrees F.

Bake for an additional 18-20 minutes.