Give Quinoa An Italian Accent 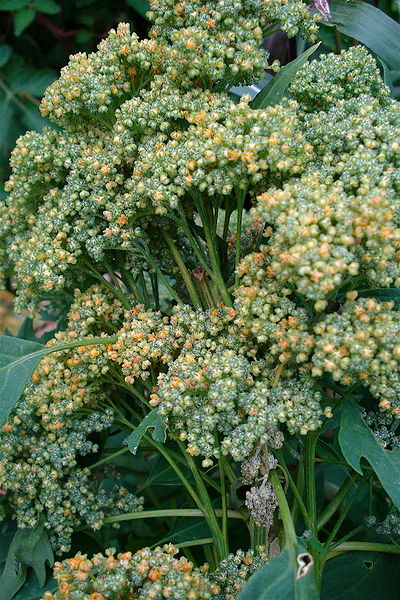 Quinoa is a complete protein containing all eight essential amino acids. It’s light and fluffy in texture but has that whole grain ability to fill people up.

The quinoa plant is native to the Andean regions of Peru, Bolivia and Chile on the continent of South America. There are many different types of quinoa, including wild quinoa which is still grown today. While wild quinoa has been cultivated as a crop in some areas, it is considered a weed in others. The quinoa we eat today has been cultivated in South America for around 5000 years. Archeological evidence suggests that some of the wilder forms of quinoa were also cultivated in this same region as long ago as 9,000 years. 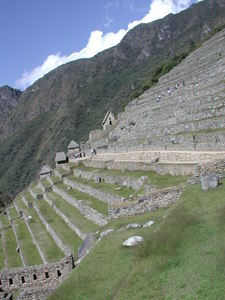 In the 16th century, when the Spanish invaded the Andes region, the Incas were forced into submission and the cultivation and consumption of quinoa was banned due to its association with non- Christian ceremonies. The Incas were forced to grow corn and potatoes instead, but some wild quinoa continued to grow and a small amount was able to be cultivated. So in secret, quinoa survived.

Quinoa was imported into the US in the 1970’s and has seen an increase in popularity in western cultures, particularly in the last 5  years. While quinoa is now commercially grown in some other areas of the world, the majority still comes from the same South American regions that it originated from.

Quinoa is generally available in prepackaged containers as well as bulk bins. Whether purchasing quinoa in bulk or in a packaged container, make sure that there is no evidence of moisture. When deciding upon the amount to purchase, remember that quinoa expands during the cooking process to several times its original size. If you cannot find it in your local supermarket, look for it at natural foods stores, which usually carry it. 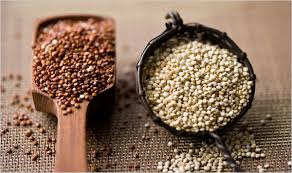 The most common type of quinoa you will find in the store has an off-white color but red and black quinoa are becoming more available.

Store quinoa in an airtight container. It will keep for a longer period of time, approximately three to six months, if stored in the refrigerator.

Quinoa has a coating on it called saponin that is very bitter. Place the quinoa in a fine strainer and run it under cold water for a few minutes before placing it in boiling water.

Quinoa has a light, fluffy texture when cooked. Its mild, slightly nutty flavor makes it a great alternative to white rice or couscous. Quinoa cooks quickly, so it adds an element of ease to any recipe. This is not typically a grain used by Italian cooks, but it provides much nutritional value and flavor when added to Italian flavored soups.

How To Cook Quinoa

Method: Rinse quinoa in a fine sieve until water runs clear, drain and transfer to a medium pot. Add water and salt and bring to a boil. Cover, reduce heat to medium low and simmer until water is absorbed, 15 to 20 minutes. Set aside, off the heat, for 5 minutes; uncover and fluff with a fork. 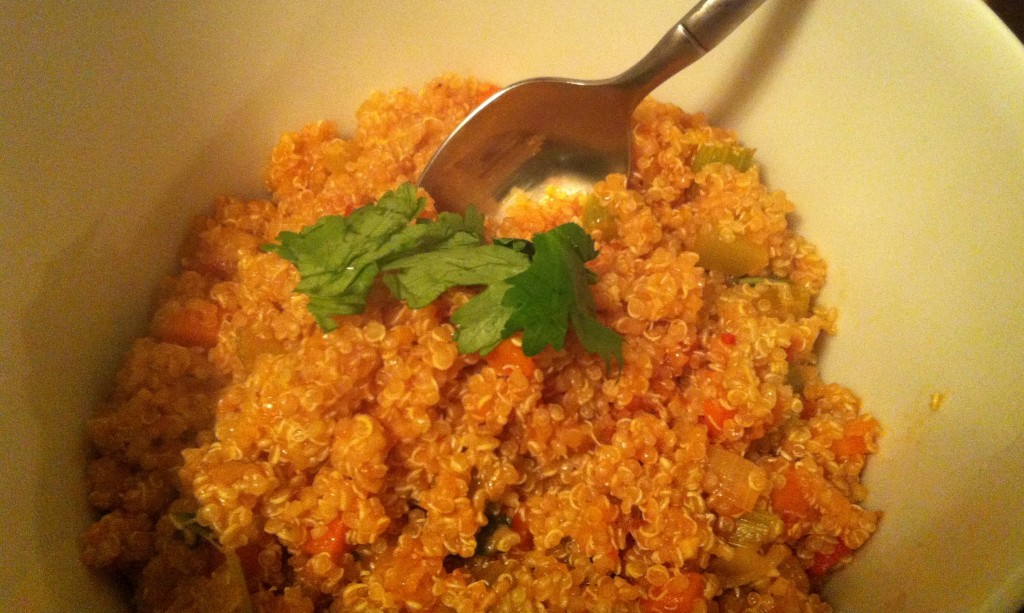 Cook quinoa according to package (usually takes about 10-15 minutes).

While quinoa is cooking heat oil over low/medium in separate pan.

Add basil and oregano, stir to combine, and cook for two more minutes.

Once quinoa is done cooking combine the vegetables mixture with the quinoa and mix well. 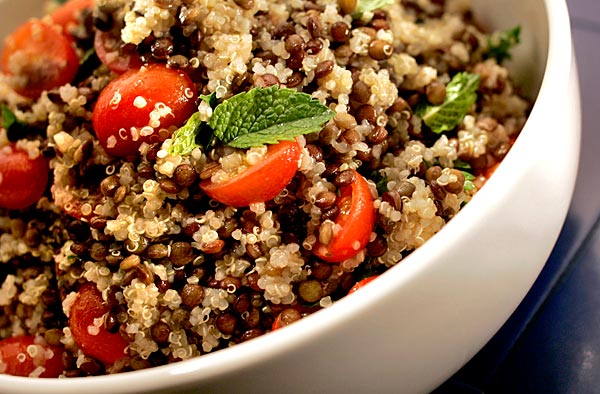 Put the quinoa in a sieve and rinse in cold water. In a large microwave-proof bowl with a cover, add the rinsed quinoa and 1 1/4 cups water. Cover and microwave on high for 9 minutes. Let it sit for 2 minutes then stir. Quinoa should be tender enough to eat, but with a little bite.

In a small bowl, whisk the mustard and vinegar together. Drizzle in the oil to make an emulsion. Add the garlic powder, lemon zest, salt and pepper.

To assemble the salad:

Mix the quinoa, lentils, green onions, tomatoes. olives and chopped mint. Top the salad with the dressing, toss to coat and serve. 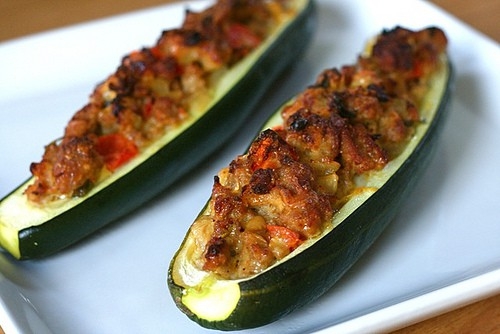 Cut a slice off the side of the zucchini to create a large boat. Scoop out the inside of the squash leaving a shell and bake the shell in the preheated oven for 15 minutes.

Dice the scooped out zucchini to use in the filling.

While the zucchini shells bake, brown the turkey sausage in olive oil over medium heat, breaking it up into small pieces as it cooks.

Add the onions, garlic, tomatoes and diced zucchini. Cook until softened (about 5-10 minutes).

Add the herbs, quinoa and broth and cook for a few more minutes.

Remove from heat and mix in the cheese and salt and pepper.

Removes the shells from the oven and stuff them all as full as possible with the sausage mixture.

Sprinkle with additional Pecorino-Romano cheese and return to oven to bake for at least another 20 minutes or longer depending on the size of the zucchini boats. 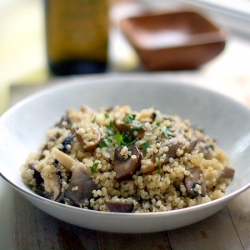 Serves 2 as a main course, 4 as a side dish or appetizer

1. To rehydrate porcinis: cover in boiling water and let soften 20-30 minutes; or you can boil them for about 5 minutes to rehydrate faster. Save the liquid to add to the broth for cooking the quinoa, but make sure to strain the liquid through a coffee filter to remove any sand or residue.

2. In a heavy nonstick frying pan over medium-low heat, lightly toast the quinoa until slightly golden, about 5 minutes. Pour in 1 cup of the liquid, stirring as you go. Add the rehydrated porcini mushrooms and stir frequently.

3. When the liquid has been absorbed by the grains, add more of the liquid a little at a time, continuing until the grains have absorbed it all and are tender but al dente, about 15-25 minutes total.

4. In a saute pan melt butter over medium-high heat and add the fresh mushrooms and the onion ,cooking until lightly browned and softened, about 10 minutes. Add the garlic about halfway through.

5. Add the mushroom mixture, sour cream and nutmeg; to the quinoa, cover and remove from the heat. Let stand for 10 minutes, then fluff with a fork, garnish with the basil and serve. 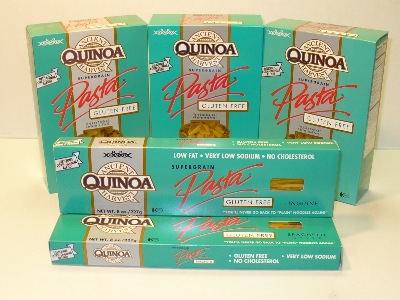 Try this pasta with your favorite spaghetti sauce and meatballs. It is also great with basil pesto sauce. 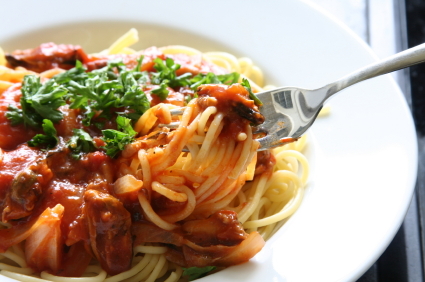 Bring a large pot of salted water to a boil. Cook the quinoa spaghetti according to package directions. Do not overcook. Drain and set aside.

To serve, toss the cooked spaghetti with the meat sauce and place in a large serving bowl. Garnish with sprigs of fresh basil. Serve with crusty Italian bread and Parmigiano-Reggiano cheese on the side. 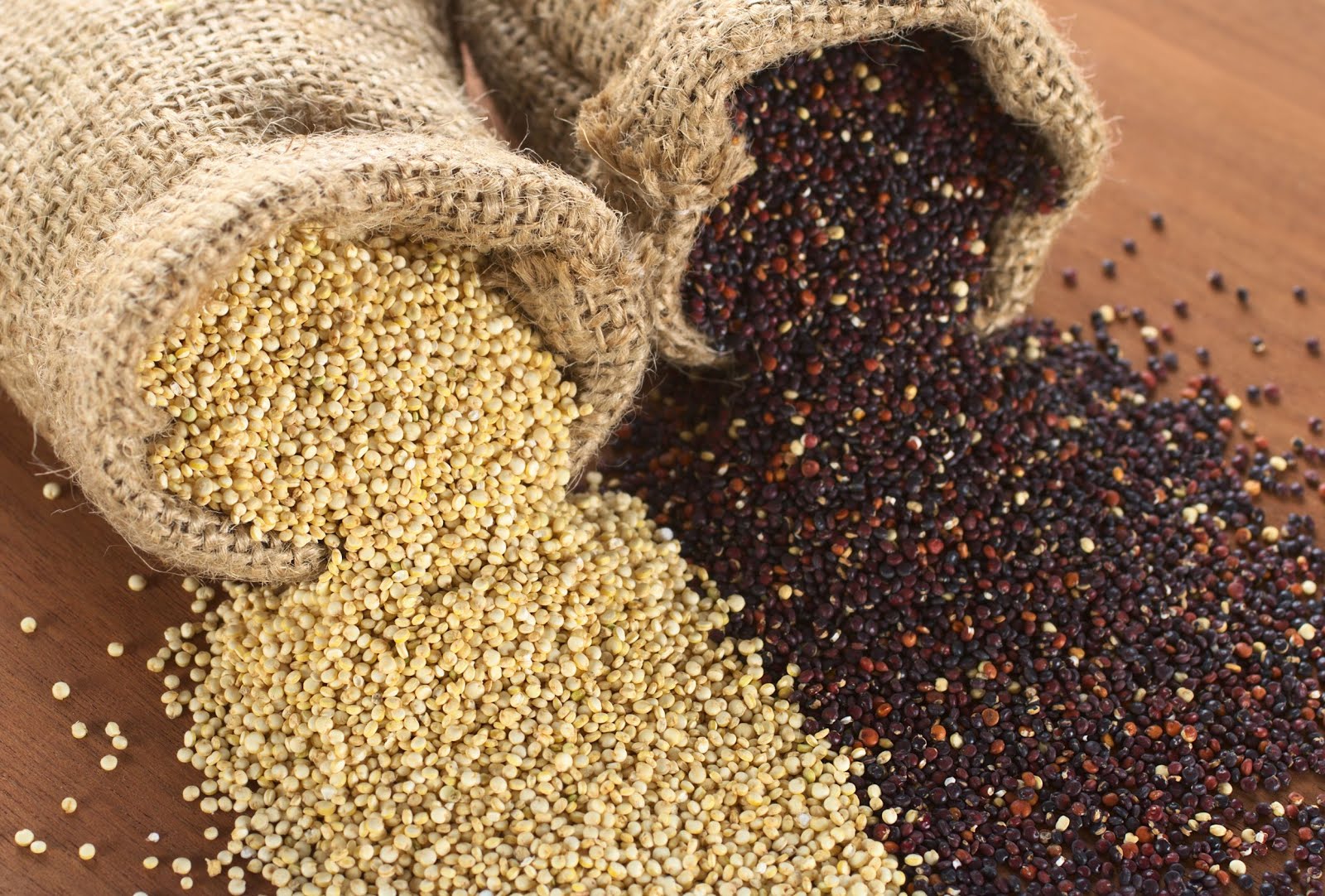 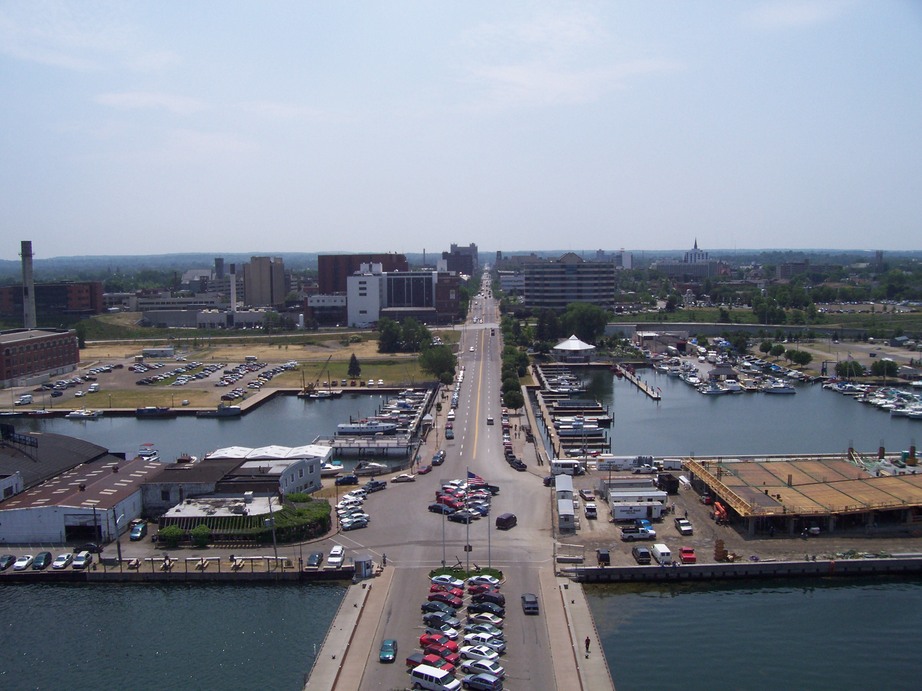