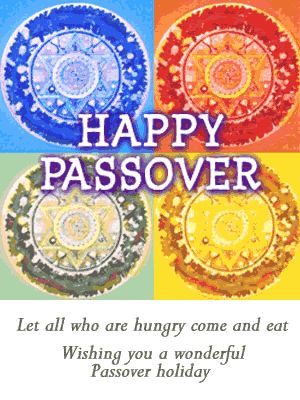 People rarely associate Judaism with Italy, probably because Rome has hosted the seat of the Catholic Church for close to 2000 years. Jews arrived long before the Christians, however. Jewish traders built one of the first synagogues in Ostia Antica (an area just outside of present day Rome) during the second century BC. With time the Jewish population grew and swelled and historians have calculated that by the reign of Tiberius (14-37 AD), there were more than 50,000 Jews living in Rome and dozens of Jewish communities scattered throughout the Roman territory.

Like their fellow countrymen, Italian Jews suffered through thousands of years of invasions that followed the fall of the Roman Empire, but they managed to live fairly peacefully almost everywhere — from Venice, where the Isola della Giudecca (across the canal from Piazza San Marco) is so named because it was the home of many Jews, to the Arab lands of south Italy. At least until 1492, when the Spaniards drove the Arabs back across the Mediterranean Sea into Africa and turned the liberated territories of Sicily and Southern Italy over to the Inquisition. Southern Italian Jews fled north to more tolerant regions, where they were joined by Jews from other parts of Europe as well. Florence, Torino, Mantova and Bologna all had strong Jewish communities during the renaissance. 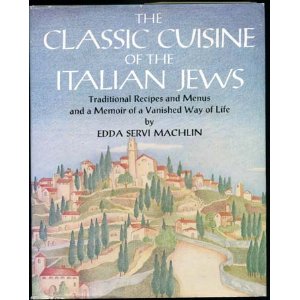 Edda Servi Machlin, whose father was the Rabbi in the Tuscan town of Pitigliano, joined the partisans in the hills when Italy surrendered to the Nazis in 1943. After the war, she settled in the United States and raised a family. However, she didn’t forget her homeland, nor the foods her family ate. Through the years, she has lectured widely on Italian Jewish life and gathered her recollections of life and cuisine into a book titled, The Classic Cuisine of the Italian Jews.

The Jewish people celebrate Passover as a commemoration of their liberation over 3,300 years ago from slavery in ancient Egypt. When the Pharaoh freed the Israelites, it is said that they left in such a hurry that they could not wait for bread dough to rise. For the duration of Passover no leavened bread is eaten and that is why Passover is also called “The Festival of the Unleavened Bread”. Matzo (flat unleavened bread) is a symbol of the holiday. Other scholars teach that in the time of the Exodus, matzo was commonly baked for the purpose of traveling because it did not spo[l and was light to carry, suggesting that matzo was baked intentionally for the long journey ahead. 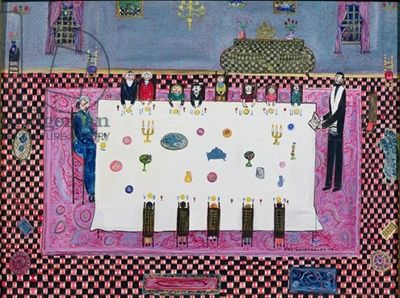 The Passover Meal By Dora Artist

It is traditional for Jewish families to gather on the first night of Passover for a special dinner called a seder. The table is set with the finest china and silverware to reflect the importance of the meal. During this meal, the story of the Exodus from Egypt is retold using a special text called the Haggadah. The Passover seder is one of the great traditions of the Jewish faith, but it can also be a test of endurance. As the premeal chants and readings stretch on, empty stomachs growl and attention wanes until the moment when the charoset is passed around. “With unleavened bread and bitter herbs they shall eat it,” is recited while biting into the Passover matzoh, horseradish and charoset. One of the most revered of Jewish dishes, it closes the ceremony and begins the feast. 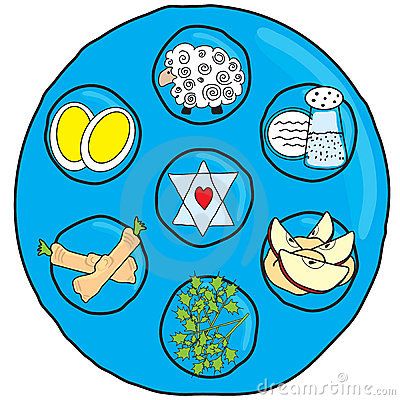 Charoset comes from the Hebrew word cheres, which means “clay.” Charoset is a dense fruit paste that represents the mortar used by the ancient Hebrew slaves in Egypt to make bricks.

Because Passover celebrates freedom, a small amount of charoset is placed on the seder plate as a reminder to Jews that they were once slaves and they should not take their freedom for granted.

Recipes for charoset are as many as there are Jewish people. Italian varieties vary from family to family, including everything from almonds, apples and pears to chestnuts, oranges and even hard-boiled eggs. 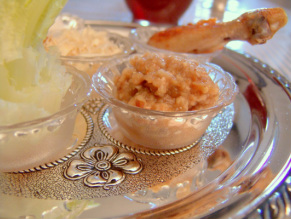 Put everything in the blender and process until combined, but it shouldn’t be too smooth.

Cook on a low flame for 15 minutes, stirring. Add some sweet wine or grape juice right before serving. 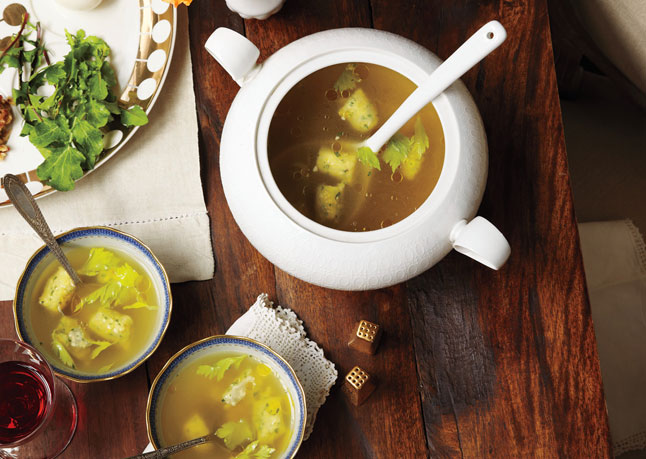 Place first 8 ingredients and 5 quarts water in a large soup pot; season with salt. Bring to a simmer over medium heat. Skim foam from surface; reduce heat to low and cook, keeping at a low simmer and skimming occasionally, for 3 hours.

Using tongs, remove chicken from broth and reserve for another use. Strain broth into a large bowl through a fine-mesh sieve (if desired, line sieve with cheesecloth for clearer broth); set aside. Discard solids. Add kosher salt and pepper to taste.

DO AHEAD: Can be made 3 days ahead. Chill uncovered until cold. Cover; keep chilled.

Preheat oven to 400°. Bake potato until tender, about 1 hour. Let cool slightly. Peel potato and pass through a ricer or food mill, or press through the holes in a colander into a medium bowl. Add matzo meal, herbs and nutmeg; season to taste with salt and pepper. Add yolks; stir to form a dough.

Divide dough into 4 pieces. Working with 1 piece at a time and keeping the others covered with a kitchen towel, roll dough into a 12-inch-long rope. Cut into 1-inch pieces. Transfer gnocchi to a parchment paper-lined rimmed baking sheet. Cover with towel.

Bring broth to a simmer in a large pot over medium heat. Add gnocchi; simmer until tender, 4–5 minutes. Divide mixture among bowls. Drizzle with oil; garnish with celery leaves. 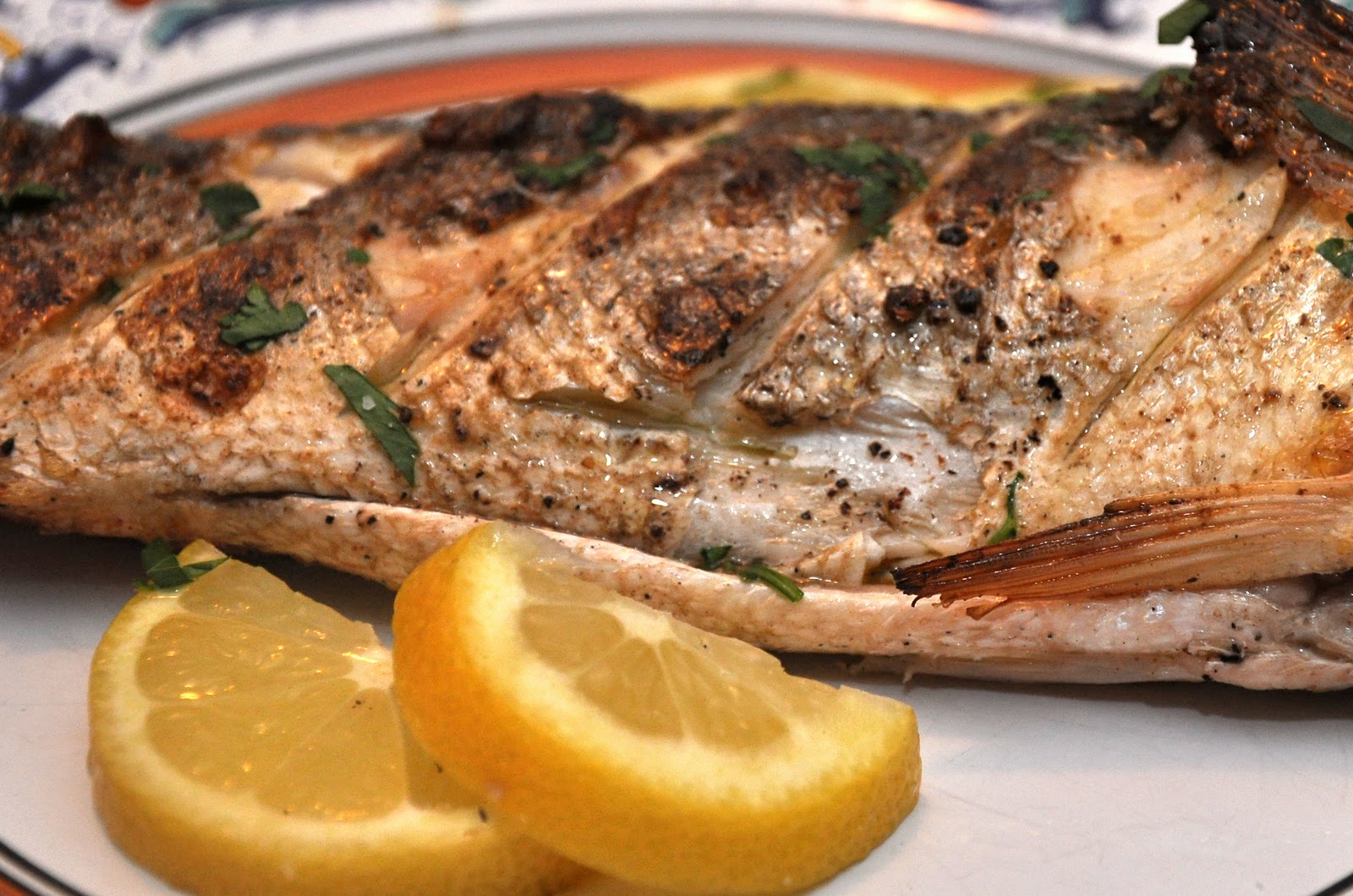 This baked snapper is an Italian Passover tradition. It’s also an interesting variation on the standard roasted fish one generally encounters in Italy, which simply has rosemary and lemon in the cavity and a little more rosemary and lemon outside. In this recipe there are anchovy fillets added and the dish will work with any kind of fish.

Clean the fish, wash the cavity and pat it dry inside and out. Lightly season it inside and out with salt and pepper, set the fish in an oiled baking dish and place the rosemary into the cavity, distributing them evenly. Measure the thickness of the fish at its thickest point.

Heat the anchovies in a quarter cup of olive oil, stirring them around until they dissolve into a paste. Remove the pot from the fire and stir in the matzo meal and the parsley. Spread the mixture over the top of the fish.

Figuring ten minutes per inch of thickness, bake the fish until done. This will be between 20 and 30 minutes for smaller fish and up to about 45 for a large one.

Serve with the lemon wedges as garnish. 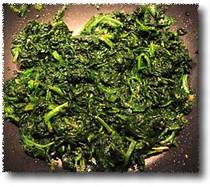 Pick over the spinach, removing and discarding tough ribs and coarsely chop the leaves.

Place in a large pot and heat until it has wilted.

Drain it well, squeezing it to remove most of the water.

Add the oil, garlic and crushed red pepper to the pan. When hot, add the spinach and stir vigorously. Season with salt and pepper to taste.

Note: If you’re pressed for time, you can use frozen spinach, though you should thaw it before sauteeing it.

Place the olive oil and garlic in a large resealable bag. Add cauliflower and shake to mix.

Pour into the prepared casserole dish and season with salt and pepper to taste.

Bake for 25 minutes, stirring halfway through.

Top with Parmesan cheese and parsley and broil for 3 to 5 minutes, until golden brown. 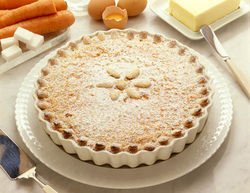 Did you think carrot cake was an American dessert? In the Veneto region, Italian Jews have had many versions of this dessert for centuries, minus the cheese frosting.

Beat the yolks with the sugar, add the grated carrots, the almonds, salt, cinnamon and Amaretto. In a separate clean bowl beat the egg whites until thick.

Gradually fold the whites into the carrot mixture.

Butter a 9 inch tart pan and dust with matzo meal

Pour the mixture into the pan and bake for 30-40 minutes.