Have You Ever Tried Fava Beans?

Jack’s magic beans that grew overnight into a beanstalk were very probably fava beans or, as the English call them, broad beans. Americans, however, have been slow to appreciate this great tasting vegetable, even though, their flavor is smoother, sweeter and richer than most other beans.

But we may be undergoing a spring awakening.The pale green beans in the big floppy pods have been an early spring food in many countries for centuries. Favas — also known as Windsor beans, English beans, horse beans and pigeon beans — have long been a diet staple in Asia, the Middle East, South America, North Africa and Europe.

These ancient beans are one of the oldest cultivated plants and among the easiest to grow. They were the only beans Europeans ate before they discovered America and all its legumes. Explorers took American beans back to Europe and introduced the fava to America, which never really caught on.

After preparing them, you begin to understand why. This is a labor-intensive process. First, you string and shuck the beans, then parboil them so that the waxy coating can be removed. It is an afternoon event and, for Americans, not a great use of their time.

Unshelled, fresh favas look like giant, bumpy string beans. They are 5 to 7 inches long and lined with padding that looks like cotton batting. You don’t want to buy beans that are bulging out of the pod — which means they are probably old.

The beans have a buttery texture, a slight bitterness and a nutty flavor. Their fresh green color is a welcome sign of spring.

Fresh fava beans are purchased in the shell, so you’ll have to buy a lot more beans than you might think. One pound of un-peeled beans will give you roughly 1/3 cup of favas. 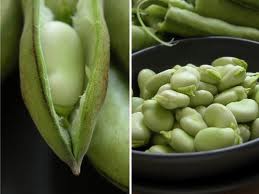 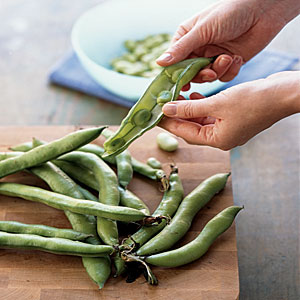 How to get to the bean:

Fava beans have been a staple of Mediterranean and Middle Eastern cuisines for centuries and they are used in appetizers, omelets, salads, soups, dips, pasta dishes and casseroles. Many home cooks like to add favas to minestrone soup and favas can sometimes substitute for garbanzos in falafel patties.

I am most familiar with dried favas, which are greenish-brown and large compared to most beans and flat with a distinctive slim black eye. I often use these because fresh fava beans are not easy to find.

When You Can’t Find Fresh

Fresh fava beans have a short season, but they’re available in other forms to enjoy all year long.

Peeled frozen beans can be used in place of fresh, with slightly increased cooking times (follow the directions on the label).

Many people are familiar with dried favas and they are often imported from Italy. These are excellent for soup.

Canned or bottled favas are available in most supermarkets, but these tend to be the least favorable way to enjoy these beans. Often, the tough outer skin has not been removed and the beans can be high in sodium. If you use canned or bottled beans, be sure to rinse, drain and peel them, if necessary.

Favas are nutrition superheroes. They are high in fiber and iron and low in sodium and fat. They have no cholesterol but are high in protein.

Fava beans are popular in Italy.

They are often served as a first course spring salad with young sheep’s cheese tossed with olive oil, lemon juice, parsley and a little hot pepper. Next on the menu: could be fresh favas quickly sauteed with seafood and herbs or cooked fava beans pureed with cream and butter. Fava beans can be served simply boiled, mashed and spread on crostini, or added to spring stews and soups. They are often paired with artichokes or other spring vegetables such as peas and morels (mushrooms).

Italians credit the fava bean as a factor in saving Sicilians from starvation. Since then, the fava has been considered good luck. The myth of the fava bean began during the famine in Sicily, where the beans were used as fodder for cattle. To survive, the farmers prepared them for the table. Hence, they considered themselves lucky to have them.

Fava beans play a large role in the Sicilian tradition of the St. Joseph Table. which is held in March to honor the saint. They may be served in a frittata or in garlic sauce during this celebration. When dried, roasted and blessed, they become the very popular “lucky bean.” Legend has it that you will never be broke as long as you carry one. Some people believe that if you keep one in the pantry, there will always be food in the kitchen. The bean is also a symbol of fertility, since it grows well even in poor, rocky soil. Italians would carry a bean from a good crop to ensure a good crop the following year.

Fava beans are a spring favorite in southern and central Italy. This salad, adapted from Patricia Wells’, Trattoria, (William Morrow 1993) is popular as a starter or as part of an antipasto spread. If you can only find a hard grating pecorino, use a soft goat cheese. If there are leftovers, saute the beans and cheese with a little oil in a small skillet. They are fragrant and delicious as a warm appetizer.
Makes 8 to 12 servings

Shell and parboil the beans as directed above in how to get at the bean.
In a medium bowl, combine all ingredients and toss to blend. Taste for seasoning. 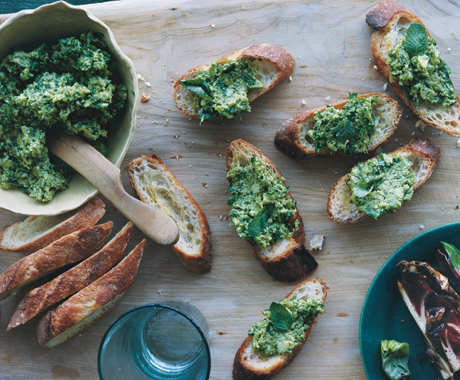 Preheat oven to 350°F with rack in middle.

Cook fava beans in boiling water, uncovered, until tender, 3 to 4 minutes, then drain and transfer to an ice bath to stop cooking. Gently peel off skins.

Cut 16 diagonal slices (1/3 inch thick) from baguette and put on a 4-sided sheet pan. Drizzle with remaining tablespoon oil. Bake until pale golden and crisp, 8 to 10 minutes. Rub with cut side of garlic.

Spoon fava-bean mixture onto baguette toasts, then drizzle with oil and top with mint.

Shrimp and Fava Beans with Thyme

Shell fava beans according to instructions above.

Heat oil and butter in skillet over moderate heat. Add ham and garlic and toss for a minute. Add shrimp, favas and thyme and toss just until shrimp turn pink.

Remove the beans from the pods, shell and pick off the little buds that appear on the side of the beans. (See photo above.)

Place the oil and onion in a large saucepan over low heat, cover, and cook for about 5 minutes, until the onion sweats.

Add the pancetta and saute for 8 to 10 minutes, until it begins to color. Add the water and bring to a boil. Add the beans and partially cover. Cook over medium-low heat for 30 to 40 minutes, until the beans are tender. The timing depends on the freshness of the beans.

When the favas are tender, stir in the pasta and cook until the texture is al dente, about 6-8 minutes or so, stirring now and then, to prevent the pasta from sticking together.

Remove from the heat, add basil, mint, parsley and salt and pepper to taste. Serve.

To make this soup using dried fava beans, bring the drained, soaked beans and 8 cups water to a boil in a soup kettle; simmer until the beans are tender, about 45 minutes. Drain, reserving the bean cooking liquid; cool the beans. Remove and discard the tough outer skin from the fava beans. Follow the recipe instructions, adding the cooked fava beans and 6 cups of the bean cooking liquid just after adding the pancetta. Bring to a boil, add the pasta and proceed with the recipe instructions. 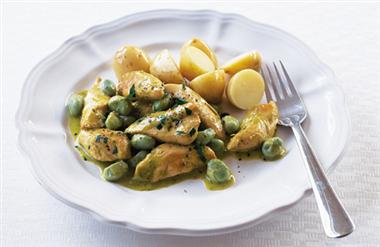 Bring a pot of water to a boil. Prepare a bowl of ice water. Immerse the fava beans in the boiling water for 1 to 2 minutes. Drain and plunge the beans into the ice water for 30 seconds to stop the cooking process. Drain. To remove the fibrous shells from the blanched fava beans, make an incision on one end of the shell with your fingernail, pop the bean out, and discard the shells. Set aside.

Place the chicken breasts, leeks and potatoes into a medium-size pot; add the stock, set over medium heat and bring to a simmer; cook, covered, for 15 to 20 minutes. Stir in the fava beans, parsley and oregano; continue to simmer for 2 to 3 minutes.

Remove the chicken from the broth and cut into thin slices. Place equal portions of chicken, beans, leeks and potatoes into 4 serving bowls, pour a little broth over all and drizzle 1 teaspoon lemon juice on each bowl. Garnish with oregano sprigs. Serve immediately.