Asparagus With An Italian Accent 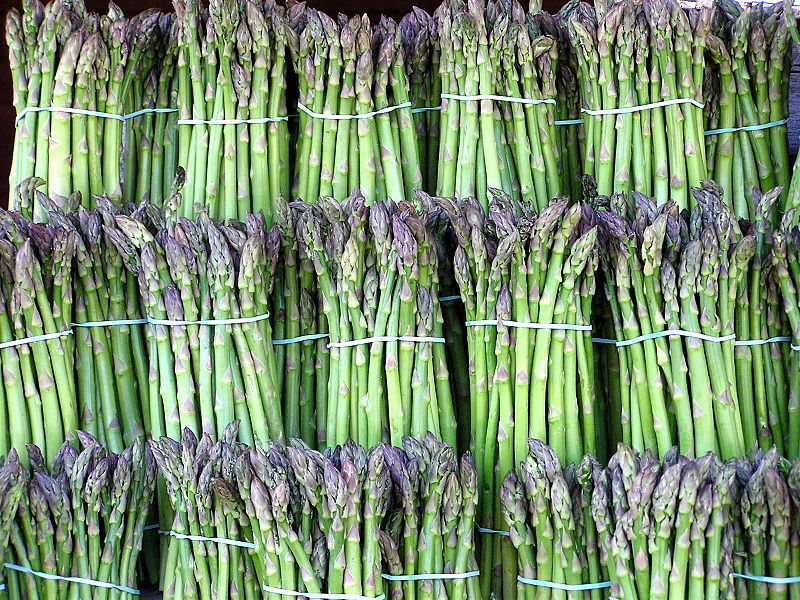 Asparagus season varies based on the climate in which it is grown, though it typically matures in early summer in the US northern latitudes and even earlier in southern states, like Texas. In tropical regions of the world, such as the state of Hawaii or warm Mediterranean climates like those of southern Italy and Greece, asparagus season is year round. The plant, however, only lasts 90 days per season, so crops need to be planted incrementally to receive a steady harvest throughout the year.

A member of the lily family, asparagus comes from the Greek word, asparagos, which first appeared in English print around 1000 A.D. It cannot be definitively traced to any one specific area of origin, although it is known to be native to the eastern Mediterranean and Asia Minor areas.

As early as 200 BC, Cato , a Roman statesman and author, gave excellent growing instructions for asparagus, in his work, De Agri Cultura. The ancient Egyptians cultivated asparagus and Romans, from Pliny to Julius Caesar to Augustus, prized the wild variety. “As quick as cooking asparagus” was an old Roman saying meaning something accomplished rapidly.

The asparagus growing beds in Northern Italy were famous during the Renaissance period. These graceful spears have always been a sign of elegance, and in times past, were a delicacy only the wealthy could afford. Roman emperors were so fond of asparagus, that they kept a special asparagus fleet for the purpose of fetching it. 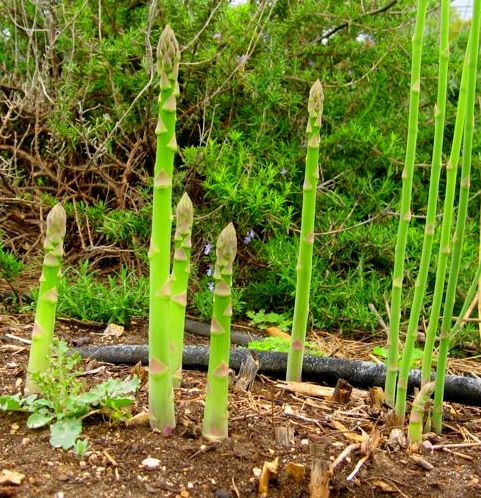 Asparagus spears grow from a crown planted in sandy soils and, under ideal conditions, can grow 10 inches in a 24-hour period. The most common types are green, but you might see two others in supermarkets and restaurants: white, which is more delicate and difficult to harvest, and purple, which is smaller and fruitier.

This large vegetable is one of the most nutritionally well-balanced vegetables — high in folic acid and a good source of potassium, fiber, thiamin and vitamins A, B6 and C.  A 5-ounce serving provides 60% of the RDA for folic acid and is low in calories. You can enjoy this vegetable raw or with minimal preparation.

Like all vegetables, asparagus doesn’t instantly “die” when it is picked but continues to engage in metabolic activity. This metabolic activity includes intake of oxygen, the breaking down of starches and sugars and the releasing of carbon dioxide. The speed at which these processes occur is typically referred to as “respiration rate.” Compared to most other vegetables, asparagus has a very high respiration rate. Asparagus’ very high respiration rate makes it more perishable than its other vegetables and also much more likely to lose water, wrinkle and harden. 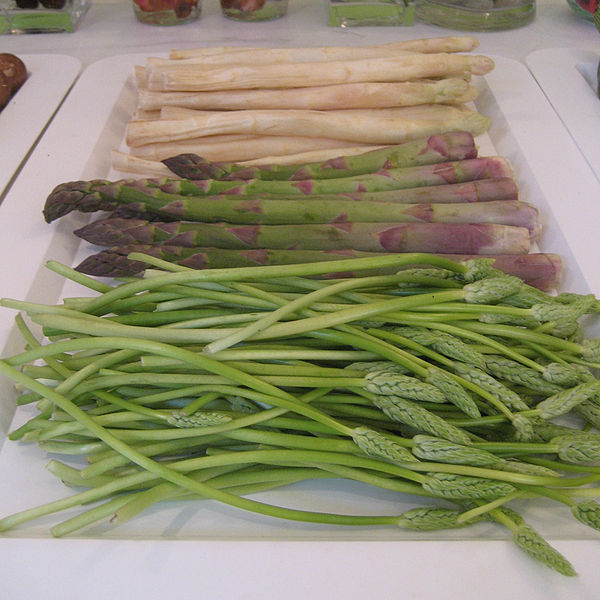 Three types of asparagus are pictured with white asparagus at the back and green asparagus in the middle. The plant at the front is wild asparagus.

Since asparagus varieties most commonly available in the U.S. are green in color, you are most likely to find these green-colored varieties in your grocery store.

Two other types of asparagus that are widely grown aside from the typical green variety are white asparagus and purple asparagus. These strains have the same asparagus season for harvesting and only differ in appearance and size.

White asparagus is produced by keeping the stems of the plant buried under mounds of dirt which prevents them from being infused with green chlorophyll from interaction with sunlight and gives the plants’ shoots a more mild and softer texture.

Purple asparagus was first grown in Italy and is a larger than normal strain with a sweeter taste. It is a hybrid plant where the spear edges of the stems are noticeably purple and is named Violetto d/Albenga after the Albenga north-western region of Italy situated along the Gulf of Genoa.

Asparagus stalks should be rounded and not twisted. Look for firm, thin stems with deep green or purplish closed tips. The cut ends should not be too woody, although a little woodiness at the base prevents the stalk from drying out. Once trimmed and cooked, asparagus loses about half its total weight. Use asparagus within a day or two after purchasing for best flavor and texture. Store in the refrigerator with the ends wrapped in a damp paper towel.

As asparagus grows almost everywhere in Italy there are many regional asparagus recipes. The spears can be boiled for a few minutes and served as a side dish with a splash of olive oil and lemon juice or added to an omelette. The tender tips have a delicate flavor and taste the best with as little cooking as possible.

To make a simple pasta dish: cut the asparagus shoots into medium length pieces and then saute them for 3-4 minutes along with some finely chopped garlic, pepperoncino (chilli pepper) and a few shavings of lemon zest. Pour this mixture over cooked spaghettini (a thinner variety of spaghetti) and sprinkle with pecorino-romano cheese. 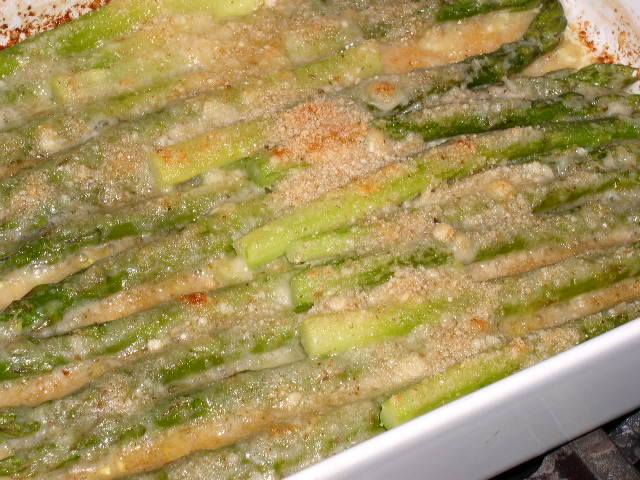 Roasting is an excellent way to prepare asparagus. Asparagi alla parmigiana is a springtime favorite in northern Italy.

Preheat oven to 450°F. Oil a shallow baking dish that is just large enough to hold the asparagus. Place a layer of asparagus in the dish with the tips all facing the same direction. Sprinkle with a little salt and pepper and some of the cheese. Keep adding layers until all asparagus and all cheese is used, finishing with the cheese.

Drizzle with olive oil and place the dish on the top rack of the oven. Bake for about 15-20 minutes, or until the asparagus is cooked through and beginning to brown and the cheese is melted.

In the same skillet add the olive oil and cook the peppers until they soften. Transfer to the bowl with the asparagus.

In the same skillet, cook the sausage until it is no longer pink. Cool.

Pat the dough into a large pizza pan. Spread the sausage over the dough.

Spread the asparagus and peppers over the sausage. Sprinkle the provolone over all.

Bake until the crust is brown and the cheese has melted. Slice and serve. 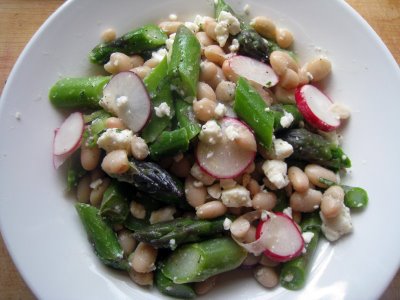 Pour dressing over asparagus mixture and toss gently to coat. 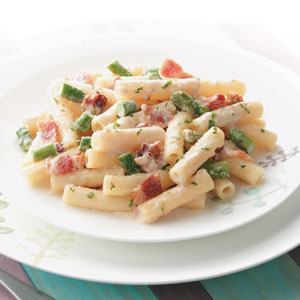 Rigatoni with Bacon and Asparagus

Cook pasta according to package directions. (Cook asparagus with pasta during the last 3 min.) Drain.

In the same pan, cook bacon over medium heat until crisp. Remove to paper towels to drain. Crumble bacon and set aside. Drain fat from pan.

Add butter and oil to the pan and heat. Saute garlic briefly. Stir in cream.

Bring to a boil. Reduce heat; simmer, uncovered, for 3-4 minutes or until slightly thickened.

Stir in mozzarella cheese until melted. Add drained pasta and asparagus. Stir in the salt, parsley and reserved bacon. Sprinkle with pepper and Parmigiano-Reggiano cheese.

The lasagna takes some time to make, but it can be prepared the day before you entertain. It keeps very well for a day or two in the refrigerator before you bake it.

Bring the water back to a boil and add the asparagus stalks. Boil thick asparagus stalks for five minutes or medium and thin stalks for three minutes. Transfer them, using a spider or tongs, to a bowl of ice water. Do not drain the cooking water.

Allow the asparagus to cool for a few minutes, then drain and dry on a clean kitchen towel. Cut the asparagus into 1-inch lengths. Set aside.

Make the bechamel sauce according to directions below.

Whisk 1/2 cup of the cooking water from the asparagus into the béchamel, along with 1/4 cup of the Parmesan cheese and the herbs. Add freshly ground pepper to taste and adjust salt.

Oil or butter a 3-quart baking dish or lasagna dish.

Bring the asparagus cooking water back to a rolling boil and drop in 3 lasagna noodles. Boil just until the pasta is flexible (about three minutes for no-boil lasagna). Using tongs, transfer the pasta to drain on a clean dish towel.

Set aside 1/3 cup of the bechamel sauce for the top of the lasagna and spread a very thin layer of bechamel over the bottom of the baking dish. Cover with the just parboiled pasta noodles.

Stir the asparagus into the remaining bechamel and spread a layer over the noodles. Sprinkle on 2 tablespoons Parmesan.

Parboil another layer’s worth of pasta, top with the asparagus bechamel sauce and with another 2 tablespoons of Parmesan.

Repeat with one more layer. End with a layer of pasta and spread the 1/3 cup reserved bechamel sauce over the top and sprinkle on the remaining Parmesan.

Cover tightly with plastic, if storing in the refrigerator.

Preheat the oven to 350 degrees F. Drizzle 1 tablespoon of olive oil over the lasagna and cover tightly with foil. Bake for 30 minutes until bubbling. Uncover and continue to bake until the top just begins to color, about 10 minutes. Remove from the ocen. Allow the lasagna to sit five to 10 minutes before serving.

Make Ahead: You can prepare this dish up to a day or two before you bake it. Don’t drizzle on the last tablespoon of olive oil until you’re ready to bake. Wrap tightly in plastic and refrigerate. Remove the plastic and replace with foil before baking.

The main thing to watch for here is scorching. Stir often with a rubber spatula, especially at the bottom and edges of the pan, so that the mixture doesn’t stick and begin to burn. If it does, immediately pour the sauce into another pot and continue to cook over very low heat.

Heat the oil over medium heat in a heavy medium saucepan. Add the shallot and cook, stirring, until softened, about three minutes. Stir in flour and cook, stirring, for about three minutes until smooth and bubbling but not browned. The paste should have the texture of wet sand. Whisk in the milk all at once and bring to a simmer, whisking all the while.

Turn the heat to very low and simmer, stirring often with a whisk and scraping the bottom and edges of the pan with a rubber spatula, for about 10 minutes or until the sauce thickens. Season with salt and pepper.

Variation: Substitute vegetable stock for the milk for a vegan version of this sauce.