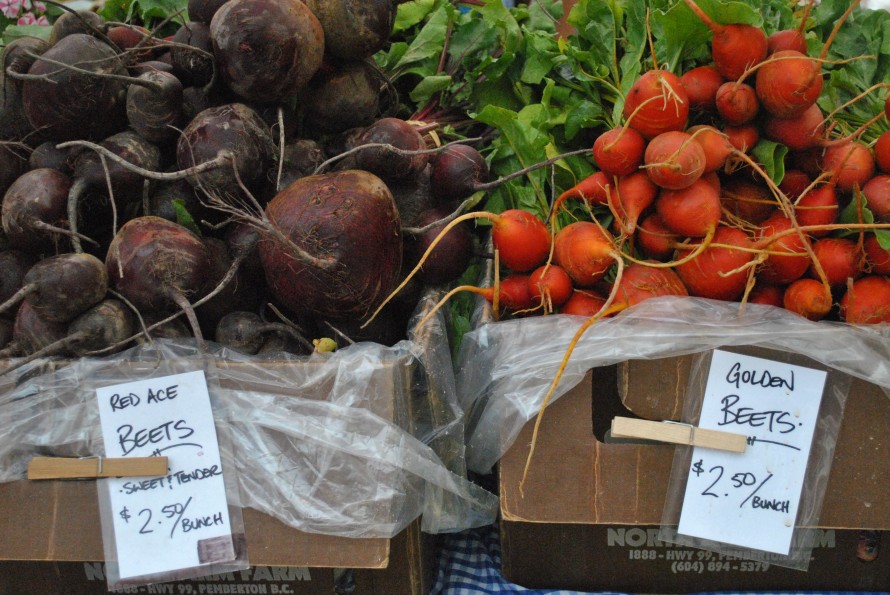 The wild beet, the ancestor of the beet with which we are familiar today, is thought to have originated in prehistoric times in North Africa and grew wild along Asian and European seashores. In earlier times, people ate the beet greens and not the roots. The ancient Romans were one of the first civilizations to cultivate beets and to use the roots as food. The tribes that invaded Rome were responsible for spreading beets throughout northern Europe, where they were first used for animal fodder and later for human consumption.

The medicinal properties of the root were more important than its eating qualities and it was used to treat a range of ailments including fevers, constipation, wounds and various skin problems. At that time, the roots were long and thin like a carrot. The rounded root shape, that we are familiar with today, was not developed until the sixteenth century and became widely popular in Central and Eastern Europe 200 years later. Many classic beetroot dishes originated in this region, including the famous beetroot soup known as borscht.

The value of the beet grew in the 19th. century, when it was discovered that they were a concentrated source of sugar. When access to sugar cane was difficult to get, beets became the primary source of sugar. Around the same time, beets were also brought to the United States, where they flourished. Today, the leading commercial producers of beets include the United States, Russia, France, Poland, France and Germany.

You don’t hear much about beets, though. People rarely serve them. As a matter of fact, in the world of vegetables, beets are seldom even mentioned. Hopefully, after reading this post, you will be more inclined to try this vegetable.

Beets are low in calories but have a high sugar content when compared with all other vegetables. Beets also serve as a natural coloring agent in cooking. Try using pureed beets in a Red Velvet Cake recipe, instead of red dye. Beets are most often used in salads and soups or pickled.

Beets, also known as beetroot, are high in potassium, folate and fiber. Their edible leaves offer protein, calcium, beta carotene, vitamins A, C and some B vitamins. They are also a rich source of carotenoids and lutein/zeaxanthin and they contain magnesium, iron, copper and phosphorus. Beets are a source of beneficial flavonoids called anthycyanins. The beetroot fibers help in reducing cholesterol and triglycerides by increasing the level of HDL. Consumption of beets also helps to prevent cardiovascular diseases.

Red beets are the beets most of us think of when our minds turn to “beets.” Look for beets with their fresh, leafy greens still attached, if possible – then you’ll know they are fresh. The great thing about red beets, however, is that they are great storage vegetables. Getting a bit less tender as they are stored, perhaps, but also gaining sweetness along the way.

Golden beets are a bit less sweet than red beets, but also have a more mellow, less earthy flavor all around. If nothing else, golden beets add a bright, zesty yellow color when served roasted or in salads.

Chioggia beets are naturally striped – some are a subtle yellow-and-orange combination, while others come with a brilliant red-and-cream candy cane effect. Use them as you would other beets and know that the striping often fades when cooked.

Any beet can be sold as a “baby beet.” They are simply the beets that are pulled to thin the field and make room for other beets to grow. Smart farmers sell these small specimens as a specialty item. They are very tender and tend to have beautiful, fresh greens.

White beets lack the earthy, strong beet flavor that colored beets embody. They also lack the red and yellow pigments that colored varieties possess. What Baby White beets do have is a high level of sweetness. The beets are comprised of a round tapered white root with pale green shoulders, crunchy midribs and wavy broad green leaves.

How to Cook Beets:

To roast beets (the most flavorful method): Trim the greens off the beets to within 1 inch and scrub the beets. (Reserve the greens for another use, such as the Sauteed Beet Greens recipe below.) Arrange the beets in a small roasting pan, add 1/8 inch water, and cover loosely with foil. Roast at 450 degrees F. for 30 to 45 minutes, until they are tender when pierced with a knife.

To boil beets: Place in a saucepan with 2 inches of cold water to cover. Bring to a boil and cook until tender, about 30 minutes for baby beets to 1 hour for large ones.

To microwave beets: Place in a microwave-safe dish with 1/4 cup of water; cover. Microwave on high 10 to 15 minutes until tender.

When cool enough to handle, peel the beets: Cut off the stem and root ends and scrape the thin layer of skin off with a knife. I wear latex gloves and put a piece of parchment on the cutting board to reduce staining.

The Chioggia beet is an Italian heirloom variety established circa 1840. It was named for the town in which it was first cultivated, the island fishing village of Chioggia, near the Lagoon of Venice. Chioggia beets grow best in a cool climate, though they can tolerate some heat. They should be well weeded though, as beets that fight weeds for growing space, can become woody and stringy.

The Chioggia beet can be roasted, steamed or braised. Roasting the beet will bring out the most flavor. Chioggia beets can be served raw, cold or hot. They are a great salad beet, whether served alongside greens or as the main ingredient. Chioggia beets pair well with other beets, bacon, apples, butter, cheeses such as, goat, gorgonzola or aged pecorino-romano, cucumbers, creme fraiche, hard-coked eggs, fennel, mustard, oranges, parsley, smoked fish, shallots and vinegars, especially balsamic, sherry and red wine. Chioggia beets can also be preserved by pickling them. 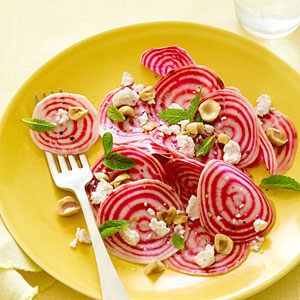 Use a mandoline, if you have one, to slice the beets super thin.

Whisk together lemon juice, oil, salt, and pepper in a large bowl. Add beets and toss to coat evenly. Sprinkle with remaining ingredients. 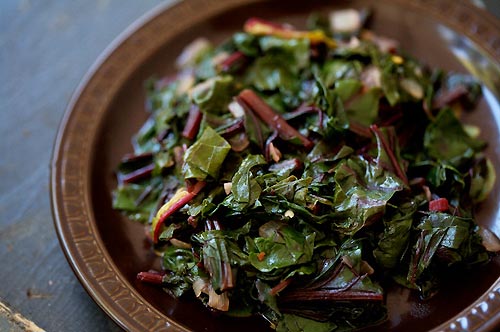 This is a good side for grilled flank steak.

Wash 1 bunch of beet leaves very well. Do not use any discolored leaves which can appear yellow. You want the deep green leaves. You can keep the stems too.

Chop the leaves and stems and set aside.

Crush 2 cloves of garlic and saute the garlic in 2 tablespoons extra virgin olive oil, for about 3 minutes over medium heat, in a pan that will be large enough to hold the leaves. Do not let the garlic burn, this will ruin the whole dish.

Next add the beet leaves along with 1/4 cup water. The water will help create steam for cooking the greens.

Lower the heat to low. Cover the pan and cook until the leaves are wilted and soft, stirring frequently. Add additional water as needed to prevent leaves from sticking to pan.

This dish can be served as a side dish with Italian-style breaded chicken breasts. 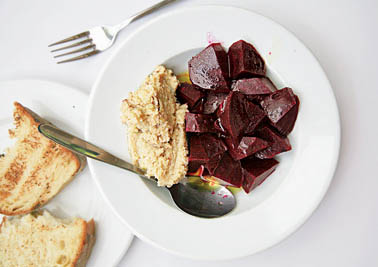 Heat oven to 425°F. Put beets in an 8″ x 8″baking dish and drizzle with 2 tablespoons oil. Season with salt and pepper and pour in 1 cup water. Cover pan tightly with foil and crimp edges to form a seal. Bake beets until a knife inserted into beet slides easily into the center, about 1 hour. Transfer pan to a rack, carefully uncover, and let cool for 30 minutes. Peel beets and cut into 1″–2″pieces; set aside.

Put walnuts, vinegar, garlic and potatoes into a medium bowl and mash until the potatoes are smooth. Vigorously stir in remaining oil and season with salt and pepper. Transfer beets to plates and serve with some of the potato spread on the side. 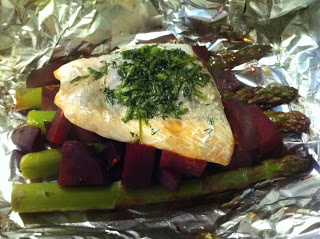 Serve with baked salmon fillets (if desired) seasoned with Italian herbs (instructions below).

Sprinkle kosher salt on a cookie sheet large enough to hold the beets and place the unpeeled beets on the salt. Place in the oven and cook for 45 minutes. Meanwhile, cut off the woody bottom inch of the asparagus and set aside.

If baking salmon to go with this dish, do not turn off the oven. Place the salmon in an oiled baking dish, top with chopped fresh herbs, and place the dish in the oven for about 15 minutes while you prepare the beets.

Allow the beets to cool 5 minutes and then peel them. Cut the peeled beets into 1/4-inch dice and place in a kitchen bowl. Drizzle with 2 tablespoons olive oil and season them with salt and pepper.

Arrange the beets over the asparagus and shave Parmigiano-Reggiano cheese over the vegetables. Place the salmon on top if using. 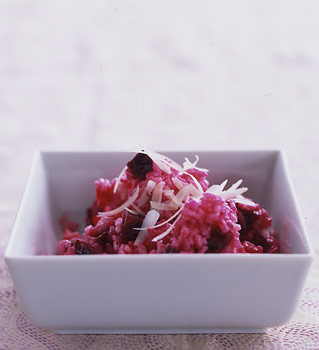 Tightly wrap beets in a double layer of foil and roast on a baking sheet until very tender, 1 1/4 to 1 1/2 hours. Cool in the foil package, about 20 minutes.

When beets are cool enough to handle, peel them, discarding stems and root ends, then cut into 1/2-inch cubes.

Cook onion in oil in a wide 4- to 6-quart heavy pot over moderate heat, stirring occasionally, until softened, about 3 minutes. Add garlic and rice and cook, stirring constantly, 1 minute.

Stir in beets, salt and pepper (mixture will turn bright pink) and cook, stirring, until heated through. Thin as necessary with some leftover broth, then stir in cheese and remove from heat.