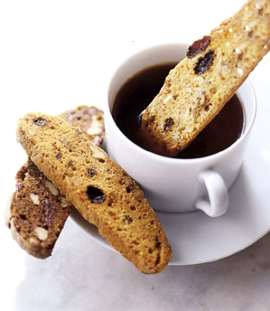 As noted, Italians call biscotti cantucci and use the term biscotti to refer to any type of crunchy cookie, round, square or otherwise—as the British use the word biscuit. In North America, we use biscotti as the ancient Romans did, to describe a long, dry, hard, twice-baked cookie (in other words, cantucci).

Biscotti have been baked for centuries. It was the perfect food for sailors who were at sea for months at a time. The biscuits were thoroughly baked to draw out moisture, becoming a cracker-like food that was resistant to mold. Biscotti were a favorite of Christopher Columbus who relied on them on his long sea voyages.

Biscotti are eaten and enjoyed in many ways! Italians favor them as “dipping cookies” either in a cup of espresso or cappuccino or in a special Italian wine known as Vin Santo. They are enjoyed as a breakfast biscuit with coffee or as a dessert along side a dish of Gelato or Spumoni and, of course, biscotti can be savored as a subtly sweet crispy snack all by themselves!

Though modern biscotti are associated with the Tuscan region of Italy, the popular Italian cookie traces its origins to Roman times. The word biscotto derives from “bis,” Latin for twice, and “coctum” or baked (which became cotto or cooked). The Roman biscotti were more about convenience food for travelers rather than a pleasurable treat for leisurely dinners. Unleavened, finger-shaped wafers were first baked, then baked a second time to completely dry them out, making them durable for travel and nourishment for the long journeys—Pliny, a Roman philosopher and author, boasted that they would be edible for centuries. Biscotti were a staple of the diet of the Roman Legions.

After the fall of the Roman Empire in 455 C.E, the country was repeatedly sacked by the Visigoths, the Vandals and others. The people did their best to survive but there was no culinary development. With the progression of the Renaissance, cuisine also flowered. Biscotti re-emerged in Tuscany, credited to a Tuscan baker who served them with the local sweet wine. Their dry, crunchy texture was seen to be the perfect medium to soak up the wine. Centuries later, many still agree that dipping biscotti into Vin Santo is a perfect way to end a meal or to while away an hour at a café. Tuscan biscotti were flavored with almonds from the plentiful almond groves of Prato.  Cantucci di Prato can be found in the window of every pasticceria in Tuscany.

Cantucci became a staple in the Tuscan cities of Florence and Prato, and spread throughout the Italian peninsula. As the Roman Legions had appreciated their long storage ability, so did the soldiers, sailors and fisherman of the Renaissance. But now, rather than pallid, dry staples for nourishment, Italian bakers put their culinary gifts to work. Biscotti became so popular that every province developed its own flavored version.

Not only are biscotti delicious to eat but they have inspired some artists to use them in their works of art. Barbara Melnick Carson recently visited Tuscany and wrote about her experiences on her blog. She discovered such art in her travels. You can read some of her creative posts at http://barbaramelnikcarson.com/

You can also view her photos of biscotti used as art in the post, The Art of Pastry.

She shared some of her photos with me and I am including them in this post, just below.

Dress Made With Biscotti

Antonio Mattei opened his almond biscuit business in the center of Prato in 1858. It is still operating at that same location at Via Riscasoli, 20, not far from the Duomo

From the almond recipe of Tuscany, the recipe expanded to lemon-flavored dough and to other flavors and spices; to biscotti with raisins and other dried fruits; to biscotti studded with chocolate morsels and a variety of nuts. Today, the flavorings are only limited to the imagination of the baker and the palates of the customer.

Most European countries have adopted their own version of biscotti. the British have rusks; the French biscotte and croquets de carcassonne; Germans zwieback; Greeks biskota and paxemadia; Jews mandelbrot; and Russians sukhariki.

Biscotti range in texture from very hard to somewhat spongy and more cake-like. First, the sticky dough is shaped into a log and baked until firm. After a short cooling period, the log is sliced into diagonal pieces and baked again to cook out the moisture and produce the crisp, dry-textured cookie with a longer shelf life. The classic recipe has no butter or oil, using only eggs to bind the ingredients together. Recipes that do use butter or oil have a softer texture and a shorter shelf life.

Here is the Classic Biscotti Recipe: 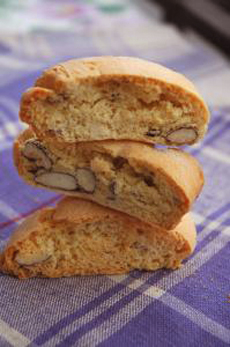 In a medium-sized mixing bowl, whisk together the flour, baking powder and salt and set aside.

In a large bowl, beat together the eggs, egg yolks and sugar until light, about 2 minutes; the mixture will look somewhat curdled.

Beat in the vanilla, anisette or amaretto and anise seed. Beat in the dry ingredients, then the chopped nuts.

Divide the dough into four portions. On a lightly floured board, shape each portion into a flat log, just about the length the cookie sheet. Place two rolls on each cookie sheet.

In a small bowl, beat the egg white with a fork until frothy. With a pastry brush, glaze each log with some egg white and sprinkle with granulated sugar.

Bake for 15 to 20 minutes, or until the logs are lightly golden brown, firm to the touch and just beginning to crack slightly.

Allow the logs to cool on the cookie sheet about 20 minutes.

Reduce the oven temperature to 200°F.  With a serrated knife slice the biscotti on the bias into ½-inch slices. Lay the slices on the cookie sheets in a single layer; Return the biscotti to the oven and cook for 20 more minutes, turning over halfway through the baking time or until the biscotti are toasted and crisp

Store the biscotti in an airtight container. They will keep for 2-3 weeks. 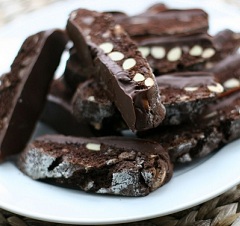 This double chocolate biscotti recipe gets its chocolate flavor from cocoa powder in the dough and the addition of chocolate chips.

Position one of your oven racks in the center of your oven. Preheat oven to 350 degrees F. Line a baking sheet with parchment paper or a nonstick baking liner and set aside.

In a large bowl sift together the flour, cocoa powder, baking soda, and salt and stir in the sugar. Make a well in the middle of the dry mix. Combine two of the whole eggs, the egg yolks, and vanilla in a small bowl and mix into the dry mixture until just combined. Add the nuts and chocolate chips and mix until incorporated.

After mixing, scrape the dough out onto a lightly floured work surface.  Briefly knead the dough, just until it comes together, and divide it in half. Shape each half into a 2 1/2 inch by 12 inch flat log. The dough will be sticky so you may need to add more flour to your hands as you go along to accomplish this.

Carefully transfer the logs onto your prepared baking sheet, spacing them at least 3 inches apart because they will spread as they bake.

Beat the remaining whole egg and brush it over the logs.

Place the baking sheet on the center rack of your oven and bake for about 35 minutes, or until the logs are firm to the touch.

Place the baking sheet on a wire rack and allow the logs to cool for 10-15 minutes.

Lower the oven temperature to 325 degrees F. Transfer the logs to a cutting board, discarding the parchment paper. Using a serrated knife, cut the logs on the diagonal into 1-inch thick slices. Place the slices on the baking sheet cut side down.

Bake the biscotti until they are crisp, about 10 to 15 minutes turning halfway thorough baking.

Remove the biscotti from baking sheet and place on a wire rack to allow cool completely.

Variations: Feel free to experiment with the recipe:

Double Chocolate Biscotti with Orange, add 1 teaspoon grated orange zest to the dough when you add the vanilla.

Triple Chocolate Dipped, melt 12 ounces of your favorite chopped dark or white chocolate. Place it in a narrow heatproof container then dip half of each biscotti slice into the chocolate.

Place them on a wax paper lined cookie sheet and place the sheet into the refrigerator for 10-15 minutes to harden. 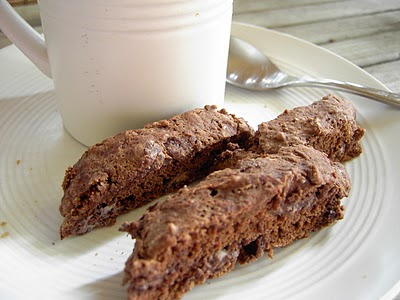 Preheat oven to 300 degrees F. Line a cookie sheet with parchment paper and set aside.

In a food processor, add the flours, cocoa powder, baking soda, salt and coffee crystals and pulse to combine. About six pulses.

Next, in a medium mixing bowl, combine the Egg Replacer with water, oil, then add the sugar and vanilla extract to this. Mix well.

Next, add the flour mixture and chocolate chips to this sugar mixture. Gently mix the dough. The dough will be wet and heavy with a few lumps. Just be careful to NOT overwork the dough.

Gently lift the dough up out of the bowl and turn it out onto the parchment lined cookie sheet. Divide the dough in half and shape into two long logs. About ten inches long and three inches wide.

Don’t bother flattening the logs out–they will flatten as they bake and take on the domed look of biscotti.

On lowest rack in the oven, bake biscotti logs for about 30 minutes. Remove from oven and allow to cool for about fifteen minutes.

Slice logs into 1/2 inch pieces with a serrated knife. Separate the pieces a bit so the air circulates around them on the baking sheet.

Bake for a second time for 20 minutes. (A bit longer if you want crunchy biscotti.) Remove from the oven. Allow to cool completely before storing. Can be stored in airtight container for several weeks. 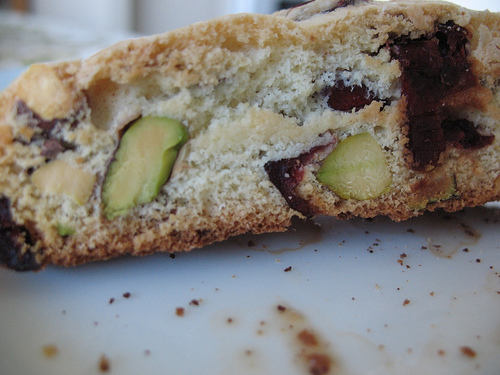 Preheat the oven to 300 degrees F

Mix together oil and sugar until well blended.

Mix in the almond extract, next beat in the eggs.

In another bowl combine flour, salt and baking powder – gradually stir this into the egg mixture.

Mix in cranberries and nuts by hand.

Bake for 35 minutes in the preheated oven.

Remove from oven and set aside to cool for 10 minutes.

Cut logs on diagonal into 3/4 inch thick slices. Lay the slices on their sides on the cookie sheet.

Bake for 20 to 25 minutes turning halfway through the baking time.

Cool on cookie sheet for 5 minutes, then carefully transfer to a wire rack to cool.

Store in an airtight container.