Look for these winter vegetables at farmers’ markets (if you’re lucky enough to have year-round markets near you) and in produce departments for the best flavor and greatest value in season. Specific crops and harvest dates will depend on your region’s climate and most of these are only available locally in temperate regions.

Beets are in season in temperate climates fall through spring, and available from storage most of the year everywhere else. Fresh beets are often sold with their greens still attached

Belgian Endive are mostly “forced” to grow in artificial conditions, and are available year-round. Their traditional season (when grown in fields and covered with sand to keep out the light), is late fall and winter.

Broccoli, like many cruciferous vegetables, can be grown year-round in temperate climates, so we’ve forgotten it even has a season. But, like the rest of its family, it tastes best (that is, more sweet, less bitter and sharp) when harvested in the cooler temperatures of fall in most climates.

Brussels Sprouts grow on a stalk, and if you see them for sale that way snap them up – they’ll last quite a bit longer.

Cabbage is bright and crisp when raw and mellows and sweetens the longer it’s cooked. The cooler the weather it grows in, the sweeter it tends to taste (this effect is called “frost kissed”)

Carrots are available from winter storage from local growers in many areas, and fresh in warmer and temperate regions.

Celeriac/celery root is at its best in the cooler months of fall, winter, and early spring (except in cold climates, where you’ll find it during the summer and early fall).

Celery is at its best in the fall, with its harvest continuing through winter in warm and temperate climates.

Chicories are cool weather crops that come into season in late fall (and last in temperate climates through early spring).

Curly Endive (Frisée) is a chicory at its best in fall and winter.

Escarole is another bitter chicory in season fall and winter.

Herbs from hothouses in cooler climates.

Horseradish is at its best in fall and winter. Like so many other root vegetables, however, it stores well and is often available well into spring.

Jerusalem Artichokes/sunchokes are brown nubs, that look a bit like small pieces of fresh ginger. Look for firm tubers with smooth, tan skins in fall and winter.

Kale is like all hearty cooking greens – cooler weather keeps it sweet.

Kohlrabi comes into season by the end of fall, but stays sweet into winter.

Parsnips look like white carrots and have a great nutty flavor. Look for thinner parsnips, since fatter ones tend to have a thick, woody core you need to cut out.

Radicchio, like all chicories, radicchio is more sweet and less bitter when the weather is cool.

Rutabagas also known as “yellow turnips” and “Swedes” are a sweet, nutty root vegetable perfect in stews, roasted, or mashed.

Sweet Potatoes are often sold as “yams.” They store very well and are available year-round.

Turnips have a sharp but bright and sweet flavor. Look for turnips that feel heavy for their size. 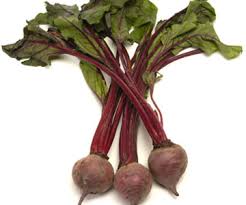 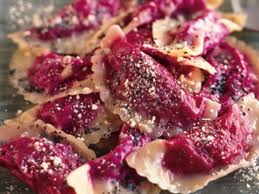 If you don’t have time to make fresh pasta, use purchased wonton wrappers.

Sprinkle 2 smooth kitchen towels with flour. Place 8 pasta rounds on work surface, keeping remaining dough covered with plastic. Place small bowl of water next to work surface. Spoon 1 teaspoon beet filling onto half of each round. Dip fingertip into water and dampen edge of 1 round. Fold dough over filling, pushing out as much air as possible and pressing edges firmly to seal. Transfer to prepared towels. Repeat with remaining rounds.

DO AHEAD: Can be prepared 1 week ahead. Transfer to rimmed baking sheet and place in freezer until frozen solid, about 6 hours. Transfer ravioli to resealable plastic bags.

The flavor, color, and texture of roasted fresh beets is incomparable, so don’t use canned beets. When choosing beets, select bunches with bright, glossy leaves attached.

You can also cut ravioli from the store bought sheets of fresh pasta dough.

Place flour in processor. Add eggs. Using on/off turns, blend until clumps of moist dough form (do not process into a ball). Turn dough out onto lightly floured work surface; shape into ball. Knead until smooth, sprinkling lightly with flour if sticking, about 3 minutes. Wrap in plastic. Let rest at room temperature at least 20 minutes and up to 2 hours. 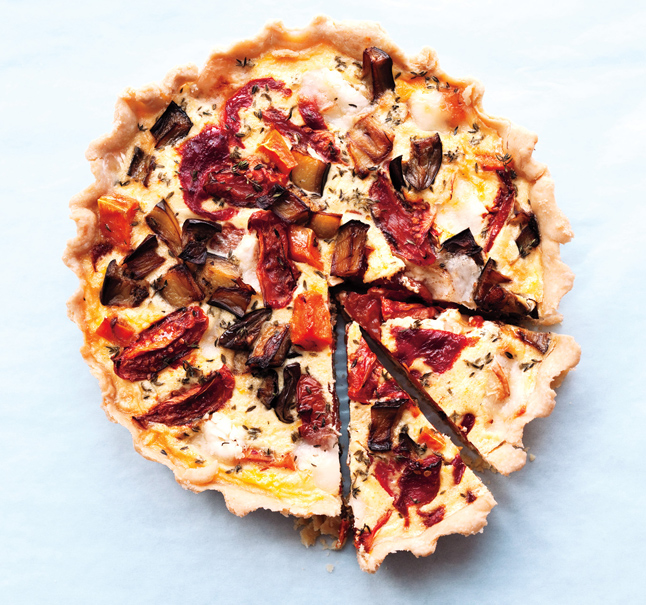 Preheat oven to 350°F. Roll out dough on a lightly floured surface into a 13″ round. Transfer to a 9 inch pie dish; press onto bottom and up sides of dish. Fold overhang under; crimp edges. Freeze for 10 minutes.

DO AHEAD: Can be made 1 day ahead. Store airtight at room temperature.

Arrange oven racks in upper and lower thirds of oven; preheat to 450°F.  Using a small paring knife, cut around stems of bell peppers. Lift out stems with seeds and discard. Transfer whole peppers to a small baking dish; drizzle with 1 tablespoon oil. Roast on upper rack, turning peppers occasionally, until tender, about 40 minutes. Transfer peppers to a small bowl; cover with plastic wrap. Let stand for 15 minutes. Peel peppers, then cut into strips. Set aside.

At the same time, toss eggplant with 1 tablespoon oil in a small bowl to coat. Season with salt and pepper. Spread out in a single layer on a rimmed baking sheet and roast on lower rack for 10 minutes. Add sweet potato to eggplant and mix gently. Continue roasting until eggplant and sweet potato are tender, 20–25 minutes longer. Set vegetables aside.

Line another rimmed baking sheet with parchment paper. Toss tomatoes with vinegar, 1 tablespoon oil, and a pinch of salt and pepper in a medium bowl. Arrange tomatoes, skin side down, on prepared sheet. Roast on lower rack until tomatoes are beginning to brown and are tender but not mushy, about 20 minutes. Set aside.

DO AHEAD: Vegetables can be prepared 1 day ahead. Cover separately and chill.

Whisk eggs and half & half in a small bowl; season lightly with salt and pepper. Slowly pour egg mixture over vegetables. Scatter remaining 1 teaspoon thyme on top.

Place tart pan on a baking sheet and bake tart until filling is set, 50–60 minutes. Let stand for at least 10 minutes. Serve warm or at room temperature. 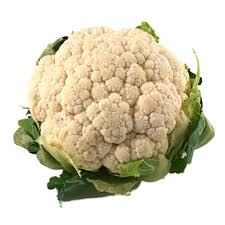 The secret behind this Sicilian-inspired dish: crunchy homemade breadcrumbs. 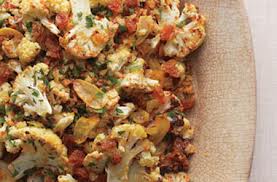 To make your own, let cubes of Italian bread dry out, then process them into coarse crumbs in a food processor.

Preheat oven to 425°F.  Toss cauliflower florets with 2 tablespoons olive oil in a large bowl; season mixture with salt and pepper. Divide cauliflower mixture between 2 large rimmed baking sheets, spreading out in a single layer. Roast, tossing occasionally, until cauliflower is golden and crispy, about 45 minutes.

DO AHEAD: Cauliflower can be made 4 hours ahead. Let stand at room temperature. Reheat before using.

Meanwhile, heat remaining 1 tablespoon olive oil in a medium saucepan over medium-low heat. Add garlic and cook, stirring occasionally, until just golden, 5–6 minutes. Add capers and cook until they start to pop, about 3 minutes longer. Add breadcrumbs and toss to coat. Cook, stirring often, until breadcrumbs are golden, 2–3 minutes; transfer breadcrumb mixture to a plate and set aside.

Add chicken broth and anchovy paste to same saucepan. Bring to a boil. Add golden raisins and white wine vinegar and cook until half the liquid is absorbed, about 5 minutes. Remove from heat and set aside. Do ahead: Breadcrumb and raisin mixtures can be made 2 hours ahead. Rewarm raisin mixture before continuing.

Transfer warm cauliflower to a serving bowl. Scatter raisin mixture over, then toss to distribute evenly. Season to taste with salt and pepper. Sprinkle cauliflower with breadcrumb mixture and parsley.

Wilted Escarole with Prosciutto and Chilies 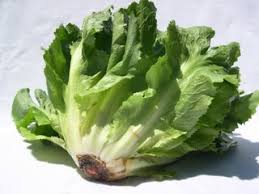 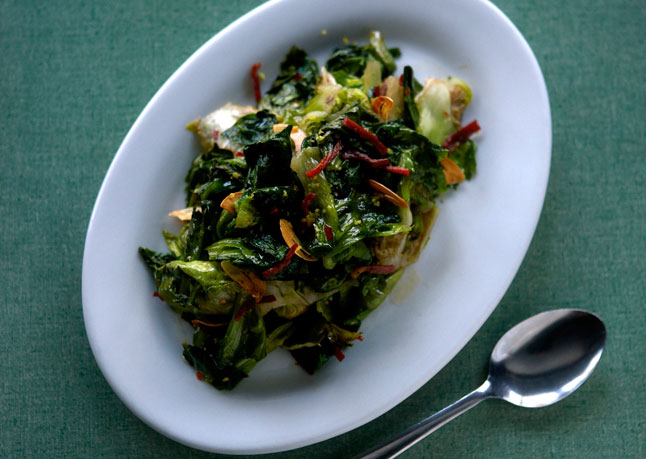 Working over a small bowl, finely grate enough zest from lemon to measure 2 teaspoons. Cut lemon in half; squeeze juice into another small bowl. Set zest and juice aside.

Heat oil in a large skillet over medium heat. Add garlic and cook, stirring often, until garlic is beginning to turn golden at edges, about 2 minutes. Add prosciutto and cook, spreading with tongs to keep pieces from sticking together, until crisp, about 2 minutes. Add red pepper flakes; stir for 30 seconds, then add escarole. Cook, tossing escarole, until wilted but not overcooked, 3–5 minutes. Season with salt and pepper.