The Cuisine Of Italy – Taranto 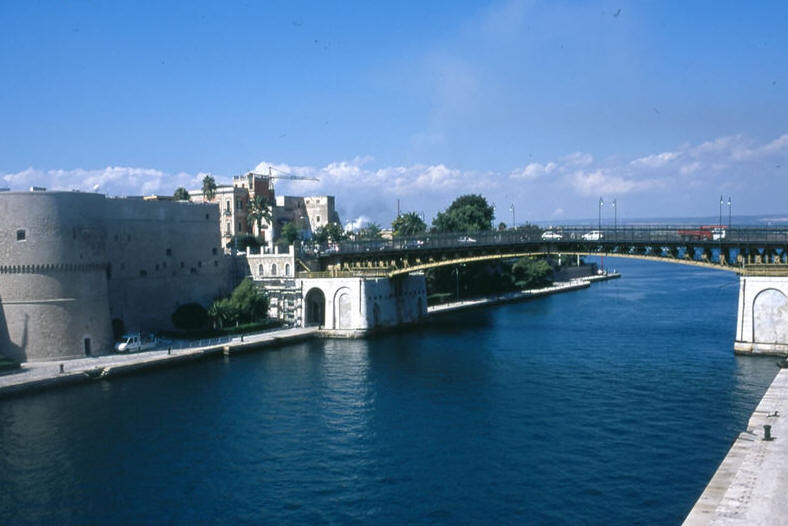 The Castello and Swing Bridge
in Taranto

The province of Taranto is found in the Puglia region of Italy, which is the region that forms part of the heel of Italy’s boot. The region of Puglia is divided into five provinces (Bari, Brindisi, Foggia, Lecce, and Taranto) and includes the two island groups of Tremiti and Cheradi. The weather is typically hot and dry. The beaches on the coast of the Ionian Sea offer plenty of places to sunbathe, swim, and snorkel. 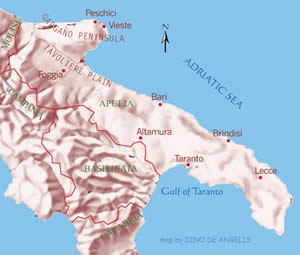 One of the charming and beautiful geographical features of Taranto is where three sides of land face inwards on the Mar Grande, the Mar Piccolo, and the Ionian Sea. The Citta nuova (New City) is located inland and is linked to the Isola della Citta Vecchia (Old City) by the Ponte Girevole and di Pietra Bridge. 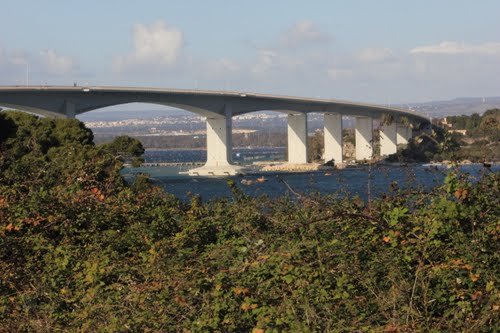 Taranto is one of Italy’s oldest and most beautiful port cities. It may be the city of two seas, but it is also the city with two faces, because beyond the bridge, progress has redesigned the new Taranto, a city developed around a 19th. century village, facing the waterway. Housed in the former Convent of San Pasquale Alcantarini, the National Archaeological Museum is famous for its rich collection of rare finds.

The sea, though beautiful, is not the only attraction here. An extraordinary landscape makes up the beautiful countryside of Taranto: sometimes green and lush with large vineyards and olive groves and sometimes rocky and rough with ravines, caves and gorges where ancient civilizations settled.

Remarkable also is the presence of prehistoric ruins, including the Village of Triglie. Castellaneta lies in the heart of the Park of Ravines, a mix of natural environments made even more interesting by ancient ruins. North of Taranto, Martina Franca is a charming town that overlooks the Itria Valley, with its lush green nature contrasting with the white Trulli (limestone dwellings) and ancient farms that frame the old town’s Baroque architecture. 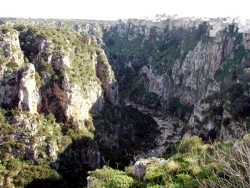 The Ravine of Laterza

Taranto was founded in 708 BC by Spartan immigrants, who named the city after the mythical hero Taras, shown in the coat of arms riding a dolphin. Taranto increased its power and became a major power, ruling over the Greek colonies in southern Italy under its statesman, Archytas. It also became the main center and commercial port in southern Italy, with the largest army and fleet of its time.

In the 8th. century AD,  Saracens began their raids against Southern Italy, occupying Taranto for forty years, until it was reconquered by the Byzantines in 880. The city suffered from other Saracen raids when the Saracens, led by the Slavic Sabir, conquered and destroyed the city, enslaving and deporting to Africa all the survivors. In 967 the Byzantine emperor Nicephorus II Phoca, realizing the strategic importance of the area, rebuilt Taranto. In the 11th. century a bloody struggle between Normans and Byzantines for the rule over the Tarentine and Barensis lands took plsce. Taranto was finally conquered by the Normans and became the capital of a Norman principality for almost 4 centuries. 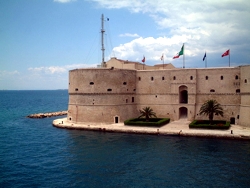 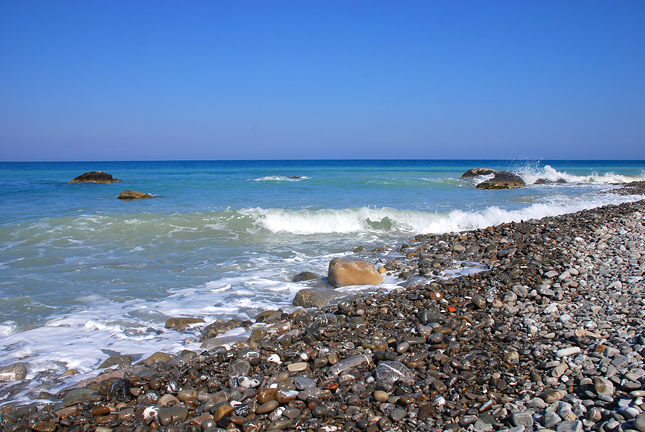 The Cuisine of Taranto

Seafood is a speciality in Taranto, and there are a huge number of excellent seafood restaurants throughout the region, many of which are family run, traditional Italian eateries. The most common meat on the menu is lamb, as elsewhere in the south: here it’s cooked Greek style, over a spit and scented with rosemary. Most of Italy’s fish comes from the coast, and specialities include roasted oysters with oil, lemon, garlic and marjoram, sea bream, and mussel and potato soup. Much seafood is eaten raw, with sardines, prawns and cuttlefish featured heavily.

Orecchiette (meaning ‘little ears’) pasta, made from flour and water, can be found everywhere in Puglia and it is not uncommon to see women sitting out in the street and making it during the day. This is teamed with sauces made from the abundance of vegetables grown locally. Much of Italy’s pasta is produced from the wheat fields of Puglia, as is excellent olive oil and vast quantities of sun-dried tomatoes. Taranto produces many varied wines, from red to white to sparkling wines, such as white Terra d’Otranto and Bianco di Train and reds, such as Castel del Monte Rosso. A wide variety of very sweet fruits round out the menu: grapes, oranges, and the famous clementines of the Gulf of Taranto.

Pugliese cuisine is based on olive oil, one of the great products of the region. In any given year, Puglia produces as much as two-thirds of all the olive oil in Italy, and while much of it is shipped north, more of it stays in the region to be used in Pugliese kitchens. Cooks in Puglia even deep-fry with extra virgin oil, something that comes as a surprise to Americans but is routine in many parts of the Mediterranean. Butter is rarely used in the traditional cuisine and even some sweets are made with olive oil and often fried. Sweets, moreover, are not an everyday occurrence but associated only with holidays, whether major ones like Christmas and Easter or minor ones like the Feast of the Dead (All Saints), Shrove Tuesday or locally celebrated ones like the feasts of St. Anthony Abbot and St. Joseph.

In this culture of sparsity, nothing is wasted. Stale bread is cut into cubes or crumbled and toasted in oil to make a garnish for pasta and vegetable dishes. Vegetables themselves, at the height of their season, are dried, pickled, or preserved in oil to use during the winter. Figs are dried or boiled down to make a syrup, and grape juice, after the first pressing, is boiled to make a thick molasses called mosto cotto, to be served at Christmas poured over fried sweets called cartellate.

Three dishes come to mind when one thinks of this cuisine:

1. ‘Ncapriata or fave e cicoria: A puree made from dried peeled fava beans (with or without a potato added), dressed olive oil and eaten with steamed bitter greens, preferably wild chicory.

2. Ciceri e tria: Homemade durum wheat pasta (no eggs) in the form of flat tagliatelle or noodles, cooked with chick-peas and mixed with about a third of the pasta that has been kept apart and fried in olive oil until it is crisp and brown.

It’s altogether likely that even five hundred years ago, the dishes on Pugliese tables were not all that different from what they are today, with one great exception the tomato. There are no early cookbooks to tell us when tomatoes were first introduced to Puglia, but it was probably after the explorers returned from America. Puglia’s tomatoes are sweet and acid, dense with flesh and bursting with juice. They are available year-round, fresh from the garden, sun-dried and packed in oil, put up simply in jars, whether whole or in a sauce, or strung in brilliant red clusters. 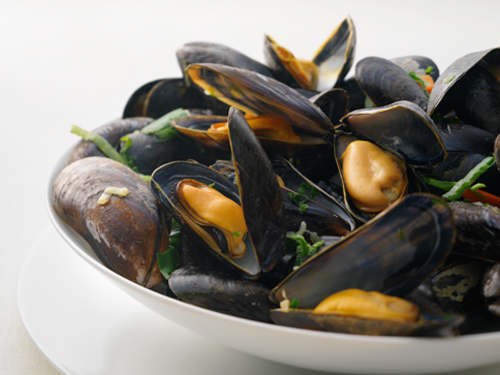 Peel the garlic, leave one clove whole and finely chop the remainder.

Heat the oil in a large saucepan, add the onion and cook gently for about 10 minutes, until very soft and transparent, stirring occasionally.

Add the chopped garlic and cook for several seconds.

Stir in the wine, parsley and pepper to taste, cover and simmer gently for 5 minutes.

Meanwhile, toast the bread under a low broiler so it crisps as well as toasts.

Halve the reserved garlic clove and rub over the toast. Keep warm in the oven.

Add the mussels to the saucepan and cook over a high heat for about 6-8 minutes, until they open, shaking to distribute the heat evenly. Discard any mussels that do not open.

Place the toast in wide soup bowls or pasta plates. Divide the mussels amongst the bowls and spoon over the liquid from the pan.

Sprinkle with parsley and serve immediately. 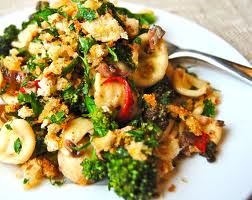 Pasta with Broccoli, Tomatoes and Almonds

Heat the oil in a pan and brown the chopped garlic, then add the minced anchovies.

Add the broccoli previously blanched in boiling salted water, then the tomato, and cook over a low heat for 5 minutes. Season with salt and pepper and drizzle with a little oil.

In a pasta pot containing boiling salted water, cook the orecchiette pasta, stirring from time to time to avoid them sticking to one another.

Grind some black pepper into the pan containing the broccoli, drain the pasta, leaving them slightly wet.

Add the pasta to the pan with the broccoli, mix well and pour into serving plates and decorate with slivers of  Pecorino cheese and slivers of almond. 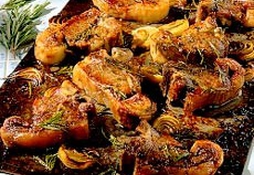 The meat and potatoes should he crisp and brown, with very little sauce.

Mix the potato chunks in a bowl with 1/4 cup of the olive oil, 1/4 cup of the parsley, and salt and pepper to taste. Toss to coat well, then spread over the bottom of a roasting pan or oven dish large enough to hold all the potatoes in one layer. Sprinkle about 1/3 cup of grated cheese over the top of the potatoes.

In the same bowl, mix the lamb chunks with the remaining 2 tablespoons of oil and 1/4 cup of parsley and more salt and pepper. Add the remaining cheese and the chopped garlic, again stirring to coat well. Arrange the lamb on the top of the potatoes.

Place the uncovered pan in the preheated oven and bake for 30 minutes. The lamb should give off a certain amount of liquid, but if the potatoes are so dry they’re sticking to the bottom of the dish, add a little boiling water. 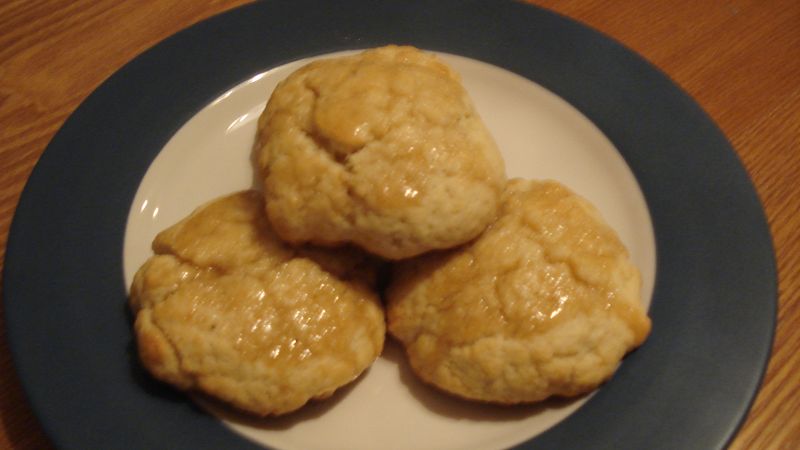 Heat 1 tablespoon of the milk over low heat or in the microwave. Add the butter and let it melt.

Pour the butter and milk mixture into the bowl of a electric mixer. Add the remaining milk, sugar, flour, baking powder, and 1/8 teaspoon of the vanilla. Knead until a smooth dough forms.

Grease a baking sheet. Form the dough into disks, about 2 inches in diameter and about 1/2 inch thick. Place on the baking sheet about 1 inch apart.

Bake until golden brown, about 12 minutes. Turn off the oven but do not remove the rolls from the baking pan.

In a saucepan, combine the powdered sugar with 1/2 cup water. Bring the mixture to a boil. Reduce the heat and let simmer for about 5 minutes until it begins to thicken.

Add the lemon juice, Amaretto, and remaining vanilla to the sugar mixture. Let simmer another 3 minutes. (The mixture will continue to thicken as you let it sit, so you can control how thin or thick you would like the glaze to be.)

Brush or drizzle the glaze onto the rolls. Put the rolls back into the oven with the heat off, but with the oven still warm, so that the glaze dries.