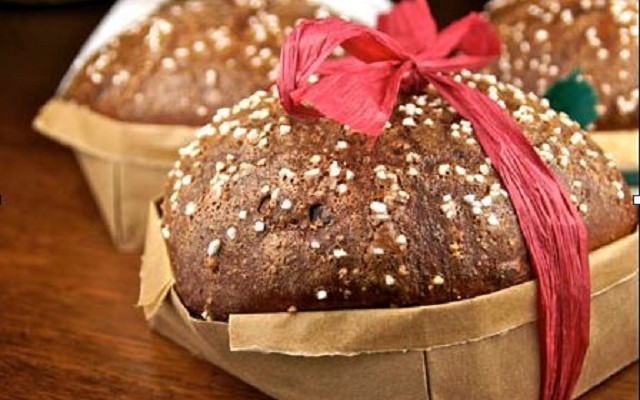 The Italian version of fruitcake is panettone, and although it does contain the candied fruits that can make fruitcake something to avoid, its airy texture and light sweet flavor make it more appealing than other fruitcakes. Traditional panettone, (yellow in color because it has butter and egg yolks in it) is studded with raisins and the candied peels of lemons and oranges. It’s cooked in a cylindrical paper and, when it rises, it puffs out of the top of the paper so that the end product looks like a muffin. While some fruitcake varieties incorporate alcohol into the recipe, panettone does not – but it goes quite well with a glass of sweet wine! 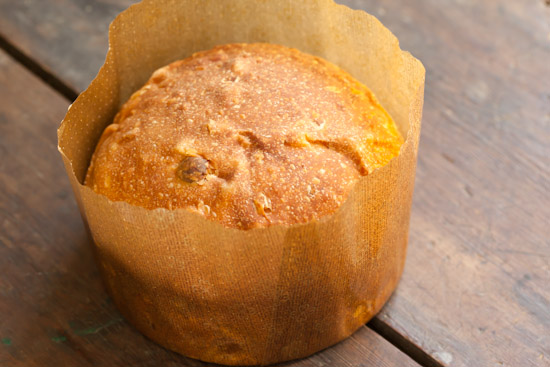 Panettone is more than just a Christmas bread. It is also a good story – or two – depending on whom you’re talking to. The legends behind the origin of this cake differ slightly, but all agree as to where it comes from – Milan. While the Ancient Romans were known to make sweetened bread, the origins of this particular recipe don’t go back quite that far.

The most commonly quoted legend behind panettone says that in the 15th. century, a man fell in love with the daughter of a baker called Toni. In order to win her heart and prove his love to her father, he came up with a bread recipe that included dried and candied fruits and called his creation “pane de Toni,” or Toni’s bread. Another story says the Christmas banquet given by the Sforza family had no dessert until a young kitchen hand baked up a sweet bread, thereby saving the meal – and yes, the kitchen hand’s name was Toni. Whether there is any truth to these legends is immaterial – the bread remains a part of the Christmas season in many Italian households.

Although panettone comes from Milan, it is now found throughout Italy. During the Christmas season look in any Italian bakery window and you’ll see brightly-colored packages ready for sale. You’ll even find mass-produced panettone in shops around the world, although the quality of these isn’t great. If you’re not in Italy and don’t have access to a good Italian bakery, you’re probably better off making your own panettone – especially since you can control exactly what goes into it.

Resource: Under the Tuscan Gun

In the weeks before Christmas, hundreds of millions of panettone are sold all over Italy, and throughout Europe, as well as in North America. That famous brightly colored box—oversized, festive and elegant—is an immediate cue that the holidays are here. Before industrialization, panettone (literally, “big bread”) was made in local bakeries or at home, and it was a laborious, time-consuming task. Traditionally, the father, or head of the household, would mark a cross at the top of the tall loaf of sweetened bread before it was placed in the oven, as a good omen for the coming year. And, still to this day, panettone retains a special aura, bringing a feeling of love, luck and joy whenever it is offered.

The special dough, similar to sourdough, slowly ferments and rises for at least 12 hours, but the leavening process can last much longer. Panettone ingredients are usually flour, eggs, butter, yeast, dried raisins, candied oranges, citron and lemon zest. Throughout Italy, bakeries still prepare it daily during the Christmas season for their customers. The quality of bakery-made panettone is usually excellent and is reflected in the price.

Panettone is eaten during the Christmas and New Year’s celebrations—which last for 10 days or so in Italy. Like the Christmas fruitcake so commonly offered by relatives, friends, colleagues and neighbors in the U.S., it is not uncommon for an Italian family to receive as many as ten or twenty loaves of panettone during the holidays. Many of these cakes are then passed on to other neighbors, or donated to less fortunate households or charities. Yet, like a favorite family relative who appears every Christmas, familiarity does not diminish the appreciation most people feel when panettone is offered—often brought along as a gift when invited for lunch or dinner during the holiday season, and presented with a good bottle of Spumante or Prosecco. 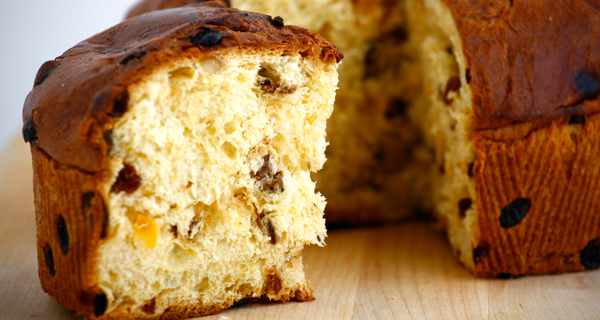 Traditionally, panettone is served after the enormous Christmas day feast or on Santo Stefano (that is, December 26th, a national holiday in Italy)—but also on New Year’s Eve and New Year’s Day. However, very few have any room left for dessert after these feasts, so panettone is saved to be eaten in the morning with caffe latte or cappuccino, or as a snack with an afternoon espresso. In the U.S. French Toast panettone is a breakfast favorite during the Christmas season.

The traditional dough for panettone is quite rich and contains plenty of butter and eggs. The addition of all the fat to the dough gives it a very tender texture. It can also weigh the dough down, so the bread is given a very long rise to ensure that it is fluffy, not dense, and rises up very high. Traditionally, the bread is baked in octagonal or hexagonal pans, but just about any shape or size can be used, even a bundt pan. Aside from the butter and eggs, most of the flavor of the panettone comes from the add-ins. The most traditional recipes have dried fruits, candied citrus, lemon and/or orange zest. These days, there is more variety and you might see chocolate chip panettone, or panettone soaked in rum for something a little more grown-up.

Making your own panettone gives you the liberty to include whatever fruits and nuts you like – including candied fruits if that’s to your liking. You can find the traditional papers that are used to bake panettone in specialty kitchen shops like Sur la Table or online (there’s a variety of sizes on the Amazon and King Arthur sites). This Christmas enjoy fresh sliced panettone with a sweet wine after dinner and the next morning have it toasted with your coffee. 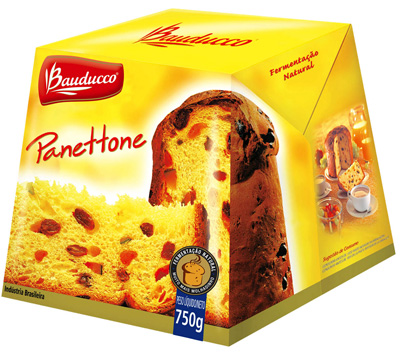 The Traditional Recipe for Panettone

Make the sponge: Place 1 1/2 cups flour, 2/3 cup water, 2 tablespoons apricot jam, and 1 teaspoon yeast in a small bowl and whisk together. Cover bowl with plastic wrap and set in a warm place to rest for 3 hours.

Make the dough: In the bowl of an electric mixer, add the sponge, 3/4 cup flour, 1/4 cup sugar, and 1 teaspoon yeast. Use the hook attachment to knead the dough until the mixture is smooth and stretchy, about 3-5 minutes.

Add 3 egg yolks, one at a time, and knead until dough is smooth, shiny, and stretchy.

Cover dough with plastic wrap and allow to rise in a warm place until doubled in size, about 2 hours.

Return dough to the mixer, and add salt, vanilla, lemon and orange flavoring, honey, and 1 teaspoon yeast. Knead for 1 minute.

Add 3 egg yolks and knead until incorporated. Add the 12 tablespoons of softened butter, one tablespoon at a time. Knead until dough is soft, shiny and very stretchy, about 5 minutes. Dough should pull away from the sides of the bowl.

Toss the chopped raisins, cherries and pecans with 2 tablespoons of flour. Add them to the dough and knead briefly, until just mixed in.

Place dough in a oiled bowl, cover with plastic wrap, and refrigerate overnight.

The next morning, turn the dough out onto a floured surface and shape into a ball. Place dough inside of a 6 inch diameter panettone mold, or use a clean, buttered coffee can lined with parchment paper. Make a small cross in the top of the dough with scissors.

Let dough rise in a warm place until triple in size, which may take several hours since the dough is cold from the refrigerator.

Preheat the oven to 375 degrees for 30 minutes.

Place the panettone in the oven, and lower the oven temperature to 325 degrees F.

Bake the panettone for about 1 hour, until it has risen high and springs back a little when pressed on top (like a muffin).

Let panettone cool in the pan on a rack.

Store panettone wrapped in plastic for up to 1 week.

Note: Traditional Italian panettones are made with a special flavoring called “fiori de sicila”, which you can purchase at gourmet stores and online. Use in place of the lemon and orange extract.

Here’s my healthy, quick and easy recipe for Panettone. 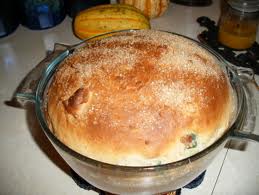 Panettone was not a popular sweet bread in my family. If someone gave my father a gift of this bread at Christmas, we would all groan. We didn’t even try to eat it and my mother would throw it out. Packaged panettone from Italy was the usual way this bread was given to us and it was not very good. Homemade can be a different story. I experimented on my children in the past and I changed many of the traditional ingredients to meet my children’s “sophisticated” tastes. The bread I developed probably shouldn’t be called panettone.

In a large bowl of an electric mixer with the paddle attachment, combine the yeast, warm water, sugar, eggs, vanilla, lemon, almonds, salt and butter; beat well. Gradually stir in the flour, adding just enough flour to make a soft dough. Transfer to the dough hook and knead, adding more flour if necessary, until dough is smooth. Place dough in a well-greased bowl, cover with plastic wrap or a towel, and let rise until doubled in bulk, about 30 to 45 minutes.

Punch dough down, place on well-floured work surface and shape the dough into a ball.  Place in a well-buttered 2-quart casserole dish. Set aside to rise until doubled in bulk, 30 to 45 minutes.