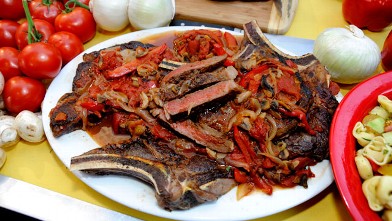 What, you may ask, is Steak Pizzaiola? What does this dish have to do with Pizza? It does share its tomato base with the pie but that’s about all. It’s a sauce that combines onions and garlic and sometimes pepperoncini—the pickled pepper of Italy or bell peppers. Then too, there’s the matter of geography. Pizza itself originated in Naples and was invented there in the late 1800’s. However, the creation of the recipe for Pizzaiola is claimed in several different regions depending on whose legend you are reading. It was probably developed in the Campania (Naples) region based on the use of the sauce. Pizzaiola was invented to tenderize tougher and less expensive cuts of beef. The meat is seared and then braised until tender. It is easy to make and is perfect for a weeknight.

Pizzaiola has probably been eaten in many Italian households without knowing what is was called.. While the basic sauce recipe calls for tomato and onion, in the true sense of Italian cooking, the recipe depends on what was in the refrigerator at the time. There is no one recipe for pizzaiola. My research finds that there are two different ways to approach this dish: braising a less tender cut of beef in the sauce or grilling a tender beef cut and adding the pizzaiola sauce.

During the 70s and 80s, many Italian-inspired regional dishes became popular in America and Steak Pizzaiola was one of them. 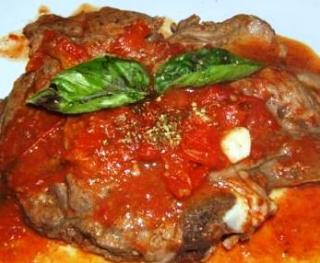 Any cut of beef that requires braising can be used. You can also braise the dish on top of the stove.

Season meat with salt and pepper.

Heat olive oil in a large skillet and add meat to pan and brown quickly on each side 3-5 minutes; do not crowd meat in pan. Remove meat from pan as it is browned and place in baking dish.

Add onions to the pan and cook until lightly golden in color, about 10 minutes, Pour onions on top of steak pieces in the baking dish.

Add tomatoes and water to the skillet stirring quickly reduce heat to low, add oregano and basil. Cook tomatoes for about 3 minutes. Pour over meat and onions. Cover dish tightly with foil and bake for 45 minutes covered. Remove foil or pan covering and cook an additional 20-30 minutes until tomatoes are cooked down. Good with angel hair pasta as a side. 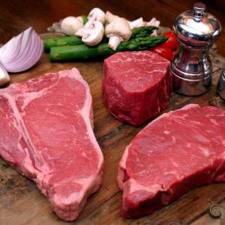 You can also pan sear the steak in a heavy skillet.

Heat the oil in a large skillet and let it heat until shimmering. Add the bell pepper, onion, mushrooms, and garlic and cook, stirring occasionally, until the vegetables are tender, about 6 minutes. Add the wine and bring to a boil. Stir in the tomatoes and oregano, and season with salt and pepper. Return to a boil. Reduce the heat to low and simmer until slightly thickened, about 5 minutes, adding a bit more wine if the sauce gets too thick. Remove from the heat. (The sauce can be made up to 2 hours ahead and reheated.)

Season the steaks with the salt and pepper. Let stand at room temperature while heating the grill.

Grill over high heat to medium or to your preferred level, turning only once. Remove from heat and rest rest five minutes. Slice steak into one inch slices and place steaks in the sauce and allow them to heat for a few minutes.