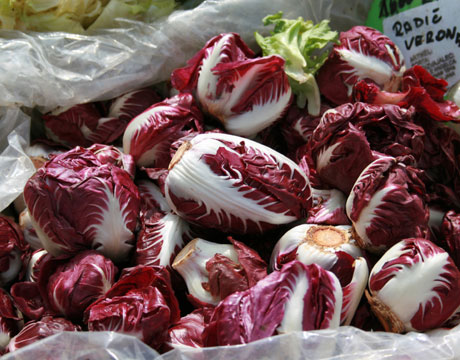 Ancient man consumed radicchio for its medicinal properties as a blood purifier and an aid for insomnia. Pliny, a Roman author and philosopher, mentions the red-lined lettuces of the Veneto region in his Naturalis Historia, noting that in addition to being tasty, they’re good for insomnia and purifying the blood. He also says, it was the Egyptians who bred radicchio from its more wild ancestor, chicory. In the Middle Ages it was especially popular among monks, who welcomed anything that would add zest and flavor to their simple vegetarian diets prescribed by their orders. Not that the plant was limited to monastic kitchens; it also figured prominently on the tables of nobles, both cooked and raw. In 1537 Pietro Aretino advised a friend, who had a garden, to plant radicchio, saying he much preferred it to “aroma-free lettuce and endive.”

The radicchio from that era isn’t the radicchio rosso we know today. The modern radicchio with its rich wine-red white-ribbed leaves was developed in the 1860’s by Francesco Van Den Borre, a Belgian agronomist, who applied the techniques used to whiten Belgian endive to the radicchio plants grown around Treviso. The process, which is called imbianchimento, is quite involved: the plants are harvested in late fall, their outer leaves are trimmed and discarded, and they are packed into wire mesh baskets where they stand for several days in darkened sheds with their roots bathed in steadily circulating spring water that emerges from the ground at a temperature of about 60 degrees F. As they bathe, the leaves of the hearts of the radicchio plants take on the pronounced wine-red color that distinguishes them (the deeper the red, the more bitter the plant). At this point the farmer unties the bunches, strips away the outer leaves, trims the root and sends the radicchio to the market. 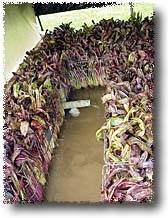 Modern cultivation of the plant began in the fifteenth century in the Veneto region of Italy. The varieties of radicchio are named after the Italian regions where they originated. Radicchio farmers in the Veneto region have sought to have Protected Geographical Status applied to the names of these radicchio varieties to keep them tied to their original growing regions.

Chioggia is the most common variety grown and identified in the United States with its maroon, round, grapefruit-size heads. Radicchio Rosso di Chioggia was bred from the Variegato and, while it has dark red leaves with white ribs, it is more round than the Radicchio di Treviso. It’s also compact and, as a result, it resembles a head of cabbage in shape. It’s now the most commonly grown radicchio rosso in Italy. 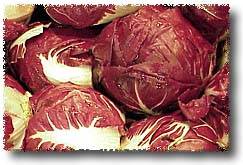 Treviso is an elongated version of radicchio resembling a large Belgian endive or a red romaine heart. Radicchio Rosso di Treviso comes in two varieties: Precoce, which has fleshy red leaves with white ribs that form a compact bunch and Tardivo, which has more pronounced ribs and splayed leaves. As you might guess, Precoce comes into season first  and, although it is prettier to look at, the Tardivo is more flavorful, with stronger bitter accents. Both Precoce and Tardico now enjoy IGP (Indicazione Geografica Protetta) status, which means that they can only be sold as such, if they are produced around Treviso, under the supervision of the Consorzio Radicchio di Treviso. 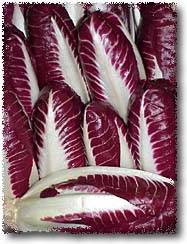 Tardivo and Castelfranco resemble flowers and are only available in winter months. Radicchio Variegato di Castelfranco also enjoys IGP status. It looks more like a traditional head of lettuce but has deep wine-red stripes, and is also known as the Edible Flower. It’s a cross between radicchio and a round-headed endive. 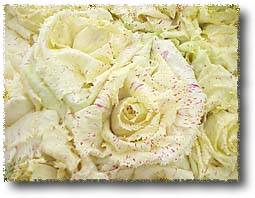 Radicchio, like most vegetables, is seasonal. It appears in the markets in late November and remains throughout the winter. It is tastiest after the frosts begin. It has also been introduced and is grown in California’s Napa Valley. Radicchio is quite popular in Italy and is gaining popularity in the United States for its versatility and nutrition.

It is also good for you! Radicchio’s bitterness is due to intybin, which stimulates the appetite and digestive system. Radicchio is high in antioxidants, loaded with fiber and contains high levels of Vitamins B, C, and K.

When you bring radicchio home from the market, put it in the crisper section of your refrigerator. It will keep for a couple of days and, if it looks slightly wilted, stand it in a glass of water — the tap root has nutrients that feed the leaves and can absorb water. I found that all greens survive longer in the refrigerator, if I wrap them, individually, in paper towels and place them in a ziplock plastic bag.  My lettuce lasts a good two weeks with this method. 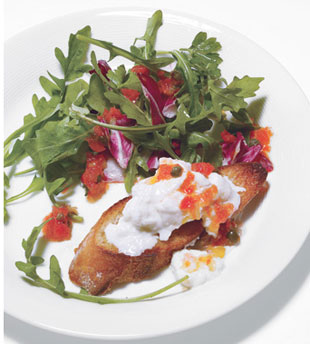 DO AHEAD: Can be made 1 day ahead. Cover; chill. Bring to room temperature and whisk before using.

Toast baguette slices; brush with olive oil. Top each toast with half of the burrata cheese; sprinkle with salt and pepper.

Combine arugula, radicchio, and parsley in medium bowl; toss with half of dressing. Divide salad between plates. Place 1 toast alongside each salad; drizzle with the remaining dressing.

As A First Course 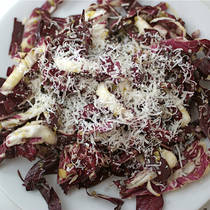 Trim radicchio and cut or tear into bite-size pieces. Put radicchio in a large salad bowl.

Mince olives and garlic into a paste and then mix with oil, vinegar or lemon juice. Add salt and pepper to taste. (You can also do this in a blender, if you like.)

Toss radicchio with the dressing. Serve topped with plenty of grated Parmesan cheese. 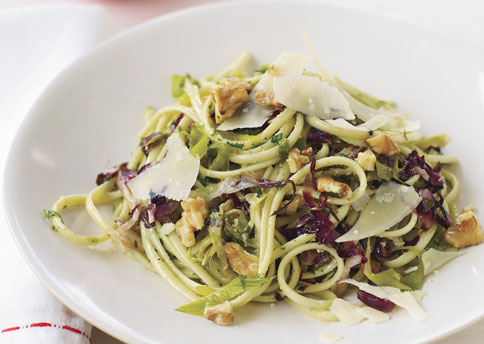 Drain pasta, reserving 1 cup cooking liquid. Add pasta, pesto, and radicchio to leeks; toss, adding cooking liquid by tablespoonfuls until the sauce is the consistency you like. Garnish with walnuts and shaved Parmesan.

As A Side Dish 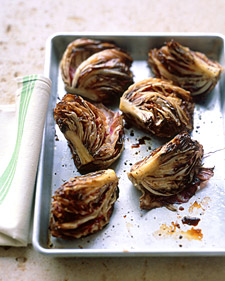 Roasting the radicchio mellows its slightly bitter flavor; balsamic vinegar adds a touch of sweetness. You can use either of the popular varieties of radicchio — round Verona Chioggia or slender Treviso — in this recipe, since they both yield delicious results. Serves 4

Preheat oven to 400 degrees F. Put radicchio wedges on a rimmed baking sheet. Drizzle with oil and season with salt and pepper. Toss gently to coat, and turn each wedge so a cut side faces baking sheet. Roast, turning once, until leaves are wilted and slightly charred, 12 to 15 minutes. Transfer to a platter.

Just before serving, drizzle vinegar over each wedge and garnish with cheese shavings.

As A Second Course 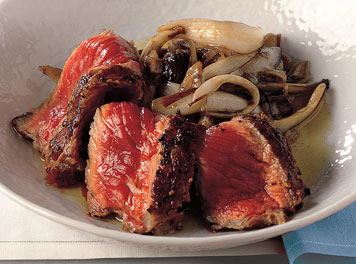 Beef Steak with Radicchio and Gorgonzola

FOR RADICCHIO: In a large nonstick skillet, heat oil over medium-high heat until hot but not smoking. Add radicchio, shallot and garlic; cook, stirring occasionally, until radicchio is wilted, about 3 minutes. Remove pan from heat, add cheese and stir to combine. Transfer mixture to a bowl; remove and discard garlic. Wipe out skillet.

Using same skillet, heat 1 tablespoon oil and 1 tablespoon butter over high heat. Cook 1 steak, turning once, about 7 minutes total for medium rare. Transfer to a cutting board and cover loosely with foil. Wipe out skillet and repeat with remaining steak. Let steaks rest 10 minutes, then slice. Serve with radicchio. 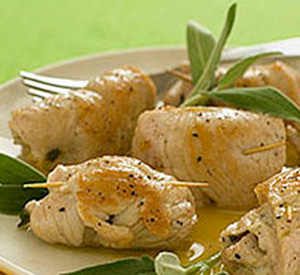 Sprinkle salt and freshly ground black pepper on each breast.

Spread a tablespoon of cheese in the center of each breast, keeping cheese away from edges.

Then lay a slice of radicchio on each breast.

Begin rolling breast from the narrow tip. This way you have more coverage when you finish the roll and insert the toothpicks (2 for each breast).

Once each roll is complete, heat 2 tablespoons of olive oil in a nonstick pan on medium heat.

Place chicken rolls in pan and brown on one side.

After a few minutes, check underside. Once well browned, turn rolls over and brown again.

After approximately 5 minutes, add white wine, cover and let rolls simmer. Some of the cheese will have melted out and mix with the wine and chicken juices to create a thick white sauce. If not, add a tablespoon of cheese to the simmering wine.