Choose Your Stuffing Or Is It Dressing? 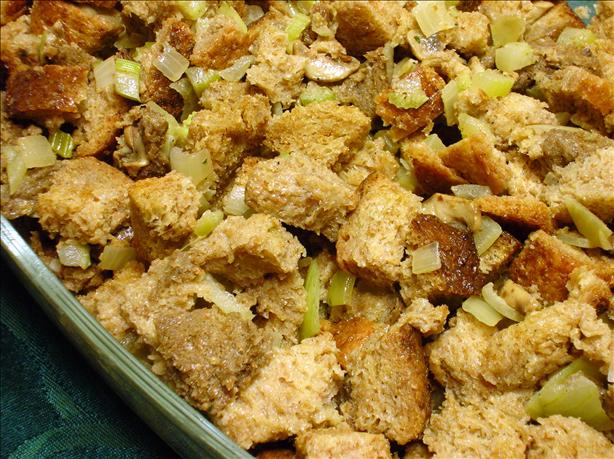 Thanksgiving Day Stuffing – Or Any Day

Stuffing, also called dressing depending on where you live, is a seasoned mix of vegetables and starches and sometimes eggs that are cooked within or alongside a meat entree. Some stuffing recipes utilize other meats, such as sausage (especially popular in Italian dishes) or oysters in their mix and vegetarian stuffing is usually based on bread, rice or potatoes.

Various kinds of stuffing go as far back as the Roman Empire , where recipes appear in De re Coquinaria , a collection found within a kitchen anthology called Apicius that chronicles thousands of Roman dishes. In De re Coquinaria , chicken, rabbit, pork and dormouse stuffing are included and there are long traditions and other historical references that corroborate the wide use of stuffing in Ancient Italy.

Since humans were thought to be stuffing small animals long before the days of the Roman Empire, it seems natural that the pilgrims might think to stuff a turkey. However, there is no historical evidence that stuffing was served at the first Thanksgiving, but the tradition has been long standing in America.

Stuffing is not uncommon, but is not regularly utilized in most households, other than during the Thanksgiving holiday. Turkey stuffing is the most widely used, and while many buy pre-packaged stuffing such as Stove Top, there are yet many varying family recipes that have endured over the years. Stove Top introduced boxed stuffing in 1972. It was home economist Ruth Siems who discovered how to manipulate bread crumbs in such a way that made reconstitution practical, and Stove Top, now owned by Kraft Foods, sells almost 60 million boxes of stuffing every Thanksgiving.

In Victorian England, “stuffing” became “dressing” and remained so in its emigration to America.  Now “stuffing” and “dressing” are used interchangeably in America, although some places, especially in the Midwest, still refer to the dish as dressing. The famous cookbook, “The Joy of Cooking”, says that a mixture is considered stuffing if you cook it inside the bird, and dressing if you cook it in a pan.

Other differences are in the ingredient choices which vary according to regional locations. The base is usually a crumbled bread product such as cornbread, biscuits or bread. Most call for chopped onion and celery. Some recipes call for sauteing the onions and celery until they are tender. Another key ingredient in almost every recipe is poultry seasoning.There are recipe variations that can include sausage, walnuts, cranberries and in coastal areas, oysters.

There is a health risk involved with placing stuffing inside the turkey cavity while it is cooked. The stuffing can develop bacteria if it is not cooked to 165 degrees. The problem is that it is possible for the thigh of the turkey (where you insert the thermometer) to register an internal temperature of 180 degrees while the stuffing may not be the same temperature. If the turkey stuffing has not reached 165 degrees it must be cooked longer, which can result in the turkey being overcooked.

When it comes to the texture of stuffing, there is no right or wrong way to make it. Some people like it dry and crisp; some like it moist and dense. Soft breads produce a dense, spongy stuffing; toasted breads produce a drier stuffing because the bread crumbs can absorb more juices without becoming soggy.

To get the consistency your family prefers, follow these simple suggestions:

If you like stuffing, you don’t have to limit it to holiday dinners. It bakes up just as well on its own as an accompaniment to chicken or other meats. Simply place stuffing in a greased shallow baking dish, cover with foil and bake at 325°F. to 350°F. for 1 hour or until heated through. For a crisper crust, uncover stuffing during the final 15-20 minutes of baking. 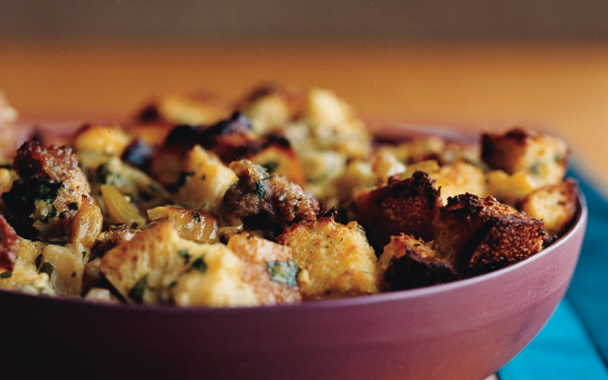 Pile the bread cubes into a very large bowl and set aside.

Spray a large sauté pan with cooking spray and set over medium heat. Add the sausage and cook, breaking up the sausage with a wooden spoon or spatula until light brown, about 5 min. With a slotted spoon, transfer the sausage to the bowl of cubed bread. Wipe out the pan and add the olive oil, onions, celery, and garlic  and saute until the onions are translucent and just beginning to brown, 8 to 10 min. Stir in the thyme, sage, salt, and peppers, cook 1 minute, and add the mixture to the cubed bread. Add some of the broth to the bread mixture; stir until well combined. The stuffing should just hold together when pressed together, if not add more broth.

If baking some or all of the stuffing in a casserole, pour a cup or two of broth over the stuffing to replace the juices the stuffing would have absorbed from the bird. Bake it covered until heated through, 45 minutes to 1 hour. For a crunchy top, uncover it for the last 15 minutes of baking. 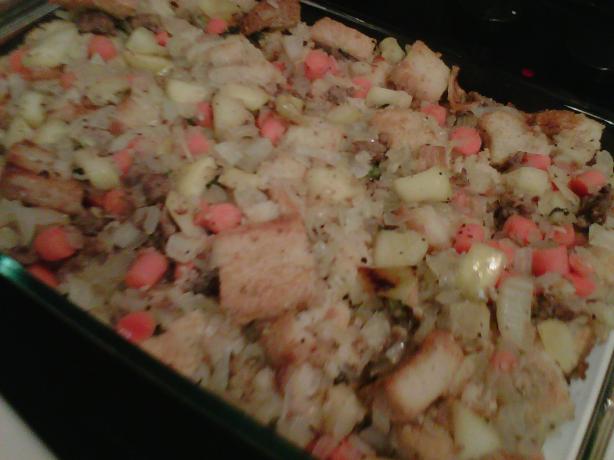 Arrange bread cubes in a single layer on a baking sheet coated with cooking spray. Bake for 16 minutes or until golden, stirring after 8 minutes. Place in a large bowl. On a separate baking sheet place pecans and bake for 6-8 minutes and add to bread cubes.

Combine broth and eggs in a small bowl, stirring with a whisk. Add broth mixture and remaining 1/4 teaspoon pepper to bread mixture; toss well to combine.

Spoon bread mixture into a 13 x 9-inch glass or ceramic baking dish coated with cooking spray. Cover with foil. Bake at 400°F. for 20 minutes. Uncover dish; bake for 20 minutes or until browned and crisp.

You can adjust oven temperature and baking time, if you are baking the stuffing alongside a turkey or you can stuff the turkey. 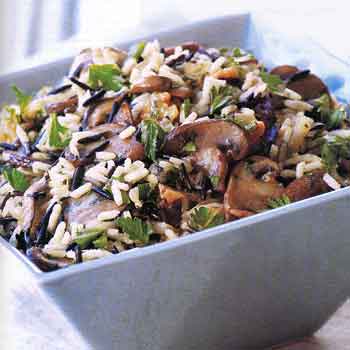 In same skillet in 1 tablespoon vegetable oil, cook mushrooms until golden brown and all liquid evaporates.

Stir long-grain rice, carrot mixture, and mushrooms into wild rice; over high heat, heat to boiling. Reduce heat to low; cover and simmer 20 minutes longer or until all liquid is absorbed and rice is tender. Stir in chopped parsley. Use to stuff 12- to 16-pound turkey or, spoon into serving bowl; keep warm. 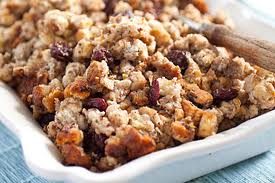 In a saucepan, saute celery and onion in butter until tender. Stir in thyme and poultry seasoning. In a large bowl, combine bread, dried cherries and celery mixture. Add broth and canned cherries; toss to mix.

Loosely stuff turkey just before baking. Skewer openings; tie drumsticks together. Place the turkey, breast side up, on a rack in a roasting pan. Brush with the olive oil.

Bake, uncovered, at 325°F. for 4 to 4-1/2 hours or until a meat thermometer reads 180° for the turkey and 165° for the stuffing. Baste occasionally with pan drippings. Cover loosely with foil if turkey browns too quickly.

Cover and let stand for 20 minutes before removing the stuffing and carving the turkey. If desired, thicken pan drippings for gravy. Yield: 10-12 servings (6 cups stuffing).

Note: The stuffing may be prepared as directed and baked separately in a greased 2-qt baking dish. Cover and bake at 325°F.for 50 minutes. Uncover and bake 10 minutes longer or until lightly browned.