The Cuisine Of Italy – Perugia

Perugia is the capital city of the region of Umbria in central Italy, near the River Tiber. The city is located about 102 miles north of Rome. It covers a high hilltop and part of the valleys surrounding the area.

The history of Perugia goes back to the Etruscan period. Perugia was an Umbrian settlement but first appears in written history as Perusia, one of the 12 confederate cities of Etruria. After the fall of the Roman Empire, Perugia was destroyed by Totila in 547; then it belonged to the Byzantine conquerors, and finally it became a powerful independent city allied to the Papal State.

The 14th century was characterised by violent struggles between Nobles (Beccherini) and Populars (Raspanti) and by the war against the Pope who wanted the Umbrian cities to be under his rule. The war ended with the Peace of Bologna in 1370, when Perugia was forced to recognize the Papal authority.  However, the city continued to be divided by rival factions fighting for power for many years after. In 1540 Perugia was placed under the direct control of the Papal State. The papal rule continued until the formation of the Kingdom of Italy in 1861.

Perugia today is a modern and cosmopolitan city known all over the world because of its cultural events and the universities. 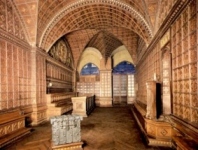 The piazza is surrounded by splendid buildings, and in the center stands the FONTANA MAGGIORE: a beautiful medieval fountain that was erected in the second half of the 12th century.

Perugia is a well-known artistic center of Italy. The famous painter Pietro Vannucci was a native of Città della Pieve near Perugia. He decorated the local Sala del Cambio with a beautiful series of frescoes; eight of his pictures can also be admired in the National Gallery of Umbria. Perugino was the teacher of Raphael, the great Renaissance artist who produced five paintings in Perugia and one fresco. Another famous painter, Pinturicchio, lived in Perugia. Galeazzo Alessi is a famous architect from Perugia. The city symbol is the griffin, which can be seen in the form of plaques and statues on buildings around the city. 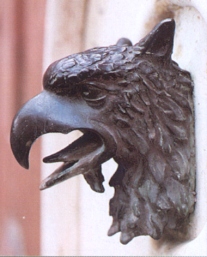 city symbol is the griffin

Annual festivals and events include: the Eurochocolate Festival (October), the Umbria Jazz Festival, and the International Journalism Festival (in April). 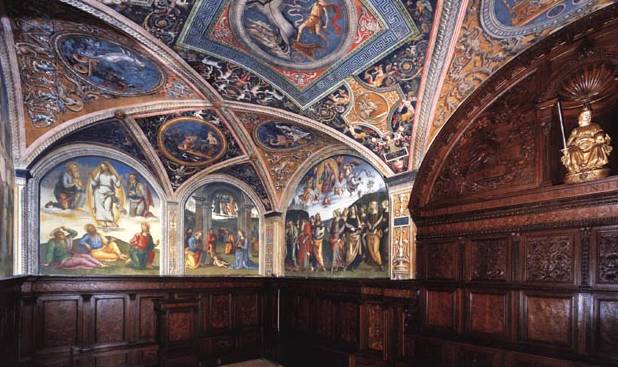 The Food Of Umbria

Often called the green heart of Italy and home to many of the country’s most famous hill towns, Umbria is a rolling patchwork of olive groves, vineyards, fields, and forests. Food here is hearty and simple, and meat reigns supreme, especially pork and game, such as boar and hare. The pork butchers of Norcia are famous for their sausages and salumi. Umbrian food is a cuisine of the hearth, with meats and sausage slowly roasted or grilled over a wood fire. Black truffles appear in autumn, contributing flavor to pastas and other dishes. Like the Tuscans, Umbrians like their bread sciapo, or “unsalted” a fitting complement to the often highly salted food of the region. Notable Umbrian wines include Orvieto Classico, a renowned white, and Sagrantino di Montefalco, a lush, full-bodied red.

Porchetta, a regional specialty that is now found throughout central Italy, is made from a whole pig that is boned, stuffed with garlic and herbs—usually fennel and rosemary—salted liberally, and slowly roasted until the skin is golden and crisp and the meat tender and juicy. Because home ovens are not large enough to hold a whole pig, the job is left to professionals, who sell porchetta by the slice in freshly made sandwiches at local markets and along roadsides.

Porcini mushrooms with a meaty consistency, are roasted or sauteéd and tossed with pasta. Lentils, Italy’s most famous tiny legumes, are grown in the high plains of Castelluccio.

The Perugina candy company takes its name from its hometown, Perugia, the region’s capital. 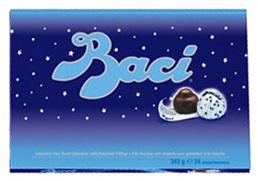 In November 1907, a group of four men in Perugia (including the son of the man who started the Buitoni pasta company) founded the “Perugina Confectionary Society” (Società Perugina per la Fabbricazione dei Confetti) and opened their doors in the historic center of town. The Perugina chocolate company, as it’s known today, grew steadily, but it wasn’t until 1922 that Perugina started producing the treat that is now known as – Baci.

Baci, those bite-sized chocolates with a whole hazelnut at their center, were the brainchild of the wife of one of the Perugina founders, a woman who had been instrumental in the company’s recipes and product line since the beginning. She first called her new candy “cazzotto,” or sock, but one of the other founders decided “baci,” or kisses, sounded more delicious. And those little love notes included in every Baci wrapper? They were there from the very beginning. (As a side note, purists may be dismayed to learn that Perugina was acquired by Nestlè in 1988. 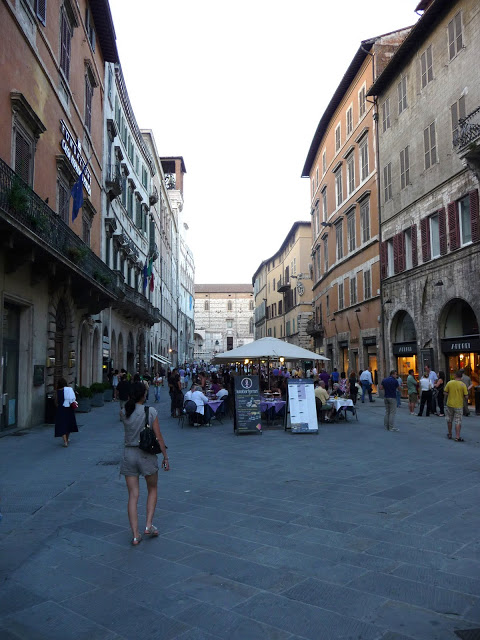 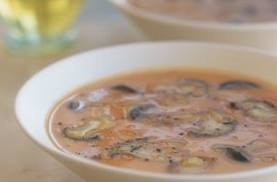 1. Pick over the chickpeas and discard any misshapen beans or stones. Rinse the chickpeas under cold running water and drain. Place in a large bowl with cold water to cover generously and let soak for at least 4 hours or for up to overnight. Drain the chickpeas, rinse well, and transfer to a large saucepan. Add 8 cups cold water and bring to a boil over high heat, skimming off the foam that rises to the surface. Reduce the heat to low and simmer, uncovered, until the chickpeas are tender, about 2 hours. Remove from the heat. Drain.

2. In a soup pot over medium-low heat, warm the olive oil. Add the onion, garlic, and rosemary and sauté until the onion is softened and translucent but not browned, about 6 minutes. In a small bowl, dissolve the tomato paste in 1 cup warm water and add to the pot. Stir in the chickpeas and season with salt and pepper. Bring to a simmer over medium heat and cook for 3 minutes. Add the stock, return to a simmer, and cook, uncovered, until the flavors have melded, about 30 minutes longer. Remove and discard the rosemary sprig.

3. Process the soup in the pot with an immersion blender. Return the soup to a simmer over medium heat, add the farro, and cook until the farro is tender yet still slightly firm and chewy, about 25 minutes.

4. Meanwhile, to prepare the mushrooms, cut away the tips of the mushroom stems. Thinly slice the mushrooms lengthwise. In a large, heavy-bottomed frying pan over medium heat, warm 1 tablespoon olive oil. Add the garlic and sauté until fragrant, about 1 minute. Add the mushrooms and cook, stirring with a wooden spoon, until they begin to soften, 3-4 minutes. (They might stick to the pan for a moment before beginning to release their juices, but it is not necessary to add more oil.) Raise the heat to high, add the wine and thyme, and cook, stirring constantly, to cook off the alcohol from the wine, about 3 minutes. Reduce the heat to low, season with salt and pepper, and continue to cook, stirring often, until the mushrooms are cooked and their juices have evaporated, about 15 minutes longer. Remove from the heat and discard the thyme sprig. Stir in the butter.

5. Add the mushrooms to the soup and stir to combine. Ladle the soup into warmed soup bowls, garnish with a drizzle of olive oil and a sprinkling of freshly ground pepper. 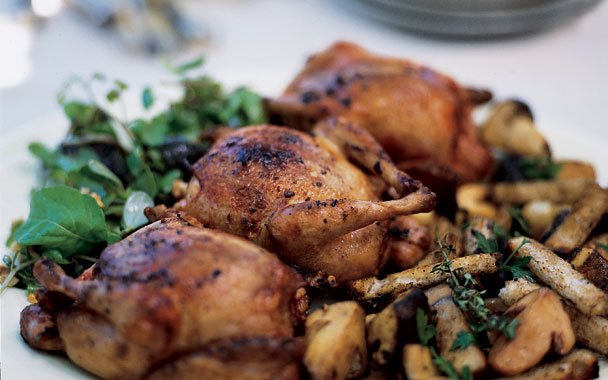 Squab in the Umbrian Style

I substitute Cornish Game Hens for the Squab. A side of sauteed mushrooms goes very well with this entree.

Serves 4-8, depending on whether you cut the hens in half.

Rinse the hens and dry well inside and out. Use kitchen string to tie the legs of each hen loosely together.

In a heavy-bottomed, wide, deep skillet or Dutch oven large enough to accommodate the 4 birds, warm the oil and garlic together over medium-low heat. Sauté until the garlic is golden, about 4 minutes. Remove and discard the garlic. Tie the sage and rosemary sprigs together with kitchen string and add to the pan along with the cloves and lemon zest. 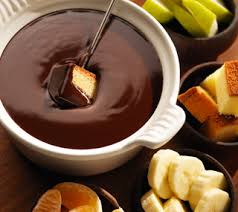 Slice the bananas and pears into wedges and rub with sliced lemon to keep them from turning brown. Take care not to use too much lemon as it will alter the flavor of the fruit.

Melt the chocolate pieces in a double boiler. Remove from heat and add the rum and the warmed heavy cream.

Serve the chocolate sauce in a ceramic (or clay) bowl and arrange the fruit around it.