The Cuisine of Italy – San Marino

San Marino was founded in 301 C.E. (A.D.) by a Christian stonemason, Marinus, who fled the island of Arbe to escape the anti-Christian persecution by the Emperor. Taking refuge on Mount Titano, Marinus founded a small community for Christians. In memory of Marinus, the area was named the Land of San Marino, then the Community of San Marino, and finally the Republic of San Marino. The state of San Marino was able to maintain its independence despite frequent invasions and in 1291 Pope Nicholas IV recognized San Marino as an independent state.

The territory of San Marino consisted only of Mount Titano until 1463 when the republic joined an alliance against Sigismondo Pandolfo Malatesta, Lord of Rimini. As a reward for Malatesta’s defeat, Pope Pius II gave San Marino the towns of Fiorentino, Montegiardino, and Serravalle. In the same year the town of Faetano voluntarily joined the young state. The nation has remained the same size ever since.

San Marino has been occupied by invaders only twice, both for short periods of time. In 1503 Cesare Borgia occupied the country until the death of his father, Rodrigo Borgia, Pope Alexander VI. The political unrest that followed the Pope’s death forced Cesare Borgia to withdraw his forces from San Marino. In 1739 Cardinal Alberoni, in an attempt to gain more political power, used military force to occupy San Marino. However,  civil disobedience and clandestine communications with Pope Clement XII helped to ensure recognition of San Marino’s rights and restoration of its independence. Since 1862 San Marino has had an official treaty of friendship with Italy. 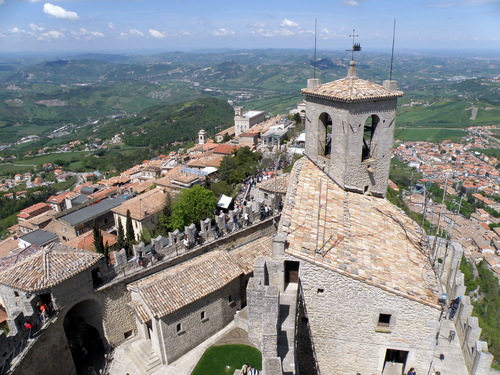 San Marino is tiny at only 24 square miles, and there’s very little about stepping into the Republic from Italy that would make you feel like you’ve left the country that surrounds it. This is, however, the oldest surviving sovereign state and constitutional republic in the world.

San Marino is made up of a few towns dotted around the mountain sides. The capital of San Marino is itself called ‘San Marino’ and is situated high up on a mountain top. The capital is surrounded by a wall and three distinct towers that overlook the rest of the country. The towns surrounding the capital are more industrial than the main city.

San Marino has a Mediterranean climate – the warm summers and the mild winters being the most typical features. Although the steep slopes, cliffs and castles of San Marino are impressive, what really takes your breath away is the view from the town. On a clear day you can see the Adriatic Sea a few miles to the east, and in other directions the hilly land rises into central Italy where it is possible to make out small hill-top villages and other castles and fortresses.

The most popular sport in San Marino is, without a doubt, soccer and the San Marino national team has been taking part in international competitions since 1986. 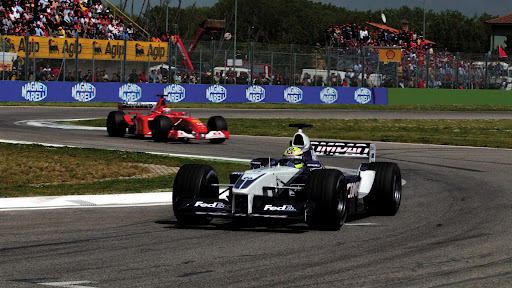 The Food Of San Marino

Food and meals are an important part of life in San Marino. The cuisine is Mediterranean, emphasizing fresh and locally grown produce, pasta, and meat. Although it is similar to that of the Italian Romagna region which borders San Marino, the cuisine of San Marino features its own typical dishes. Popular local dishes include bustrengo, a cake made with raisins; cacciatello, a dessert made with milk, sugar and eggs, similar to Crème caramel ; and zuppa di ciliege, cherries stewed in red wine and sugar and served on local bread.

San Marino also produces high quality wines, the most famous of which are the Sangiovese, a strong red wine; and the Biancale, a dry white wine.

There are many small family-owned restaurants, often providing outdoor seating in the summer, which play an important role in the lives of the Sanmarinese, as meals are a daily part of family life and socializing.

This is the famous cake, Torta Tre Monti, from the Republic of San Marino, that is completely hand made at La Serenissima, an ancient cake factory, located in San Marino.

The cake consists of five layers of round wafers filled with chocolate and hazelnut cream and topped with a rich dark chocolate. It has a very delicate and crispy taste. It is still made with the same original techniques that have been used since 1942.

Here is a video on how this cake is made:  http://www.laserenissima.sm/eng/index.asp 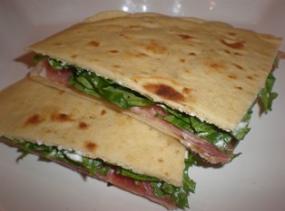 Piadina with Ricotta, Prosciutto and Arugula

Piadina can be made with any filling ingredients that you like or normally put into a sandwich. The bread is usually a flatbread and, unless you want to make the bread from scratch, I recommend the pita as a good substitute. Tortillas are sometimes recommended but, I think, they are too thin.

Preheat the oven to 225°F. Heat a stove top griddle or skillet until hot. Brush both sides of each pita round very lightly with oil and grill over moderate heat, turning once, until brown marks appear on the bread’s surface, 3 to 4 minutes. Wrap in foil and keep the breads warm in the oven while you cook the rest.

In a small bowl, season the ricotta lightly with salt and pepper. In a medium bowl, toss the arugula with the 1 tablespoon of oil and the lemon juice and season with salt and pepper. Arrange breads on a work surface and spread each with 1/4 cup ricotta on one side of the bread. Top with prosciutto slices, followed by the arugula salad. Fold the uncovered side of the  bread over the filling and cut in half. Serve warm. 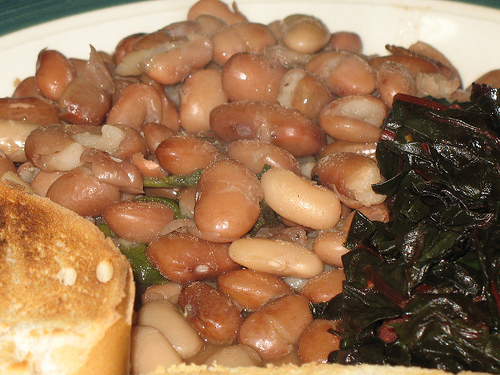 Preheat the oven to 325°F. In a 3 or 4 quart heavy-bottomed, oven-proof, lidded pot such as a Dutch oven, heat the olive oil over medium heat. Add the pancetta and cook slowly until lightly browned and crispy.

Add the chopped onions and increase the heat to medium-high. Cook, stirring often, until the onions begin to brown. Use a wooden spoon to scrape any browned bits off the bottom of the pot.

Add the garlic, crushed red pepper flakes and sage and cook for 1-2 minutes, then add the honey. Stir well to combine. Add the marinara sauce and the stock. Bring to a simmer; add salt to taste and the drained beans. Stir well. Cover the pot and cook in the oven for an hour and fifteen minutes. If there is too much liquid in the beans after this time, remove the cover and cook for 15-30 minutes more or until desired consistency. 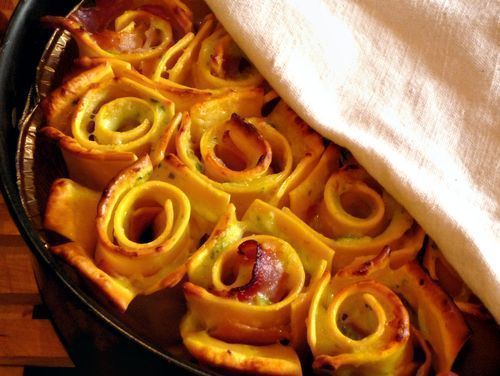 Nidi di Rondine -” Swallow’s Nests” is a popular pasta dish in San Marino. It is a quick way of making a filled pasta. It is pretty and looks difficult to make but isn’t ! The classic rosettes are filled with a little bechamel sauce sprinkled with Parmigiano-Reggiano and topped with sliced cooked ham and fontina cheese.

To make the Bechamel:

Whisk milk and flour in a saucepan together, add butter and place pan over moderate high heat.

Keep whisking until sauce thickens. Season with salt and the 2 tablespoons of grated Parmigiano-Reggiano cheese.

To pre-cook the pasta:

Cook just 3 lasagna pieces at a time in salted boiling water. Remove with a slotted spoon and place on kitchen towels. Turn them over to dry on both sides.

To fill and assemble the Rosettes:

Coat the bottom of a large baking dish with 1 cup of the marinara sauce.

Spread a thin layer of béchamel on the pasta pieces, then sprinkle with grated Parmigiano-Reggiano cheese and place slices of prosciutto or ham and cheese on top.

Roll up each in piece into a cylinder. Place them close together cut side up in baking dish.  Continue the process until the dish is full – if you have space left use crumpled balls of foil to fill in the space and keep the rolls upright.

Use kitchen scissors to nick the rolls in a few places and pull out pasta “petals” turning them down a little so they stay open during baking. See picture above.

Dot the top of the pasta roses with the remaining marinara sauce and sprinkle with Parmigiano-Reggiano cheese. Bake for 30 minutes or until the top of the “roses” are crisp and golden.