Essentially, a stew is any combination of two or more ingredients, cooked slowly in a liquid. Before the invention of pottery, ancient people were using turtle shells and large mollusk shells for stewing. Cooking became easier after the development of pottery and there have been many references to stew throughout history. The first actual recipe for a stew, a ragout, can be found in a 14th century French cookbook.

Every culture has its own version of stew. The traditional Irish stew consisted of mutton and root vegetables. After the Irish immigrated to North America, the Irish stew was made with better cuts of meats and Guinness stout. The benefits of stewing are numerous. In times of famine and hardship, it was a good way to make a substantial meal out of available ingredients with the cheapest cuts of meat. Stewing makes otherwise tough cuts edible, and also disguises their appearance in the gravy. How else could you serve an oxtail? Goulash has sweet paprika; Bourguignon has red wine, the New England Boiled Dinner is corned beef, onion and cabbage. But they are all stews.

Stewing is a great way to free you from the kitchen while dinner cooks. It is also a good way to make use of your crock pot. The longer, slower cooking allows all of the flavors to develop and mingle. In fact, many stew lovers would argue that the stew is better the second time it is heated up, which makes it a great meal, when you have a large crowd coming and you need to get all of your preparations done the day before. The very best part is that there is only one pot to clean after dinner.

Italian stew is usually a main dish and is often served in a bowl alongside bread. Some stews are served on top of polenta. Italian stew is usually one of two things: a meat with or without vegetables or a chunky sauce to pour over Italian pasta dishes. Common stews served in Italy include osso buco, stracotto, and spezzatino. These dishes are served year-round in Italy, becoming more common in wintertime, especially around Christmas. The sauce in Italian stew can range in texture from thin, watery broth to a thickness similar to mashed potatoes. Typical Italian stews are simply meat braised in broth or wine over low-heat. Italian stews can also contain any type of meat and/or vegetables and can be made on the stove, in the oven, or in a slow cooker. Vegetables used in this type of stew can be numerous, but, most often, include carrots, celery, and fennel. Potatoes, onion, and garlic are also common additions depending on the region of origin. Italian stew, sometimes, contains beef, but other meats are more typical, such as, chicken, pork, or veal. Rabbit is a popular stew meat in Northern Italy and sausage is a common stew meat in southern Italy.

Many Italian stew recipes that are popular did not actually originate in Italy. Since the cuisine of Italy has been influenced by nearby cultures, typical stews in Italy, include some that originated in Hungary and Croatia. The Italian stew called jota containing beans, bacon, garlic, potatoes, and meat, originally came from Croatia. In countries other than Italy, particularly in the United States, some dishes labeled as Italian stew are simply pasta dishes with Italian flavors that have been converted into stews, generally by reducing the broth or thickening the sauce in the mixture and adding pasta. 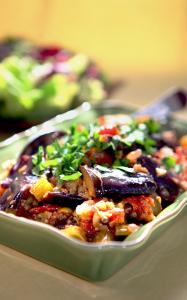 This stew of eggplant and vegetables is usually prepared agrodolce meaning sweet and sour because of the addition of  sugar and vinegar. However, like so many traditional dishes, there seems to be an infinite number of variations. Usually the savory mixture contains tomatoes, capers, and olives along with the eggplant. In some areas of Italy, potatoes, fish, anchovies, pignoli nuts, raisins, bell peppers, asparagus or carrots might be included.

In a large, deep skillet or Dutch Oven (large enough to hold the cut eggplant in a single layer), heat the remaining 1 tablespoon olive oil over medium-low heat. Add the eggplant and cook, stirring often, for 20 minutes or until the pieces are golden brown and tender. Season with salt. Remove to a separate bowl.

Add 1 tablespoon of the olive oil to the pan and heat over medium-high heat. Add the onion, garlic, potatoes and celery and cook, stirring often, for 7 to 10 minutes or until the vegetables are tender when pierced with a fork. Add the tomatoes, capers, and olives. Simmer over medium-low heat for 10 minutes. Add the eggplant to the tomato mixture. Turn the heat to medium. Add the vinegar and sugar and continue cooking, stirring constantly, for 5 minutes more. Taste for seasoning and add salt, if needed.

Chop the basil and parsley together. Stir them into the eggplant mixture.

Chicken Stew with Olives and Lemon 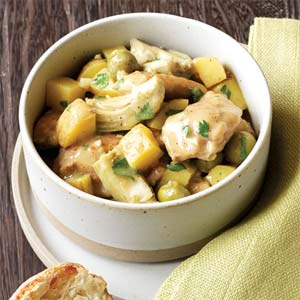 In a resealable plastic bag, combine flour, salt, and pepper.

Cut each chicken thigh into 2 or 3 chunks. Add chicken to the plastic bag, seal, and shake to coat.

Heat oil in a large pot over medium-high heat. Add chicken (discard excess flour) in a single layer and cook, turning once, until browned, 4 to 5 minutes total. Transfer to a plate.

Reduce heat to medium. Add garlic, capers, and lemon zest and stir just until fragrant, about 30 seconds. Add wine and simmer, scraping up browned bits from bottom of pan, until reduced by half, about 2 minutes. Add broth, potatoes, and chicken and return to a simmer. Lower heat slightly to maintain simmer, cover, and cook 10 minutes.

Add artichokes to the pan and stir. Cover and cook until potatoes are tender when pierced, 8 to 10 minutes. Stir in parsley, lemon juice to taste, and olives. Season with additional salt and pepper to taste. Serve hot, with lemon wedges on the side. 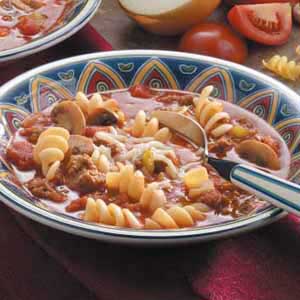 In a large saucepan or Dutch Oven heat oil and brown the sausage. Drain the sausage on paper towels. Add the onion, green pepper and garlic to the pan and cook for 5 minutes. Add the tomatoes, mushrooms, water, broth and wine. Bring to a boil, add pasta and browned sausage to the pan. Reduce heat; cover and simmer for 1 hour. Top each serving cheese. 8 servings. 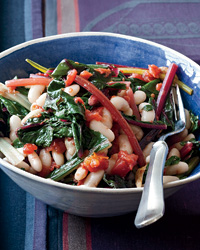 Bring a saucepan of water to a boil. Add the chard and simmer over moderate heat until tender, 8 minutes. Drain the greens and gently press out excess water. 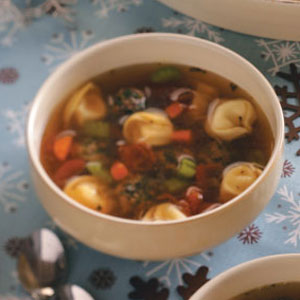 In a large bowl, combine the egg, spinach, bread crumbs, salt and

In a large saucepan or Dutch Oven, brown meatballs in batches in the 1 tablespoon oil. Remove meatballs to a bowl and cover with foil to keep warm.

Add onion to the pan and saute for 2 minutes. Add celery and carrots; saute 2 minutes longer. Stir in the broth, beans, tomatoes, basil and oregano. Add meatballs; bring to a boil. 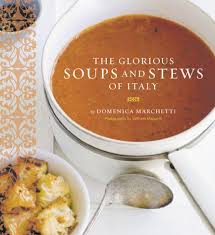