What Can I Do With Artichokes? 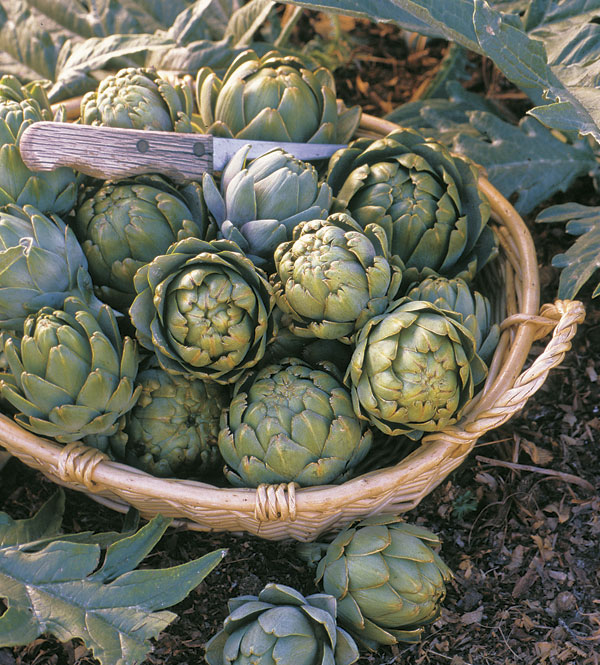 “According to an Aegean legend and praised in song by the poet Quintus Horatius Flaccus, the first artichoke was a lovely young girl who lived on the island of Zinari. The god, Zeus was visiting his brother Poseidon one day when, as he emerged from the sea, he spied a beautiful young mortal woman. She did not seem frightened by the presence of a god, and Zeus seized the opportunity to seduce her. He was so pleased with the girl, whose name was Cynara, that he decided to make her a goddess, so that she could be nearer to his home on Olympia. Cynara agreed to the promotion, and Zeus anticipated the trysts to come, whenever his wife Hera was away. However, Cynara soon missed her mother and grew homesick. She snuck back to the world of mortals for a brief visit. After she returned, Zeus discovered this un-goddess-like behavior. Enraged, he hurled her back to earth and transformed her into the plant we know as the artichoke.”

Beginning about 800 A.D., North African Moors begin cultivating artichokes in the area of Granada, Spain, and another Arab group, the Saracens, became identified with artichokes in Sicily. This may explain why the English word artichoke is derived from the Arab, “al’qarshuf” rather than from the Latin, “cynara.”  Between 800 and 1500, the artichoke was improved and transformed, perhaps in monastery gardens, into the plant we would recognize today.

Artichokes were first cultivated in Naples around the middle of the 15th century and gradually spread to other sections of Europe. After Rome fell, artichokes became scarce but re-emerged during the Renaissance in 1466 when the Strozzi family brought them from Florence to Naples.

In the 16th century, Catherine de Medici, married to King Henry II, is credited with making artichokes famous. She is said to have introduced them to France when she married. They were later brought to Louisiana by French colonists and to California in the Monterey area by the Spaniards in the late 1800’s.

In 1922 Andrew Molera, a landowner in the Salinas Valley of Monterey County, California, just south of San Francisco, decided to lease his land, previously dedicated to the growing of sugar beets, to Italian farmers that he encouraged to try growing the “new” vegetable. His reasons were economic, as artichokes were selling at high prices and farmers could pay Molera triple what the sugar company did for the same land.

In Italy, artichokes (carciofi) are served in a myriad of forms and preparations—fried, baked, braised, boiled and frittatas. Sometimes the same recipe can be served as an antipasto, a side dish (called a “contorno” in Italian) or as a first course (the “primo”)—for example, Carciofi al forno con patate, which is a combination of roasted artichokes and potatoes. For main dishes artichokes go very well with roasted meat or fish; they are also used as a main ingredient in pasta sauces and risotto. Carciofi gratinati (baked artichokes with melted cheese and breadcrumbs) is a typical dish in many parts of the central southern regions of Italy. Artichokes are often combined with other ingredients like cheese, ground meat and béchamel, and then baked. One of the most popular artichoke dishes comes from an old Roman Jewish recipe, called Carciofi alla Giudea, in which the artichokes are deep fried and served with lemon.

Fresh: Artichokes should be firm and heavy for their size, with the outer leaves just beginning to open. Store unwashed, sprinkled with water and refrigerated in airtight bags for up to a week. 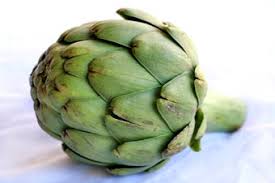 Canned: Artichoke hearts in cans are usually packed in brine. Their soft texture makes them ideal for creamy dips and casseroles. Rinse and pat dry before using to remove any excess salt. 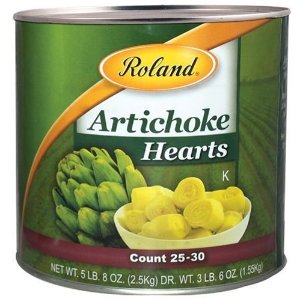 Marinated: Hearts marinated in oil and dried herbs (like oregano and thyme) have a strong flavor. Use them in a recipe only if specifically called for, as they can overpower a dish. They can be used in salads, or as a pizza topping or added to a sandwich. 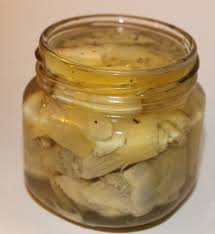 Frozen: Artichoke hearts from the freezer case are the healthiest option after fresh as they have no added calories or fat. They’re only partially cooked, so they keep their texture better than canned or jarred when they’re roasted or sautéed. Thaw and pat dry before using to avoid ending up with too much liquid in your dish. 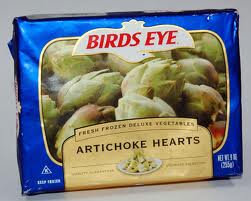 Personally, I only use fresh or frozen artichokes because I do not care for the additional ingredients in the canned and marinated products. I can easily make marinated artichoke hearts with the frozen product by defrosting the artichoke hearts and dressing them with my own fresh dressing. (See recipe below) No additional preservatives here. They are also a great, healthy convenience food. Traditional cooks make their own artichoke hearts by trimming fresh artichokes down to the heart but this is a very time consuming preparation.

How To Select Artichokes

Choose globes that are dark green, heavy, and have “tight” leaves. Don’t select globes that are dry looking or appear to be turning brown. If the leaves appear too “open” then the choke is past its prime. You can still eat them, but the leaves may be tough. (Don’t throw these away. They can be used for artichoke soup). Artichokes are available throughout the year with the peak season being from March to May and a smaller crop in October.  It is best to use them within 4 days of purchase.

How To Eat an Artichoke:

Pull each leaf off the choke and hold the pointed end between your fingers and drag the leaf between your teeth. Most of the edible portion is on inside bottom 1/3 of the choke leaf. When you serve artichokes, put a bowl on the table for the discarded leaves. Once you’ve eaten all the leaves you’ll see the heart or flower of the choke. The rest of the base of the choke is edible, referred to as the heart.

How To Clean and Prepare Artichokes For Stuffing

2. Cut off the stem and pull off lower petals which are small or discolored. 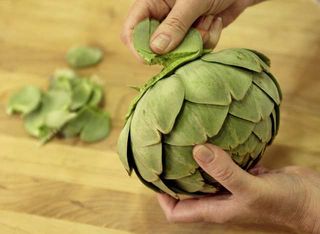 3. Cut stems close to the base.  Use a stainless knife to prevent discoloration. 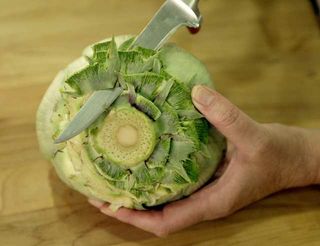 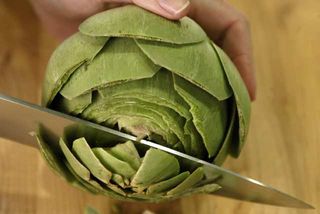 5. Using a pair of kitchen scissors, cut off the sharp points from the leaves. 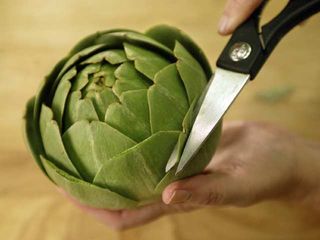 6. Open up the artichoke so that you can see the purple-topped leaves. Pull out the purple leaves. Use a serrated spoon to scrape the fuzzy choke out of the artichoke heart: 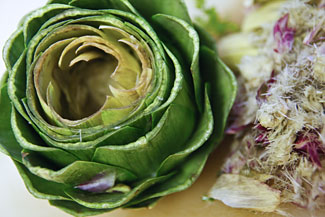 7. After you have scraped out as much as you can, rinse the artichoke well and either rub it with lemon juice or dip it in a combination of lemon and water to keep the cut edges from becoming brown.

8. Stuff the artichoke leaves right over the bowl. Starting at the bottom, working your way up and around until you get to the top, tighter leaves. Gently pull out each leaf and use your hand to scoop some of the mixture into the leaf. 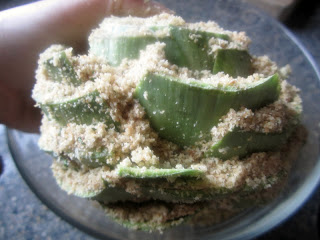 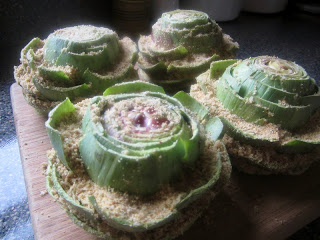 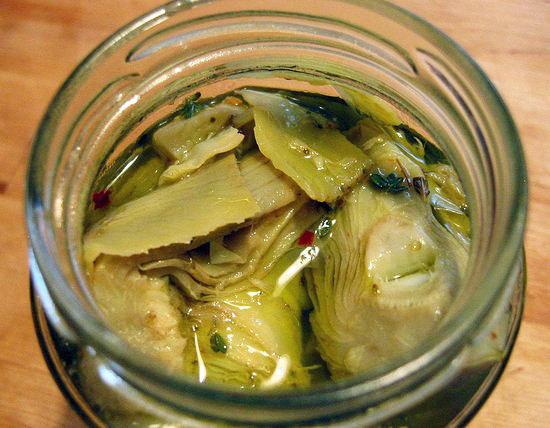 2. Let cool to room temperature and stir in lemon juice. Serve or refrigerate in a covered container for up to 1 week. 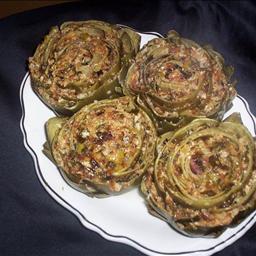 This makes a wonderful appetizer that can be prepared in advance.

Heat oven to 400 degrees F. Fill a large bowl with water and squeeze juice from the two lemon halves into water. Cut off artichoke stems, peel them with a vegetable peeler, rub them all over with remaining lemon half (this prevents browning) and drop them into water.

Use a heavy, sharp stainless knife to cut the top 1 1/2 inches off an artichoke. Pull out the pale inner leaves from center. At the bottom, where the leaves were, is a furry bed, the choke. Use a spoon (a grapefruit spoon works well) to scoop out choke.

Next, using kitchen shears or a pair of scissors, trim the pointy ends from outer leaves of artichoke. As you work, rub a lemon half over cut parts of artichoke. When you are finished trimming, drop the artichoke into the bowl of lemon water. Repeat with remaining artichokes.

Holding artichokes over the stuffing bowl, stuff choke cavity and in between the leaves with bread crumb mixture. Stand stuffed artichokes upright in pan and generously drizzle olive oil over the center of each artichoke.

Fill the baking pan with water until it reaches 1/4 way up the artichokes. Add wine and remaining salt and pepper to water. Cover pan with foil and poke several holes in the foil. Bake artichokes for about 1 1/2 hours, or until tender; when done, a knife should slide easily into an artichoke and a leaf should pull out easily.

Heat oil in a large skillet over medium heat. Add onions and cook until tender. Add artichokes, garlic, lemon juice, salt and pepper and cook until artichokes are tender, 7 to 8 minutes. Add wine and simmer until just thickened. Stir in reserved 1/4 cup pasta water, sun-dried tomatoes and thyme; then add pasta, salt and pepper and toss well. Transfer pasta to bowls, garnish with cheese and serve. 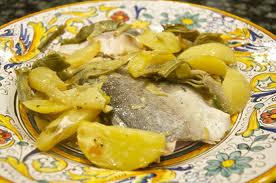 Fish Fillets with Potatoes and Artichokes

In a large bowl combine the artichokes, potatoes, garlic, rosemary, basil and salt and pepper to taste. Add 2 tablespoons olive oil and toss to coat.

Place the potato mixture in a large ovenproof baking dish, add the fish stock, and cover with aluminum foil. Bake for 35 to 45 minutes, or until the potatoes are soft. Spoon out a quarter of the vegetables into a bowl. Reserve.

Season the fish with salt and pepper and rub the fillets with the remaining olive oil. Arrange the fillets on the potato and artichoke mixture and add the wine. Cover the fish with the reserved potato mixture. Bake, uncovered, for 10-15 minutes, or until the fish is cooked through. 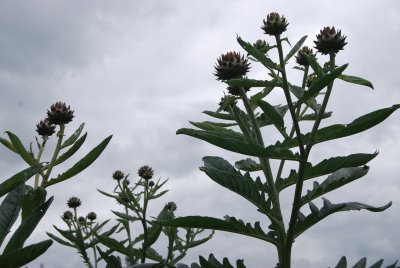