The Cuisine of Italy – Pisa 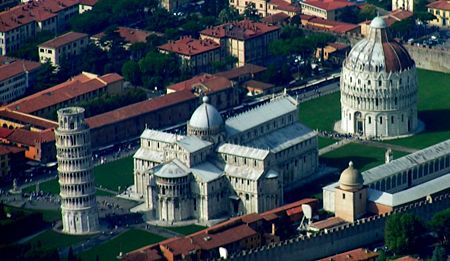 The Campo dei Miracoli from above. The leaning tower is on the left, the Duomo is in the center and the Baptistery is on the right.

Legend says it was mythic Trojan refugees from Greece who founded Pisa. The City of Pisa was first settled in a region of Italy that was relatively uninhabited at the time. Of course, ” Italy ” wasn’t around then, and Pisa was a Roman settlement. As a coastal town, Pisa was an important Roman port and merchant center. Pisa existed long before the Roman empire though, and in ancient Roman texts, Pisa is called an old city. 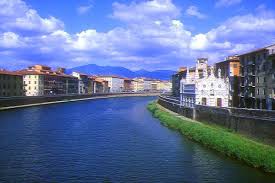 A city of Etruscan origin, Pisa reached its highest splendor in the 11th century, when it became one of the four influential Italian Maritime Republics along with Genoa, Venice and Amalfi. During most of the Middle Ages, it dominated the western Mediterranean Sea. The construction of what would become the city’s most famous monuments: the Duomo of Pisa, the Leaning Tower and the Monumental Cemetery began during that time.

The Tower of Pisa leans sideways because it was built on unstable soil. In 1173 construction started on the 180-foot bell tower and the building began to lean as soon as the first three floors were completed. Nevertheless, building continued and the seven-story structure was finished between 1360 and 1370. The tower continued to lean a little bit more each year and was closed for repairs in 1990, when it was leaning fourteen and one-half feet to one side. Engineers worked to stabilize the foundation, straightening the tower only slightly to help prevent irreparable damage without taking away the uniqueness of the structure. 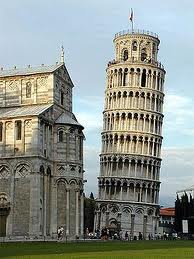 Most often Pisa acted as a commercial center for the region but, during times of war, Pisa was able to maintain control of the Mediterranean Sea with its formidable fleet of warships. The Romans used the port of Pisa to launch naval attacks against the Gauls, Ligurians and Carthagenians.

Pisa was a wealthy city with colonies in northern Africa, in southern Spain and along the southern coasts of Asia Minor. The 1284 war with Genoa marked the beginning of Pisa’s decline. Florence conquered Pisa in 1406, however, under Medici rule, the city flourished and commissioned the new construction, such as, the University that later attracted Galileo Galilei, the famous astronomer, physicist, mathematician as department chair.

The City of Pisa, as we know it today, is the result of many global influences that affected the entire world, not just Italy and the surrounding areas. World War II took its toll on the city, damaging many of the famous buildings and historic areas. However, both residents of the City of Pisa and Italy itself have beautifully restored Pisa to a state that is modern and functional, as well as historic.

The interior of the Duomo in Pisa

The Cuisine of Pisa

The cuisine in Pisa offers lots of variety and taste, as diverse as the lands around it. From the sea to the farmland and on to the hilly landscape dominated by grain, olives and grape vines to the rugged, wooded landscape.The many restaurants in the historic center offer typical dishes from Pisa, as well as fine, protected products, such as Monte Pisano olive oil, Pecorino cheese, Parco di Migliarino lamb, Pisan beef, San Miniato truffle, pine nuts, mushrooms, Pisanello tomatoes and much more. Tuscan bread, made without salt, is an essential element of Pisan cuisine and the base of many canapés which are served as appetizers.

Pisa’s cuisine varies from fish and seafood specialties to game dishes. A typical dish of the area is a simple soup called “Sullo Scio” prepared by frying some garlic, rosemary and peeled tomatoes in oil, adding water, broken up tagliatelle (wide pasta noodles) and served with Parmesan cheese. Mushrooms are an important feature in Pisa’s cuisine and they can be eaten simply sliced and dressed in a salad or in more elaborate pasta sauces.

As far as desserts, a particular mention goes to “Torta con i Bischeri”, a pastry based tart filled with rice cooked in milk and flavored with lemon, vanilla and nutmeg with the addition of chocolate pieces, candy fruit, raisins and maraschino liqueur. Desserts are based on the traditions of the poor and are made with dried fruit, chestnuts, pine nuts, chocolate and wine.

In the past, one of the great traditional specialties was “Cee alla Pisana” or baby eels, caught in the River Arno. According to this recipe, the eels were sautéed with garlic, olive oil, sage and Parmesan cheese, but they are no longer allowed because“cee” fishing is now prohibited. Local fish dishes usually include leeks or chickpeas and are served with a sweet-and-sour sauce or an onion and tomato sauce. Chickpeas are widely used, especially to make cecina, a flat bread snack, very similar to the Genovese farinata ( a thin, crisp, pizza-like pancake) made with chickpea meal cooked in copper baking-tins in a wood-burning oven. 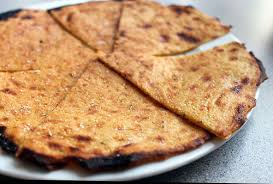 Vegetables grow in abundance here, given the mild climate of this part of Tuscany, and are used mostly to make quiche and frittatas. Beans are widely used. Bordatino, a soup made of red beans, black cabbage and corn meal, octopus and beans and  tuna bean salad are some of the dishes in which they feature beans. Fresh pasta dishes seasoned with sauces made from game and poultry such as boar, hare and duck are also popular.

From the local peasant heritage come recipes like Maggese, made with diced pig shoulder and Pecorino cheese, pig’s cheek mousse to spread on warm toast, and Testicciola alla Pisana, the head of a calf or lamb cooked in water with spices and herbs, boned and seasoned with capers, anchovies, pickles, salt, pepper and olive oil.

Finally, the province of Pisa also includes among its varied resources a flourishing wine-making industry that produces DOC and IGT wines (meaning a wine produced and guaranteed to be from a specific area). Typical local wines include the Chianti Colline Pisane (protected by the DOC label), Bianco Pisano di San Torpé, Colli dell’Etruria Centrale, Montescudaio and and Vin Santo.

Pisa Inspired Recipes For You To Make At Home 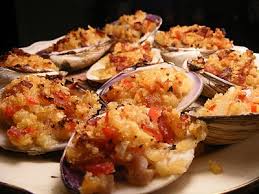 Scrub the clams to remove exterior dirt and place them in a large bowl along with cold water and the cornmeal or flour. Let soak 10 minutes. Scrub each clam clean under cold running water to remove remaining softened dirt from the shells and return to soak in fresh cold water. If necessary, repeat the scrubbing process a couple of times until the clams are completely clean and the soaking water is free of sand. Drain and chill until ready to cook.

In a deep skillet with a tight-fitting lid, bring the wine to a boil. Add the cleaned clams, cover immediately, and steam until the clams are open, 3 to 5 minutes. Discard any clams that do not open. Using tongs, remove the shellfish from the pan to a bowl. Reserve the cooking liquid in the pan.

Leave the whole clam meat in one of its shells and discard the other shell half.

Spoon equal amounts of topping on each clam. Drizzle reserved clam liquid over the topping and  place the clams in a flameproof baking dish, 9 inches from the broiler.

Broil for about 6 minutes, watching carefully to be sure the topping does not burn. If it browns too quickly, move farther from the flame and add a little more clam liquid or wine before returning them to the broiler. Serve hot with lemon wedges. 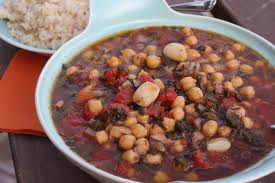 Drain the chickpeas from their soaking water and place in a medium-size saucepan with several inches of water to cover. Bring to a boil and cook over medium-high heat until soft but not breaking apart, about 2 hours, uncovered or partially covered. Drain, reserving 1/ 2 cup of the chickpea cooking water.

In a large nonreactive skillet, heat the olive oil over medium-high heat, add the onion and celery and cook until softened, about 4 minutes, stirring frequently. Reduce the heat to medium-low, add the garlic, tomato paste and tomatoes with their juices, and simmer 10 minutes, stirring a few times. Add the chickpeas and their reserved liquid and cook another 10 minutes. Add the beet or mustard greens and cook until heated through, an additional 10 minutes, seasoning with salt and pepper. Gently turn several times to mix the ingredients.

Toast the bread, set it in soup bowls, and ladle the chickpeas and their broth over it. 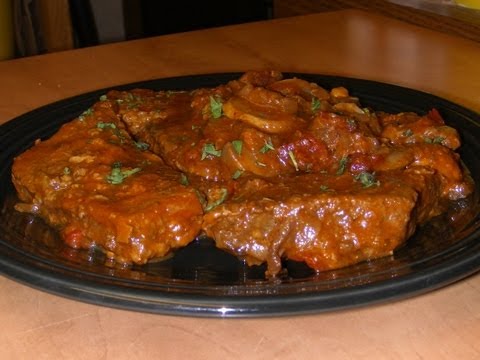 Trim fat from round steak and cut meat into 4 serving-size pieces. Heat oil in a large skillet. Add meat pieces to skillet and brown both sides of each piece. Remove meat from skillet.

Add mushrooms, onion, green pepper, celery, and garlic to the skillet. Cook until vegetables are nearly tender. Then, stir in undrained tomatoes, herbs, and red pepper. Add meat to skillet, spooning vegetable mixture over the meat. Cover and simmer about 1-1/4 hours or until meat is tender, stirring occasionally.