When many of us think of swordfish, we think..well, isn’t it endangered? The answer — at least for American swordfish — is no!

It is true that swordfish stocks were low in the 1980’s and early 1990’s, but, now, North Atlantic stocks are on the rebound and environmental watchdog groups list them as a “good alternative.”

Under an international rebuilding plan for swordfish, the United States implemented a number of management measures to reduce the amount of fishing, to protect undersized swordfish and to allow the swordfish population to grow and rebuild. Fishermen, managers and scientists worked together to develop new management measures that reduced the impact U.S. fishery had on marine animals, making it one of the most environmentally responsible industries in the world. The North Atlantic swordfish rebuilding program is one of the great success stories in fishery management.

As for Pacific swordfish, they were never in trouble — especially in the waters around Hawaii. They get an “A” rating as a sustainable seafood choice by groups like the Monterey Bay Aquarium. You should buy swordfish that has been caught off the coasts of America because the technique used for catching imported swordfish is controversial and unregulated.

The swordfish is found in oceanic regions worldwide, including the Atlantic, Pacific, and Indian Oceans. It is found in tropical, temperate, and sometimes in cold waters. The swordfish is a highly migratory species, generally moving to warmer waters in the winter and cooler waters in the summer. Swordfish have been prized since men first set to sea and Sicilian fishermen still put to sea on open boats, calling out in an Ancient Greek dialect, they believe capable of drawing the fish within range of their hand-thrown harpoons. Swordfish is very popular in Italy, especially in the southern regions.

Swordfish is one of the most powerful fish in the ocean. Elusive and combative, the swordfish is prized by recreational anglers. Its name comes from its long, flat, sword-like bill, which is larger than those of other billfish species. When hooked and brought near the boat, the swordfish aggressively wields its bill, forcing anglers to use extreme caution to avoid being injured.

Like other billfish, females grow larger than males. Swordfish feed near the surface at night on squid and other small fish and, during the day, they move into deeper water to feed on larger fish that they stun with their slashing bill. Swordfish generally live about nine years, although, some have lived to 15 years. Fully grown, they can exceed 14 feet in length. Sexual maturity occurs between five and six years. In the Gulf of Mexico, spawning takes place year-round, and peaks from late April to July near the Gulf’s Loop Current.

Because of their size — the average swordfish weighs about 110 pounds — they’re sold as steaks, and while this makes cleaning and boning quite easy, it also means that an unscrupulous fishmonger may be tempted to pass off other steaks, in particular dogfish, as swordfish. For this reason fishmongers usually put the head on display when they set out swordfish steaks. How to be certain it’s swordfish? The spine is true bone, not the cartilage of a dogfish, and there will be an X of darker flesh bracketing the vertebra. Swordfish is popular because of its mildly sweet flavor, moist, meaty texture and moderately high fat content. It is an excellent source of selenium, niacin and vitamin B12.

Swordfish is made for the grill. The meat is so firm it that appeals to many who do not like fish. The texture, also, helps prevent the steaks from falling apart on the grill.

A typical swordfish meal is prepared with a simple olive oil-based marinade, grilled and served simply with lemon, salt and herbs. Good swordfish needs nothing more than this.

Cook swordfish like you would a rare steak: Use high heat to sear the outside and let it stay a little rare in the middle.

Make sure to leave the skin on when you grill, but take it off to serve: The skin is rubbery, but helps to keep the fish moist.

Swordfish is also an excellent stewing fish because it won’t fall apart. Use it for a fish chowder, or as a component in Cioppino or another fish stew or slowly simmer it in tomato sauce.

Swordfish is also good in a salad such as a Nicoise or even a classic tuna salad.

When choosing swordfish, look for the little strip of dark meat to be red, not brown. If it’s brown, the meat is old. Know that East Coast swordfish tends to be a little rosier than Pacific swordfish due to their diet. Tightly wrapped swordfish freezes well for about 3-4 months; beyond that goes downhill fast.

A few of my favorite ways to prepare swordfish are included here for you to try. The recipe for the dish pictured at the top of the post, Swordfish Marinara, is just below.

Heat 1 tablespoon olive oil over medium heat in an oven-proof skillet. Add the onion and garlic and saute until softened about 5 minutes. Add the tomatoes and bring to a boil. Lower the heat and simmer for 20-25 minutes until the sauce thickens. Stir in olives, crushed red pepper flakes, pine nuts, basil, oregano, wine and salt to taste.

Preheat the oven to 450 degrees F.

Sprinkle swordfish with sea salt and pepper. Place fish in the tomato sauce and top each with 1/4 cup of the breadcrumb mixture. Place skillet in the oven and bake for 15-20 minutes or until swordfish is cooked to your liking..

Serve with pasta or crusty Italian bread and a salad. 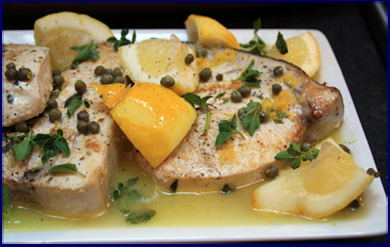 Combine the flour, pepper, and salt in a shallow dish such as a pie plate. Dredge the swordfish slices in the flour mixture and shake off any excess.

Add the garlic to the skillet and cook until fragrant, 30 seconds to 1 minute. Add the lemon juice and wine to the pan and deglaze, scraping up any browned bits. Bring to a boil, turn heat to low and add the capers. Adjust the salt seasoning to taste. Return the swordfish to the skillet and let the fish cook for a few minutes so that it can absorb the flavors of the sauce. Sprinkle with the parsley and serve at once, garnished with lemon. 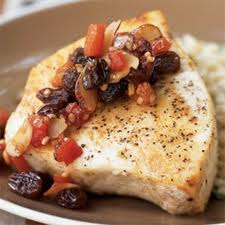 Heat a large nonstick skillet over medium-high heat and add olive oil. Sprinkle fish evenly with salt and black pepper. Add fish to the pan and sauté about 5 minutes on each side or until fish flakes easily when tested with a fork. Remove fish from pan; cover and keep warm.

Add garlic and crushed red pepper to the pan and sauté for 30 seconds. Add raisins, orange juice, olives, roasted pepper and onion to pan and cook for 1 minute. Top fish with sauce and serve. 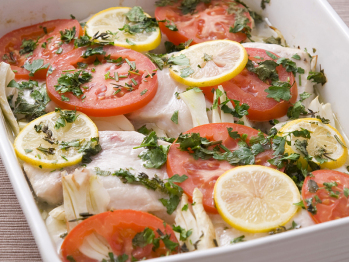 Place the swordfish on top of the fennel in a single layer. Top with the tomato and lemon slices. Mix the parsley, oregano, rosemary, and thyme together and sprinkle over the fish. Pour the wine and the oil over the fish. Cover with aluminum foil.

Bake for 15–20 minutes, or until the fish is cooked and flakes with a knife. Serve with the pan juices poured over the fish.